Zen by the Mandovi

One Goa port-soaked afternoon, I signed up for karate lessons and my daughter sniggered. A year later, as I scales walls Crouching Tiger style to save stranded cats, I’m the ‘cool’ dad. 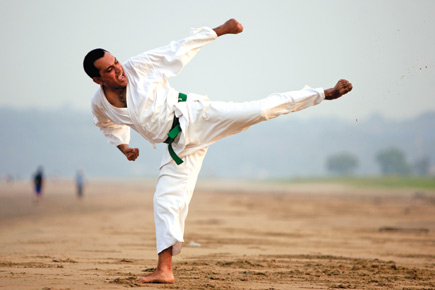 When I signed up for karate lessons, my daughter sniggered. A year later, I’m the ‘cool’ dad.


It must have been the wine. Or, the wine and the rain. Perhaps, it was written that a 44-year-old journalist on a sabbatical as an author would take to the martial arts despite resounding laughter from his child. So be it.

The day karma came into play, it was getting to be late afternoon in the Goan village home of a lawyer and political aspirant. The rain came down in sheets. The luncheon included a well-known tiatr actor singing paeans to the lawyer’s three children—for playing football, playing the keyboard and doing well in math—and then to the lawyer for being a good, even astounding, lawyer. His wife, of course, went unsung. The brass band broke into a flourish of welcome as minor and major politicos walked in and out. After a bit of voyeuristic pleasure, it was deathly boring.

The gentleman to my right appeared to be equally bored. He asked me my occupation. I told him that for the afternoon, I was a wine-drinking gypsy in love with the rain and the impossibly green paddies just across the lane. He laughed. Then I asked him what he did. He mentioned that he taught karate.

“Will you please teach me?” I said before my ageing nerves could connive to clamp shut my jaw. I sensed in some way a recessed thought from not too long ago: of learning that a Mumbai lady called Gospi Kapadia began to learn karate in her 40s (and continues, to this day, a practicing 4th dan black belt, at 65). How wonderful, I had thought at the time; I wish I could, some day. It didn’t seem as welcoming that rain-swept afternoon, suspended between heaven, earth and utter ennui. Too late.

“See you Friday,” he replied, eyeing my glass of sickly-sweet Goan port. “Six am. The oratoria at Don Bosco School in Panjim.”

To my complete surprise, and his, I was there at six sharp. Over the next one and a half hours, I nearly blacked out twice. He let me sit out for several minutes to catch my breath and arrest a spinning head, as my fellow students, all above 30 in age, went about their business. I was the oldest. It was humiliating. It was revelatory: oops, see who’s hit the middle ages. I dragged myself back up and lurched through the remainder of class.

“See you Monday,” my former lunch companion said after we were done. I had discovered he was a black belt in the medium grades—dan. A big enough potato in the karate hierarchy. “You will hurt,” said Joseph, who I would now call sensei, Japanese for teacher. “But try to show up.”

That weekend was a blur of protesting joints and rediscovered muscles. Bruce Lee, the monks of Shaolin, impeccable—and impossible—Japanese punctilio of blinding white gi and precise bows, even the teenaged neighbourhood bullies who pretended to be killer-artists from the childhood oh-so long ago, seemed distant. A thought was more immediate: what came first, the wine or the idiot? “Baba, you’re mad,” my daughter said in I-told-you-so. “You’re old.”

That did it. I was back that Monday. I’ve been back every Monday since for more than a year, and every Wednesday and Friday—if I’m in Goa, my present home—for a lesson in old-fashioned Okinawan-style karate of the Shotokan school. If I’m travelling, a three-steps-by-three-steps patch is adequate for a workout.

I don’t know much about the Shotokan school. Its founder, Gichin Funakoshi, or Funakoshi O sensei, is a man of legend. Born in 1868, he learnt two separate Okinawan martial arts disciplines, shuri-te and naha-te, later melding these with his own innovation to birth kara-te. He worked his art of fighting with bare hands, using parts of the body as weapons. Karate is a composite of kara, which can also mean ‘empty’; and te, hands. So, it can be translated as ‘the way of the empty hand’. Funakoshi sensei travelled with the art form from the island of Okinawa to mainland Japan in the early part of the 20th century and, after a demonstration before the royal family in the 1920s, stayed back to slowly work his philosophy and magic on converts.

I started to ask myself questions. Why was I doing this? Not to beat people up, surely. To pick on someone ‘my age’ would be Pot Belly Circus. To defend myself against someone younger or bigger might work up to a point. If someone came at me with a knife, maybe. But a knife, and a gun? Karma as much as karate.

Over a few weeks, my body started to limber up. My daughter stopped laughing and sniggering. It didn’t seem so odd when my sensei spoke of his sensei who, with a kiai, a bellow/shout that comes from the belly, and hara, a long-lauded centre of great energy, was able to both surprise and demoralise a foe. He then tried it on me. I was rocked back several steps back without realising what had happened.

Suddenly, karate didn’t seem like anything at all except coming to terms with one’s self, a merciless mirror. I began to realise yet again, without the self-consciousness that often accompanies a simple truth masked in mysticism, that I had at once two great allies and enemies: my body and mind. They say karate is about form and emptiness: form is emptiness, and emptiness is form.

Perhaps, but it had been a long time since I had encountered positive ego.

This package is camouflaged in simple ways. We wear a simple uniform of rough cotton—a loose wrap with shortened sleeves on top and pajamas that stop well above the ankle, and are together known as gi. A belt holds the top in place and, its colour denotes one’s progress—or lack of it—in the art, and runs from white to black with several shades in between.

In a month, I could joke with sensei that I wasn’t doing this for a black belt; I own a few, bought from stores. He laughed. I then told him, along with two other regular practitioners in my class a little below me in age, that we’d be happy with a white belt all our lives: colour had little to do with self-belief.

And so, there I am—there we are. My class now includes three other middle-aged men. One runs a screen-printing business, another kills himself working nights at a thankless Goan newspaper, and another is just out of jail for inadvertently causing a traffic accident. We mentor two youngsters: an apprentice plumber and a waiter. A student of management plans to join us. Sometimes, when we attend classes in the evening, meant for children and youngsters, far ahead of us in application and proficiency, we can scarcely stop smiling when we see their faces as we keep up with them, even as we defer to them.

The rewards are already present. This past year, I can’t remember a time that I have lost balance, literally and in my head. It’s nice to run, and walk, for great lengths, along sidewalks, laden with luggage along airport corridors, or up hillsides without getting out of breath. This also helps my other great passion: scuba diving, where calm is everything. The combination of endorphin and accomplishment is a wonderful tonic for a day’s writing, or to simply handle better so many of life’s trials, from sustaining dreams to living in a perplexing world.

My young cat, Biscuit, is impetuous. She ran off one evening, only to get stuck on a high wall. Her wretched mewing drove the household crazy; we called her name, trying to coax her down. Then, without realising it, I reached her and brought her safely home. Only later did it hit me: I had fairly cantered atop a slim wall with a pencil torch in my hand, scooped Biscuit up, and jumped back down.

My daughter stopped laughing after that. Some weeks ago, she told me her friends think her father is ‘cool’ as he practises karate. Me. Glory be.

We’re no longer at Don Bosco. We’re at a simpler, more vibrant place: Miramar beach where the Mandovi river meets the sea. By the time the moon sets and the sun is up, there’s no pain for us; we’re in a zone. Barefeet, wearing gi bereft of macho kickboxer patches—and fiercely proud of it—it’s easy to spot us. A motley crew of ageing men counting numbers and canting phrases in Japanese accented with Indian English, Konkani and Marathi, leaving grooves in hard and soft sand alike. We get tired, but ‘tired’ is not an option; overcoming it is. Come, join us.

Sudeep Chakravarti is a columnist, analyst and the author of Tin Fish, Red Sun: Travels in Naxalite Country and Once Upon a Time in Aparanta. He lives in Goa.