Waiting for the 20th Surgery

A 12-year-old girl was gang-raped so brutally in Jaipur in August 2012 that her vagina tore and merged with her rectum. After 19 surgeries, her condition remains heart- rending, and Rajasthan government officials can’t wait to get her off their hands 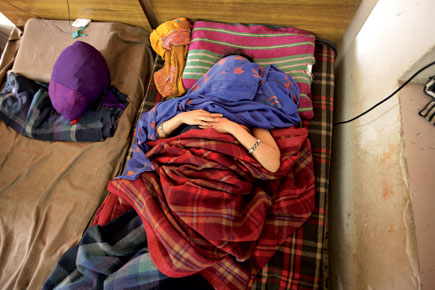 A 12-year-old girl was gang-raped brutally in Jaipur. After 19 surgeries, her condition remains heart-rending, and Rajasthan government officials can’t wait to get her off their hands

New at work, Ram Niwas Singh had just settled in with his tea and Parle G biscuits. It is a warm February afternoon in Delhi when the light winter sun renders a kind of lazy stupor. The tea might help him pull off the day-shift that is to last another few hours, he says, while looking for the visitors’ register surrounded by a pile of mail and pamphlets.

It’s been three weeks since he joined work as a security guard at Rajasthan House, the state guest house nestled in the upmarket and leafy part of central Delhi and he is yet to organise himself properly, he says apologetically. The new Chief Minister is yet to make a visit, and things have been slow at work so far. As he begins to enter the details of my visit in the register, he stops at the mention of ‘purpose of visit’. “I have only seen her being taken in and out of the building in a taxi last week,” he says. “You had a Nirbhaya case in Delhi, she is like the Nirbhaya of Rajasthan,” he says, with an eerie sense of pride.

As he fills out the details in the register, he gives me directions to the girl’s room, located behind the guest house in the servants’ quarters. His voice softens a little. “Do tell me how she is now. She has had over 15 surgeries already,” he says.

The girl has been living with her family in room No 9 in the quarters behind the building since she was transported in an ambulance overnight from Jaipur’s JK Lone Hospital on 13 February 2013. The shift a decision taken by the state government ‘inspired’ by the decision of the Central Government to ‘airlift’ the Delhi gang-rape victim to Singapore before she died in a hospital there around the same time. The girl, about 12 years old now, was gang- raped, allegedly by six people, in Sikar on 20 August 2012 on her way back from a movie. Though she survived the assault, her pelvic region has been horribly disfigured and left a mash of damaged organs. She has had to undergo 19 procedures so far; 15 of which were conducted in Jaipur, the remaining four at Delhi’s All India Institute of Medical Sciences (AIIMS). The procedures include two major and four minor vaginal reconstructive surgeries.

Unlike Ram Niwas, the domestic and medical staff on duty know who the girl is—they see her struggling everyday to walk in the balcony to ensure her muscles do not waste away. She lies in bed practically all day. One of them goes up the stairs twice a day to hand over the lunch and dinner provided to the family by the canteen downstairs. They have all witnessed her being lifted and taken in an ambulance to AIIMS for check-ups. As workers scrub every bit of the white marble floor in the main hallway, in anticipation of an impending visit by the new Chief Minister, the supervising staff point to a door on the first floor of the quarters in the backyard, marked by a maroon shawl hanging by the railing. “You should see how well we have kept the girl, the media needs to know these things instead of blaming the Rajasthan government all the time,” says a woman clad in a green-and-red sari, almost condescendingly.

It is the air, thick with a nauseating stink, that you notice first in the room. There are four beds lined up, all covered in stained sheets, leaving almost no room to move around the room. The girl is lying on the first bed, covered in a dark grey blanket, and stoically watching an episode of Chota Bheem on television.

As her elder sister and mother come in grumbling after a spat with the girl's supervising doctor at the dispensary downstairs over her medicines, a woman comes in from the kitchen with a tray carrying three cups of sugary tea flavoured with ginger. “Opening the windows will not help. This is the stink of sickness that we all have to bear,” says the girl’s mother, when I suggest this.

After the assault, her vagina was so badly torn that it had merged with her rectum. While doctors in Jaipur had to create a passage through her stomach for her stools to pass adequately, damaged veins and muscles in the area were treated with procedures involving a vaginoplasty and an eddo-rectopasty. As the girl removes her blanket, to change the cotton gauze around the mouth of the temporary passage, the stench of dried blood and faeces is intolerable. Humiliated and helpless, the girl pulls her salwar up and starts crying. Minutes later, exhausted, she is back to her stoic self, pulls her blanket up and goes back to sleep.

Together with her four daughters and two grandchildren, the mother has been living in this room for the past year grappling with uncertainty, hostility and fear. With 19 surgical procedures completed and the twentieth (hopefully the last) delayed due to infections and other complications, more uncertainty looms over the family. They were summarily transported from Jaipur and put up in a guesthouse in central Delhi. The staff and officials here are hostile; they see the family as free-loaders living on State money. The fact that it is a family of migrant labourers from Bihar, and not original inhabitants of Rajasthan, worsens this hostility.

“Who told her to go for an evening show in the evening in a place like Sikar?” asks Vijay Kumar, resident commissioner at Bikaner House, who has been keeping track of the expenditure incurred on the girl’s stay and treatment. According to Kumar, the state government had sanctioned Rs 2.25 lakh for the girl, of which Rs 59,000 has been spent on the family's food and stay, the rest on her medication. With a new government in place and Bihar losing interest in funding her treatment as Lok Sabha polls near, Kumar is hurriedly hoping to get all the bills cleared. “Do you think they could have earned that much in their lifetime?” he asks.

Originally from Darbhanga district in Bihar, the mother worked as a vegetable vendor while her husband was a painter, earning daily wages, before he died of a cardiac failure while at work early in 2012. Of their seven children, three daughters are married and the son lives with his in-laws in Darbhanga. The girl is their youngest. After the death of her husband, the mother moved to Sikar in search of a job, and lived with her elder daughter and her husband. The daughter worked in an aluminium plant and the mother found a job in a gum factory. The girl and her two sisters worked as domestic help, and found a friend in Munni who is also from Darbhanga.

On 20 August 2012, on the occasion of Eid, the girls decided to go for a show of the Salman Khan film Ek Tha Tiger. “We’d never been to a theatre and were missing home, so we decided to watch a movie to cheer up,” says the sister. Since the movie was a 6-9 pm show, the girls worried about getting late and left the theatre before the film ended.

According to the sister, the accused were also watching the movie in the same theatre, just a 10-minute walk from their then house. “We didn’t know they were following us. They grabbed Munni by her dupatta but she managed to run away. They then grabbed my sister and pulled her into their car through the window,” she recalls.

“We ran after the vehicle screaming but they sped away. We rushed to the police station but they refused to file an FIR. We described the vehicle to them, gave its number and also told them the direction in which they had gone, but they refused to file an FIR,” she says. The next day, the entire neighbourhood, led by local school teacher Saroj, started a protest in front of the police station. “It was only then that they lodged an FIR. By 4 pm, they found my sister lying unconscious on a highway,” she says.

“The girl told me that the two men had blindfolded her with Munni’s duppata and tied her hands and legs with her clothes,” says Naseema Khatoon, who works with an NGO in Sikar and helped file the case. According to Gaurav Srivastav, then superintendent of police who was investigating the case, the accused Suresh Jat (25) and Ramesh Sharma (26) were arrested two days later.“Some reports say six of them were involved, but it was only Ramesh and Suresh who raped the child,” he says.

The two allegedly raped her in a secluded area in Sikar. The police identified the accused through their vehicle and calls made from their cellphones. Two of their accomplices, Girdhari Lal and Yograj, gave the accused a change of clothes and Rs 500. The girl’s earrings and bangles were recovered from their vehicle. She was found by a man the next afternoon in a daze on the highway.

Soon after, Girdhari Lal and Yog Raj got bail from the High Court; Ramesh and Suresh are in jail. The Rajasthan police are yet to begin proceedings against the accused, as the girl, who recently went through her last psychiatric examination, is still deemed too unfit to attend an identification parade. “She still wakes up late at night, screaming. How will she recognise them?” the mother asks.

Jk Lone Hospital admitted six more cases of gangrape reported in 2012 after this case. Following the furore over the Delhi gang-rape and an uncanny similarity between the two incidents, the case came to be known as Sikar Ki Damini. “The public furore and media pressure led them to transport the girl to Delhi. It was for the better, as the state civil hospital was not equipped to handle the complexities of the case,” says Khatoon. “The girl was repeatedly facing infections,” she adds.

As her sisters and mother fret over the delay, quarreling with the cops on duty and the doctor in charge at Rajasthan House over the delay in treatment and medicines, hostility and distrust battle it out in the balcony every day, possibly getting the better of the girl who stoically plays Temple Run on a cellphone bought by her brother- in-law, if not watching Chota Bheem on TV. There has been no psychiatric counseling for her, apart from the examinations done by the police to check her mental state for recording a statement. Both times, she was deemed unfit for this task.

“We want her to go now, but what can we do, the treatment has to be carried through while the entire family has parked itself on our property,” says a visibly frustrated Kumar.