Deserted by her muse, Aditi Aanand signed up for a writing class in New York. And many a short story and haiku later, discovered that writing is really a contact sport, not a solitary activity 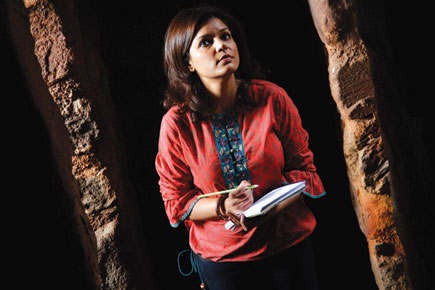 Deserted by her muse, Aditi Aanand signed up for a writing class. And discovered that writing is really a contact sport, not a solitary activity


Deserted by her muse, Aditi Aanand signed up for a writing class. And discovered that writing is really a contact sport, not a solitary activity

To say that  there is a book inside each of us is a cliché. But when compelled by that apparently inevitable urge to purge, I abandon all other pursuits to attempt an impetuous launch into the literary world.

In an instant, every person I know who has ever written anything from a cookbook to a letter of complaint has some friendly advice. “Pour it all out,” one tells me.  “Just let it flow,” is another pearl. Feeling vaguely like a teapot, I attempt to pour in vain. But alas, the pot is more than half empty. A dozen book readings and writing groups later, I learn to deftly balance a glass of wine and cracker in one hand even as I use the other to have my book signed by the author de jour. All while having an intense conversation on the future of English publishing in India, about which I admit, I know absolutely nothing. The written word, however, continues to elude me.

Searching for writing programmes,  I find the Summer Writer’s Colony at the New School in New York City. Learn the ‘Art and the Business of Writing’, the website promises; in three weeks and for the reasonable fee of $4,000.  My brother has heard good things about the New School; Lori, from the admissions office, assures me that “beginners are welcome”.

And so it is that just a few weeks later, I file into a classroom with 30-odd other hopefuls on what is my first day at the colony. A motley group, we glance furtively at each other, juggling books, notepads, laptops and Styrofoam cups of coffee. As we stand to introduce ourselves, it becomes clear that I am the only “workshop virgin”.  Suppressing panic, I turn my attention to the first class of the day.

Sue Shapiro, our teacher for ‘Selling First Person Essay’ (writing for journals), begins by telling us that she teaches ‘The Instant Gratification Takes Too Long’ method of writing. Tall, skinny and dressed completely in black, she paces the room as she talks, compulsively twirling a pen between her fingers. The air fairly pops, crackles and snaps with her nervous energy. I catch only about a third of what she’s saying. Luckily, she repeats every sentence at least thrice, each time with an emphasis on a different word.

Our first assignment is to write a ‘humiliation essay’ about the most horrible or embarrassing thing that has ever happened to us. It seems any number of respectable publications will pay good money to hear about your pain, humiliation and misery in 900 words or less. “Get personal,” Sue says. “Focus on drama, conflict and tension; challenge, reveal and trash yourself; tackle unresolved emotional issues and always provide a cathartic release.” She illustrates the importance of title and opening line with a story written by one of her students and published in The New York Times, titled, ‘Up Yours Chuck, My Story Of How I Fell In Love With My Nurse While Having A Colonoscopy’.

Over the next two weeks, panic gives way to a heady exhilaration. Writers block a thing of the past, I spend most evenings pounding away at my laptop, writing stories from different perspectives, in the first, second and third persons, and in various narrative styles. I start a dream diary (‘School Of Dreams’), pen a haiku (‘Sense And Sentiment, Introduction To Poetry’) and deconstruct Peter Rabbit (‘Writing For Children’) even as I argue the dubious distinction between the novel and memoir.

I become familiar with writing school parlance, on occasion even venturing to use it myself. “Less is more,” I might say casually, or “Show, not tell.” “Show us the pain and suffering” is an often-used line at writing workshops. Audaciously, I question Peter Carey, two-time winner of the Booker prize (and visiting author at the colony), on his use of the cycle as a narrative tool in his novel, Parrot And Olivier In America.  My piece de resistance is an experimental fiction account of my sofa expressing its political views during the evening news. A stunning commentary on the suppression of the political masses, my teacher calls it.

Having taken to writing like the proverbial duck to water, yours truly must now prepare for others to read her work. This process, akin to being fed to the lions, is called ‘workshop’. As I read, the others listen expectantly, for as a newbie I have much to prove.

“I love it,” Jenny gushes the moment I finish. Jen, an ex-model, is writing a memoir about her marriage and subsequent divorce from a minor rock star. Predictably, Michael feels my female protagonist is “distant”; he has a problem with most female characters. The result of a cold, absent mother (two short stories, one dream piece), the rest of us agree.  Namisha is next: “Give her some backbone, girl,” she says of my character in her thick southern drawl. Honest, sexy and irreverent, Namisha’s last story was about a woman with three successive husbands, three children and three other ‘baby daddies’. Coincidentally, Namisha has three children of her own. All from different fathers, she tells us. An hour later, having successfully defended my writing with conviction, I sit back, satisfied. “A 16-year-old Indian girl would react that way,” I say firmly . “Mother Teresa? Of course, she’s a real person,” I retort indignantly.

Sitting Indian-style on the floor and breathing alternately from first one nostril and then the other, I search for a word that rhymes with bird. Welcome to ‘Yoga and Writing’,  the first of many informal events intended to ‘foster community’ among us colonists. Another is the ‘Literary Walk’, taking in stuff like Mark Twain’s home and the house where Louisa May Alcott wrote Little Women. She is rumoured to have walked all the way from Connecticut during the Civil War. Later, we sit squashed in a single booth at a dingy bar and compose walking poems over cheap plonk.  My personal favourite is ‘Meet and Read’, where denizens of the colony, students and faculty alike (including Lori from the admissions office), collect every Friday to share their writing and indeed, stories, over pizza and beer. Today, Luis (Assistant Chair of the Writing Program) is reading ‘Airplane Nanny’, a humorous account of how he was left holding a baby on a plane.

There is much laughter and shouted encouragement. Spirited debate and even some tears, as funny-sweet and poignant moments reveal themselves. But mostly, there is a sense of kinship. Fostered no doubt by the fact that those present know entirely too much about each other! But no less, by a shared understanding of the joys and travails of being a writer and of the momentous realisation that writing, far from being a solitary activity, is in fact a contact sport.