The Amazon, Ganga and Brahmaputra are not enough for Andy Leeman. Having sailed six rivers across the world, he now has his sights set on the Yangtze in China. Open meets the tireless river campaigner 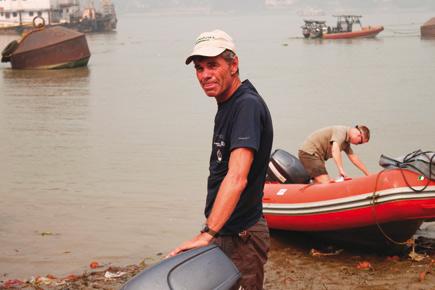 The Amazon, Ganga and Brahmaputra are not enough for Andy Leeman. Having sailed six rivers across the world, he now has his sights set on the Yangtze in China.


Andy Leeman is a man in love. And like most men in love, he’s on a big mission, with vast, enviable quantities of energy to boot. It’s barely a few days since he completed the first-ever expedition tracing the mighty Brahmaputra from its source in Tibet to the Bay of Bengal, but far from being exhausted, he speaks excitably about his big plan to create awareness about rivers and save them. “Roads have sounded the death knell for rivers and river-folk in many parts of the world. It is criminal not to use rivers as highways,” he says.  The 55-day expedition down the Brahmaputra, which Andy and his team completed on 24 November, was his sixth: he had boated down the Orinoco and Amazon (South America), the Mekong (South East Asia), Zambezi (Africa), and, last year, the Ganga.

It was a packed 55 days down the 2,800 km long Brahmaputra. Leeman and his team would be up at daybreak and start sailing around 8 pm every day. They would stop sailing by 4 pm, dock and buy food, firewood etcetera from local people around. Then they’d cook; they cooked their meals every day. The trip wasn’t without its share of heart-in-the-mouth moments either. “One day, two boats flipped over, and four of my team fell into a whirlpool. Me and a co-leader managed to pull them over. It took a while though, because it was a whirlpool and so we just couldn’t dive in to save them. Phew, that was something,” he says.

Leeman, who runs a yacht charter and store selling water sports equipment at Mallorca in Spain, says his interest in rivers was ignited by chance some years ago when he was sailing down the Pacific coast to Panama. “I saw a fishing boat on the sea negotiate a huge swell and sail down the mouth of a river. I waited and followed the next fishing boat from the sea to the river and then upstream. Soon, I reached a small town where many fishing boats were anchored. I docked there and explored this town, just on Panama’s border with Costa Rica. It was like stepping back in time. This town was bustling, its economy robust though totally dependent on the land and the river. Its folks were cheerful. And it was not linked by any road or airport. This is how villages and towns along rivers and waterways were a century ago when roads were sparse—happy, environmentally and ecologically sound, healthy and sustainable. And I realised then how important rivers are and how important it is to save them,” recalls Andy.

The 56-year-old sprightly Swiss man’s life has been a hugely adventurous one. Born in Zurich in 1954, he says his fisherman dad instilled in him a love for water and lakes. “I went to technical college to learn sailing and about sailboats, and then took up ocean racing,” he says. At 21, he drove from Switzerland to South Africa and worked there for eight months to save enough money to travel to South America. “I travelled across South America and worked as a mechanic in Argentina and Colombia before an illness took me back to Switzerland. In 1977, I toured South East Asia, going down rivers in sailboats. I took up odd jobs for sustenance and even modelled for men’s wear in Bangkok and other places. I then travelled to Hawaii before returning to Switzerland, where I worked as a manager at a sports shop for five years. Wanderlust overcame me again and I travelled in a sailboat to England before opening a charter service in the Caribbean for American and Swiss agencies. I lived there for eight years before a bad road accident had me confined to a wheelchair for eight months. After recovery, I took up an offer to manage a boat charter service in Cuba for one year and then moved back to Switzerland to work as a manager for a security company. It was an interesting job, but life in Switzerland was too organised and I started missing the adventure. So after two-and-a-half years, I migrated to Spain to open the yacht charter and store. That was in 1994, and this business is my primary livelihood even as I tour the world,” saya Andy.

His river expeditions started with an invitation to powerboat racing on the Orinoco in 2003. “It was here that I got hooked to rivers. The racing was fun but dangerous, and I managed to become the first ever European to win (the third position) in this fiercely competitive race.” He wanted to participate the next year as well, but the race was cancelled due to political problems in Venezuela. “I then undertook an expedition down the Orinoco river.  I took the motorboat down 1,600 kilometres through Colombia, Venezuela and Brazil and had a lot of fun, not least because many of those places are also the most dangerous on earth,” says Andy. He got a sponsor to undertake a similar expedition in two inflatable boats with outboard engines down the Mekong the next year, travelling more than 2,000 km through six different countries. The Zambezi river was next in 2008, with Andy being sponsored by the World Bank and UN agencies to spread awareness about malaria among communities that live along the river. “I travelled 2,900 kilometres through Zambia, Namibia, Botswana, Zimbabwe and Mozambique. The BBC did an hour-long documentary on the expedition,” says Leeman.

The Ganga expedition was next in 2009. “I was deeply saddened by the state of the Ganga. It is such a beautiful river, but it is being tortured to death by the very people who consider it holy. If things continue like they are, there will be no Ganga in a couple of decades’ time. This will be the fate of many other rivers in India. I must say you guys treat your rivers shabbily,” he says, shaking his head. Leeman acknowledges the necessity of generating electricity and irrigating farmlands. “But instead of big dams, one can have micro hydel projects that don’t disturb the flow of the river too much. Discharge of effluents and sewage into rivers, as is the common practice all across India, has to stop immediately. If your rivers die, your civilisation dies too,” warns the sailor.
He is also a campaigner for the rights of river communities. “People living along rivers have to be guaranteed access to a minimum level of water flowing through their rivers. I raise money through events like giving lectures, holding exhibitions of expeditions and other activities to raise money for communities living along the rivers I travel,” he says.

He’ll do more, he promises, if he can raise more money. Meanwhile, his sights are on the 6,300-km Yangtze river in China that he plans to negotiate sometime next year. And more rivers will follow.