The Man Who Doesn’t Ask for Money

Money makes him uncomfortable, so Vinod Sreedhar refuses to charge for his workshops. He accepts whatever people want to pay. He trusts the universe to provide for him. Here he is, in his own words 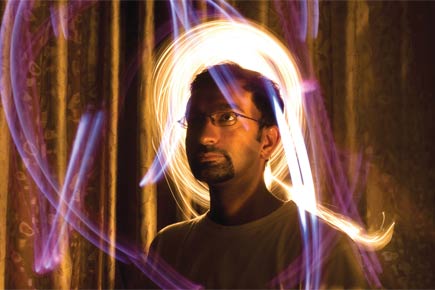 Money makes him uncomfortable, so Vinod Sreedhar refuses to charge for his workshops. He accepts whatever people want to pay.


It was during a period of self-chosen exile when it finally hit me. February 2008. Two weeks at home quietly thinking, writing and sketching, limiting my interactions with people. An idea that had been trying to form itself for a while arrived unexpectedly out of the murky depths of confusion, aglow with promise. It was simple: I decided I would no longer charge money for my work. I was a convert to the gift economy. My time, my talents, my energy would be a gift to people, free of charge. I would accept whatever I got.

Having experienced the oxymoron called ‘college education’ during my BCom studies, I had made a rapid and happy exit from the world of academia. Over the next decade, I composed music for the ad industry in Bombay and co-founded a social enterprise with friends. Now, however, I focus mostly on two things: I put together personality development workshops, and help spread green ideas for the sustainable use of the planet’s resources, so it remains healthy in the future.

After the initial noble high subsided, the questions rushed in. Why on earth would I want to do that? How would I make a living now? Wasn’t I making myself vulnerable to exploitation? But no matter how much or long I focused on the apparent absurdity of the idea, it continued to feel right. Nearly three years on now, it still feels right. But when I look back, I wonder. Was it about feeling noble? Or having the approval of the world?

My desire, however, stemmed from something more immediate. I was tired of what money was doing to me. Money had begun to dominate me, making me accept work that didn’t have any heart. Holding back my best ideas became second nature. Until the money showed up, of course.

But, what use is a song that is not sung? What use is unused creativity? Creativity is also spontaneity, and spontaneity cannot be wrapped up and saved for a rainy day. If it isn’t acknowledged, it’s gone, maybe forever.

That initial rush of optimism surprisingly lasted a while. My first big project was coming up—organising an ecological visit to Ladakh for a group of 15 people. This was also the first time I was openly connecting the gift economy with my work; I did not set a fee. To their credit, no one in the group looked at me as if I were mad. I think they found the idea rather curious. Twenty five days later, with many memorable experiences behind us, we returned home from Ladakh. It was time to assess my takings.

My first gift economy earnings: about Rs 700. But this would barely cover a couple of taxi rides and a cold coffee at Barista. Somewhere inside, I could sense disappointment lurking. But I also knew I wasn’t supposed to be feeling this way. Where was that darned noble feeling when I needed it? And where was all the generosity I was expecting?

What a hypocrite I was! I was continuing to practise the profit-seeking ways of my earlier life. Clearly, there was a long way to go.

Project number two—co-facilitating a workshop that my friends were organising—materialised in winter 2008. This time I was better prepared when the inevitable question came—“What would you like as your fee for the workshop?” Nice try. “No no, we really want to pay you for this workshop.” Sure thing. I’m not saying no. “So… what would you like as your fee…?” Heh heh! This was getting better and better. I could visualise my friends struggling to deal with this. How much should they offer me? Would it be too much or too little? What if I got offended with their offer?

They would just have to move past their initial discomfort and figure out what value they were receiving and were willing to support. This was fun. Finally, they called back with an offer, spoken in a rather tentative tone. And it was a very good one, too. There was no question of rejecting it, of course. I really wanted to be part of this workshop, money or no money. The gift economy roller coaster ride was becoming increasingly enjoyable.

With three years of experience making such a living, I’m often asked whether I’ve been exploited. It’s quite the contrary, actually. Getting cheated was a constant worry and reasonably frequent experience earlier. Now, one of two things happen. People are mostly generous in supporting me. The amounts I’ve received for my work easily equal and sometimes outstrip current ‘market rates’. Or if people are unable to offer me much or anything at all, I take the attitude that they must have a good reason for not being able to do so.

Seen from the outside, the gift economy can be confusing. It overturns the values of the market economy. The idea that one has to compete for scarce resources is jettisoned. Instead, our gifts of material goods, skills and time are freely circulated so that an ever-expanding circle of paying-it-forward is created in which the giver in turn becomes the receiver. So, how do we make this work? Two words—unconditional trust.

Learning to trust the universe hasn’t been easy, but something has clearly changed. Consider the following:

May 2009. My bank balance has just gone below the red line. No one else knows about this. A stressful two days ensue. And then I’m flooded with immediate and compelling relief as I remember what I need to do: ‘Give, and you shall receive’. I let the worry go and focus on work. A few days later, my friend Madhu calls saying someone has anonymously left me a gift as support for my work. It’s an envelope stuffed with cash. And it’s not a small amount. Money that I need arriving at just the right time, and anonymously at that, from someone who can’t possibly be aware of my need? What are the chances?

November 2010. I need a digital video camera for my work. I post a request on Facebook asking if anyone wants to sell one. A week later, a friend who was nominated in an online competition wins the exact same model that I need and gifts it to me. Coincidence? I think not.

Practising the gift economy way is ultimately an act of faith. Just like life. Belief without proof. Simple, unfettered faith.