The Killing Fields of Falcons

Last October, Ramki Sreenivasan was among a group of conservationists who went to investigate the illegal hunting and sale of migratory Amur falcons in Nagaland. What they saw was a mind-numbing massacre of the species 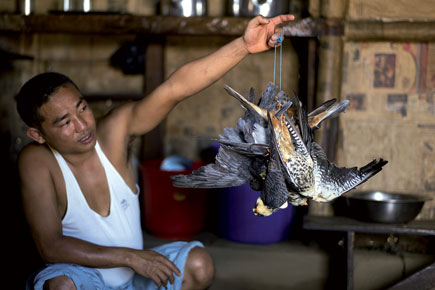 Last October, Ramki Sreenivasan was among a group of conservationists who went to investigate the illegal hunting and sale of migratory Amur falcons in Nagaland. What they saw was a mind-numbing massacre of the species


“Oh my God! Stop, stop, stop!” screamed Roko, our hawk- eyed Naga field assistant. It brought our vehicle to a screeching halt. “Are you seeing what I am seeing? Those black dots way up in the sky… they are all Amurs. Thousands of them.”

We hurriedly got out of the vehicle, the Bolero of our good friend and project partner Bano Haralu. We stuck our binoculars and cameras onto our eyes and craned our necks up with excitement. And lo, there were tens of thousands of them blackening the sky like a dark cloud.

We couldn’t believe our luck that we were seeing live Amur falcons in such huge numbers. It was something we always wanted to confirm but never got the opportunity. This was what we had travelled for, all the way from the plains of South India to mountainous Nagaland. To see the world’s largest congregation of this bird was magical.

An estimated one million Amur falcons (scientific name: Falco amurensis) arrive in Northeast India all the way from Siberia en route to their winter destination in Eastern and Southern Africa. These birds are unusual in that they migrate a large distance over sea. They have one of the longest migration routes of all birds, doing up to 22,000 km in a year. Midway, they stop in Northeast India and Bangladesh to fatten up, readying for overland flights across peninsular India. Subsequently, they cross the Indian Ocean to East Africa non-stop over 3,000 km, flying day and night.

Our Nagaland trip was carefully planned in October 2012 to coincide with the arrival of the birds. We had heard reports—some unconfirmed— the previous years that a few birds were showing up during this season in local markets for sale. Since we had no idea of the scale at which the Amur was being hunted, we decided to check it out for ourselves. What we definitely knew was that the birds stopped in Nagaland on the banks of the Doyang reservoir in Wokha district. Doyang is a rock-filled dam and hydroelectric plant on the Doyang River—a tributary of the Brahmaputra— run by North Eastern Electric Power Corporation (NEEPCO). It is 30 km from Wokha town.

On reaching Kohima, the capital city of Nagaland, we were joined by Bano Haralu and RokoHebi Kuotsu. We have to travel 150 km from there. As we were getting close to the reservoir, we saw two women walking along the road with about 60 skinned birds. They were all Amurs. This was our first encounter with the species. We saw dead birds before we saw live ones. After the initial shock of a welcome to Doyang, we found some respite in seeing thousands of these birds sitting on the vast electric transmission lines along the mountain ridge, stretching for kilometres on either side of where we stood. They seemed to use these lines for not just resting (after the flight from Russia) but also for hawking insects. The Amur are known to be wholly insectivorous. We could estimate about 12,000 birds on the lines and twice the number flying above the reservoir. This hectic activity is seen in the mornings, while in the evenings the birds descend upon the forests along the reservoir to roost.

And, we found out, this roosting habit of theirs is what hunters take advantage of.

When they are on transmission wires by day, Amurs are virtually inaccessible to hunters. The birds only descend to forested patches along one bank of the reservoir to roost. We saw that hunters exploited this particular behaviour by setting up huge fishing nets, 30-40 metre long, 10-12 metre tall, all over the roosting sites.

Shashank Dalvi, the fourth person in our group, a wildlife scientist with Centre for Wildlife Studies (CWS), Bangalore, and Roko accompanied one group of four hunters to the reservoir’s other remote side by a rowboat. There they encountered several other hunting groups.

The birds get entangled in the nets in large numbers during late evenings and early mornings. The nets were permanent and all that the hunters had to do was come every morning to grab the trapped birds. The nets were over the entire roosting area, and there was almost no safe area for the birds. Branches and paths were cleared to set the nets. Each hunting group had at least 10 nets, which caught about 180 birds per day. This we confirmed by interviews and conversations with hunters. We were also informed that about 60-70 hunting groups operate every day. This means during peak migration, about 12,000 to 14,000 birds are caught every day. This obviously results in a loss of a significant number of birds on a daily basis.

Assuming just 10 days of peak migration through Doyang, this suggests a mind-boggling 120,000-140,000 birds lost from the population every year. The number is larger if the migration lasts longer or if there are more hunting sites in the area (neighbouring villages, districts, etcetera). The estimate doesn’t include birds potentially killed using guns, catapults and other traps—a widespread and accepted practice in the Northeast.

The captured birds are kept alive in mosquito nets or cane baskets near the nets so they can be sold to customers or exported to other markets alive. From cane baskets, the birds are transferred to poles for ease of carrying into villages and towns. Many birds eventually die in the process and these are de- feathered or plucked like poultry and then smoked to increase their ‘shelf life’ before they are sold.

Each bird is sold for a price of about Rs 16-25. Usually, they are sold as a bundle of birds for Rs 100. This sale usually happens door-to-door in Pangti village, where most hunters are from. Nearby, Doyang and Wokha towns are also hubs of this trade. Hunters and sellers know that Amur killing is illegal—banned by the Deputy Commissioner, Wokha, since 2010. But that’s hardly a deterrent.

However, local villages cannot absorb such numbers for their consumption. It is still a mystery where the huge numbers of dead Amurs go everyday. One of the hunters told us that two trucks from Dimapur (in the plains) come everyday to pick up the birds from Pangti village. We couldn’t confirm this and passed on the information to the District Commissioner and Superintendent of Police. It is important to understand where the bulk of the birds go if this slaughter is to be stopped.

By the end of the day, with the stench of smoked Amurs in our heads, the scale and ruthlessness of the massacre had numbed us. What we uncovered raises questions about India’s conservation ethic. These killings have serious international implications. India is a signatory to the Convention of Migratory Species (CMS) and thus has a responsibility under international law to ensure safe passage for these birds. To add to that, India holds—for two years—the presidentship of the Convention on Biological Diversity (CBD), which recently concluded in Hyderabad, and its core species conservation agenda is to stop bushmeat hunting.

But there is hope. While our eye witness accounts stunned the conservation community and nature lovers all over the world, the government and civil society were quick to respond at multiple levels. The Wokha Deputy Commissioner immediately reissued the hunting ban and made it known among all local communities. He organised a meeting of village elders, which included participation by forest department officials, where steps were discussed to prevent hunting in the future.

The Chief Wildlife Warden of Nagaland also issued instructions to his staff to seize all traps found in the area and has warned of stern action against the guilty, including arrests of offenders. Forest guards and personnel were put on duty, and remained at the site till the end of the migration to monitor the situation. They confiscated some hunting nets and released several trapped birds.

At the national level, India’s Minister of Environment and Forests Jayanthi Natarajan expressed concern while writing to the state for updates on action taken.

Organisations like the BNHS, WCS, RCCF and Birdlife have also helped impart a reassuring momentum to this campaign.

Our own team is finalising a conservation programme that proposes an ‘Amur Watch Program’ , a low- impact eco-tourism initiative that could link international wildlife lovers and local children from the neighbouring villages, starting next season. It will also offer alternative livelihoods to villagers.

To end, here is an apt quote from Steve Boyes of National Geographic, which picked up this story really early and generated plenty of global awareness: ‘…the whole world will be watching what the Indian government does next year to stop this slaughter. Migratory species like Amur falcons drive home that we are a global community. That the earth needs global solutions to poverty, hunger, climate, and biodiversity conservation…’