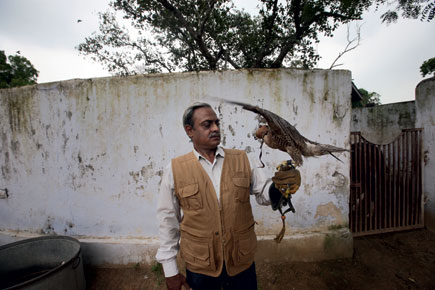 
A walk through the old city of Jaipur is a lesson in the notion of a time warp. Pushed away into one corner as a token reminder of the erstwhile ‘Pink City’—by a new bustling ‘Tier-II’ city dealing with traffic jams and rejoicing over shopping malls, real estate prices and a metro railway under construction—the old city is a neatly preserved museum-like form of the original built in the 18th century by Maharaja Sawai Jai Singh II.

As proud city dwellers and tourist guides ask you to consider the wonder of wide lanes, bylanes carved out with great geometrical accuracy and neat cement facades painted in pink, reminiscent of the well-planned city built three centuries ago in pink sandstone, one cannot help but notice the ugliness of buildings illegally spiralling out behind the scene, vying for space in the sky and the road, cheekily distorting the geometrical pattern of the city’s architecture. While the wide lanes built to accommodate the king’s zest for elephant parades may prompt you to scoff at city planners today, the traffic jams and crowds are often seen to deter even those given to such inner-city exploration.

Though the descendants of the Maharaja continue to live behind the gigantic gates of the City Palace in the heart of the old city, newly inaugurated edifices, like a tall tri-colour with high-voltage lighting or new shopping mall called ‘Pink Square’ promising to house all possible brands under one roof, seem to have replaced the charm of the old city.

Pushed into irrelevance and forced into a time warp, the old city languishes under the burden of its past glory. Fifty-five-year-old Shahid Khan, a descendant of this languishing order and a resident of the old city, too, appears caught in a time warp of sorts. A falconer by lineage, Khan is the only Indian in India who has a licence to practise falconry, or breed birds of prey in captivity and train them for hunting (espionage by falcons is now seen only in movies). But he has all but given up, having pulled out of the sport over the past couple of years. He may have a licence certifying his skill in this ancient art, but it finds few takers anymore in the modern world.

It is an art form believed to be about 4,000 years old, and Unesco accorded it ‘global cultural heritage’ status last year. Khan, however, holds out no hope for it. He believes it has no future. The Unesco report, incidentally, lists two people as falconry licence holders in India. Other than Shahid Khan, it names Shantanu Kumar, an IPS officer who passed away two years ago. This makes Khan the only Indian who has the legal right to train falcons. It is just that nobody seems to care.

“The reason is lack of patronage and interest,” Khan says in his baritone as he steps out of a white Maruti 800 to be greeted by a small group of helpers and his elder son. As Khan emerges from the car, his pet falcon Sultan, perched regally on his right hand (protected by a glove made of leather), creates a flutter among the helpers. One dashes off to fetch water for the thirsty bird. Another reminds the helper to get some water for Khan as well.

The falcon’s head is in a hood that covers its eyes, the idea of which is to prevent it from spotting other birds in the sky and trying to fly off in their pursuit. “He is still learning, and is very young,” Khan says, offering an apology for his three-year-old pet’s furious fluttering of wings—which creates panic among the crows sitting overhead on a tree. Sultan’s claws are tied together, too, so that he does not entertain thoughts of flying out into the sky. The offspring of a bird Khan bred earlier, Sultan is growing up as a fine raptor under Khan’s tutoring.

“I am the only licensed falconer in India. But we have no sport meets to promote this sport. The Indian Government is not interested in promoting it and people are not interested enough to apply for a licence to practise it. What do I do with mine?” he asks as he walks into a stud farm owned by the royal family of Jaipur. With an air of pride and sudden self-importance, he announces, “This property belongs to the late Rajmata [Gayatri Devi of Jaipur], and they breed horses here for the derby in Mumbai. I come here often to train my birds.” Khan currently has four birds under his wing and claims that he now practises falconry only as a hobby.

Now a jeweller by profession, Khan says that a falcon is a delight to own as a bird of prey. “You should see the way it takes flight and the speed with which it dives to catch its prey,” he says, only to add quickly that he does not train Sultan solely in hunting. “I have lost interest in hunting,” he says, “Besides, there are several rules for hunting birds.” Khan is instead studying Sultan’s flight range by having the bird fly marked distances from and to different points.

“The falcon is the national bird of the UAE and the royal falconer sits on one side of the Queen in the UK. I get several calls from Army officers and other important people to professionally breed these raptors for them. I refuse because they would not know how to look after them and they would die,” he explains, stroking Sultan lightly. “Falconry is not just about breeding them in captivity. One has to look after their diet, exercises, tend to their wounds and monitor their health,” he says. Sultan, for example, is fed Japanese quails and is being taught how to attack chicks. It is also an expensive and time-consuming hobby. “I cannot afford to maintain a staff to look after my birds,” he says, “These helpers are from the stud farm and help me now and then.”

According to Khan, falconry is believed to have originated in Mongolia and Iran four millennia ago. Man learnt to use falcons and hawks to chase away pests and locusts that would often attack crops. This gradually developed into a royal sport of game hunting in India; Mughal Emperor Akbar is also said to have practised falconry. “It is believed that he had about 10,000 birds of prey and a dedicated staff to look after them,” Khan says, adding that it was around then that Rajasthan’s royalty got interested. With species such as Shikra, Sparrow Hawk and Peregrine Falcon easily found in Rajasthan, the maharajas of states like Jaipur and Bhavnagar kept up their patronage of falconry till at least the 1940s. It took a beating after Independence, though, when most princely states merged with India.

Khan was first introduced to falconry when he was only 13 years old. “My father’s elder brother bred birds for Kumar Dharam Singh, brother of the Maharaja of Bhavnagar. I got interested in it then, and gradually gave up on school and my studies.” He later trained under Colonel Osman, brother of King Zaheer Shah of Afghanistan. Osman, 95, lives in Dehradun now and is an eminent expert on falconry. “I met him during the shooting of the movie Akbar the Great. Both of us were invited to assist with the training of falcons for the film,” he says.

Khan pulls out a black-and-white photograph of a young man with a thick moustache over his mouth. The falcon perched on his arm is hard to miss. “That was me at the age of 18, when I caught my first falcon and learnt how to train it. My moustache was impressive, just like any royal’s,” he says with a whiff of nostalgia.

The Indian Government, which listed the falcon under the Wildlife Protection Act of 1972, granted Khan permission under the Act in 1999 to save the bird from extinction and conserve it through captive breeding.

“I was granted permission at a time when the population of falcons was rapidly declining,” says Khan, who has worked on 40-45 species of the bird and is a former honorary wildlife warden of Jaipur district.

The highly endangered bird—classified under Schedule 1 of the Wildlife Protection Act along with the Royal Bengal Tiger—was disappearing from the state at an alarming pace, put on its way to extinction by such man-made factors as the spraying of the pesticide DDT in agricultural fields.

“The birds’ breeding capacity has diminished to a devastating extent, as they often consume rabbits and rodents that feed on these crops. Their numbers are higher in areas like Barmer and Jaisalmer, compared to Jaipur and, say, Udaipur.”

Khan has also conducted a survey on the numbers and behavioural patterns of falcons in Rajasthan for the environment ministry.

As he rummages through a bagful of papers and photos documenting his journey with falcons so far, Khan holds on to a letter of appreciation from the emir of Abu Dhabi and a copy of a visa to the emirate. “They had a conference to exchange information on falconry. I treated one of their birds and was offered a job,” he exclaims, adding that he turned it down as he did not want to be a ‘royal servant’. “I have a legacy from my uncle,” he says, “and it should be accorded due respect.”

Khan claims that his own country has not given him much recognition. While Khan has been consulted on occasion for using falcons to tackle bird-hit cases at Delhi’s IGI Airport, proper projects have been tangled in red-tapism and lack of interest. “In countries like the United States, fighter jet pilots are trained in falconry to study aerodynamics. This bird can dive at a speed of almost 480 kilometres per hour,” he says.

“The Punjab government started a Rs 6 crore Union project on captive breeding of falcons in Chhatbir Zoo. That too has not worked out so far,” sighs a disappointed Khan. With lack of patrons, Khan is certain that falconry is a dying art in India, but insists on holding on to and nurturing whatever bits he can. He hardly flinches as Sultan digs deep into his bare left hand with his claws, wounding him.Khan is keen on passing on his skill to younger would-be falconers. “I am looking at opening a training school with the government, but nothing has worked out yet,” he says.

“If the emir of Abu Dhabi can offer me a job, I am sure that something will work out [in India itself],” he adds, hopefully.