Troubled by the spectres haunting Europe, Claudia Richter is on self-imposed exile in India 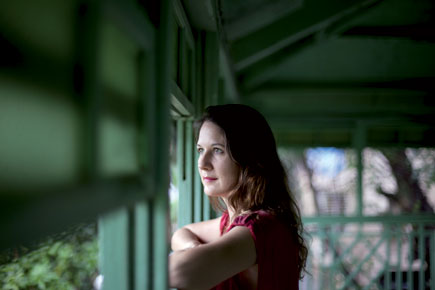 Troubled by the spectres haunting Europe, Claudia Richter is on self-imposed exile in India


In Anglo-Saxon England and in ancient Greece, and I presume in other traditional societies, exile was a punishment worse than death. Bereft of kinsmen and family, the exiled protagonists in the Anglo-Saxon elegies The Wanderer and The Seafarer, for example, traverse a cold and hostile world, lonely and sad. Plunging his oars into the ice-cold sea, the Wanderer’s sole companion is sorrow, while the Seafarer in a similar situation watches a flock of sea birds that bring back memories of happier days in the warm company of friends and kinsmen.

If you start to feel lonely and sad amongst your own kin, then something has to be wrong. It could be that you are depressed, in which case it would be appropriate to see a therapist, figure out what’s wrong, and maybe embrace spiritual practices or physical exercises that help stabilise the psyche, and then get on with your life. If this depression, however, is not only linked to your personal history and childhood, but to a larger social climate, problem-solving becomes more challenging. What can an individual do if the sense of hopelessness one experiences is actually a collective issue, and owed to external factors that the individual cannot really influence?

Speaking to a well-meaning ‘aunty’ about my experiences with German institutions, she encouraged me to stay within the system and get over my negative feelings and experiences. To support her views, she quoted a piece of wisdom from the Indian spiritual tradition: ‘If you want to change something in the world, you have to change.’ Well, there are two ways of interpreting this. The correct way, I believe, is to say that any change in the exterior world starts from within. As I understand it, this means that if you start being true to yourself and your values and begin to act differently in the world, the world around you will be affected by it, and will be forced to configure itself in response to your different attitude. What she seemed to imply, however, was more to the extent of saying that I should change my attitude so that I could tolerate a situation that made me suffer. Perhaps it is a radical way to put it, but to my mind this equals telling someone who is being raped that she should try to enjoy the rape. I don’t think this is what the sages meant.

Long before this encounter, I had decided to follow other advice I had come across during a visit to the Kabbalah Center in New York many years ago, which in a way corresponds to the above-mentioned quote from the Indian tradition, as I understand it: ‘If you realise that you’re in an unhappy relationship, get out!’ I chose exile in India to recover, rethink, rejuvenate and re-energise, and perhaps to catch a clearer sight of the spectres haunting the home zone, although it is only now that I am even in the mood to think about my home zone again.

Eight months ago, all I wanted was to get out. India was an obvious destination, as I have always wanted to come back for longer ever since my first visit in 1996 as a 19-year-old backpacker. Many of the things I dislike about Western modernity somehow seemed not quite as bad over here. Why should I spend so much negative energy on critical analyses when I could just go and live in another world, where interesting things pre-modern and non-Western were still around? Of course there are other problems here, as my Indian friends never cease to point out, but these left aside, it turned out to be the perfect place to feel free, disconnect from all the things that bothered me, and press the reset button.

Upon my arrival in Mumbai, I found that I was not the only European who had chosen to shift to India for a while. It was a completely different crowd from the kind I had encountered here 15 years ago. Instead of hippies, there were hipsters, young professionals and entrepreneurs. Not all of them are taking refuge from Europe, as I was to find out. The younger ones who had just left college were simply excited about the opportunity to explore the world, expand their horizons, and yes, pimp up their CVs. The decreased value of Bachelor and Masters degrees after the reform of higher education in Europe has left these youngsters with a sense that formal education is not everything, and certainly no guarantee of a job, which is why they choose to take life into their own hands. Work experience abroad, especially in a country with a rising economy like India, will make them more attractive in the labour market, they believe.

Others in their mid-thirties like myself are a bit more sceptical and perhaps more perceptive of the alarming undercurrents of recent developments in the political and social arena in Europe. The euro crisis crystallising in the collapse of the economy of Greece, once the cradle of European culture, has left many people uncertain whether politicians of mainstream parties are really capable of managing this grand EU project that was set up with the promise to give us a better Europe.

Not that Europe was in such a rotten state that it needed a complete makeover, really. Or was it? At least before the introduction of the euro, Spanish youth did not have to leave their country to work. Central Athens did not look like a war zone, and people did not shout slogans of hatred against the German Chancellor, and represent her with a swastika and a toothbrush moustache. And the middle classes constituting the majority of the populations in Europe were not struggling to make ends meet, as they are now. What’s more, the European people were never really asked whether they wanted the EU. It was shoved down their throats with slogans like ‘open borders’ and ‘multi-culturalism’, against which, of course, there is nothing to say. Unfortunately, however, the concept of multi-culturalism is beginning to look like a mono-culture designed by bureaucrats in Brussels, who pay themselves astronomical salaries for restructuring and centralising everything from educational systems to the size and shape of tomatoes. What seems to be emerging is not a better Europe, but a more totalitarian Europe, and the cultural destruction of a truly multi-cultural continent by political leaders and bankers who do not appear to have much culture in them in the first place.

Apart from a failing EU project, other things also make you wonder. The NSA surveillance scandal revealed that in Germany, up to 60 million private emails, text messages and phone calls were scanned daily by the US government, making Germany by far the most targeted country in all of Europe. If you grow up being taught that the US is your friend, role-model and saviour, this feels a bit odd. As if all this was not enough, just recently, Harald Schumann, prize-winning journalist of Spiegel TV, resigned and made it unmistakably clear in an interview that in Germany, freedom of press is not common practice. Not that we hadn’t guessed it already, but it is now confirmed that there is media censorship in a Western democratic country.

My own research proposals on Swiss psychoanalyst Carl Gustav Jung, who is considered ‘taboo’ up to the point that he is completely absent in any theoretical discourse in the humanities, were submitted to German research foundations and backed by letters from the most respected scholars in my field, but were rejected twice—not unexpectedly—for reasons that sounded biased rather than informed. I concluded that truly interdisciplinary and original thinking is not really wanted in this ever more bureaucratised academic environment, even if any call for research proposals issued by the EU calls for exactly this.

Luckily I have now managed to create other options for myself, but I do feel for all those highly gifted people who have set all their cards on this career and will be spending their lives as intellectuals who are not meant to use their intellect for truly relevant questions.

Apart from these political issues of sorts, other developments in society are not exactly uplifting either. A friend, who has been working as a kindergartner in Berlin for 20 years, tells me that he has never witnessed so much insecurity among parents when it comes to raising children. This is a kindergarten in the bourgeois neighbourhood of Berlin-Schoeneberg, where parents are fairly educated and well-to-do. Nevertheless, they do not know what values to teach their offspring, and seem to be incapable of setting boundaries and giving guidelines.

I also came across a survey that stated that among the world’s industrial countries, Germany’s youth was the saddest, despite relative economic well-being. Now, I am probably the last person to blindly follow statistics, but on my last trip to Goa, I had a conversation with a restaurant owner when he spotted other Germans walking on the beach. I asked him: “But how do you know they’re German?” His reply: “They look sad.”

Is Germany really that sad? If so, I don’t know how much of it could be owed to the results of EU policies, the challenges of modern life in an industrialised nation, or the psychological long-term effects of war guilt which still affect everyone who grows up in this country, or perhaps some other cultural factor resulting in lower emotional intelligence and sensitivity, which I have come to think about especially since coming to India.

The situation is confusing indeed, and it will take some more time to understand what is happening in Europe. Meanwhile, I want to thank my host country and its people for being so kind and welcoming, and for not giving me any reason whatsoever to feel like the Wanderer on a wintry sea. I have found new friends, whose warmth, compassion and sensitivity keeps astonishing me; I enjoy the refreshingly different aesthetics of the environment, especially a seashore with black ravens and plastic hanging in the trees, which at low tide looks better than many an art installation in any Western museum.

I am pleased like a child when the rickshawallah takes a short cut on the wrong side of the street. And it simply feels great to be in a country where one of the most ancient civilisations of the world is still alive, where millions of people sing cleansing prayers to a river every single evening, and have done so for thousands of years, long before it got polluted. It fills me with new hope to see young entrepreneurs succeed with socially and environmentally responsible projects, and to witness a country known for its problems with corruption display more integrity than any Western country when it comes to big pharma companies (I am referring to the decision of the Supreme Court of India in the case of Novartis in April this year).

Coming from a place that takes pride in being ‘poor but sexy’ (Berlin), I am impressed but also slightly uneasy about the wealth and money-chasing I see around me. And I am also beginning to feel that I might have something to contribute to a ‘modern’ India that is looking for alternative cultural choices beyond tradition and mindless consumerism.