No Country for Love

Priyanka Verma was forced to go into hiding with her husband Ujjwal after her uncles ordered her ‘honour killing’ for marrying outside her community. The couple have been on the run for nearly six months now, constantly shifting cities and hotels to avoid being hunted down. Out of money and exhausted living the life of a fugitive, Priyanka says she’ll not live in fear anymore. 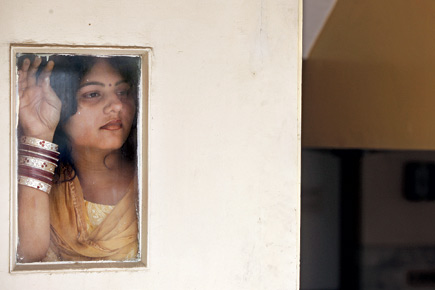 Priyanka Verma was forced to go into hiding with her husband Ujjwal after her uncles ordered her ‘honour killing’ for marrying outside her community.


My name is Priyanka, Mrs Priyanka Verma. I got married to Ujjwal at the Allahabad High Court on 25 May 2010. My parents have no problem with my decision to marry outside my caste [she is a Jat married to a Sonar]; they haven’t lodged any complaint against my husband. In spite of that, my two uncles, with the help of a criminal named Sanjeev, extorted Rs 2 lakh from my in-laws. They split part of the money between two policemen, who then picked up my brother-in-law, father-in-law and mother-in-law and harassed them. My father-in-law and brother-in-law were beaten up by the policemen and kept in jail for three days. My brother-in-law even had to be admitted to the hospital. Sanjeev, at the behest of my uncles, continues to threaten my in-laws with dire consequences if they don’t reveal our location. But no one, not even my in-laws, knows where we are.

All this talk of the police providing protection to couples like us is a sham. On the contrary, the police are doing the bidding of the criminals trying to kill us. There is absolutely no security provided to us by the police. They have only caused more trouble for my in-laws, who have had to sell their house to pay my uncles Rs 2 lakh. I am appealing for action to be taken against my uncles and Sanjeev for plotting to kill us. I also appeal for strict action to be taken against the two policemen for accepting a bribe and harassing my in-laws.

We have been in hiding for nearly six months now, and it is getting more and more difficult to make ends meet. I left my house on 18 March. I walked out with nothing more than the clothes on my back. I told nobody. I took nothing. I just left. I had no clue how Ujjwal and I would get by.

We took a bus to Delhi. We had decided to get married. I called home two days later and told them that I was not coming back. And that they should not try to get in touch with me or worry about me. The two of us then moved to Gwalior. A month later, my uncles started creating trouble for us.

The first three months, we stayed in a hotel. The rent was Rs 300 per day and we spent Rs 200 on food. An advocate in Allahabad who helped us get married then gave us shelter for a while. He also got us an order that would prevent our arrest.

We don’t stay in any city for more than a month or two. We have shifted five cities so far. We usually rent a hotel room to stay in. We don’t mingle with anyone. So far, we have been living off the money Ujjwal had saved these last ten years working as a photographer. Including the money we’ve had to spend on courts, the last six months has cost us Rs 3.5 lakh. We are out of money now. And we cannot find work under such circumstances. Only if we decide to settle down in one city can we look for jobs.

I am not in touch with anyone. Not my mother, not my friends. Even our families don’t know where we are. Calling them would mean revealing our location. If we are in Gwalior, we come to Delhi to make phone calls.

The last time Ujjwal spoke to his parents was on raksha bandhan. I haven’t spoken to my family since I left. If my mother had a personal cell phone, I could have called her. But if I call on my home number, anyone might pick up the phone.

We don’t want to ask our friends for help because that will only endanger their lives. They will be harassed by my uncles for helping us.

But I don’t miss my family at all. I am angry with them for putting us through hell. What was the need to do all this? If they don’t want to keep us, I have no problem with that. We can live on our own. But why create so much trouble for us?

If you succumb to fear, you cannot live. Earlier, I used to be very shy and scared. I would even hesitate to talk. But since I got married, my fears have left me. I will not be able to give Ujjwal the support he needs if I am scared all the time.

That is the reason I decided to talk to the media. I want people to see me and hear what I have to say. If my family members are harassing my in-laws, action should be taken against them. If my parents don’t want to have anything to do with me, I have no problem with that. I am happy to have my own family, just as they are happy to have their own. They should not interfere in our lives.

Ujjwal and I met four years ago when he came to my school to take photographs for a programme. I was studying in the tenth standard then. His studio was close to the school. He told me at the very beginning that he wanted to marry me. We were always serious about this relationship. He proposed to me two days after we met! I was completely shocked. I told him I needed time to think about it.

We then started to spend time with each other. I told my parents about him and that I wanted to marry him. But they would have none of it. For a year-and-a-half, we kept our relationship under wraps. When my parents started to look for marriage alliances for me, I realised our time was up and that I had to leave. There was no convincing my parents about what I wanted, so I decided to marry Ujjwal without their consent.

I’ve heard stories of girls running away from their homes and their boys betraying them. There are even stories of girls being trapped and sold off. But Ujjwal’s love is true. He has stood by me. Why should I be afraid? He is my strength.

But you can imagine the state-of-mind of two people who have no freedom to go out in the open and are forced to live like prisoners. How long will we stay inside closed doors?

My husband says that if this goes on, he will have no choice but to confront my family—go back home and settle this once and for all. He sometimes says that we should just assume that these are the final days of our lives.

As told to Pallavi Polanki