The Jawaharlal Nehru University in Delhi turned 40 last month. But for all its political trappings, the one emotion that defines the forest-surrounded campus is romance—or the lack of it. 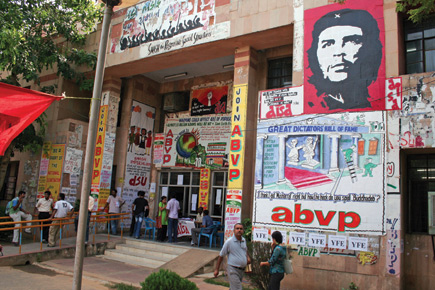 For all its political trappings, the one emotion that defines the JNU campus is romance—or the lack of it.


As an MA student, one of the abiding myths about JNU was if you saw a neelgai (bluebull: a type of antelope), you were doomed to stay on for a PhD. In my case, having run into one within a fortnight of arriving, finishing MA itself became an ordeal. By the end of MA, however, I was seriously lining myself up for MPhil, PhD, and post-doctorate research—the academic works. It was my good fortune (and of my tutors), that none of the latter materialised. When I look back at that phase towards the end of MA, I’m stumped at the squalor that I’d descended into. I’m sure another neelgai must have spotted me, if not the other way round. I wasn’t entirely wrong. For in the sunstroke summer of 2002, my friends and I agreed that the number of neelgais inside JNU had risen indeed.

The first term at JNU was a bit like school actually. Everyone knew one another, or at least claimed to. Batches immediately senior to us would go the extra mile to help us and be extra friendly. The crazy registration process which made one run from building to building—so typical of Delhi and so bureaucratic—appeared designed for greater purposes. Student political outfits like Students’ Federation of India (SFI), National Students’ Union of India (NSUI) and Akhil Bharatiya Vidyarthi Parishad (ABVP) and All India Students’ Association (AISA), had volunteers installed to help out new students. The registration process became an excuse for the political initiation of the new batch.

The day I moved into Room 160 of Tapti Hostel with my roommate JK, he told me a crazy story. Along with two other pals from Anantapur in Andhra, he had got through JNU. As they got off the Karnataka Express in Delhi, and haggled with an auto-wallah, a senior JNU student, a Bengali babu with sideburns and Mrinal Sen glasses, intervened. He was considerate enough to bring them to JNU, and got them to a single-seat room on the top floor of Sutlej Hostel. It was the JNU student union president’s room, and the man was holding court. From the looks of it, there were a few other newcomers too. He turned around and said there was a candlelight morcha against the Vice-Chancellor (VC) in the evening. The ‘freshers’ would be in the front line. In a memorable introduction to JNU, JK told me, “On my very first day as a student in JNU, I went around yelling ‘Down with VC!’ ”.

By the second term, the student union elections got over, and all the initial in-your-face bonhomie subsided. We were now familiar faces on campus, and if you were lucky and canny, you weren’t suckered into campus-level politics. But there were characters that did so willingly, and how. Maroof-bhai (may your toothy ismile and proud curlicues never vanish or diminish), was a JNU veteran from Etah, in UP. He’d clocked a decade on campus. Flunking different courses, he’d moved from BA in Arabic to a BA in French, followed by an MA in Arabic and a BA in Spanish. Phew.

In time, there seemed no course in JNU’s School of Languages that he hadn’t done. But like Pakistani cricketer Shahid Afridi, his age was a mystery, and he insisted that he was in his early twenties. Also a shayar (poet), he was one of the routine fixtures at JNU’s most famous hangout point Ganga dhaba—his mehfil (court). His wide appeal and ‘grassroots’ knowledge of ‘JNU issues’ got him a ticket with a party. When he went campaigning door-to-door in the hostels, even freshers would fox him with their queries. One even had the cheek to say, “Aapki khichai kiye bina hum aapko vote nahi denge. (We won’t vote for you without teasing you)” Paan-chewing Maroof got a pasting at the hustings. His take was his party didn’t allow him to be his ghazal-spouting self, and philosophically mumbled, “There is no place for poets in politics.” We cheered, “wah wah”.

By the third semester, I had gotten through everything that JNU had thrown at me in terms of politics and intellect—both of which were very boring. More importantly, you realised that if you weren’t hooked up and deep in romance by now, you were deemed a loser. JNU had its solid share of frustoos. In fact, there was a great ‘underground’ organisation for such losers, with its ‘headquarters’ at Delhi University, called Fosla (Frustrated One-Sided Lovers’ Association). Its JNU ‘chapter’ was a legend. Nights on end, men in their rooms put to discussion the (physical) specifics of their female counterparts. I’m still curious to know what happened in the girls’ wing of my Tapti hostel.

The rationale for romance was simple. JNU was tailor-made for love. You got set with this ‘mature’, salwar-decked chick from Godavari girls’ hostel for an evening show at PVR Priya, (which gave discounted tickets to JNU students). You sat side-by-side with popcorn, and your elbows established contact. (You always remembered the Fosla gem: ‘Elbow contact is more important than eye contact’.) So you came out of the movie preferably hand in hand, and got a 20-buck auto ride to Ganga dhaba for chai and chat. And now came the make-or-break question: “Can we go for a walk?”

If the answer met with a ‘yes’, the lucky ones would saunter across Ganga lawns with the knowledge that they’d crossed a crucial hurdle, and get nervous. You took that outstanding Victorian-era path that connected Jhelum and Sutlej hostels to Dakshina Puram and Administration Block (Ad Block). Right through that charged promenade, you absorbed the pines, gulmohars, neems which curved, curled and lunged to kiss each other. Both your eyes went up in unison to watch lip-locked leaves. Pretending to probe the sky between the leaves, or the dazed lampposts, you jittered to take it forward. A scream came from somewhere, “Kiss you idiot!” If the first kiss was achieved, you’d sprint for the next one to either the JNU stadium, or the incomparable Partha Sarathy Rock (PSR).

PSR stood diagonally opposite the main library. You avoided the guard, and entered a stony, uneven path flanked by rocks and bramble as planes whizzed towards Indira Gandhi airport. In the dark, you walked looking up and down, your head swinging like a pendulum, till a clear arrangement of human shapes transpired in the night light. A skip across a vacant pond and a climb got you to the rock of all rocks. As it threw open a comprehensive bird’s eye view of JNU and beyond, in PSR’s nooks and crannies love (and lust) blossomed. Life was beautiful.

Bored of hostel food, I’d often jump for butter chicken at Qureishi’s, although Mughal Durbar has now beaten him to it. In classic JNU fashion, ‘Mamu’, a veteran at kavi sammelans and many-times crowned chaat samraat (a debating contest where the most boring and lengthy talker wins), has his own scenic eatery near Ad Block. There’s the homely thaali with an eastern touch at the creeper-fenced Aravalli guest house, and Bengali fish curry at Shombu’s: a Sunday lunch must-do.

I get back to JNU as often as I can, and the prospect of possessing a professor’s redbrick quarters with peacocks for neighbours, lures me to academics again. But oh no, it’s that neelgai once more. I must stop going to JNU. I’ve got the JNU blues.

Rahul Jayaram pretends to be a hard-nosed reporter on the lookout for good stories. But what he’s really after is romance. It’s a quest he’s been on ever since his years in JNU, circa 2000-2002. And as with the hunt for that one great story, the search is proving, well, elusive.