How I survived 42 hours in a lift

Suresh Sonawane, an inspector working with the Missing Persons Bureau of the Mumbai police, went missing—only to be found two days later trapped in an office elevator 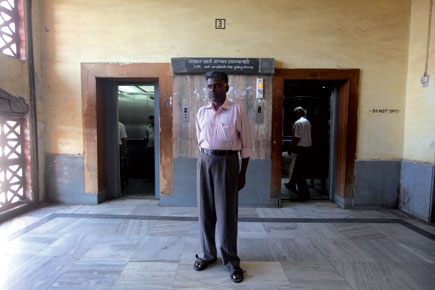 
It was sometime in April 2000 that I had a cerebral haemorrhage. I was taken to a hospital and a surgery was conducted. The doctors weren’t very optimistic but I survived. My life, however, changed completely. I lost all control over one side of my body. My left hand and leg and even the left half of my face were paralysed. I felt a terrible loneliness. My wife and daughter were always around and took good care of me, but this feeling of being worthless was always present. Slowly, however, I began to recuperate. As the years went by, with physiotherapy and medicines I began to regain control over my body. Although the left part of my body remains stiff, I can now move the hand and leg, and also walk about. I also resumed working for the police force. The last few years have been difficult, but life has regained normalcy. When I look back now, the months just after my surgery seem very distant. I realise that I have a lot to be grateful for.

Last month, over a period of two days, all that long-forgotten solitude and misery returned. It was a Saturday and I was at work. Every second and fourth Saturday, we have a half working day at the Missing Persons Bureau. All other offices in the building, most of which are various departments of the Brihanmumbai Municipal Corporation, are shut over weekends. It was 2.30 pm when I decided to leave. I think I was the only person in office at that time. Most of the others take the stairs when descending from our third-floor office, but because of my condition, I prefer the lift. I got into to the lift and the doors shut. Just as I reached out to press the button for the ground floor, the lights went out and the fan stopped working. Initially, I thought it was a power failure that wouldn’t last more than a few minutes. I must have banged on the door and shouted for help for about 10 minutes. After that, I just waited for the electricity to return. As time went by, I began to wonder if the power of the lift had been turned off presuming no one was in the building. I tried to brush this thought aside because this would mean that I would not be able get out till Monday when the offices reopened. After a few hours, I realised that this was a clear possibility. This is probably the moment I most regretted not owning a cellphone. My doctors had advised me against one because they believe its radiation could adversely impact my brain.

I began to panic. Something like an anxiety attack struck me. I started banging on the door and trying to force it open. I thought I was going to suffocate or starve to death. But then I calmed down. I realised that I was breathing fine, which meant that there was fresh air in the lift. Perhaps the space overhead where the fan is placed was letting it in. I told myself that I might get dehydrated and hungry, but two days without food and water cannot kill anyone. I also had this hope that either my family or colleagues, upon realising that I was missing, would come to check the office on Sunday.

What I really needed to be worried about was the extreme isolation. When you are alone for a long period of time, with no one to talk to or activities to keep you occupied, strange thoughts occur to you. I would feel that I had been transported to another world, and that the lift would never reopen. The other thought that kept recurring was that my wife and daughter would think I had abandoned them, or worse, they would take a rash step believing this. I realised I needed to keep myself occupied. So I went through my pockets and lined up the contents on the floor. I had only two possessions—a pen and a sheet of paper. This will probably sound strange, but I decided to try and write poems. When I was a young college student in Solapur, I would write and sing ghazals. Those were very happy times of my life. We even had a band then. After I joined the force, I never pursued this interest, apart from occasionally singing at parties with friends. Now alone in the lift, I tried to bring back those college memories, and tried to write a few poems. I made the size of the letters and words very small, so as to utilise as much of that single sheet as possible. The only source of light in the lift was the tiny space between the two halves of the lift’s door. I don’t have the habit of wearing a watch, and the light also served the purpose of informing me whether it was day or night. I would put the sheet of paper under the light and write. When it turned dark and I couldn’t write anymore, I would mouth the lines in the format of a song.

The only other item in the lift was the liftman’s wooden chair. When I was tired, I would go to sleep sitting on it. I knew that I might have to spend the following day in the lift as well, so I did not sleep on the hard floor and risk hurting my body. I could not sleep for more than a few minutes at a time in any case. I spent much time pacing around inside the lift. Sitting in the same position for long periods seemed to encourage negative thoughts, and walking made me feel better. The first day and night passed like this.

By the following morning, the lack of food, water and sleep had made me somewhat delirious. I felt I could hear sounds outside. It was as if there were people in the building. I would bang on the door and call for help. Almost immediately, all the sounds I had heard would vanish. This occurred a few times. Not only was I tired, I was also extremely hungry. The last meal I had eaten was the previous morning. I could not even remember what I had eaten. On the flip side, this lack of food and water meant I did not feel the urge to visit the toilet.

I knew that in another 24 hours I would be free to go, but Sunday proved extremely long and difficult to get by. I did not even have the energy to write anything.

A few years ago, one of my friends in the police force had introduced me to meditation. He told me that I would recover and feel better if I meditated daily. In the span of a few months, I underwent two 10-day Vipassana meditation courses at a nearby centre. During those 10 days, we weren’t allowed to talk to anyone, led an austere life with simple meals, and spent most of our time meditating. I have been meditating for an hour or so daily ever since. I think this discipline proved tremendously helpful during my second day trapped inside the lift. I was extremely anxious, and both the day and night appeared to stretch on forever. Many others would not have been able to handle it, I think. But meditation helped me calm down.

When a little daylight shone through the space between the two halves of the door the following morning, I was so groggy and tired that I did not realise it. Then I heard a faint morning aazan from a nearby mosque. That’s when I realised that it was Monday, my second morning in the lift. At about 8.30 am, the fan suddenly came back to life. The light in the lift was so suddenly sharp it was almost blinding. When the door opened, I was still on the third floor. I did not see anyone else in the office. I went to the restroom and washed myself. After that I went to the canteen, and the man there was extremely surprised to see me so early and in such a condition. Too tired to explain, I had a glass of milk, some biscuits, and called up my wife.

I took a week off from work to recuperate after the incident. I now never use a lift all by myself. Before I resumed work, my daughter bought two cellphones for me. She’s worried that an incident like this might recur. She says that if one of the mobile phones does not work, at least the other will. When I was at home, I learnt that my colleagues and family had spent all of Sunday looking for me in the city. They also looked for me at Solapur, my hometown.

When I asked my wife why they had not searched for me on Saturday itself, she told me that she had looked around and even called up a colleague of mine to report that I was missing. He had, however, told her that it was police procedure to wait for at least 24 hours before declaring someone missing.