How I Became India’s Only Wildlife Taxidermist

Veterinarian Dr Santosh Gaikwad is the country’s only taxidermist who preserves wild animals. Completely self-taught, he has stuffed several animals over the years, including lions, tigers and snakes. An elephant head too 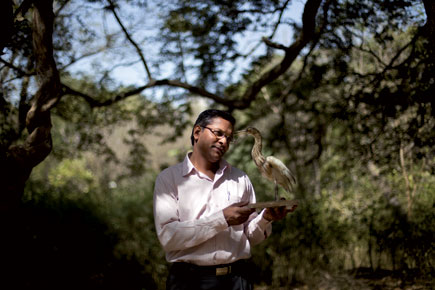 Completely self-taught, Dr Santosh Gaikwad has stuffed several animals over the years, including lions, tigers and snakes. An elephant head too


It all started about 11 years ago. I was around 28 years old then and had been working as a veterinarian and an assistant professor (at Bombay Veterinary College) for three years. I had never been to the Prince of Wales Museum (now known as Chhatrapati Shivaji Maharaj Vastu Sangrahalaya) in Colaba. So, upon completion of some work that day, I decided to spend some time there. The museum, like everyone who has visited it will know, is beautiful. But what really had me transfixed was its Natural History section. There were all these stuffed animals— tigers, deer, birds. I had never seen anything like it. They seemed so lifelike, so real. I did not know animals could be preserved in such a way. So I asked some employees working in the museum about it. They told me it was called ‘taxidermy’. I wrote the word down in a notebook and looked it up on Google when I reached home.

One thing led to another, and I was soon reading up about what exactly taxidermy is and how it is done. As my reading increased, I started developing a strange hunger to learn more about it. This was extremely bewildering because till some time earlier, I did not even know it existed. I started to look for colleges and educational institutions in India where I could learn the art of taxidermy. There was none. So I started looking for other taxidermists. I found a few, but they had all given up their practices a long time ago. Also, they had all been taxidermists of birds. So I learnt a bit about how to go about bird taxidermy from them. I continued my research as a secondary pursuit.

For the next few months, every ten days or so, I would spend time at the museum to understand how it was done. I started noticing smaller things then—the small lines where the skin had been sutured together, the manner in which the body had been mounted.

In the meantime, I had begun my own taxidermy practice. I worked on dead chicken and pigeons for months. As a vet in a hospital, I did not have any shortage of them. Every day, plenty of sick and wounded birds and animals are brought to the hospital. Many of them die and are disposed of. I started picking up those dead birds. At first, I would work on them in the hospital after work. But slowly, I started taking them home. Soon, this became a daily habit. I would neatly wrap up dead chicken and pigeons in a bag and carry them aboard a local train from the hospital to my house.

My wife, however, objected. I was using the refrigerator’s deep freeze compartment to stock the dead birds. This freaked my wife out—because many of these birds had died of some disease or another, and she was worried they might contaminate the food stored in the rest of the refrigerator. But I had my way, eventually. For safety’s sake, I would always keep the birds in air- tight polythene bags.

Taxidermy is a delicate art. One has to be extremely patient. A little force, and the animal’s skin can tear and it becomes unpreservable. The first piece I completed was a bird. I had worked on some 25 birds by then. To me, this bird was a beauty. But when I look at it now, I think it is atrocious. Among other faults, the most glaring is the fact that the chicken’s head is crooked and slants to the right.

I slowly improved on my bird pieces, and graduated to fish. For the next few months, I became a regular at fish markets. I bought all sorts of fish—rohu, katla, mrigal, etcetera— and worked on them. I was increasingly getting better. Then cats, dogs and goats followed. All of these animals, I got from the hospital.

By this time, this passion of mine had become all-consuming. I gave up my job at the hospital so I could focus on taxidermy. My colleagues laughed at me. They said I would be an idiot to leave my job just to pursue such a hobby.

Taxidermy requires the knowledge of three important subjects—anatomy, sculpture and painting. As a vet and professor, the first subject was covered. Also, I have always been a fairly decent painter and sketch-artist, but to improve my knowledge of painting, I befriended young painters from JJ School of Art who could help me. To understand the fine art of sculpting, I began visiting Ganapati idol makers before Ganesha Chaturthi. I also made a number of visits to tanneries in Dharavi to learn how to preserve and tan animal skins better.

By 2006, I was making fairly good stuffed animals. And then one day, I had an idea. Everyone in India spoke about saving the wild, but when animals died, their bodies would be burnt. It seemed a shame that such magnificent creatures were being consigned to flames and lost forever after their death. So I thought, ‘Why not preserve them?’ In 2006, I approached the Maharashtra Forest Department through Bombay Veterinary College. In 2008, department officials allowed me to work on a leopard from the city zoo. The authorities loved that piece, and they wanted me to work on more. So they gave me a written note allowing me to practice taxidermy on wild animals that the forest department handed me. Thus, in this way, I became the country’s sole taxidermist working on wild animals. More animals from all over the country followed. I worked on more leopards, snakes, a Siberian tiger, an ostrich, a rare Indian narrow- headed soft-shell turtle, and a number of other animals and birds. I have recreated more than 200 birds, 200 fish and reptiles, eight big cats, and at least 25 smaller animals like squirrels and civet cats. I am currently working on a Himalayan Black Bear.

As my workload increased, in 2009, Mumbai’s Sanjay Gandhi National Park built a special taxidermy centre for me. Even today, this happens to be India’s only such centre. I currently have two attendants with me here who help me with my work.

My dream now is to work on an elephant. Because of the size of this animal, this should prove an especially challenging task. A few years ago, I came close to fulfilling this wish. An elephant had drowned in a forest area in Maharashtra’s Gadchiroli district. I got a call late at night asking me to travel immediately to the spot so that I could use the pachyderm’s body for a piece. I made a request that we salvage the entire body, but the officials only agreed to have the head preserved. I was in Nagpur then. There was also this fear that the body would rot and become unusable, so I lost no time in departing for the location. However, it took me more than a day to reach the spot. By then, the elephant’s body had already started developing maggots. The forest officials and workers there were hoping that I would say it could not be used and they would then be saved the work of transporting and cutting up the animal. But I did no such thing. Not only did I work on that animal, I think it is one of my finest pieces.

Last year, I preserved a peacock that belonged to Maharashtra’s Raj Bhavan. I believe it was Governor K Sankaranarayanan’s favourite; though there are six other peacocks and nine peahens at the Raj Bhavan. When I presented it to him, he was very happy. He thanked me and asked me how we should preserve it. Later, I heard from others that he had turned teary-eyed on seeing the bird.

I do not understand my fascination with taxidermy. It is a passion that has absorbed me for quite some time now. And it does not seem like I will stop anytime soon.

A couple years ago, I went to an astrologer and asked him if he could explain my passion to me. He said that many years ago, I had been the chief of a tribal group that killed many animals and birds; the gods got upset and cursed me that in my next reincarnation, I would spend my entire life bringing back dead animals. I do not know if this is true, but it certainly does not feel like a curse.