Three years short of being 100, Homai Vyarawalla believes that spontaneity is the key to life. This is what motivated her to become India’s first woman photojournalist and capture the key moments of India’s independence, to sell the Tata Nano gifted to her by the company the day it arrived, and to fearlessly continue living alone in Vadodara. In her own words... 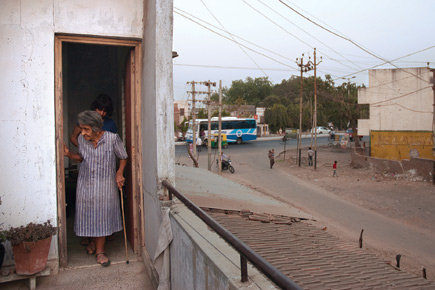 Three years short of being 100, Homai Vyarawalla believes that spontaneity is the key to life. This is what motivated her to become India’s first woman photojournalist and do much more.


Living alone at the age of 97 is difficult, very difficult, but you must take it as it comes. My husband died 40 years ago, and my son 20 years ago. In this life, there is nothing hazardous, nothing to be scared of. If something has to happen, it will. If God wills it, then I will be fine; I have nothing to be scared of. God sends people to help me. Now, a man named Paresh Prajapati helps me in every aspect of my life. You have to have faith. If you are afraid, you cannot do anything.

I would not call it fearlessness to live alone. It is an acceptance of events and circumstances. Even when I started with photography, back in 1929, I was not scared that I was doing something new, and neither was my mother. My father was an actor, he wasn’t around much. But I had the support and encouragement of my husband-to-be, Maneckshaw, who was a photographer, and introduced me to the art.

A time comes when changes start happening. You come across somebody who influences you a lot—in my case, it was him. I met Maneckshaw when I was 13. He used to send photos to the press. You are influenced when you come in contact with such people, and so was I.  My mother was of the view that as long as I was happy, I should do it. And once I started getting paid for my photographs, Rs 1 per photograph, she was convinced. Photography paid better than my painting at the time.

In those days, there was no bias against women. Nobody thought about gender and what was a proper occupation for a woman. If we wanted to fight a war, we could. My mother was not very well educated, so she left such decisions to me. Even the British did not interfere in education. If a person wanted to study something, he could. So, my decision to take up photography was not met with resistance in any circle.

At first, I borrowed my husband’s camera and took photographs of what I thought should be captured on film. They used to be published under his name. My first photograph to be published in a newspaper under my name was of a picnic. The Ladies Club of JJ School of Art had organised it. They came out so nice, they gave it a full page in the Bombay Chronicle. Thus started my career as a photographer and photojournalist.

Many people have asked me what it was like to meet people like Jawaharlal Nehru, Mahatma Gandhi, Lord Mountbatten and Indira Gandhi over the course of my career. I tell them that, first, they were not the only people I met; there were many important people who came from abroad, like Marshall Tito, Queen Elizabeth and Richard Nixon. Second, I did not know these people as such. They recognised me from the number of times I was present at photo-shoots. But that’s all. My constant endeavour was to maintain a distance from the subjects of my photographs, while capturing them in unique situations. I was never over-awed by them.

The Illustrated Weekly of India used to give me assignments to photograph these people, even though they had a photographer of their own! In the early days, field situations were not easy for me. The camera, made out of wood and steel, weighed a lot and was hard to carry around. But I managed, even climbing tables and crates to get the right angles. Once, I fell off a stack of empty cases during Muhammad Ali Jinnah’s last press conference in India, before leaving for Pakistan. At first he frowned, but on seeing that I was a woman, he expressed concern and asked if I was hurt.

Now, there is no longer anybody I would like to photograph; my time has gone. There is always a time to stop, and you should know it. Unlike Amitabh Bachchan. How does it profit him to keep going on, other than in purely money terms?

Last week, I left my home in Baroda and came to Delhi for two reasons. The first was to receive a Lifetime Achievement Award from the Ministry of Information and Broadcasting. But there comes a time when such things no longer affect you. If the people appreciate my work, very good. If not, what do they know about photography? Besides, the Rs 1.5 lakh purse that accompanies the award is too much for me to spend in the time I have left. I want to donate it, and am looking for places where I can. There is so much more satisfaction from making such donations.

What concerns me more is what will happen to my life’s work once I am no longer around. Sometimes a burden becomes too much to bear. I was starting to panic about the fate of my work. I realise now that they are historical in a way, and must be preserved. There were many photographers who lost their work to carelessness, but I don’t want to be like them.

That is why I have donated all my negatives and equipment to the Alkazi Foundation for the Arts. I was eager to part with them. If you cannot manage a thing, you should let somebody else do it. If you are obstinate, then when you’re gone, somebody will just throw all your work into the dustbin. I was looking for somebody to preserve my art. The Alkazi Foundation has organised an exhibition for my work, and that is the second reason I am here.

At these events, I am the chief guest and people want to photograph me. Many people ask me, how does it feel to go from being the photographer to the photographed. My answer is that it is embarrassing. I do not want the attention. Also, these new photographers are not bothered about my appearance. When I ask them if I should change my dress, they say “no no, it’s okay!” They just want to take a photograph, whether good or bad.

One of the more recent photos taken of me that I can remember is of me standing near my Tata Nano. I had ordered the Nano, but cancelled the order because of a delay in delivery. My time is short, I want things done in a hurry. After I cancelled it, they came and asked me to please take the car. I was embarrassed that they would do all this for me, and also, Tata is from my [Parsi] community, so I relented and got the car. I sold it on the first day itself. The media attention around the incident disgusted me.

In life, you must not crave anything. Let things take their own course. Not once did I ask people to pose for a photograph. Even life should be like that. Spontaneous.

As told to TCA Sharad Raghavan

Homai Vyarawalla is India’s first woman photojournalist and the recipient of a Lifetime Achievement Award by the I&B Ministry. The NGMA, New Delhi, in collaboration with the Alkazi  Foundation for the Arts, presents Homai Vyarawalla: A Retrospective from 27 August to 31 October.