Call of the Road

The lure of a job got Arindam Mukherjee to pack his life in his car and travel the breadth of the American continent and back. He conquered the road, and also regained his confidence. 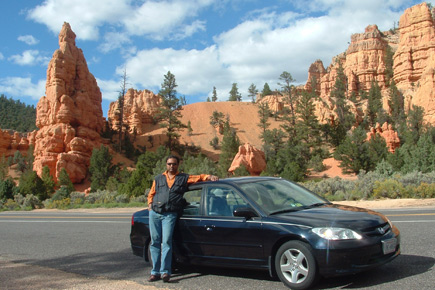 The lure of a job got the writer to pack his life in his car and travel the breadth of the American continent and back. He conquered the road, and also regained his confidence.


Being without a permanent job for about a year, having failed three tests to procure a driving licence and knowing there’s an unwell father back home in India is not a happy feeling in the United States. And God bless if you look like a terrorist and your passport proclaims you are a ‘non-resident alien’. I have no doubt that’s the general first impression I give, being a brown, six-foot plus South Asian, wrapped up in a bulging multi-pocketed journo jacket. Ask the security men at these airports—JFK, Newark, Dulles, Denver, Las Vegas, Heathrow, Amman—where heavily-accented dudes have appeared from nowhere to ask me to step aside for a quick tickle.

All that pawing, and other incidents, explain my distaste for flying in America, or anywhere. So, happily, I turned to the roads. Roads accommodate everyone, and they always take you somewhere you wanna go, except to Guantanamo Bay. More importantly, they rarely give up.

The day I turned to the roads, I was 30. I laid myself down on the tar and hugged it. It didn’t matter that it was a foreign land. I had just been handed a driving licence and the wanderlust in me was ready to hit the road.

Earlier the same day, I had turned up for the fourth time for my driving test at the Department of Motor Vehicles in Indiana. It was a test I had miserably failed on three prior occasions in the span of a year. Every time, I found out that driving a car in Ranchi, Jharkhand (where I belong), and driving a car in Bloomington, Indiana, were two distinct manoeuvres.

That day, the driving test supervisor gave me his toughest task: he took me to a hill and asked me to ‘parallel park’ between two cars. A free inch here or a wrong angle there would mean my fourth disqualification. Luckily, I trumped it that day. I clutched the driving licence to my chest, schlepped into my Honda Civic—which I affectionately called a ‘Whale Bus’—and hit the road. Kishore Kumar’s ‘Musafir hoon yaaron’ boomed in my car.

But now, my inability to find stable employment was draining my spirit. My car’s installments and my bills piled up and I had to find a job quickly. The restaurant in Herndon, Virginia, which gave me a temporary managerial job, caught fire in a freak accident. I was back on the road. The manager at the next-door video store hired me for the front desk. The next day, a beautiful girl came and told the manager that she wanted my job. Back on the road again. And then, the news came that my father was seriously ill. He had suffered a cerebral stroke and was half paralysed. I told my father on the phone, “Baba, let’s fight this together and see who gets out of it first, me from this rut or you from the bed.”

A few days later, a confirmed job offer from Las Vegas came my way. Vegas, I thought and licked my lips. But I was standing 2,500 miles from there, in Washington DC, the other side of the continent, and I was broke.

With neither the money nor the inclination to buy an air ticket, I stuffed all that was mine, including my pressure cooker, into my Whale Bus. An arduous journey across the continent seemed like a wonderful opportunity. I hit the road with a vengeance.

But before I begun my trip, I went to the Smithsonian Air and Space Museum in Washington DC for some quick inspiration. A blunt-ended conical capsule, 3.2 m in height and 3.9 m in diameter, stood there with three seats inside that looked smaller than the toilet seats on an aeroplane. This was the command module of Apollo 11, in which three gentlemen with the familiar last names of Armstrong, Aldrin and Collins had spent nine days, including a quick leg-straightener on the surface of the moon, and sploshed back to Earth.

If they had made it to the moon in a chicken coop, I thought, then the journey I was about to embark on seemed like a quick trip to the john. Little was I aware of the Appalachian climb, where high-speed winds gush over the Pennsylvania Turnpike enough to veer you away from the road; the 85 miles-per-hour Semis that whizz past, spraying rainwater and ice slush on your windshield; the straight and endless sleep-inducing roads of the Midwest; the freaky Colorado weather when it starts to rain, sleet and snow, all at the same time; a stretch of 110 miles in Utah, where the road Interstate 70 has no services and drivers are cautioned to carry at least a torch, a blanket and chocolate bars for exigencies; or the Burning Man festival in the Nevada desert, where non-alien nuts blow up all things sundry into the calm night.

But sure enough, three-and-a-half days later, I was standing on the Pacific Ocean, in Santa Monica, southwest of Los Angeles. I had overshot Vegas by around 300 miles. On the way, I had stopped to collect my appointment letter in Vegas. On the way, I was bone-weary from non-stop driving, with little breaks to rest, eat, freshen up and fill gasoline. But more importantly, on the way, I was endlessly on the phone with my recovering father. We talked. He spoke, I drove.

Now, I stood bravely facing the Pacific Ocean. I had driven across the continent in three-and-a-half days, with two quick breaks, one in Kansas City and the other in Vegas. I had crossed 14 states, three mountain ranges, countless rivers and towns, the serene continental belly of Midwest America filled with cornfields, the northern fringes of the Mojave desert alongside ranches that barely scraped fertility from the earth, along the famous Grand and Bryce Canyons and finally across the Sierra Nevada, which dissolved into the serenity of the Pacific Ocean.

The journey had made me see the breadth of America bathed in fiery autumn colours of red, orange and yellow; the endless yet meticulous blocks of farmland chalked out by unknown country roads; the scenic Rockies where tonnes of boulders suddenly emerge from the ground and attack the sky; the cragginess of Colorado, Utah, Arizona and Nevada that we see in American Western movies; the blinding flash of Las Vegas that would seduce anyone with a heart for adventure; a quick stop on a road to a place as random as to be called Zzyzx; and finally past the brick and mortar of Hollywood. Now, if the ocean in front of me acquiesced to part, I was willing to drive on to China and then down south to Jharkhand.

But the ocean did not part. To top it all, it was Durga Puja in India, and homesickness seeped in. I stood bare feet on the beach and let the Pacific wash off my tiredness. My Whale Bus stood next to the beach, valiant and beaming. Halfway through the journey, another job offer had landed on my lap. I was asked to report back to Washington, DC, for a better pay and position than the one in Vegas. Wowed by the opportunity and the exhilaration of my accomplishment, I called up my recovering dad to deliver the good news. With that, I began my journey back to Washington, DC, on the road.