Children are named after him, fans were sometimes pacified by his darshan, and he worried Kamal Haasan might slay his mother. Vamsee Juluri on growing up as the son of Telugu superstar Jamuna 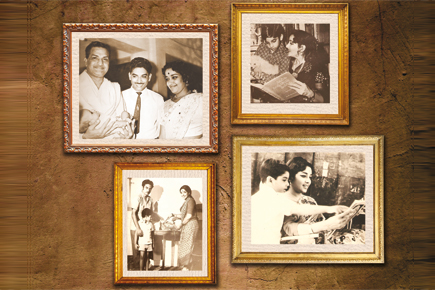 Fans were sometimes pacified by his darshan and he worried Kamal Haasan might slay his mother. What it meant to grow up as the son of Telugu superstar Jamuna


Long before America rearranged my name into its present form, I was known largely as Jamuna koduku. Jamuna’s son. Not that my name was unknown. To this day, I meet people who say their nephew or cousin was named Vamsee because their mothers were fans of my mother. Thanks to my mother, my name also used to be in the papers. It was easy to find. The Telugu press liked to enclose names in quotation marks, as if  to say one existed only if one was spoken into being; in my case, of course, by their beloved cine-goddess, playing my mom in real life.

My mother loomed over my life like a spaceship from a Hollywood epic. Her fame followed me everywhere: school, college, small-town America, where her fans graciously fed me when I was a grad student. It made me think about the power of media, and, in time, gave me a career. It made me who I am.  I am grateful. Yet, I have never written about being my mother’s son before.

When I remember my unreal childhood now, a time when she was still one of the South’s top stars, the world of spotlights and studios seems incredibly magical. AVM. Vahini. Venus. RK. But when I was there, they were as pleasurable to me as glycerine in the eye. All I remember is craving to get out so my mother could take me to a toy shop on Mount Road or in later years to a magic shop in Dadar (I was also a child magician).  The boredom was not because I failed to see the grandeur of the studio. It was just that shooting was so tedious. Fans-off, lights-on, action, cut. And touch-up. I think the last one was really the most important. It summoned not just make-up, but reassurance, brought forth hastily on towel-covered enamel trays. Touch-up was the frontline of a star’s war against anything remotely unstar-like, for as the writer Jerry Pinto once wrote, actors play other people, but stars play themselves. But the vulnerabilities showed too. One of the oldest memories I have is that of a child-star playing my mother’s son in an outdoor shoot of a picnic scene. My mother was feeding him sambar-rice, and maybe a song played too. They emoted great delight, but after each cut, the boy would shuffle off behind a tree to spit it out, all too mortal.

Despite the dreary rituals that preceded it, I always found the action real. Maybe hearing someone yell “silence!” had that effect. Maybe it was the make-up and costume. And maybe, it was just that it was my mother there, under all that heat and light. No matter how unreal the scene she was shooting, it was never only an act to me. When a vengeful Kamal Haasan leapt in through a palace window on the sets of Raj Tilak, I felt fear. I knew he would realise soon that the Rajmata was innocent and wouldn’t harm her, but I still couldn’t tolerate that moment.

I suppose that is the semiotic game we play all our lives. It is all a game, and yet it is real. Just like the medieval accident that terrorised me on another set long before Raj Tilak. This movie was also a historical fantasy, called Rajaputra Rahasyam. The studio was full of wooden spears and swords and axes. I pestered my mother for some, and finally the great NTR himself commanded that I be presented a couple of swords. But I wasn’t sated and wanted to watch a real fighting scene being shot, for once. I went. The set was of an amphitheatre, with a sandpit where two gladiators and a ‘dupe’ were fighting. Their weapons clashed and their sandals thumped and threw up sand. But what scared me most was the menacing spiked flail that one gladiator twirled above his head. Suddenly, the spiked ball snapped from the chain and soared towards me like imminent death. But when the ball landed in front of me, it bounced away like the rubber ball it was.

But studio life was not all painted-over rubber balls, and reality could be needlessly harsh. Once, I went to watch the rushes of a film about a heroic cheetah that defeated smugglers and reunited estranged families. I thought this would be the coolest movie my mother did—till I saw cheetah Garu in the studio. Skinny and miserable, his lips were tattered and bloody from being stitched up each morning. The real and unreal collided many times that day. A burly villain’s henchman practising punches got his nose smashed. The sliding steel door to the villain’s den was not automated as the rushes showed but pushed by a hapless man hiding behind a fake wall. The producer-cum-villain’s cheque to my mother, written in green bandana costume as I watched, would indeed, as her secretary predicted, bounce. The movie was never completed. Just as well, my mother said, for what they did to the cheetah (for the record, she was famously fearless with animals and the mouth-sewing was not for her benefit).

But the studios were only one part of the unreal movie world. Home was the main staging area with all the people who made up a star’s human machinery. Sometimes a tailor would occupy a guest room for days, pedalling away at a sewing machine on her costumes, resisting my pleas to play cricket. Once or twice, shooting took place at home (once in my school, and that felt odd indeed). My mother’s dolls, cars, dogs (she had dozens of them at one time) all appeared in movies. In later years, the house would resonate with songs and poems accompanied by harmonium as her mythological drama troupe rehearsed.

Home was also where the fans came. Our quiet neighbourhood (in those days) would often be shaken awake by the noisy arrival of a tourist bus packed with fans. Their itinerary would usually be something like Lord Balaji, NTR, my mother, and the studios. Their protest when she was not home could be intense. Their reasoning invariably would be that since the big white car they saw her drive in Pandanti Kapuram was home, she had to be, too. Sometimes they would reluctantly accept a darshan of me as a poor substitute and I would feel rather accomplished about it.

And there were some extraordinary fans. For years, we got desperate letters from a young man who believed that my mother was really his mother. Finally, his parents brought him to Hyderabad to see her. A famous psychiatrist was called in. Somehow, it worked out and he adjusted to being a normal fan. And, for her part, I never saw my mother tire of her fans. Once, I shut the blinds of a train we were on and she scolded me, saying it was because of them we were who we were. That is why perhaps she was called the ‘peoples’ actress’. And little wonder too that she took to politics naturally, daring to challenge NTR when few politicians could afford to. The NTR-Jamuna battles of the 1980s were in retrospect hilarious and charming. The local papers caricatured them as Krishna and Satyabhama, their most famous roles together. I remember many nights studying for the ICSE exams, waiting for her to come back from her campaigns. Sometimes, it could be worrisome, like reading in the paper that her convoy had been attacked. That, too, was not always what it seemed. Years later, one leader from her own party casually confessed he had told his men to throw a few stones at her to provoke an angry speech. But then, even as children we had nicknamed her ‘Lioness’. That sort of stuff could never deter her.

My mother acted in about 200 movies, in four languages, and won dozens of awards. She got elected to Parliament. Now, at 75, she has become an elder figure of sorts in the Telugu world. She is on TV almost every day and busy being honoured in public programmes. As for me, I find people still smile when they learn I am her son. But I also notice a change in their responses. The smile is not just about her stardom, but about the world they associate with her, about Missamma and Satyabhama, about an aesthetic of innocence. Their smiles seem to say, “There was something nice in our movies and lives once.”

But the past is never only about nostalgia. Someone or something, maybe the god who watches over children of the movie world, picked up a piece from the cutting-room floor of history to start a whole new show. This story begins in 1978. It was the premier of Shankarabharanam. The industry turned up in desperate excitement to see it. The preview theatre at Savera hotel, where we often stayed, was packed. But my cousin and I were too familiar with the place to be deterred from our usual game there, which was to roll down the plush aisle screaming. Our creativity was, of course, rebuked and we were forced to sit quietly. Twenty-five years later, I met someone who was also there in that theatre on that day. Her uncle had written the movie’s famous songs (Veturi garu, the legendary lyricist whose recent passing led to a torrent of violently melancholy poetry from his bereaved fans). Incredibly enough, even for a child of an incredible world, the first thing she said when we discovered this long-lost coincidence was simply that a couple of boys had created havoc at the screening. I am pleased now that I, someone who never acted in a single film, not even a fleeting back of the head shot as Dhruva like the protagonist of my novel, made an impression on another child that was remembered decades later. I am pleased, too, that our one-year-old carries himself with a majesty that being Telugus we compare inevitably and only with NT Rama Rao’s. And I am pleased most of all when people tell me nature sometimes skips only a generation, and what I hold in my hands, diapers and all, is nothing less than the future golden age of Indian cinema.