A Passion for Football

Santhosh Kumar lives two lives and does not even wear a mask. As an auto-rickshaw driver in one and a no-nonsense, FIFA-accredited referee in the other 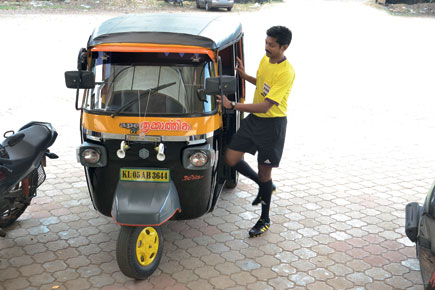 Santhosh Kumar lives two lives and does not even wear a mask. As an auto-rickshaw driver in one and a no-nonsense, FIFA-accredited referee in the other


MB Santhosh Kumar, an auto-rickshaw driver from Kerala, broke the hearts of 30,000 football fans in Salt Lake Stadium, Kolkata. On that hot and humid Sunday afternoon in May, he yellow carded José Ramirez Barreto, Mohun Bagan’s captain. This was no ordinary match. Barreto was playing his last match for Mohun Bagan and emotional football fans had turned up in strength that day to bid him farewell. Santhosh, a FIFA-accredited referee, says he was only doing his job.

The entire stadium erupted when he showed the card. He even had an argument with Barreto. But Santhosh was unmoved. He has no regrets. “I did exactly what I was supposed to do,” he says in a matter-of-fact manner.

Santhosh has many such experiences and he relates them with relish during football’s off-season, when he goes back to Kottayam, Kerala, where he drives an auto-rickshaw to earn a living.

So far, he has worked as a house painter, driving help for truck drivers, a taxi driver, and a technician with Eureka Forbes, even sold CDs during the Sabarimala pilgrimage season. But he did all this only during the off season. During football season, he is to be found on the field. Even now, despite the fact that he is a FIFA referee, he is working two jobs.

Besides driving an auto-rickshaw, he also works as the caretaker of a multi-storied apartment block in Kottayam town. But like all his previous jobs, he is open to giving them up if the need arises. Football is the only constant in his life. Even now, Santhosh regularly takes a break from both his jobs to passionately pursue his actual calling—officiating at football matches.

Santhosh’s passion for football started very early in life. “I grew up in a soccer-friendly environment. I used to go to the nearby stadium with my elder sisters from the age of three or four,” he says. His mania for football worried his mother. “He only wanted to play all day. He was least interested in studies. We were very worried about the boy,” she recalls.

But Santhosh brushes those worries aside. He says that he had scored fairly well in his Class X board examination. Eventually, his parents started encouraging his love of football. “By age 15, we realised that football was going to shape his future,” says his mother Kamala Bhaskaran, who finally stopped worrying about his studies when he started showing signs of football brilliance in his early teens.

But parental pressure was not the only hurdle to his football ambitions. Santhosh’s father was a daily wage worker, and he could not buy the boy a football kit. Santhosh grew up playing the game barefoot.

“I bought my first boots with my own money,” says Santhosh, recalling those early days, “I got a scholarship in the eighth standard for being an all-rounder.” The scholarship amount was Rs 150, which was a big sum but not enough to buy football boots. “I had to pay Rs 165 for a pair of boots. My uncle gave me the rest,” he says.

It may seem extravagant to some that a poor boy spends all his scholarship money on buying football shoes. In any other place this may be so, but not in Kottayam. This town is crazy about football. The Nehru Stadium here regularly hosts district- and state-level tournaments. “Here everybody—men, women and children—go to the stadium to watch football,” says Santhosh.

Football is Kerala’s favourite game. Almost every city has fan clubs of Latin American football teams. Whenever major football tournaments are held anywhere in the world—be it the World Cup, UEFA Cup or Copa America—people join in, cutting across class and religious boundaries. They love to take part in street parades wearing their favourite teams’ jerseys, holding placards of their football stars. But Santhosh was not just another Malayalee youth who dreamt of football all day. He was determined to make the most of his passion, no matter what hardships and setbacks he would face.

Santhosh recalls that he received a setback in the very first ‘serious match’ that he played. It was a sub-junior match in 1989, and he was representing Kottayam district. His team had scored five goals, but still had to forfeit the match. The authorities had found that an over-aged boy was playing for his side, and they disqualified the entire team. In the following years, Santhosh played for the adjacent Pathanamthitta district. “My team won the inter university South Zone match in 1994 where I represented MG University,” he says proudly. He played actively during his university days. It was only in 1996 that Santhosh decided to dabble in refereeing.

Around this time, he tore a ligament in his right leg and decided to focus more intensely on refereeing than playing football. Regardless of the injury, Santhosh says he continued to play for eight more years.

In the meanwhile, Santhosh cleared the required exams and was ready for his new role. “I started my career as a Class III referee by clearing the test in 1996. In 2004, the AIFF (All India Football Federation) confirmed me as a national referee.” He officiated his first national match in 2005, a Santosh Trophy encounter at the Chandrasekharan Nair Stadium, Thiruvananthapuram. “It was between Nagaland and Andhra Pradesh and I would say that it was a really tough match to be with the whistle,” he remembers. It is challenging to referee a match that has a team from the Northeast, he says. “They are tough people, difficult to handle. But I think it is natural, considering the political and social disturbances in those states. However, despite the political unrest, the future of Indian football lies with Northeastern people,” says Santhosh, “In the Northeast, stadiums are packed and overcrowded for every match. I haven’t seen such crowds even in Kerala and West Bengal.”

After becoming an AIFF-approved referee, his next career goal was to be empanelled as a FIFA referee. The first match he officiated while wearing a FIFA badge was between JCT Mills and East Bengal in January 2011, at the Salt Lake Stadium. Since then, Santhosh has refereed more than 50 matches. He particularly remembers the last match that Baichung Bhutia played. It was an exhibition match with the German football club Bayern Munich. They thrashed India 4-0. “India lost the match badly, but for me it was a historic affair. Bhutia played up to the 85th minute, before being replaced. He received a standing ovation from 40,000 emotional spectators.”

Santhosh thinks that football is more of a passion than a game. You indulge in it for the countless moments of excitement it gives you. Refereeing is a more serious affair than playing, and it demands meticulousness at every level, but that does not mean that referees are emotionless. He remembers an assistant referee who began dancing with the crowd after a goal was scored: “There was a brilliant penalty kick at the end of the match, and he could not stop himself from dancing. The crowd in the stadium loved it, but the referee had to face disciplinary action.”

Santhosh is clear that action should have been taken against that errant assistant referee. But he also admits that he often gets as excited during a match as that dancing linesman. He remembers that “there were many heart-throbbing moments during Mohun Began’s last match under Barreto’s captaincy. The crowd was chanting ‘Barreto, Barreto’ throughout the game. Overwhelmed by emotion, he tried to get across to entertain the crowd and also had an argument with me. The argument ended in a yellow card.” Santhosh understands the rush of adrenaline in such moments, but he also knows that a referee is on the ground not to enjoy the game, but to ensure fairplay and that it goes smoothly.

To do his job, he has to balance his passion with his professional discipline, something he does off-field too.

His day starts at 6.30 in the morning with practice at Nehru Stadium. Then he runs through the books at Skyline flats, where he is the caretaker, and returns home late in the evening after dropping off the last passenger in his auto-rickshaw.

Achu S, Santhosh’s friend and an executive member of the Kerala Football Association, thinks that Santhosh is born in the wrong part of the world: “It is sad to see such a talented person doing menial jobs to make ends meet.”

But Santhosh does not mind it. He is completely at ease flying from city to city during the football season, and driving an auto-rickshaw in the off season. “There is no point in worrying about such things,” he says, “We have to live life as it is.”