A Lifetime in Ink

A travelling tattoo artist, Isa EsAsi carries memories of the many friendships she made across the world on her own body 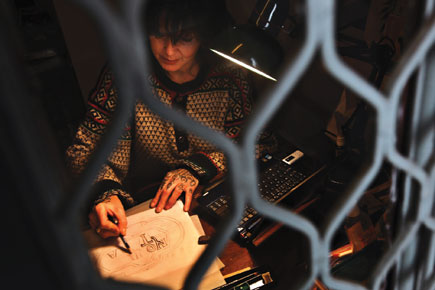 A travelling tattoo artist, Isa EsAsi carries memories of the many friendships she made across the world on her own body


Over 30 years ago, I started as an apprentice tattooist at a famously infamous ink joint in the heart of the Amsterdam red light district. We were situated in a cellar, under a noisy, smoky biker-bar. In those days, tattooing was not fashionable, as it is today. It was the domain of sailors, soldiers, outlaws and travellers. The tattoo trade was a traditional guild. To be admitted into it took stern training. It was hard to find a master who would accept an apprentice. And at the start, it was all about sweeping the shop, making coffee, tracing stencils, soldering needles, keeping secrets and endlessly watching the hand of the master. This is how I started.

It turned out to be a 24/7 education involving long days in the cellar and longer nights in the harbour bars listening to the stories and adventures of old masters, getting along in a respectful manner with all types of characters and learning about life in general.

In those days, I went by the nickname Morbella because I liked to dress as a vampire. Tattooists were a different tribe. Like all marginal communities, we had our own codes of honour and respect. And compared to today, we were then also a smaller community, and all of us worldwide knew about each other. As a result of ever-improving techniques, inspiration from different cultures, positive media portrayals and working together, we managed to make tattooing acceptable to a wider public and turn it into an art form.

Nowadays, tattoos are accepted almost everywhere. Some places, like India, have never been prejudiced against tattoos, since it’s a land of great visual creativity and cultural variety. Other countries, such as Samoa or Japan, have an ancient tattoo culture. But many other populations have had to slowly learn to appreciate the concept of decorative tattoos. Of course, it is commendable that quality and hygiene have improved. But that aside, I love the old school ways, where the inspired meaning and emotional moment are more important than the actual aesthetics of a design.

Look at me—you can’t judge my creative skills by the work I display on my own body. I’m a fine artist, I can do any style if I have to, but I enjoy my own ink to be ‘ruffy-scruffy’ and full of personal meaning. My body carries a whole gallery of tattoos done by friends who had never tattooed before. We did it for the pleasure of marking a special moment in friendship.

Among many favourites, there’s ‘Anton the Dog’, tattooed by a seven-year-old girl. Anton, my dearly departed Shih-Tzu, even had his name tattooed on his own stomach, Dogfather-style. There is the anchor of Aces, done by my courtesan sister of hearts, when we once traded jobs for a day—don’t ask me who had a harder time doing that. Then, there’s my Italian friend, the light middleweight champion who won the world title in 1977. He tattooed his name and boxing gloves on my leg. There’s the gun by my French Foreign Legion mercenary, minarets of Melilla under moonlight by my Sergeant of the Spanish Legion, and also the numbered fish-eye by my famous-in-Spain photographer friend.

Inked professionally, yet no less sentimentally, is, on my right hand, ‘half-a-missus-sugar-skully’, cousin of the ‘half-a-mister’ on the hand of my ink-and-soul brother in Oslo. The words ‘Riders on the Storm’ are there to commemorate a long lost but finally recovered friendship with a person who used to make me listen to that song a lot. He’d say: “Those lyrics are life itself!” On my leg, there is a revolutionary Mexican sugar skull, in memory of my lovely radical grandmother who rests in peace; it was inked by a colleague and friend from Aztlán.

Then, there’s my very special ink adventure at Puttaparthi village, where the saheli (girlfriend) of a dhobi (washerman), wife of a snake charmer and mother of nine, put lamp-soot in a coconut bowl, mixed it with a fierce spray of mother’s milk straight from the source, and, using three needles tied with a thread, made the loveliest traditional tattoo on my skin. Outside her hut, there were snakes dangling, her baby crying over spilt milk, startled tourists rolling their eyes and 20,000 flies buzzing. She made me a bichhoo (scorpion) like her husband was wearing, a mandala like she had on her own arm, a flower, and the very ‘Eyes of God’. And then, the ink was finished. Soon, it all healed beautifully and became the ink I most cherished. That is, until ‘Mercedes the Bheins’ arrived.

That was a memorable moment. I had always wanted a Mercedes, but how was I to make that happen? I sang for many years, “Oh Lord won’t you buy me a Mercedes Benz?” but to no avail. I had to come to India to see the light. Now I could get a bheins (buffalo), and call her Mercedes. Orijit Sen, a talented graphic-novelist and, fortunately, also my friend, made her come to life, stitch by stitch, sweating ink and blood, rum and bullets. Amid memorably joyous celebrations, the buffalo was born on my leg. Now, that is my latest and greatest ink treasure.

I have been speaking of old-school nostalgia, and I could tell you about the great professionals I have exchanged ink with, the lovely world-wise fellow artists I have met, the popular personalities who bled under my needles, and the many other adventures of a travelling inkster. But that will have to wait for another occasion. We say that tattooing is as ancient as time and modern as tomorrow. It is a reflection of our inner lives because our souls are tattooed with memories, pain, pleasure and learning. We all have footsteps on our hearts. But when those emotions escape from their hiding places, grow and flower onto our skin, like a jungle of intricate patterns, then it is not mere decoration, but the very ancient spirit of tattooing that comes alive to strengthen our little human identities. It makes us shine brighter, just like the little jewels that we all are in the eternally varied and colourful kaleidoscope of time and humanity. Some of you might wonder about the pain involved. To that, I say “Life hurts, tattoos don’t.”

In pace with natural evolution, I have become a wise old Ink-Aunty. My name has changed to Isa EsAsi, which means, ‘Isa is like this only’. While all kinds of pain, paint and other creative materials come and go, I like to keep the stencils of the tattoos I have done. Over the years, I have collected quite a few and sometimes use them in other art projects. Looking back at those designs, I seem, to my surprise, to remember every person I have ever inked, as I suppose they will forever remember me—even though ‘forever’ is a mere human lifetime.

I am thankful for this trade that demands so much creativity and gives in return the freedom to travel and meet such a brilliant diversity of people who live on our small but amazing planet. Above all, it gives me a means to escape, for a moment at a time, from the artificial divisions of nations, borders and politics, and to happily submerge myself in a world of universal human emotions mixed with art and ancient culture. This art provides a place where we are all equal in our wishes, desires, pains, pleasures, fears and, above all, courage, and where we just look for a chance to express our humanity—united by a lifetime in ink.