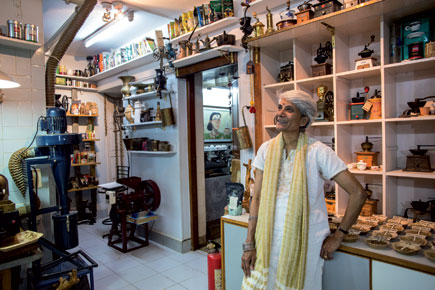 
All that seems missing when Sunalini Menon begins her story is some classical Carnatic music in the background—if real life came with soundtracks. Some raga and thala would fit in perfectly with her memory of growing up in a traditional household where mornings always started with the smell of freshly brewed coffee.

Her grandmother would walk down a long street to a mill where a man would powder coffee beans using an old grinder. A heady fragrance would waft out of the grinder and dissolve in the room before it could be packed in with the coffee powder. Menon’s grandmother would make a tall jug of coffee and pour it into a silver samovar-like vessel, which would be standing by the table when she and her sister woke up and came down at 6 am. Not that they were allowed coffee; growing up, children had to have milk.

This smell, taste and the forbidden feel of coffee was what Sunalini Menon, among Asia’s first woman coffee tasters, grew up with. That childhood love of good old South Indian filter coffee and life’s other little quirks has today made her a bit of a celebrity in the coffee industry.

My eyes keep darting to a gorgeous collection of silver bangles she wears stacked on her wrist.Menon is telling me how it all happened, how she did all that she has done, pausing to say that after she married someone from Kerala, she also began drinking tea.

Having studied to be a food technologist and wanting to get into dietetics, she got herself a place at an American university. “I happened to see an ad in the papers about an opening at India’s Coffee Board and applied, because I figured I would at least learn what it was like to give an interview,” she says. In that typical government set up, in the early 1970s, she was bluntly told that she wouldn’t get the job because women usually resigned after getting married, and the Board didn’t want to train her before she did just that: resign. One person on the interview panel stood by her, though, and some tough decisions about the US versus home turf later, Menon joined the Coffee Board.

She dismisses the drama that ensued with a laugh: how her employment turned into a Karnataka versus Tamil Nadu state feud among the staff—no one wanted to take orders from a girl and they didn’t see why someone from Madras had to be brought in to fill a post in Bangalore. But Menon remembers crying every day once she got home from work and says it was a hard journey. “I decided that I would spend time in each department. That way, I got to know everyone and everyone taught me what I needed to know. I learnt how to deal with people,” she recollects.

The next hurdle appeared once her boss retired, just when she had finished training. Menon was 21 years old. By the time she was 23, she was heading the quality control department at the Coffee Board. Predictably, that was a whole different battle, she says.

Good timing has marked Menon’s career. By the time she had put in two decades of Central government service, India’s market was being liberalised. The quality department she was heading was dismantled. “We gave ourselves a farewell party,” she grins, “there was no one else to throw us a party.”

In a long-distance marriage throughout, she was all set to use the downtime to be with her family when coffee growers in the state insisted she stay back. “That was how Coffeelab began, with just five others, two of them from my old department at the Coffee Board. People laughed at me at first, because coffee prices were high and quality wasn’t much on anyone’s mind. We couldn’t balance our books at first but things came around slowly,” she says.

Today, Coffeelab Private Limited, based in Bangalore, is the only independent lab in the country doing purely lab work. Samples come in from all over the world. There are several kinds of coffee beans, and coffee powder is often dispensed to friends, visitors, even passers-by. Every visitor gets to sit in an interestingly decorated front room of the house that serves as her lab and sip predictably delicious coffee. The lab is also a coffee museum of sorts. There are coffee mugs from all over the world; the tightly lined shelves groan under bags of beans, vintage brass coffee filters, antique grinders from Turkey and Russia, and other paraphernalia. The air smells of coffee and the coffee addict in me lets out a silent whoop. “Our clothes, our hair smell of coffee by the end of a work day,” Menon says, though she doesn’t look like she minds.

The team goes to rural places to test and evaluate coffee. “We carry almost the entire lab with us because we never know what we will get on the field. Over the years, even the cab driver we always go with has learnt about coffee tasting and tells farmers what they should be doing!” she quips. Coffeelab often holds training sessions and coffee appreciation workshops as well.

Between promoting Indian coffee and creating blends for coffee chains and managing the activities of the lab, she also teaches at Università del Caffè, Illy in Trieste, Italy. Every now and then, she slows her narrative to linger upon memories of people: a professor in Switzerland who spoke only Swiss German and who, at age 70, took evening English classes for a year to be able to teach her, his talking parrot Coco, mentors, family, friends, farmers.

What does it take to be a good coffee taster? “You have to have the ability to describe what the coffee tastes like. It is all about establishing credibility, so you can’t get away fabricating notes,” Menon says, explaining how the vocabulary to define notes of coffee is borrowed from that of wine. She was among the first few women in the world to be professionally ‘cupping’, or tasting, coffee. That club is still small, but the industry is more open these days. “There aren’t any rules to follow, but you need to preserve your palate, and that means no smoking, no drinking, no late nights if you have to taste early in the morning. You never know what to expect. Every coffee offers something new every day,” she says.

With her exacting standards, it must be hard to get a good cup of coffee elsewhere, I say. Menon grins and admits that she tries not to drink coffee outside. To her, Ethiopian coffee is the “most beautiful”—for its lasting finish in your mouth, for its inherent notes of jasmine with lemon grass. A good coffee, she says, is something that leaves a lingering note on your palate. Ideally, without milk, without sugar. “But then it depends how you take yours,” she says. I mentally raise a cup to that.