Waiting for an English Narendra Modi 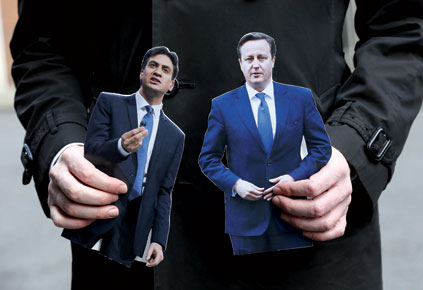 The Lion and the Unicorn fought for the Crown

The Lion beat the Unicorn all over Town

Who is the Lion and who the Unicorn as 46 million British voters—no, 39 million, for seven million haven’t registered— shuffle unenthusiastically to the 7 May poll? With their clean-cut features and sharp-cut dark suits, David Cameron, the Prime Minister, Ed Miliband, whose favourite sentence is “When I am Prime Minister” and who notoriously did his brother out of the job, George Osborne, Chancellor of the Exchequer, and Nick Clegg, Cameron’s coalition partner and Deputy Prime Minister, resemble dummies in the same bespoke tailor’s shop.

Even they can get confused. Anyone who goes to bed with Nick Farage, says Cameron, would wake up with Miliband. Farage’s loud striped suit and velvet collared overcoat betray the outsider. He leads the United Kingdom Independence Party and is author of The Purple Revolution which has been called ‘the most inspiring book since Mein Kampf’.

This is the promiscuity of the coalition politics India suffered —or savoured—for 35 years until Narendra Modi. The empire has struck back. The Cameron-Clegg government was Britain’s first coalition in 64 years. Now, it could be the pattern of the future. But only Clegg publicly admits there can be no clear winner. A friend from my old university who works for the BBC wistfully wishes a stable coalition were on offer on voting day to avoid subsequent horse-trading.

Continental Europeans won’t be surprised. One reason they kept Britain out of Europe for so long was the conviction that the Indian connection had left Britain somewhat less than European. Not that India was ever an absorbing political interest: veteran parliamentarians say nothing emptied the House of Commons more speedily during the Raj than a debate on India. Yet, India persisted at many levels of consciousness though the links have always been more personal than institutional. “It’s a dooty, isn’t it?” my landlady asked in 1954 when I wore Bengali attire for the Lord Mayor of Manchester’s reception for foreign students. As a mill manager’s daughter, she knew all about tackling the challenge of khadi by turning out coarse cloth that looked as if it had been spun and woven by hand.

Language is of course the great giveaway. “Chapati time!” my chief reporter on the Stockport Advertiser—a young man in his early twenties then—would yell when it was time to break for lunch. Neil had never set foot in India but the Argyll and Sutherland Highlanders with whom he had done his compulsory National Service had. The regimental dialect was peppered with Hindustani. Another colleague’s little girls gathered their towels and trotted off to their gosul before school. Something for nothing was ‘buckshee’ (from baksheesh) and someone who was off his head was ‘doolally’, after the sanatorium at Deolali. Other words reflected a higher class. At an English country house lunch on Palm Sunday my titled hostess served what she called “pheasant Simla”. Her mother-in-law, a countess with royal connections, had taught her to cook the stew with lashings of cream. It was the kind of house where kedgeree appeared on the sideboard for breakfast, and the children rode at the gymkhana races.

The British are as addicted to TV as Indians. Harold Wilson’s nervousness that Labour voters would prefer Steptoe and Son, a popular sitcom with 28 million fans, to voting in the 1964 election reminded me of India coming to a standstill when Doordarshan screened Mahabharat. Wilson asked Sir Hugh Greene, the BBC’s director-general, to screen “Greek drama, preferably in the original” instead. He knew Labour taste. If Cameron faced a similar dilemma, he would probably want Downton Abbey which is popular with anyone with a yearning for high society to be taken off.

In the event, Greene postponed Steptoe and Son to nine o’clock, when voting ended, giving Labour its first government in 13 years. But the majority of only four brought its own difficulties with the government defeated on one famous occasion because some members were in the lavatory. “Oh dear, Oh dear! What can the matter be? Three old ladies locked in the lavatory!” sang the Tory benches.

Parliament has changed since I used to cover it in the 1960s. The only non-White face in the Lords then was the elegantly draped Bapsy, Marchioness of Winchester. The gossip was she haunted the peeresses gallery because her bedsitter didn’t have central heating. I returned to the Lords the other day with Giles, Lord Radice, who had attended Miss Higgins’ school in Calcutta when his father was a businessman there and whose grandfather was in the ICS. Many of the South Asians revelling in being called ‘My Lord’ and ‘My Lady’ wouldn’t have looked out of place behind a corner-shop counter. The transformation was first evident several years ago when a bearded man in cap and loose pyjamas appeared in the Lords tea room. Noticing my surprise, Lord Meghnad Desai promptly called out “My Lord! My Lord!” and presented me to an ennobled community leader from a small Lancashire town. In India he could have passed for an old- fashioned khansama. I suppose that’s what is meant by calling Britain the most democratic of aristocracies and the most aristocratic of democracies.

There wasn’t a flicker of surprise when Keith Vaz nudged Cameron with an obviously planted question: what election tips had he picked up from Arun Jaitley’s Budget and Amitabh Bachchan’s showbiz since he had chatted with both when Mahatma Gandhi’s statue was unveiled? It was Cameron’s cue to lavish praise on Gandhi, India and Modi. “What he hopes to gain I can’t imagine!” a retired British diplo- mat grumbled. Perhaps it’s another sop to Britindian voters, like visiting the Hindu temple in Neasdon, said to be the largest outside India, and dressing his wife up in a sari.

The new India, tax-dodging and corner-cutting, matches the new Britain. When a London daily mounted a sting operation against a rising Liberal Democrat suspected of being less than candid about his election kitty, the reporter posed as a successful but not very scrupulous Indian businessman. Gifts of more than £7,500 have to be disclosed to the Election Commission and the law forbids intermediaries “to evade the controls on permissibility and transparency.” But our make-believe Indian was prepared to issue backdated cheques and route donations via fictitious ‘cousins’ when a senior Treasury official promised to “open doors” and was “very helpful” with contacts. What would HL Harrison, the Calcutta Commissioner of Police, who reported to Bengal’s lieutenant-governor that Lal Mohun Ghose, the first Indian to stand for the House of Commons, was a “pucca beast”, have to say about Afzal Amin, the Tory candidate for a Midlands town who had to step down after being caught out trying to foment race disturbances so that he could pose as peacemaker?

The swings and the merry-go-round sometimes balance each other. Earlier, the Tories acquired a member of the European Parliament who neatly switched sides on the day the UKIP suspended him for ‘a number of extremely serious issues— which include unanswered financial and employment questions.’ UKIP’s present worry is over charging £3,150 for an event that cost £950. A Lib Dem grandee, Lord Strasburger, quit over revelations regarding undercover businessmen. Labour’s problem is seriously semantic. Having denounced the Tories as the “party of Mayfair hedge funds and Monaco tax evaders”, Miliband must explain his connection with a hedge fund boss who gave Labour £600,000 in three years.

Cameron and Osborne claim the Tories reduced taxes. They didn’t, retorts Miliband. If they did, boasts Clegg, it was only because of Lib Dem pressure. Together, the two big parties may not account for more than 60 per cent of the May vote. The last opinion poll showed that 40 per cent of voters hadn’t made up their minds. UKIP, the SNP, the Greens and Plaid Cymru, the Welsh party, are all waiting to strike bargains. Scottish independence is up for sale to the highest bidder with the Scottish National Party’s Nicola Sturgeon publicly supporting Labour and privately preferring the Conservatives. Fracking and nuclear weapons are negotiating points. Despite grumbles, quitting the European Union is a non-issue. Once upon a time, idealistic Angry Young Men grieved ‘there were no brave new causes left’. Causes are irrelevant now.

The only issue with the potential to arouse passion is also one the British firmly reject. They know Farage’s creed could do infinite damage to the fabric of a nation that takes such pride in the remains of the last Plantagenet king, Richard III, being ceremonially reburied in England’s most multicultural city. Leicester’s Sikhs and Muslims profess admiration for the dead monarch whom Shakespeare vilified. Immigrants, whether from the Afro-Asian Commonwealth (as in the past) or the European Union (as now) may be an irritant, but few will betray British tolerance and hospitality by voting for UKIP.

While the play and players are at sixes and sevens, there is ambitious talk of rebuilding the theatre. Some want the new Houses of Parliament located outside London with Manchester, the region Osborne promises to develop as the ‘Northern Powerhouse’, a distinct favourite. Although Greater Manchester is solidly Labour, nestling in its southern folds is the safe Tory constituency of Tatton that the Chancellor represents. If Mamata Banerjee can invent Duronto expresses for Calcutta, why shouldn’t a British minister take Westminster to his constituency?

There hasn’t been much discussion yet on what the new Parliament should look like. But when the present Houses were built after the devastation of World War II, Churchill strongly opposed a circular chamber such as our Lok Sabha. He wanted parallel rows of seats separated by the length of two swords so that warring parliamentarians couldn’t lunge fatally at each other. This wasn’t only slavish dependence on tradition. Churchill was convinced it was easier for defectors to slide along a circular bench than to run the gauntlet of crossing the floor. A turncoat twice over, he knew what he was talking about.

But round or rectangle, with or without defections, whether the Lion wins or the Unicorn, a new age of political adventure lies at the end of an election that might also decide whether Britain is one country or several. That, too, sounds familiar to an Indian visitor as the British wait for their own Narendra Modi to bring back majoritarian rule.