Looking beyond the personal chemistry between Modi and Obama 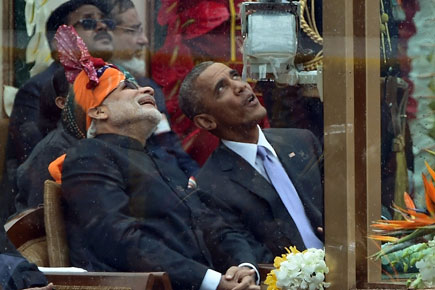 It can be argued that President Barack Obama and Prime Minister Narendra Modi have agreed to put together the contours of a strategic partnership that could define India’s place in world affairs in the years to come. But it would be unfair to ignore the contributions of their predecessors, George W Bush and Manmohan Singh, who had actually put the foundations of this relationship in place. Notwithstanding that, Obama was clearly looking for a ‘strategic partner’ in a world that offers little room for optimism—the Middle East remains unpredictable, America’s involvement in Iraq and Afghanistan has left things in a mess and Pakistan remains a perpetual migraine—and thus the needle of Obama’s compass was pointing toward India. His desire was further strengthened by the bipartisan political support in Washington, a capital known for fierce political rivalry on most issues, to build stronger ties with India.

Their personal chemistry was well established during Modi’s US visit last year, where Obama was willing to walk that extra mile, quite literally, to the Martin Luther King Memorial. Modi reciprocated that by breaking protocol and receiving Obama at the Delhi Airport. The hug that followed between the two had raised expectations on both sides about the possible take-aways from this historic visit by the US President as the chief guest for India’s Republic day celebrations. And even though many experts saw little room for flexibility to make the Indo-US civil nuclear arrangement operational, both leaders did exercise their executive powers to find a way around the bureaucratic logjam on the subject. It is now said that the ‘deal is done’. However, on a more realistic note, it will take at least a decade for US-made nuclear reactors to become operational in India. But the long-term benefits could be enormous for an energy- starved India.

This was one of the issues that was agreed upon in the 45 minute ‘chai pe charcha’ on the lawns of Hyderabad between Obama and Modi. And while agreeing that trade and business opportunities should only become better if the obstacles were removed, the key issue that came out of this meeting was, to the surprise of officials on both sides, the congruence of views on China— the biggest strategic challenge of the 21st century. Few had expected a definitive statement of intent against China to come from India, which has been historically adamant on guarding its independence in foreign policy. Most importantly, it took Beijing by surprise—China issued veiled warnings to both countries not to interfere in the South China Sea, which it regards as its backyard. But going beyond the traditional pronouncements of unhindered movement in those sea lanes—where Indian ships have been challenged by the Chinese recently—the US and India have decided to act together to limit China’s dominant ambitions in that prosperous region with highly sensitive maritime lanes servicing Japan, the third partner of the Indo-US vision for Asia Pacific. China’s rise and its military ambitions—often adopting ‘in your face’ initiatives—have worried India for years now.

The establishment of military ports in Myanmar, Sri Lanka and Pakistan, its repeated border intrusions in Ladakh and Arunachal, and the arming of Pakistan with nuclear weapons and missiles, couldn’t be ignored by New Delhi anymore. But a contradiction in America’s approach is the double standard it still employs in its dealings with India and Pakistan—in a way, like the role it plays in the Middle East, where it backs Israel and is a country that almost all Arab regimes lean towards. So while Pakistan didn’t qualify for an Obama visit because of the mess it is in (just like the Chinese president avoided it last year), America’s Secretary of State John Kerry headed for Pakistan just after the Vibrant Gujarat summit. Kerry is the co-author of the Kerry-Lugar Bill and has many friends in Pakistan, including their army chief General Raheel Sharif, with whom he, like his predecessors, spends a great deal of time, both in Pakistan and when they visit the US. Pakistan thus chooses to ignore routine US warnings against its tools of terror. But Pakistan’s armed forces were carefully noting which technologies the US will be willing to transfer to India as part of the renewed Defence Trade and Technology Initiative (DTTI).

For the moment, America and India have agreed to take baby steps for the joint manufacture of modest ‘path-finder’ projects to achieve Modi’s goals of making India’s defence industry sufficiently equipped to provide the bulk of India’s armed forces’ needs. Currently, India is the world’s largest arms importer, but that also indicates that India does not make enough to meet the needs of its military men. This must change if India’s industry is to get back a reasonable portion of the $250 billion that is planned to be spent on defence modernisation over the next 10 years. While US companies have been clearly eyeing a large part of this defence pie and have been visibly upset over losing out to the French for the ‘mother of all military deals’, the nearly $20 billion order for 126 fighter aircraft has been given to the French Rafale. For the moment though, Obama and Modi—clearly on the advice of experts, and without intending to upset Russia, overall still India’s largest defence partner—have decided to go in for a transfer of technology with the not so sensational UAVs and anti-tank missiles. More could follow with the joint production of the A-10 Warthog close support fighter planes, helicopters and technology for future Indian aircraft carriers.

However, India’s biggest challenge is to get Pakistan to stop using the terror groups it has nurtured as strategic assets, and to get Pakistan to dismantle the safe havens they still enjoy. Having earlier agreed to help stop the flow of funds to terror outfits like the LeT, JuD and D-Company, the US has once again warned Pakistan to confront them or face US-led penalties. For now, India cannot expect more, since Pakistan is still a US ally, and the US needs Pakistan in Afghanistan. But equally important for India and the US is the future of Afghanistan (where India has made investments worth $2 billion) and the rise of Islamic terror groups. But unlike the topic of China, on which India and the US agree, here there are still differences to be overcome.

Indians are of the view that in West Asia, they could at best help clandestinely, and in Afghanistan, India would be unwilling to put its military boots on the ground. A decade ago, when there was talk in the last NDA Government to induct Indian troops for Afghanistan, our military commanders had sought answers to three questions. If they were to be inducted, then who would they be under the command of—the US or the UN? Who would pay for their expenses—India, the US or the UN? And what would be the timeline for their exit? The Government had no answers for these then, nor would they have now.

But above all else, what alarms Pakistan is America’s decision to put its eggs now in India’s basket, and the fact that Obama has reiterated his earlier stance that India should be a member of an expanded UN Security Council. This has received sharp reactions from Pakistan, on expected lines, for whom the UN resolution on Kashmir, unimplemented because of Pakistan’s rigidity, remains an article of faith and a pillar of its strategic discourse, specially against India. However, for more than 52 years now the UN has refused to discuss this resolution and instead asked Pakistan to solve its problems bilaterally with India. Pakistan offers little hope to the US and the world and is now getting ready to hang on to Beijing’s coattails to avoid global isolation, but even then both India and the US cannot ignore the nuisance that is Pakistan.

President Obama had earlier stated, “I believe that the relationship between the United States and India will, in fact, be one of the defining partnerships of the 21st Century.” The operative word in that statement was ‘partnership’, and it seems that this historic visit by President Obama has given enough room for optimism to most Indians. Modi has clearly pulled off a diplomatic coup and laced it with many layers of cream; there is the $4 billion promise of new initiatives to boost trade; the push for renewable energy, immigration reforms and those extra H-1B visas and desire to enhance bilateral trade four-fold. And even though India, like the United States, is an ‘idea’ and shares common ideals as a democracy, for the moment New Delhi is unwilling to be an ally—a term that many in the US would prefer—but a strategic partner.