JNU revolutionaries: Left out, left behind, left in between

Cosy in their make-believe, the revolutionaries of JNU campus are in permanent denial 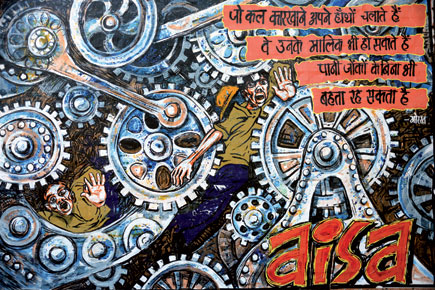 As an (a)political being who has frequently witnessed the frenzy of the political ramp, which is fully clothed to hide most discrepancies and sufficiently chocked by ‘questions of time’, ‘dilemmas of intent’ and the ‘dimension of facts and figures’, one is bound to be sceptical about the politics of spectacle.

Jawaharlal Nehru University (JNU) is acclaimed for its vibrant political culture that illustrates a range of protests, with posters and pamphlets that prioritise leftist sentiments, unlike any other institution of higher learning in India. Overarching ideological umbrellas are offered by several factions of the ‘leftovers’ of the left, and by all those who are allied to the left-front, left- behind or left-in-between. Protests here are well-packaged, limited-over editions of the revolution- about-to-arrive, even though these are consistent in line, length and linguistic patterns standardised to win student elections ultimately on the basis of traditional ties of caste, ethnicity and region. Independent voices are strategically silenced (‘If you are not with us, you are with them’). Looking elsewhere other than leaning leftward even with reasonable justification gets branded as ‘regressive’. Sports and the performance and visual arts are increasingly pushed to the fringes of campus existence; this is contrary to the scene at University of Delhi and elsewhere, where an absence—or marginal presence—of political activity dictated by party agendas typically coincides with greater student involvement in a wide range of co-curricular activities round the year.

The dominance of the rhetoric parade at JNU and its all- consuming facets leave no room for anything that is too far removed from the act of constant preaching to the already-converted. Academics is often reduced to copy-paste commands, and the campus is treated by a large section of students as the cheapest place in South Delhi to prepare for the civil services entrance examination. Heavily subsidised living conditions undeniably leave a lot of scope for intangible banter.

On the other hand, the exclusivity and authority of the prevalent intellectual snobbery, the hierarchisation by self- proclaimed egalitarians, the scholar’s burden of a need to problematise everything, followed by the imposition of academic ‘ways of seeing’ as the most legitimate ones, over and above the rest, results in the passive reading of texts, acts and images. Polysemic and ‘multiple’ readings remain confined to lectures heard or papers written on postmodernism.

It is almost impossible to hold a dissenting opinion against the culture of trivial dissent that undermines the complexity of issues, compelling one to carry the weight of sounding politically correct on matters of reservation quotas, patriarchy, neo-liberalism, development, justice and many more.

Words, images and actions that constantly invite readers to accept a multiplicity of meanings are often ignored because an obligation to the rhetoric obstructs the acceptance of variations in thought and action. As a result, there seems to be a recurrence of posed problems and their respective straightjacketed solutions. Wherever one pans or tilts, one sees the same problems-and-solutions embedded on top of each other on campus walls and individual minds.

Size of the revolution: A4 or A3, the size of the typical pamphlet or poster.

Place of the revolt: post-dinner meetings in a hostel mess, where short-cut relay revolutions or militant mimicries can be undertaken while ‘revolutionary delicacies’ and ‘verbose radical dishes’ are served.

The problematic themes and their imagined solutions remain unaltered, like the ingredients of a mainstream entertainer, over the decades. In a pre-election General Body Meeting, we are told that we are standing at a ‘critical juncture’ (as the nation always does before every JNU student union election). Sipping water from a Kinley bottle, the Guevara lookalike making a speech expresses his set of problems with classroom- beautification models, which he thinks are dictated by agents of the World Bank. Legs wrapped by Levi’s are apparently keen to take a series of steps to do something for the marginalised by being a convert for the time being. The comrade with her ever- ready Moto-G, E or X handset seems truly interested in simultaneous movements and acts of messaging. While Benetton-clad men of Marx roll a joint in the middle of this serious discourse, one can hear a hushed-up voice sharing fresh information on amazing discounts at the imposing mall across the road on the western front. Realising that time is running out for a ‘radical social transformation’, the comrades either get busy attacking the conspiracies of neo-liberalism or skip to explanations of how other factions of the left have lost their shine and only they have retained the richness of red ideology.

Their shared apathy for anything that is ‘market driven’ is restricted to public gatherings, anyway, and not applicable to their personal lives. ‘Consumerism’ is a filthy term to be subverted with full force even as the private self aspires to the ethos and items condemned.

The campus is currently on vacation. The long summer break is a nice time to visit JNU. One can peacefully sit in a public place without the chance of having to hear simplistic statements or sweeping generalisations on the current state of affairs from a comrade. The mess floor looks a lot less messy during and after dinner time, as aspiring revolutionaries thankfully take a break from reminding us how ‘miserable this world is’ and return to the establishment called the ‘monogamous family’ (the only institution with which they don’t seem to have any problem). They will duly revive their assembly-line political parades and resume their repetitious rambles the next semester to convert new entrants while they sip black coffee at a Barista cafe. Their cheap rooms of residence at this heavily state-funded institution called the ‘university’ will be waiting for them.

Campus comrades share a knack of showcasing high distrust for institutionalised roles only to get absorbed in them once they leave. Others stay inclined towards the Left and stay rooted in campus life forever, or take refuge in far-left thinking and get left out in the process, endlessly debating organisational differences. Consequently, an identity crisis is obvious, and what is even more obvious is a process of romanticising certain symbols of isolation and dissolution, which are then distributed as fruitful products of the ‘struggle’. Overlooking some of the essential issues related to the everyday life of students, most JNU leaders and their parties struggle instead against distant social evils and aspire to abolish these at the cost of prioritising the delivery of critical amenities that a residential campus sorely needs. The utterly lengthy and dreadfully complicated admission procedure is never a cause of concern. The fact that it demands assistance at every level, done by badge-wearers, ensures the making of a political choice at an early stage, thus opening up space for political initiation right at the start. The indebtedness gets intensified with massive delays in hostel space delivery.

An affiliation to the dominant party determines one’s circle of acquaintances, defines one’s presence and explains one’s position with no further ambiguity. By dangling the dream of an ethereal revolution and a possible political career (in parties with no national or regional significance), these groups try to gain an educated cadre base. And aspirants try hard to prove their credentials, done best by resorting to ideological abstraction, blabbering on about arcane points of argument or various forms of easy disobedience. Eventually, they lose much of their youthful radicalism only to accept established positions or turn out to be dreamers who like to believe that one day everyone will indeed be equal.

Displaying anti-establishment tantrums within the protective walls of the campus merely means flirting with the established and accepted schemes of protest in a secure space where acts of resistance are the norm. In a severe fight for visibility and votes, expressing party positions on every national headline becomes more important than travelling with these agendas beyond the university gates. As the list of problems and solutions fades as soon as one exits, ideas of ‘radical transformation’ or ‘reformation’—following the logic of the left and depending on your distance from the leftist epicenter—mostly remain confined to the campus, ready to be recycled and consumed all over again.

One fails to understand what great impact these words devoid of action would have on society at large, other than provide a measure of solace to those of a schizophrenic conscience disturbed by an inability to act on one’s belief. The luxury of staying circumscribed within a manufactured monopoly of ideals and monotonous dogma is not dangerous and misleading for students merely because it directs them towards an erroneous utopia of the highest order, but more because it has no commitment to converting words into an agenda of action.

The resilient wheels of pragmatism have repeatedly crushed such cherished ideals across the gates of the campus (east, west, or north, whichever one you choose to exit the university). Between the pamphlet of popular leftist sentiment and the pleasure of Classic Milds; between the fist raised for subalterns and the thirst for Seagram’s; between party benchmarks and the extra leg-space of a PVR multiplex; between the midnight candlelight command to ‘march on’ and the temptation to instantly facebook the image of the demonstrating self, there are too many paradoxes here.

But then, campus comrades have been disciplined to live in denial in their utopian sanatorium.