Why Hillary Clinton will survive the latest storm 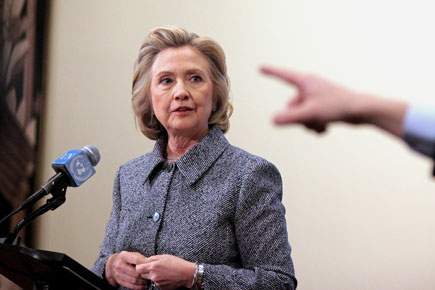 Irrepressible. Incorrigible. Indefatigable. Hillary Clinton is hogging the American airwaves as only a Clinton can. She is currently embroiled in a very American scandal, in which she stands accused of having used a private email account to conduct her business as US Secretary of State. Thousands of emails that dealt squarely with affairs of government were sent from a personal account, operated through an exclusively personal server in her home in Chappaqua, New York. This is being regarded by everyone except Hillary as an impressive ethical breach, one which has also made it very difficult (if not impossible) to ensure that all her communications remain on the historical ‘record’. How convenient for Hillary. Imagine sifting through the ‘trash’ of her email account! My, what a garden of earthly deletes…

The Americans are a fastidious people, earnest and moral in equal measure. Can you imagine a scandal such as this one in India? Practice of this kind would scarcely reach the level of newsworthiness, let alone moral or ethical turpitude. Hillary would be so much better off in India. But it is in America that she plies her trade, and it is by America’s standards that she will be judged. (As an exercise in public-interest journalism, why don’t the Indian news media look into how the country’s Cabinet ministers, chief ministers and state governors conduct their email traffic? The findings, I suspect, would make us blanch.)

In truth, Hillary will emerge from this scandal largely unscathed. American politicians are only felled by scandal when the offending behaviour takes no more than a sentence to explain, and can also be encapsulated in one resounding word. Exhibit Sentence A: ‘Bill Clinton had an affair with an intern.’ Capsule Word: ‘Monica’. Exhibit Sentence B: ‘The Nixon Administration broke into the headquarters of the Democratic National Committee.’ Capsule Word: ‘Watergate’. It doesn’t help the embattled politician if there also is an uncomplicated moral transgression: adultery in Bill Clinton’s case, and theft in Nixon’s, both breaches of Commandments.

The two scandals to dog Hillary in (or after) her time as Secretary of State both fail the single-sentence rule. By the time one has explained to Americans what she is supposed to have done wrong in the protection of her country’s diplomatic compound in Benghazi, Libya, most eyes have glazed over from the (highly disputed) detail. There is a similar problem with her email transgression, which involves an account of servers, data clouds, mobile devices and the Freedom of Information Act. Since neither scandal works at the level of a soundbite, Hillary has evaded (or will evade) lasting opprobrium, even though her defence in each case—and particularly in the case of the emails—has been self-serving and amorally pedantic. In other words, ‘Clintonian’, as the word has come to be used. It describes a lifetime of evasive locution and behaviour, designed to demonstrate compliance with the letter of a law, even as that law’s spirit is so obviously flouted.

One has to marvel at the Clintons. They have led lives of intense, almost baroque, complexity, littered with landmines of their own planting. They inhabit a moral obstacle course which they’ve navigated with aplomb, if not always with credit. In spite of her latest contretemps, Hillary looks set to be America’s first woman president, taking on in 2016 the job that should have been hers in 2008. In that year, Barack Obama robbed her of her tryst with destiny, cheating her of a chance to make history by making history of his own. There is a quiet consensus among Americans now that she would have made a better president than Obama these past seven years. Republican politicians tell me that, given the inevitability of a Democratic president in 2008, the wrong Democrat won. Hillary, they say, would have steered America’s ship more surely both at home and abroad. It is tempting to agree, especially in the case of America’s tattered foreign relations.

As a motley crew of Republicans kicks up dust in the prelude to the presidential primaries, it is easy to conclude that the only person who can prevent Hillary Clinton from making it to the White House this time around is Hillary Clinton herself. Jeb Bush of Florida, Chris Christie of New Jersey, Scott Walker of Wisconsin, possibly even Bobby Jindal of Louisiana, governors all, are not without virtue and ability; yet each of them is in some way irredeemably flawed, and each lacks the political ammunition to go into prolonged war with Hillary. (I refuse to take Senator Rand Paul of Kentucky seriously. Any man who questions the need for compulsory vaccination of children for measles—seeing the matter, instead, as one of parental choice —is a Libertarian Don Quixote, not a respectable candidate for president.)

There are 20 long months to go before America votes for its next president, and only a reckless gambler would bet on those months being entirely scandal-free for Hillary Clinton. The personal-email affair will not evaporate so easily, especially as many on the Democrats’ side—such as Maureen Dowd, columnist for The New York Times—are spanking her for it in public. But given the political drought in the Republican Party, and the chasm that separates liberals from non-liberals in America, it is hard to see even those Democrats who are unimpressed by Hillary’s missteps doing anything other than hold their censorious noses and vote for her. And having voted for her in 2016, it would seem impossible that America should not vote for her again in 2020. America makes history tectonically, not piecemeal. The first African-American president got his eight years. The first bluestocking American president should get her eight years, too.

Unless of course there’s another major scandal. But has there ever been one big enough to knock a Clinton off-stride?