The records of India’s first and only Linguistic Survey, conducted by the British Raj over 1914-29, are now up on the net, thanks to an impatient history professor 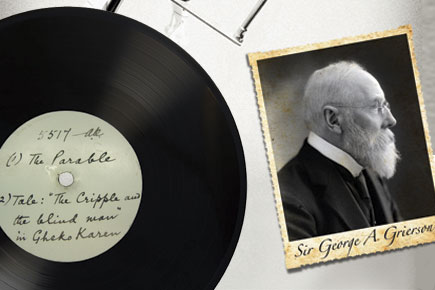 The records of India’s first and only Linguistic Survey, conducted by the British Raj over 1914-29, are now up on the net, thanks to an impatient history professor


It happened by chance. In 2004, after the British Library in London had begun the process of shifting to its snazzy new premises near King’s Cross Station, a set of 242 gramophone records was discovered in the dusty trunks of its vast archives. These were the sound records of the Linguistic Survey of India, carried out by the British Raj between 1914 and 1929. A total of 97 languages and dialects were recorded. This though is not a complete representation-the governments of Kashmir, undivided Punjab and the erstwhile North West Frontier Province refused to participate in the project. Requests had been logged for these records more than once, but they had been untraceable. Then one day, they were found. Just like that, as if they had always meant to be.

An email was sent out almost immediately to Shahid Amin, professor of history at Delhi University. This was a man who had been looking for these records from the 1980s, back in the days when he taught at Oxford University. “Everyone knew that they existed, but no one could locate the sound records,” says Amin.

The professor is an impatient man, with a penchant for audacious projects. “This is incredible material, I didn’t want it to lie in some stuffy library in the West where only research scholars could access it. The people who really know these languages might be living in a village,” says Amin. So he proposed that the gramophone records be digitised, all 242 of them, and put up on the net where everyone could access it.

Six years later, with the help of a US federal grant, the University of Chicago and his own resourcefulness, Amin’s big idea has materialised: https://dsal.uchicago.edu/lsi/ has all 242 gramophone recordings, categorised by the language group it belongs to, the year and place of recording. And it’s free, open to all.

The brainchild of a British civil servant George A Grierson, the Linguistic Survey of India was conceptualised in 1894. Ostensibly, it was an administrative exercise, the kind the governance-savvy British excelled at. It was, after all, they who carried out India’s first systematic census in 1881 for a population that then numbered 220,654,245-little over 220 million. The LSI recordings were meant to help train new entrants to the Indian Civil Service. But old man Grierson was an academic at heart, and the survey was a serious anthropological and linguistic project, undertaken with typically British attention to detail, generous funds and enormous patience.

The recordings began in 1914, but it was only in 1920 that the exercise gathered momentum. There was a World War in the intervening years, which left the sole gramophone operator appointed stranded in Europe. By then, Grierson had retired to his cottage in Camberley in Surrey, but he supervised the work from there. He picked a passage from the Bible, the Parable of the Prodigal Son, for every speaker to read out in translation,  because “it contains the three personal pronouns, most of the cases found in the declension of nouns, and the present, past, and future tenses of the verb”. This apart, the chosen speakers were to recite a passage from their local language and a set of sentences devised by the Bengal Asiatic Society, also in their own language.

All of this, of course, could not have been accomplished without some Brahminical drama. The scholar Ganganath Jha, who was approached for the Sanskrit reading, was scandalised to learn that a ‘mlechha’ would be privy to his chaste Sanskrit. A demand was made for a certifiably Brahmin gramophone operator. The Raj, almost as unbending as Brahmins, refused. A compromise was reached: Jha sat in a room and spoke into a large horn-like object that projected his voice into another room where the operator sat. Communication between the two was by means of a complicated system of switches to ensure that the operator didn’t physically hear the Sanskrit. And that was enough to assuage the Brahmin guilt about speaking Sanskrit into a device that held the power to broadcast it to the world.

The recordings contain some startling treasures. The most precious of these are the two clips by Mir Baqar Ali, a legendary Dastango of Delhi. Amin believes this is the only footage there is of Ali’s voice. Dastangoi is an art of narrating stories, going back to The Thousand and One Arabian Nights, in which stories are told through the night, and paused only when morning comes. Each gramophone record of the time, though, was only three-and-a-half minutes long. So the great Baqar Ali is cut comically short. Even so, it is a priceless find. “His recording is our only living source to an oral heritage that stretched back for centuries,” says Mahmood Farooqui, the author of Beseiged: Voices from Delhi 1857, co-director of the film Peepli [Live], and a Dastangoi exponent himself. “It gives us clues to the diction, tone, delivery, pitch and tonality of the Dastangoi formÉ Mir Baqar Ali was the last great Dastango of India… It is extremely, extremely valuable.”

Many of the speakers chose to sing or recite poems or limericks. Particularly lingering is the voice of Hassaina of Delhi who has clips in the Ahirwati and Mewati languages. Who was this girl who sang with such sang-froid of love and waiting on 26 April 1920?  Nothing is known of her. She survives only as a voice.

“The gramophone records are in some way the only critical documentation available on a lot of music that was generated in the early half of the 20th century,” says Vidya Shah, musician and director of the Ford Foundation-supported project, Women on Record. “There are no biographies, very few anecdotes and limited documentation of this time. These recordings happen to be the only record of their music.”

Grander plans are being made now. James Nye of the University of Chicago is teaming up with Professor Amin to digitise pretty much every commercially produced sound recorded on the gramophone in colonial India. But it will take 5-6 years at least, says Professor Amin.

It’s likely to be worth the wait. One of these days, if you get off unexpectedly early from work, listen to the LSI clips. Even if languages are not your thing, there are the songs. And most intriguing of all is the clipped British accent you hear introducing every speaker. It belongs to the gramophone operator, a man who criss-crossed the Subcontinent to put together these records. Yet, there is no record of his name or what he did on the voluminous textual analogue of the LSI. One day perhaps, someone will make a film on him, and put a face to him. Perhaps even a song in his honour.