So the scene for Indians is really bad in Australia. But surely there’s something these hapless desis can do to make life easier for themselves 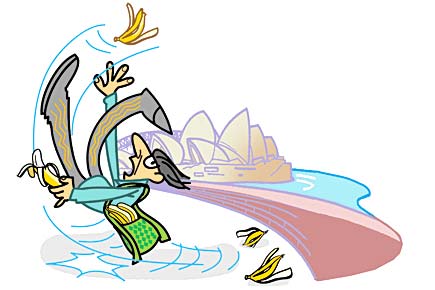 So the scene for Indians is really bad in Australia. Surely there’s something these desis can do to make life easier


Many years ago, when an African American classmate of mine was on a visit to India, he dropped by for lunch at my grandmother’s home. We sat around a long table with my grandmother at the head, and ate. Throughout the meal there was an uncomfortable silence. The idea of an African American man sitting as an equal at a table full of Indians who were themselves close to his skin colour should have been laughable. But my grandmother’s mere gaze made him feel unwanted. After he had departed, she commented, “The hubshi (black man) ate four rotis.” For a middle-class Indian household, the statement was not an uncommon one. African has no place in the Indian psyche. My grandmother felt no need to be politically correct, or to be restrained. She merely said what almost every Indian thinks when confronted with inner prejudices.

WHAT HAPPENS WHEN INDIANS ARE TARGETS OF RACISM?

In the current state of agitated paranoia that has gripped Indians living in Australia, it is hardly the time to make statements about ideals and the psychology of race. Certainly, the kind of violence currently on view in Melbourne against Indian students needs strict condemnation. But at the same time, you wonder why the targets for hate crimes are always almost Indian, and not the innumerable other minorities that make up urban Australia. Why indeed do Arab men in Melbourne 2009pick on Indians as well? Why are Indians singled out for mugging and murder in Texas and Louisiana over Chinese or African students? Why are Indian students in Russian universities picked over West Indians for lynching? Or why do Indian settlers face the wrath of other minority communities even in supposedly tolerant places like Malaysia, truly Asia?

The real problem in Australia perhaps has less to do with attitudes to skin colour or ethnicity, broadly speaking, or even the white man’s latent colonialism resurfacing each time the native enters white domain. The problem is the native.

It is an Indian thing.

Every time I visit the US or Europe, as I proceed to lower myself into the steady stream of people on a New York sidewalk, in a London tube, or at the city centre in Singapore, I become instantly guarded. It happens by instinct.

My actions and gestures are specific to my new setting, to a place with a prescribed manner of public life. I walk only on sidewalks. I cross at pedestrian crossings. I don’t urinate against walls, or shout across buildings. Or dry clothes on the road divider.

I am acutely aware of my rights, my space and the limits of my trespassings. I make myself ‘fit in’ because without it, I am not just an outsider, but a palpable threat to public order.

LIVING THE URBAN CODE: THE INDIAN IN A WESTERN CITY

Besides public restrictions, the Western—and Australian—city is also a platform of innumerable opportunities. There are places to eat, sidewalk cafes, bars that spill on to the street, parks, walkways, recreation centres, shopping plazas, libraries, running tracks; you are in constant collision in a culture of varied offerings.

The structure of all such activity is governed, however, by unwritten cultural codes—codes for public behaviour, rules of movement, dress, attitudes to space, privacy and intimacy. Of course, it is all done without the need to tell anyone how to behave in specific situations: to be silent in a library, or to wait your turn at a ticket counter. To shout at the horse track, not at Wimbledon.

By contrast, Indian urbanity is unaccustomed to subtle suggestion. The park opposite my home has an 18-point list of Dos and Don’ts at the entrance, among them: ‘No washing of clothes in park’, ‘No eatables allowed’, ‘No bathing’, ‘No entry for pets’. But at any given time of day, plastic wrappers litter the ground, while stray dogs sniff food leftovers. Men bathe, while local women wash clothes at the hand pump. Rich people walk their dogs even when the sign forbids them.

The need to institutionalise public behaviour and graphically display it on a board is the inevitable necessity of a culture that has little regard for public space, and scant interest in preserving anything outside the domestic domain. That public apace belongs to everyone is a strangely foreign notion; that it must be preserved and paid for is equally an un-Indian idea.

The chaotic agglomeration of the Indian city also ensures the urban Indian remains entirely dissociated from public life and the rules of collective behaviour. The absence of walkable space, parks, public libraries, places for meeting, street life or any activity of cooperative intent, makes the city merely an assortment of private houses and private institutions.

You move through life not as individuals with respect for other individuals, but as whole families, usurping family compounds, filling restaurants, occupying offices. A subspecies so self-centred, it is incapable of surviving outside the family, an urban pygmy, as it were.

Years ago, I remember, as an Indian student in an American city, the process of adaptation to the new place had been long and painful. Walking home to my dal-splattered apartment from a bar at night, it was natural to turn to a bush or wall to relieve myself. It mattered little that the wall was set in Philadelphia and not Delhi, or that the bush was part of a private compound.

Regardless of the consequences, Indian life continued. Two Indian students were expelled from the dormitory for cooking in their room and defying fire regulations. In the co-ed dorm, another was ejected for molesting a female student. Indians were regularly caught for breaking traffic rules on freeways, or refusing to pay parking fees. Since most such actions would be considered natural at home, we were genuinely perplexed at the fines and reprimands.

At the university’s Indian Students Association, it was possible to return to a state of utter nostalgia and homesickness. Every Saturday evening, in a grim basement, we gathered, melancholic and lost in the new surroundings, to recreate—for a short spell—what we had left behind in India. Someone brought a plate of vadas, another pakoras, a third the samosas.

After an old Bollywood movie was screened, everyone gathered to share the food and commiserate the new life. Some cried, not so much for the movie contents, but for the reminders of India on screen. We spoke about cricket.

So out of touch with local reality, so clearly lacking in social skills, the dank basement was the only real community for us. Meanwhile, African and other Asian students were at bars with their classmates.

The Australian authorities say they are still seeking credible evidence of racism before making arrests. Racism is too shaky and tentative a claim on which to book anyone.

Whatever action the authorities may take, Indians will probably remain misfits there. While students from Cameroon or those from nearby Indonesia adjust to their new setting, Australian multiculturalism must make the more difficult allowances for Indians, whose close-packing and alien ways make for some truly awkward cultural contrasts.

Of course, the prevalence of gurdwaras among church steeples, the bearded among the clean shaven, head scarved among skin heads, are all now ordinary sights in Western countries, but the juxtaposition still gives too mixed a message to local youth, who wear their discontent on their sleeves. Natural then that a mere spark at a local bar becomes a flame over the whole city.