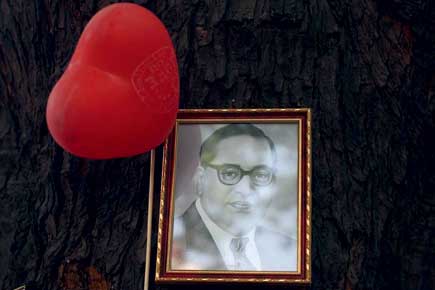 
BR Ambedkar died on 6 December 1956. A little less than two months before his death, on 14 October 1956, in a huge public ceremony in Nagpur, he was reborn a Buddhist, converting some 400,000 Dalits along with himself. The creed adopted by Ambedkar and his followers that day was called Navayana, or the New Way. It became the latest of the varieties of Buddhism to have arisen over the centuries in south and southeast Asia, principally the Mahayana, Hinayana, Vajrayana and Theravada. As the maker of this school of Buddhism, Ambedkar, who was already the leading representative of Untouchables, an architect of the country’s Constitution and one of the new republic’s most significant founders, also became a major religious leader of 20th century India.

Unfortunately, Ambedkar did not live long enough for us to see him assume this mantle and take on the responsibilities that went with it. His magnum opus, The Buddha and His Dhamma, a retelling of the Buddha’s teachings for modern readers, was completed by him just prior to his death and published posthumously in 1957. It is only now, 55 years after this book appeared in print, that its first critical edition has been prepared by two scholars, Aakash Singh Rathore and Ajay Verma. This work forces us to revisit the question of whether Ambedkar intended Navayana to be the culmination of his life-long quest for a genuinely empowering political identity for India’s Untouchables, or whether he meant this sect to provide a distinctive religion to its adherents.

The critical edition also pushes us to ask: has Ambedkar’s neo-Buddhism been taken seriously in the global Buddhist community? Has Ambedkar been accepted as a participant and innovator in the Buddhist tradition that goes back 2,500 years to the  Buddha himself? In India, does Ambedkar receive the attention and credit he deserves for trying to attack the worst problem plaguing Hinduism, that of extreme caste inequality, especially untouchability, from the vantage of a different—and yet familiar—religion? What was Ambedkar doing when he assertively and publicly embraced Buddhism, and are the meanings and intentions of his conversion still relevant in Indian social and political life half a century later?

The shocking violence, discrimination and oppression on display in Anand Patwardhan’s latest documentary film, Jai Bhim Comrade, certainly indicates that the decades since Ambedkar’s bold rejection of Hinduism and embrace of Buddhism have scarcely made a dent in dominant Indian attitudes to the caste system and particularly to those unlucky enough to be at the lower echelons of this intricate and pervasive hierarchy. Despite strong Left movements and active policies with regard to reservations and affirmative action, the Indian polity has managed to leave most of its upper caste and upper class citizens not just indifferent to structural inequality and endemic injustice, but in fact actively prejudiced against the lowest of the low: Dalits.

Patwardhan’s film—shot over 14 years and focused primarily on a group of Dalit poets and activists in and around Mumbai—also suggests that while both the organised Left as well as a broad spectrum of progressive politics have taken a beating since the onset of globalisation, the Hindu Right has become the natural home for every kind of reactionary tendency in Indian society. It would seem that Nehru’s secularism, Gandhi’s pacifism and Ambedkar’s egalitarianism have all lost their teeth in the brave new India of the 21st century. The battle of the future, when it comes, is going to be directly between Hindutva forces, wearing the frightening mask of Narendra Modi’s virulently communal politics, and a Dalit movement that will have to reinvent and re-equip itself with an urgency that cannot be gainsaid. Caste war and class war will converge, with the upper-caste middle-class Hindu majority pitted against the poor—Dalits, Muslims, Adivasis and other economically and socially disadvantaged minorities.

Over the course of his career, Ambedkar tried to address the problem of caste from all of the major points of departure available in his times. To begin with, he adopted the tactics of civil disobedience that were used very successfully by Mahatma Gandhi from about 1920 onwards. This constituted the first phase of Ambedkar’s politics, the so-called ‘tank and temple’ mobilisations. In the 1930s, he developed a more pragmatic—and markedly anti-Gandhian—understanding of how groups secure rights in an unequal playing field, and began thinking in terms of majorities and minorities, electorates and representation. Finally, in the mid-1940s, he assumed the helmsmanship of the Drafting Committee in the Constituent Assembly, which necessitated a cohesive perspective on the entirety of

the Indian social structure, and not just Dalits. It was only after the promulgation of the Constitution of India in January 1950 that Ambedkar turned his attention to the possibility and prospect of religious conversion for Dalits.

Ambedkar chose Buddhism and not any other major religion for a number of reasons. One was that the Buddha, in his view, was the first dissenter against the caste system in Indian history. So Buddhism had always been the religion of those who rejected caste; to turn to it now would only be to return to it after a centuries-long hiatus. His second rationale was that all the other principal options—Islam, Christianity and Sikhism—had to be ruled out (for complicated reasons that cannot be adequately addressed here). His third argument was that the gesture of converting to another faith would simultaneously be the gesture of leaving the Hindu fold—a very important step that Untouchables had to take in order to recover and restore their self-respect.

The difficulty in assessing the proper significance of the conversion arises because Ambedkar prefaces The Buddha and His Dhamma with, first, a disavowal of the Four Noble Truths, and second, a dismissal of the story of Siddhartha Gautama’s parivraja (renunciation). Both these announcements necessarily give us pause. Our common perception has it that Buddhism is premised on these four linked assertions: the truth of suffering, the truth of the cause of suffering, the truth of the path to Nirvana, and the truth of Nirvana. If you do not accept these premises, can you really be called a Buddhist? This is the first, and rather substantial, doubt.

The other hurdle is hardly easier to cross. Again, the story everyone hears and accepts is that Prince Siddhartha encountered, for the first time rather late in his life (close to age 30), the realities of sickness, ageing and death, and this shocking knowledge made him renounce his kingdom and family and go in search of Nirvana. If Ambedkar dismisses this core narrative of Buddhism, then how do we understand him as a believer?

Ambedkar’s editors, Rathore and Verma, tell us that when The Buddha and His Dhamma first appeared, it was critically received even within Buddhist circles for precisely these reasons. But contemporary scholars have now pointed out that Ambedkar has an eminent predecessor who similarly reduced the importance of the Four Noble Truths—and this was none other than the great 2nd century Buddhist philosopher Nagarjuna, the exponent of the Madhyamaka school.

As for the Buddha’s parivraja, Ambedkar’s scepticism is not about the Sakya prince’s renunciation, but rather, about his belated encounter with the hard facts of life and death. We may attribute this to Ambedkar’s rationalist stance and scientific temper, not just towards the Buddha but towards all subjects with which he was engaged as a modernist intellectual, and let it be. Here is what he wrote in his brief ‘Introduction’:

‘Why did the Buddha take Parivraja? The traditional answer is that he took Parivraja because he saw a dead person, a sick person, and an old person. This answer is absurd on the face of it. The Buddha took Parivraja at the age of twenty-nine. If he took Parivraja as a result of these three sights, how is it that he did not see these three sights earlier? These are common events occurring by the hundreds, and the Buddha could not have failed to come across them earlier. It is impossible to accept the traditional explanation that this was the first time he saw them. The explanation is not plausible and does not appeal to reason.’

In my view, what lies at the heart of Buddhism’s appeal for Ambedkar, and what makes Ambedkar convert to Buddhism over any other faith available to him and accessible to Dalits in the modern world, is the centrality, in this system, of the category of duhkha (suffering). Ambedkar sees duhkha not as a product of karma and rebirth (he is explicit about this); in other words, not as the individual’s burden to carry, but rather as a widespread problem of social suffering, which is a direct outcome of the socially prevalent evil of caste. There is suffering because there is inequality; there is inequality because there is caste; and this causal chain can perhaps only be broken by a religion that recognises simultaneously that: a) Suffering is the starting point of any ethical inquiry, any philosophical journey; and b) Inequality cannot be the basis of a good society.

But why a religion, as opposed to a political ideology or set of political tactics? The answer here has to be that between 1920 and 1950, Ambedkar serially tried other methods and found them wanting, and only then, at the end of a life-long quest, did he take the momentous step towards conversion. And surely he was right in his intuition about the inextricable relationship between social inequality and social suffering, caste and duhkha. Patwardhan’s wrenching documentation of Dalit lives torn by rape, arson, intimidation, poverty, corruption and sheer humiliation shows in no uncertain terms what this kind of duhkha, so depressingly characteristic of Indian society, can do to individuals, families, communities and ultimately an entire nation.

In the name of democracy, non-Dalit campaigners from various political parties can garland a statue of Dr Babasaheb Ambedkar in a Mumbai neighbourhood without any trace of guilt for an incident that took place right underneath that very same statue some years ago—the wanton killing of unarmed Dalit civilians who happened to be standing around one morning after a garland of shoes had mysteriously appeared on the statue. The garlands of flowers or shoes, the statue of a bespectacled Ambedkar clad in a suit and clasping the Constitution—these are the alphabets of a symbolic politics, the flip side of which is a bloody montage composed of the mutilated, dead and suffering bodies of Dalits who cannot escape a violence that is all too real. Even as we are jolted by the powerful songs that Dalit poet-activists sing, we cannot but be shamed by the realisation that India is immemorially and stubbornly unequal.

Two-and-a-half millennia ago, Siddhartha Gautama was launched on his search for an end to suffering by the seemingly mundane truths of the human condition. Surely, Babasaheb Ambedkar’s encounters with catastrophic forms of modern suffering had to propel him towards yet another quest with epoch-making dimensions.