This author lost his boyhood to science fiction. It was a bit like Dante’s hell: abandon ye all hope, those who enter here 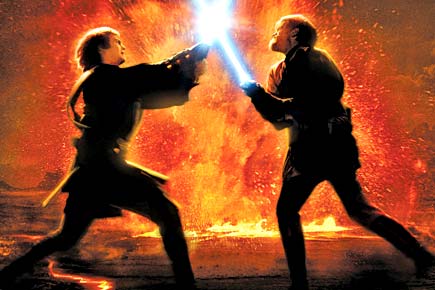 I lost my boyhood to science fiction. It was a bit like Dante’s hell: abandon ye all hope, those who enter here


I was born in the UK, through no fault of my own, and one of my earliest memories, apart from the horrible food and the miserable weather, was of watching Dr Who from behind the sofa. Extensive research has shown that generations of British kids have been psychologically damaged by watching Dr Who while hiding behind the sofa, and it is well known that the decline in British society, economy and culture started around the early 1950s—the same time they started showing Dr Who on a regular basis. This is no coincidence.

It’s hard to explain how this TV programme, no doubt created with the best of intentions, has ended up horrifying so many innocent children. The production values are tacky, and the doctor seems amiable enough. Maybe it was the Daleks, who were vaguely conical robotic creatures with metallic voices and a limited vocabulary. They mostly trundled around slowly and repeated the word ‘ex-ter-minate’ at regular intervals. A one-legged granny on crutches could easily have outrun them at any time, but no one ever did. Instead, they hung around obligingly until they were exterminated. The programme ran for decades, with a brief hiatus when Mrs Thatcher came to power, triggering an economic renaissance. Unfortunately, when Tony Blair took charge, the good folks at the BBC sneaked the Doctor back in, and today the pound has almost the same value as whatever currency they use in Bangladesh. You can see a pattern here.

By the time Blair was ill-advisedly resurrecting Dr Who, I had moved on to Philip K Dick, who was messing up my head in a whole new set of ways. But I’m getting ahead of the story. At the age of 10, I was suddenly transplanted from Yorkshire to Calcutta. Idi Amin was being mean to British Asians in Uganda, with little or no objection from the British government, and my dad figured that maybe a UK passport wasn’t such a hot idea after all.

For me, Calcutta was like being teleported to a different planet, so I could now relate to many of the stories I read in a deeply personal way. Plus, there was no television (this was the early 1970s). The agony was intense. I had no option. I had to read. I had to fill the void created by the sudden disappearance of Scooby Doo, the Flintstones and various puppets with squeaky voices. I had to escape the hell my life had become. The further the better, and that’s where science fiction came in handy.

There’s no better form of fiction for anyone with a taste for travel. I started my journey with Dr Asimov, switching doctors, so to speak, and my health improved remarkably. Today, he’s somewhat unfashionable, because, like Enid Blyton or Agatha Christie, he’s become almost synonymous with the form. But he was brilliant, and created many of the basic plotlines and conventions that define science fiction. His robot stories inspired many of the pioneers of robotics, and the Japanese named the first commercially produced robot, Asimo, in his honour, thereby proving that the Japanese cannot pronounce the letter ‘v’. Or maybe they just don’t like Russians.

The next time you see a bright-eyed 12-year-old who’s wondering what to do next, hand him a copy of I, Robot or Foundation. You might convert a potential psychopath into a potential scientist, which is never a bad thing.

Once he seems like less of a menace to society, you could also introduce him to Arthur C Clarke, who, apart from writing science fiction, invented the concept of geosynchronous satellites on a rainy afternoon. If, somewhat paradoxically, you like your flights of fancy to be grounded in scientific probability, then he’s the man for you. Stanley Kubrick was deeply impressed and made 2001 : A Space Odyssey, a classic that you must only watch when sober.

By this time, I had acquired a taste for travel, and I discovered some pretty good tour guides. Robert Heinlein took me through dizzyingly interlinked alternate realities, and showed me the seamy side of military action in outer space with Starship Troopers. He was surprisingly Right wing, except when it came to sex, which he was fully in favour of. Since his books usually had spaceships on the cover, my mother could never figure out what I was actually reading, which was a major plus.

And then, in 1977, Star Wars happened. It’s hard to explain the full impact of Star Wars to all you normal  people. Spaceships! Robots! Giant furry creatures that talked! The coolest villain in the universe! Princess Leia in a gold bikini! (Okay, that came later.) Suddenly, you didn’t have to imagine it any more. It was all there, all on the screen, all happening right in front of our eyes. I only managed to see it seven or eight times, funds being limited, but I spent weeks walking around in a daze. Bobby had a similar effect on most of my classmates, including one who used to see it every day, and quite literally wasted away in front of our eyes. He’s walked with a slight stoop ever since.

Of course, I’m not a fanatic like so many other geeky losers, and don’t want to get carried away, so I’ll just end this bit by telling you that George Lucas is, to all intents and purposes, God. And if you don’t agree, I’m afraid I’ll have to come over to your house and beat you to death with my plastic light saber, which everyone thinks I bought for my son.

Once again, in my excitement, I have moved ahead of the story. Or perhaps it’s just that I’m so used to time travel. But it’s fair to say that science fiction fans are chronologically very similar to Christians—here’s BSW (Before Star Wars) and ASW (After Star Wars). For example, in the years 1-2 ASW, I can remember doing very little else except waiting for the release of The Empire Strikes Back.

Okay, that’s not true, strictly speaking. I was still reading too, since this was before VCRs had become popular, so I couldn’t spend all my time watching Star Wars.

By this time, I was into Philip K Dick, most of whose books should come with a health warning. In a strange, twisted field full of strange, twisted people, Dick was undoubtedly the strangest and most twisted of them all. He took me to worlds where time moved backwards, which is pretty handy if you’re suffering from a hangover. Worlds where androids dreamed of electric sheep, which they turned into Blade Runner. Worlds where you took holidays by pretending they had happened, which became Total Recall. Worlds where criminals were arrested before they committed the crime (Minority Report). There were even worlds where 50 per cent of the population were drug addicts, who were kept in line by the other 50 per cent, who were mostly police, and where the hero, being schizophrenic, ended up spying on himself. You can achieve something similar with a Sony Handycam and a bottle of vodka. I’ve tried it. It works.

The funny thing is, for a man who inspired so many big ticket Hollywood movies, he spent most of his life starving. At one point, he was so poor, he and his wife were reduced to buying dog food, until one day the woman at the pet shop looked him in the eye and said, “You don’t really have a dog, do you?”, which Dick remembered as the scariest moment of his entire life. Luckily, soon after, Robert Heinlein gave him shelter in his garden shed and fed him three square meals a day, despite being at the opposite end of the spectrum politically. George Bush would still have been flunking junior school around the same time, so it was a kinder, gentler America.

It’s fair to say Dick messed up my head completely, and blurred the lines between perception and reality so thoroughly that I have a hard time keeping track. But people can’t see inside my head, so it’s mostly okay.

Poverty is a recurring theme or motif in science fiction. Most authors never made a buck, and neither did most of us readers. I guess that’s why we all needed to escape so much. Or perhaps that’s what led to it. SF writers were also poor because they got paid by the word, a system which most publishers these days recall sadly as they weep into their beers. This had one great side effect. If those guys had to eat, they had to write. So they wrote a lot. Your typical SF author could grunt out a short story between trips to the bathroom, and a 200-page novel in the time his wife took to recover from the flu. So there’s no lack of reading material. Which is great. I mean, let’s face it, we all love JD Salinger, but do we really have enough of him? No one takes you seriously in SF until you’ve written at least a hundred books. Asimov, God bless him, wrote over 200, including entire encyclopaedias. (Check out Asimov’s Guide to Shakespeare, which is large enough to be a murder weapon, and where he wrote copious notes on every play Shakespeare ever wrote. If my daughter passes Class XII English, it’ll be thanks to him. And coffee.)

Having been sucked into SF during my misspent youth, I’ve never had to leave. There’s just endless stuff to read. And watch as well, thanks to George, and his buddy Steven, whom some of us dislike for never mentioning Conan Doyle even once in any of the Jurassic Park movies. But then again, I remember my daughter, age three, gobbling popcorn and laughing hysterically as a T Rex messily devoured a man sitting on a potty in the pouring rain. As I looked at her face, it was like coming home.

Chowdhury has spent most of his life in advertising and marketing, apart from doing odd jobs for Aaj Tak and NCAER. He is currently working on his first novel, doesn’t have a publisher, and his number is 9810132218