Hindi cinema’s biggest blockbuster officially completes 35 years this 15 August, but it was actually born in 1973 in a small room. Screenplay writer Salim Khan remembers how Sholay was conceived. 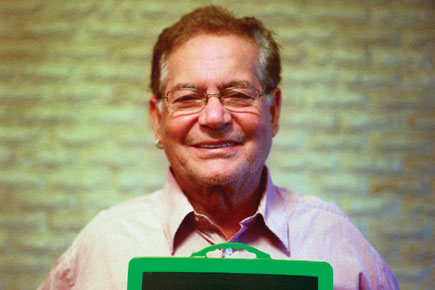 Screenplay writer Salim Khan remembers the making of Sholay, and getting short-changed for Amitabh Bachchan’s fame.


When Javed [Akhtar] and I wrote Ramesh Sippy’s Andaaz and Seeta Aur Geeta, we weren’t partners. We worked on it as part of the Sippy story department’s team and received a salary of Rs 750. We had to fight for credit, and when we didn’t get it for Seeta Aur Geeta, we left the Sippys. Writers had no izzat (respect) those days. I still remember how posters of Zanjeer didn’t have our names. So we hired a man with a jeep and got him to paint Salim-Javed in stencil font on all theZanjeer posters from Juhu to Opera House. The man probably was a few drinks down, so he painted Salim-Javed on Pran’s face or Amitabh’s [Bachchan] hands!

After six months, we again got in touch with GP Sippy and [son] Ramesh, but now as the writing team of Salim-Javed. We had two narrations for them. One was the four-line idea of Sholay and the other the complete script of Majboor. GP Sippysaab wanted to make a film with a large canvas. When he heard Majboor, he said, “Filmchalegi (it will work), but there’s no sense in making this in 70 mm and with stereophonic sound.”

We said, “If that’s what you have in mind, listen to Sholay.” Most of Sholay was inspired by Magnificent Seven and also Dirty Dozen, The Five Man Army, Once Upon A Time In The West—a lot of Westerns. Ramesh was more attracted by the fact that Majboor was a complete script with dialogues. But Sippysaab said no. AfterAndaaz and Seeta Aur Geeta, the company was doing well; he wanted to take that risk. We demanded credit and Ramesh agreed. We then sold Majboor’s script to Premji; it was our first script that sold for Rs 2 lakh and Ravi Tandon went on to direct that movie. For Sholay, we were paid Rs 1.5 lakh.

It took us a month to write Sholay in a small room laid with white mattresses that served as the Sippy story-writing room at their Khar office. The dialogues then took us about one-and-a-half months. Javed and I worked at it, while Ramesh Sippy, Satish Bhatnagar and Narendra Bedi pitched in. Once we were done, we all felt we had a blockbuster. In Hollywood, a script is called a ‘property’. In Sholay’s case, we felt we had a huge ‘property’. We now had to have a great cast.

A good screenplay writer always visualises the movie, so we always had people in mind for the characters. For Thakur Baldev Singh’s role, I approached Dilip Kumar. I had also narrated Zanjeer to Dilipsaab in Bandra Gymkhana, but he had turned that down too. Dilipsaab felt the Sholay role had limitations. He wanted to perform comedy and emotion, and he felt this was a straitjacketed role. I met Dilipsaab about eight days ago. When we were chatting, I asked him, “Which films do you wish you had not let go of?” He replied, “Baiju Bawra, Pyaasa, Zanjeer and Sholay.”

When we approached Sanjeev Kumar, he wanted to do Gabbar’s role. He tried to convince us by messing up his hair, staining his teeth and doing some mannerisms. But we felt he had the audience’s sympathy through roles he’d done before; Gabbar had to be completely hateful. We were in search of a newcomer for Gabbar. We had Prem Nathji in mind, but he had a reputation for being difficult. One day, when I was walking along Bandra Bandstand, I bumped into Amjad Khan. I had acted with his father Jayant in a film, so I knew Amjad, who had done the part of a black slave in K Asif’s Love and God. I told him I’d suggest his name; if he got chosen, his career would be set. Amjad did his screen test and was selected because Danny Denzongpa (the other choice) didn’t get back to the Sippys in time.

Sholay was a title I suggested right at the start, but we also toyed with Angaarey. The names of Sholay’s characters came from real life. I had two college friends in Indore, Veeru and Jai. Veerandar Singh Bias was the son of a jagirdar at Khajrana Kothi—he died just six months ago. Jai Singh Rao Kalevar died four years ago. He had worked in a company in Mumbai, then grew vegetables at a farm in Thane. They were my drinking buddies. Jai used to grumble that I never gave him royalty, but inside, he was pleased. Thakur Baldev Singh’s name came from my father-in-law [Salma’s father], who was probably Mumbai’s oldest practising dentist at 80 years. He was very happy I’d made him famous the world over with Sholay.

The strangest dialogues in Sholay became popular—it was so unfair (laughs). ‘Arre O Sambha! Kitne aadmi thhe?’ ‘Poore pachaas hazaar’… these were not really dialogues. I particularly liked the speech that Thakur gives when he finds out his family is dead. It’s also well-known today that the scene where Jai speaks about Veeru to Basanti’s mother was taken from the real-life incident where I recommended Javed to Honey Irani’s mother.

Once the shoot started, Javed and I visited the sets to make changes; there weren’t many, though. I suppose the most challenging parts were the action sequences, wonderfully created by foreign technicians Jim (Allen) and Gerry (Crampton). Dwarka Divecha captured it all brilliantly. After he died, there was a vacuum in that department. Ramesh Sippy put together such a team. Sholay became a cult film because all of us were so excited and at the peak of our careers.

When Sholay released, for four weeks, the trade papers went on about how it was a flop. Yet, we were confident. As Salim-Javed, we took out a personal, full-page advertisement in trade papers saying Sholay would do business of Rs 1 crore per territory. Of course, we were mistaken. It did business of much more. It didn’t work at first because the first show was at 9:30 am and the last at 2 am—the timings were odd. Once that changed, it ran for five years in Minerva.

After Sholay, we were in great demand as writers. Everyone came to us and we increased our price until we were paid more than even actresses. Salim-Javed was the first choice and they thought our success was fool-proof. Yet, Sholay can never be attempted again. I’ve seen so many spoofs, caricatures and even suffered through Ram Gopal Varma Ki Aag (laughs). Yet, I have nothing against interpretations; we ourselves took inspiration from Hollywood films.

I had a personal relationship with most of those who worked on Sholay, like Sanjeev Kumar and Amjad Khan. I still occasionally talk with Dharmendra. But I have no relationship with Amitabh Bachchan. He goes about crediting Dharmendra for having recommended him to the Sippys when even Dharmendra has denied that. The truth is that I kept a trial of Zanjeer for the Sippy family so they could see what Amitabh was made of. I introduced him to Prakash Mehra and Manmohan Desai. The ‘Angry Young Man’ was my discovery—my father was a policeman for 32 years and the character was created from material I got from that. You should give credit where it is due. I’m willing to sit down and sort it out with Amitabh, but he doesn’t even see the problem, so I have no desire to keep in touch.

I don’t live in the past glory of Sholay or Deewar. I may have played marbles or sat on a tree as a child, but if you still see me sitting on a tree, you’d say, “Salim Khan paagal ho gaye (has gone mad).” I wouldn’t change a thing of Sholay, just like you wouldn’t tamper with a winning side in cricket.

As told to Shradha Sukumaran