Move beyond vegetarian and non-vegetarian food. Start thinking of ethical and unethical food. 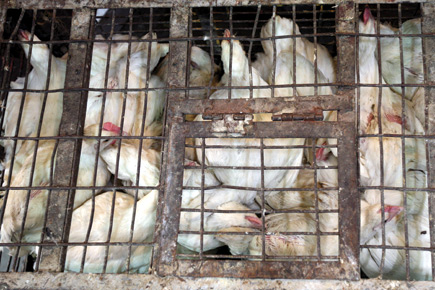 Move beyond vegetarian and non-vegetarian food. Start thinking of ethical and unethical food.


Whether pigs can fly still remains debatable, but the fact that they are quite smart has some anecdotal and scientific basis. One such intrepid (and needy) female pig, as observed by the British naturalist Gilbert White in 1789, used to unlatch the gate to her pen, ‘march to a distant farm’ for a tryst with a male pig, and when ‘her purpose was served’ returned home ‘by the same means’.  Amongst the several anecdotes quoted in Jonathan Safran Foer’s book Eating Animals, published last year, the resolute pig illustrates one of the many prickly ethical issues he discusses—how we perceive animals.

It is convenient for us, he argues, to regard animals as lesser beings, choose some as companions worthy of affection and love, slaughter others for food (in the most cruel ways possible), and view their suffering as less than ours. There have been ethical bypasses, the author informs us, stories we have told ourselves to deal with our guilt; namely, ‘consent myths’ which have existed from antiquity. So in exchange for our domestication, animals have mythically ‘consented’ to their eggs and milk being harvested and then being slaughtered at some point. We may affectionately anthropomorphise animals in cutesy entertainment such as Babe and Chicken Run, but the end of the line is the ‘kill floor’ of a large factory farm, several of which the author visits during his three-year research and describes vividly.

Setting out to re-examine his choices in the light of his recent fatherhood, the book is Safran Foer’s personal journey, fact-ridden and persuasive in bits, overwrought and anxious in others. The global meat industry over-produces stuff not to feed the hungry, but to make more money. And we, the consumers, prefer not to know what they do and how they do it, as long as supermarkets stock food in abundance and we can consume at will with total disregard to our own health and the collective well being of our planet.

In contrast, Tristram Stuart’s Waste: Uncovering the Global Food Scandal, does not make a case for vegetarianism. It instead points to how omnivores have moved away from eating offal, preferring the muscular tissue that supermarkets aggressively stock and promote (but he does delight in street takatak in Karachi; our own bheja, gurda-kapoora, jabaan are not too far away). This, Stuart argues, is waste: edible food irrationally discarded. Part personal narrative, part frontline investigation, Waste introduces the author as a precocious teenage pig-rearer, an insatiable urban hunter-gatherer, foraging and scavenging food from supermarket wastebins, and a passionate critic of profligacy. The book reveals to us ethical implications of waste along the supply chain of food—from harvesting to manufacturing to discarding surplus food at homes.

In the very introduction, Stuart states that modern agriculture is now ‘threatening the very life it was designed to support’ through overfishing, pollution caused by landfills, excessive and irrational surpluses in the Western world, depletion of natural forests, loss of plant and animal species, climate change, greenhouse gases and changes in hydrological cycles and soil. Startling facts are revealed in this intensively researched book—90 per cent of all predatory fish (cod, salmon, tuna) are already lost, just 4 per cent of oceans remain pristine, deforestation accounts for 75 per cent of emissions in Brazil, 58 per cent of carrots in UK farms are outgraded (and therefore discarded), 40 per cent of the world’s cereals are fed to farm animals, 35–40 per cent of fruits and vegetables in India go waste, and two-thirds of Americans are overweight.

The author aptly points out that food is a global commodity, many products are traded globally, nations are linked inextricably and ‘virtually no one is free from… western profligacy’. Hunger in parts of the world is linked directly to excess in the West, he says, while asserting that it is no longer ‘morally tenable’ for rich nations to deplete resources, harm the environment, and deprive others of food. Several other issues are tackled here—grains diverted for biofuel production, the logic of use-by/sell-by dates, landfill issues, legislation, agricultural land-leasing by rich nations, logic of surplus… Food shortages have caused revolutions, the author reminds us—from France of 1789 to Haiti in 2008. An indictment of Western ways, we are reminded of the growing demand for processed food in India and China, the increase in meat consumption, and how despite our traditional frugal ways the lack of infrastructure results in wastage, exemplified by startling losses of grain due to poor storage, lack of adequate transportation facilities, and inefficient public distribution systems.

Michael Pollan’s Food Rules, following up on his critically acclaimed An Omnivore’s Dilemma, is a slim, practical guide to healthy, conscionable eating. It is also a myth buster, revealing simple facts and clearing the air about others held to be facts. Divided into three sections, the author urges us in each to ‘eat food’, eat ‘mostly plants’ and eat ‘not too much’. Given the profusion of nutritional advice in the mass media, diets, supplements, ‘health foods’, and terms such as omega 3 fatty acids, antioxidants, saturated fat and gluten being bandied about freely, Pollan sets out to simplify matters, primarily for himself, and consequently, in the form of this book, for readers. He asserts two ‘indisputable facts’ at the outset—populations eating predominantly Western diets (high levels of fat and sugar, lots of processed meat, refined grains) are prone to a wide range of diseases, whereas those who predominantly live on traditional diets generally do not suffer these chronic diseases.

The author offers us 64 pithy rules in the quest for healthy and ‘ethical’ food choices. Number 1 is the elementary ‘Eat Food’, given that a lot of manufactured food-like stuff or processed food is hardly ‘food’ at all. No 11, intuitive knowledge which we often choose to ignore: ‘Avoid food you see advertised on television’. Number 23 is ‘Treat meat like a flavouring or special occasion food’, and number 49 is ‘Eat slowly’.

From Gandhi, the philosopher Peter Singer to writer JM Coetzee, many have spoken and written about food and ethics, for there are profound implications to how we produce, consume, trade and imagine food. Food ethics are complex, to say the least, and are connected to personal narratives, social and cultural histories and economic progress. But the notion that modern industrial food production is inhumane, unhealthy and ultimately untenable is gaining greater credence. Given the Western experience (where national nutritional policies have been influenced by the food industry), how do we, as a nation, safeguard ourselves whilst still pursuing economic prosperity? Can we? Or do we too wish for supermarkets of ‘infinite abundance’?