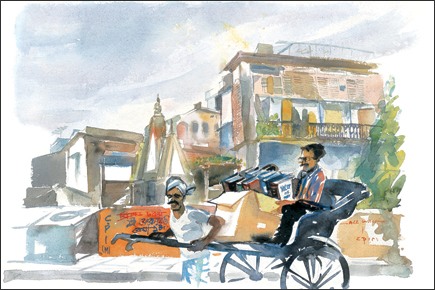 Novelist Amit Chaudhuri points out Calcutta’s elusive connection with its literary tradition and the anarchy caused by the Hungry Generation.

Probably fed up, Utpalda took a ‘job voucher’ from the British Deputy High Commission and applied for a job — it was possible, then, to travel to and work in Britain without a work permit or a visa. Fortuitously, and to his surprise, he got an offer in a week: Britain must have been as short of teachers then as it almost always has been. At this point, there is an urgent call on my mobile. I am not immediately aware of the urgency: “Yes, yes, I am in Utpal Basu’s house—Utpal Basu, the poet.” The caller is flummoxed; it seems I have an important appointment elsewhere; indeed, an awards ceremony, in which I, with three others, will be felicitated. Embarrassingly, it had completely slipped my mind. I rush out to look for a taxi. The conversation is incomplete. I have forgotten to ask Utpalda about Calcutta’s literary history.
Amit Chaudhuri is a novelist and has edited the anthology Memory’s Gold: Writings on Calcutta

Amit Chaudhuri
Amit Chaudhuri is an author and musician. His most recent book is Finding the Raga: An Improvisation on Indian Music