There are few quite like the merry men of Communist Kerala. From a group’s 27-year crusade for senior citizens’ right to subsidised alcohol to others who shoot off indignant SMSes if a liquor shop delays opening its shutters by even five minutes, Soutik Biswas records the desperation of the Malayali alcoholic. 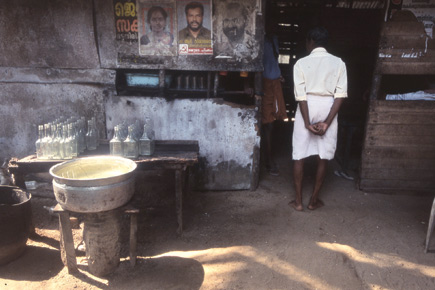 There are few quite like the merry men of Communist Kerala.


“If you have will power and enough food,” says NL Balakrishnan, sitting in a near-empty restaurant in downtown Thiruvananthapuram, “booze will never kill you.” He is a big, burly man with cheerfully bloodshot eyes. He also knows what he is talking about. On a day out with his drinking buddies in his prime, he would easily down 22 shots of his favourite brandy—and “never had any problems”. These days, it is down to ten shots a day, and brandy with pork “once in three months”. He is 67.

A well-known veteran actor of more than 200 films, Balakrishnan is the brain behind a group called Forum for Better Spirits. For the last 27 years, it has been pushing the government to provide liquor through the state-subsidised Public Distribution System, boost toddy production, slash prices for elderly drinkers and supply free alcohol to drinkers over 90. The group has about 150 dedicated members, up five times since it was launched. “Five or six of the original members have passed on,” says Balakrishnan. “They died of cirrhosis of the liver.”

When the founders sat down for their first meeting in 1983, one of them recommended the name Boozers Association. “A cameraman called Venu, who was recording the event, suggested it be called Forum for Better Spirits,” says Balakrishnan wanly. “The name stuck.” The last time he and his merry men visited a Communist minister with their list of demands, she tore it up and threw it back in his face. “But we soldier on and we have made a point,” he says. “No government can impose prohibition in Kerala today. People love drinking.”

Balakrishnan is right. Kerala is India’s Tippler Central. It has the highest per capita consumption (over eight litres per person a year), overtaking traditionally hard-drinking states like Punjab and Haryana. Brandy outsells whisky and rum here. Alcohol oils the state’s economy—more than 40 per cent of Kerala’s revenues for its annual budget come from booze.

There is no booze available this early in the restaurant and Balakrishnan is toying with a glass of lime soda. He says he has been Bacchus’ devotee for as long as he can remember. “My father initiated me into drinking when I was only four,” he says. “We used to go to the cinema together like the scene in Satyajit Ray’s Apu films. My father would carry me on his shoulders. After the show was over, he would take me to a toddy shop where he would drink. He would give me a few spoons of toddy to drink. We would both return home a bit tipsy.”

When Balakrishnan senior died at the age of 98, “after a lifetime of heavy drinking”, his son took out a bottle of arrack and poured a little bit on the lips of his dead father. “He had told me, ‘Don’t put holy water on my lips when I die. Moisten my lips with arrack’.” Like a good son, he followed his father’s last wishes. “Drinking is good,” says the son, a jolly and convivial crusader of free spirits. “Treat your drink properly and enjoy it.”

People in Kerala appear to agree with him. Across town, in a busy lane in the nondescript and gloomy offices of the Kerala State Beverages Corporation, N Shanker Reddy is possibly one of the busiest men in town. A former policeman, he heads the thriving state-run monopoly which runs over 330 liquor shops, open seven days a week, across the state. Each shop caters to, on an average, an astonishing 80,000 clients. This fiscal, the monopoly expects to sell over a billion dollars worth of alcohol in a state of 30 million people. That’s up from the $12 million when the monopoly took over the retail business in 1984.

Sitting in his clean and efficient-looking office with an anteroom full of oily, happy-looking employees, Reddy reels off numbers like the chief executive of a private corporation— 32 new shops in the last four years; each shop sells nearly Rs 300,000 worth of liquor daily; every customer can buy up to 3 litres of alcohol and one case of beer per purchase; there are also 600 ‘private bars’ and over 5,000 toddy shops. The teetotaller Mr Reddy is running a fluent operation.

The monopoly is also the most customer-friendly company in a state notorious for a slack work culture. It runs a busy hotline for customers. “Our customers are very aware,” says Reddy. “If we delay opening a shop by even five minutes, they send us text messages saying they are waiting. They also get worked up that the beer we stock is not properly chilled sometimes.” Alcohol is serious business: the queues at the retail shops are also the most disciplined in the state.

The monopoly also takes its corporate ‘social responsibility’ role seriously. It is planning to invest Rs 41 crore to set up a hospital specialising in treating alcohol-related diseases on a 70-acre plot of land in Tiruvallur. Mr Reddy says it has also hired magicians to “combat alcohol abuse and educate people”. It is a surreal move, but Mr Reddy is a pragmatic officer. “Driving liquor out of the state will drive the business underground to illicit liquor,” he says. So the motto is keep the booze legit. It buys and sells most of the liquor and also makes its own—one factory making rum and brandy, and another ‘cheap liquor’. The masses are never ignored in Kerala.

Balakrishnan invites me to a session with his buddies if I am in town for long. “I still prefer toddy to good Scotch because it is straight from the coconut tree,” he says, guffawing loudly. On the night trains out of town, the bacchanalia is infectious, as strangers bond over alcohol poured in wobbly plastic glasses, while their anxious wives keep calling till late in the night, keeping tabs on the number of pegs consumed. As the trains rattle into the night, they argue over Communism, tourism and much else. “A friend tells me that a road in Malappuram is lined with shiny new liver disease clinics,” announces a happily sozzled government officer on one journey. “We must all go and have a look, ha!” His drowsy friends nod in approval.

Back at my hotel, a 40-year-old government health inspector drops in to tell me how alcohol is taking a toll on Kerala. He says he lost a job, cut his wrists twice, went into rehab, and, at the age of 32, was reduced to begging to fund his alcohol habit. “Drinking is a disease in Kerala,” he whispers. I meet anti-alcohol NGOs who complain that the drink is to blame for rising divorces, road deaths, liver diseases, productivity dips and much else.

They tell me about how there was partial prohibition in Kerala till 1967. About how Kerala and 13 other states signed up to the Morarji Desai government’s All India Prohibition Council in 1977. Desai promised prohibition across India in four years. His government didn’t last that long. “Alcohol is a cultural problem in Kerala. The human cost is huge,” Johnson J Edayaranmula, who runs the Alcohol and Drug Information Centre, says.

Balakrishnan, contemplating a second lime soda, dismisses such fears. “If you have will power, you can control your drinking,” he says, tweaking his original thesis. “Look, I have 12 to 14 bottles of good liquor, even Scotch whisky, in my home bar. If I was desperate, I would drink all of it in a day. But I preserve them. Drink surely but slowly I say.”

Soutik Biswas is the India Editor for BBC News’ international news site, and a Reuters Fellow from the University of Oxford