The symbols of Christmas remain more or less unchanged over the centuries, although their ancient meanings have been lost 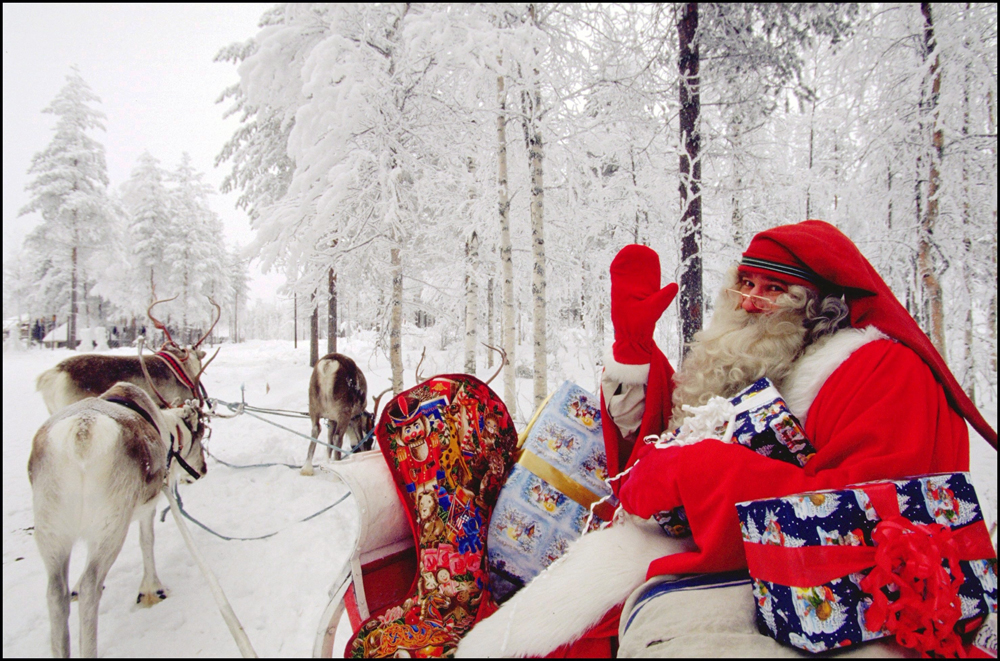 One sunny Sunday morning in Kolkata, I woke up not to a Bollywood tune or to Hindu devotional music but to a chorus of children’s voices singing Adeste Fideles. In Latin. It sounded like my attempts in the shower at singing Hindi film songs of which I understand only a quarter of the words. It was then that I realised Christmas was less than a month away and that in the home of Kali, it was celebrated with gusto. A few days later, the first Santa Clauses appeared in the stalls of Lake Market: plastic Santas, electric Santas, Santas who sang unlikely Christmas carols and the whole repertoire of Bing Crosby. It was a fascinating vision, framed as it was between boxes of Assam tea, heaps of spices, and vendors of snacks and sweets. Even stranger were the Christmas trees that started to pop up–all kinds including mango and banana since finding a fir in Calcutta would be a tall order. Snow, a mythical abstraction most people knew only from films, covered everything in the form of wadding. Old patisseries such as Fleury and Nohum sold pudding. On Park Street and in parts of town that were once known as the ‘white city’, inhabited mainly by the British, Christmas was marked by concerts, markets and roast turkey dinners at exclusive clubs.

Amid the festivities, allow me to note that Santa Claus and trees have very little or nothing to do with Christmas, which is, originally, a religious festival celebrating the birth of Jesus in Bethlehem. His parents, Joseph and Mary, were travelling. When they arrived in Bethlehem and could not find a room, they took shelter in a stable. The baby was born there and put into a manger; an ox and a donkey kept him warm with their breath. The Star of Bethlehem, possibly a comet, hovered over Bethlehem for a while, as if to witness the birth, and inspired three Wise Men from the east to go in search for the child of prophesy who would become king of the world. This is the story every Italian child grows up hearing. Most recreate it, thanks to Saint Frances of Assisi, who started to commemorate the birth of Jesus by staging the scene of Nativity in the year 1224.

An Italian writer, Luciano de Crescenzo, wrote a book called Thus Spoke Bellavista, which was later made into a successful film. Bellavista, a professor of philosophy in Naples, divides humans into two types: men of freedom and men of love, depending on whether they prefer to live embracing one another or to live alone, with all the freedom to do as they please. Men of love, such as the Neapolitans, do not need space. They would always live with one another. Men of freedom, like the Milanese, would prefer to be left in peace. This distinction, according to Bellavista, can be applied to Christmas as well: a man of freedom prefers the Christmas tree while the crib appeals to the man of love.

My father, like many south Italians, was a man of love. In my parents’ home, we had a Christmas tree for which my mother and I shared responsibility. My father did not want to have anything to do with it. As was tradition, we started preparations for the Nativity on the eighth of December. I still remember that year–I must have been five–when we painted and then crushed huge brown papersheets to make the mountains. I still have those papers, which are now worn thin.

Christmas season also meant excursions to the countryside to hunt for musk and pieces of wood. The skeleton of the scene was made using spare wooden fruit boxes. Then we would place the paper and upon it the fairy lights. Every house had to have a little hole when the light would be placed. Red fairy lights stood for fire and blue for water. We created villages and fields with sheep, rivers where women were doing laundry, and people visiting the stable where Jesus was born, bearing gifts for the baby and his family. As the tradition was started by Saint Francis of Assisi, our cribs don’t depict the scenery and the people of Bethlehem or snow and barnyard animals and people in western clothes.

The crib is elevated to an art in Naples, where traditional artisans work year-round in the magical market of San Gregorio Armeno to craft everything you could possibly want for your crib–from cork and cardboard houses of various sizes to mechanical objects like windmills and waterfalls, and from hand-painted terracotta shepherds to characters dressed in embroidered made-to-measure clothing. If you are in Naples during Christmas, it is worth visiting the ancient cribs, some of them dating back to the seventeenth century.

The Neapolitan crib is the perfect union of the sacred and the profane. So expect to find not only the Holy Family, the ox, the donkey and the three Magi but innumerable commoners including shepherds, sellers of fruit, butchers, pizza bakers, fishmongers and whores, besides caricatures of famous people like Diego Maradona, Silvio Berlusconi, George W Bush and once, Osama bin Laden. Becoming a character in a Neapolitan crib has become a goal for people in show business, politics and sport. This year, I suspect, will be the year of Donald Trump and Boris Johnson.

An authentic South Italian crib is incomplete without two sets of Wise Men: one is with the men travelling on camels, usually small in size so they can be placed on the mountains; the other  set kneel in front of the baby bearing gifts. This second set replaces the first on January 6. The baby is placed in the manger only on the night of December 24. When I was a child, the baby would bring us little gifts. The bigger gifts came later, on January 6, and it wasn’t Santa but an ugly old woman on a flying broom who brought them. We call her Befana. Befana comes to the Christmas market held at Piazza Navona in Rome on January 6. Santa Claus, to go back from where I started, has nothing to do with us.

The day we celebrate Christmas incorporates, beside the Christian tradition linked to the birth of Jesus, the winter solstice, which falls on December 21. It is the shortest day of the year, the day that marks the end of the predominance of darkness and the return of light to the earth. Jesus’ birthday is not reported by the Gospels, and the Church did not celebrate it at first. It was only with time that Christians began to celebrate the birth of Christ, and fixed it on January 6. The custom, born in Egypt, slowly spread to the West. Then, in the 4th century, the Church officially decided to celebrate the birth of Jesus on the 25th of December. Why? Many centuries ago, in Egypt, Syria and ancient Persia, the birth of another divine child was celebrated on the 25th of December: Mitra, the god identified with the solar disc. On December 24, the priests of the god withdrew to the sanctuaries to pray, emerging at midnight to proclaim: “The Virgin gave birth! The moon grows!” The newborn son of the Celestial Virgin, little Mitra, was depicted as a child. The same child that the Greeks called Dionysus or Adonis, who for the Phrygians was Attis. The divine child who is destined to die in suffering to rise again a few days later. The child is nothing but the sun, which, on the day of the winter solstice, begins to grow in power.  As an adult the god symbolises vegetation, which dies every year and is then reborn.

The birth of Christ was set to coincide with pagan festivities for Mitra, in the same way that Easter incorporated the tradition to honour a dead and risen god. Even today, in Italy, there are traditions related to Christmas that have little or nothing to do with Catholicism. Like the custom, alive until a few years ago, of lighting large bonfires on Christmas night. In the South of Italy, we leave some food and wine on the table on the intervening night between December 24 and 25 for departed souls. It is believed that on the same night, animals acquire the ability to speak because they were present in the stable where Jesus was born, and that the trees in the forest bear fruits of immortality that disappear at the first touch. It is also customary to light a candle on the windowsill to help the Virgin Mary find her way home. All that we consider symbols of Christmas in fact echo Celtic and Nordic traditions and the celebrations of the Druids for the solstice. The mistletoe and the holly, symbols of the sun and of eternal life, were sacred to the Druids. The Christmas tree, like the so-called “palm” that was traditionally decorated in the South of Italy on the occasion of Easter, is a wish for fertility and abundance, a kind of evocation of the coming spring.

And Santa Claus is the equivalent of our Befana or Santa Lucia, a creature of the other world who, in a magical night, enters the world of the living. The Befana arrives the night of January 6, when, according to Christian tradition, the Wise Men arrive to see Jesus. They both bring gifts, but the figure of the Befana is much older, probably born at a time when matriarchy still existed and female deities were powerful. The Catholic religion has merely painted over ancient practices. “La Befana comes at night / with broken shoes …” Thus begins a one-popular nursery rhyme about the Epiphany, though no child knows it anymore. For La Befana, until a few years ago the queen of Italian Christmas traditions, has been replaced by Santa Claus in the hearts of children.

Unlike the jovial Santa Claus, the Befana, who makes her first appearance around the 12th century, covered in rags, an ugly creature of the night riding on horseback, has a double personality, one benevolent and the other a witch. She rewards good children with gifts in a specially prepared sock and punishes the bad ones by leaving them only ash and coal. According to legend, the old woman is accompanied by a host of “befanotti”, the souls of dead children, who keep her company. The Befana can fly, perform wonders and magic, pass through walls and closed doors. It comes from afar, from the East, and speaks the languages of all animals. She lives in the company of a black cat, a hen and a mule. Until the last century, the night of the Befana was traditionally known as the night when witches could be unmasked.

Santa Claus, too, comes from the same kind of traditions–a spirit who brings gifts for children. He is a fusion of Saint Nicholas and some folkloristic traditions including that of Père Noel in France, Julenisse in Scandinavia, Father Christmas in England, but, above all, of Sinterklaus, the Dutch version of Saint Nicholas. The image of the ruddy, plump, smiling old man, accompanied by reindeer and goblins, was born, of course, in America, inspired by cultural traditions and writings including those of Washington Irving.

The symbols of Christmas remain more or less unchanged over the centuries, despite the fact that ancient meanings have now been lost. Only one thing remains–the hope that, at least on this magical night, men will, for an enchanted moment, once again feel innocent and spontaneous.