Why Are We Replacing Art with Horticulture? 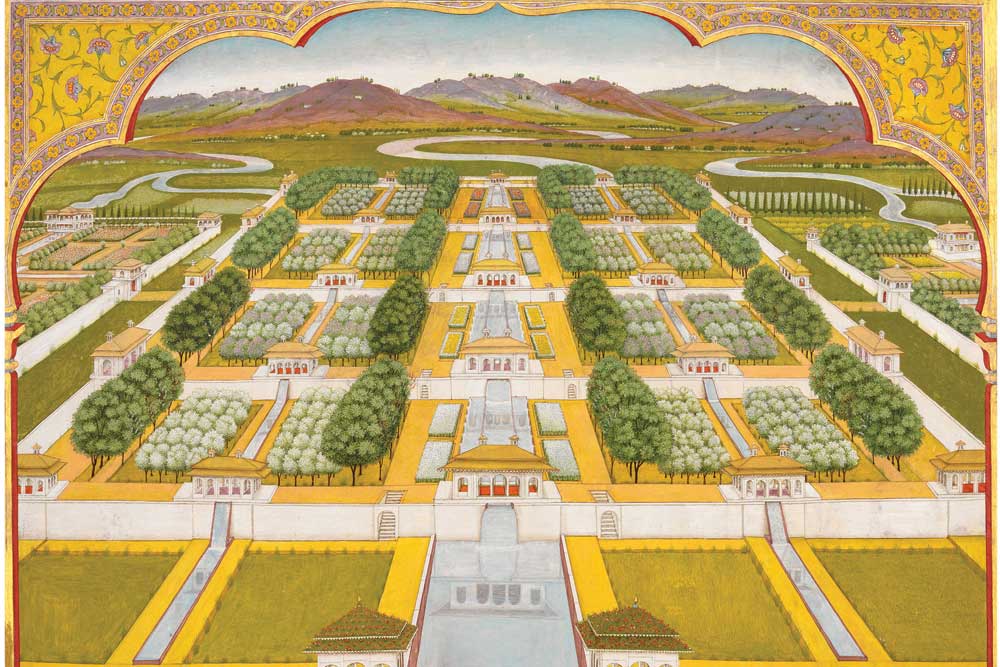 WHILE READING ABOUT garden styles, I was struck by the relationship spatial arrangements of plants and structures have with how rulers display their power, and how memories infuse these designs. We all have fond memories connected to plants—climbing fruit trees as children and plucking guavas, picking henna leaves from the plant growing wild near the school gate and bringing it home, grinding it and then applying it to one’s palms and fingers, and so on. Why should emperors be any different? In his memoir, Tuzk e Babri, Mughal Emperor Babar writes about the gardens of his childhood in Fergana valley, and also describes the beautiful gardens surrounding Samarkand during his first visit to that city: ‘In this Chehar-Bagh there is a variety of different plots laid out one above another, all on a regular plan, and elms, cypresses, and white poplars, planted in the different compartments.’

Imagine his disquiet when he arrived in the plains of Hindustan and faced dusty winds, a relentless sun, freezing cold and the absence of running water. He sought to recreate the gardens from his memories. Charbagh became the governing principle of Mughal gardens— composed of two intersecting lines, dividing the garden into four quadrants, with a platform, sometimes, in the centre. Each quarter is further divided into four sections. Babar deployed the term ‘Charbagh’ in its widest sense to include terraced gardens on mountain slopes and an extravagant rock-cut garden, the Bagh-i-Nilufar at Dholpur.

Bernier, the French physician travelling with Emperor Aurangzeb to Kashmir, mentions how ‘one of the Peeche- Kanes has no sooner reached the place intended for the new encampment than the grand Quartermaster selects some fine situation for the King’s tents, paying, however, as much attention as possible to the exact symmetry of the whole camp’. Where there was no garden kept in readiness against the coming of the Emperor, even the temporary camp was carefully pitched with that regard for form combined with a beautiful site, of which the Mughals were so mindful.

Why this obsession with gardens? For the Mughals, nature is related to rule and dynastic self-representation, says art and architecture historian Ebba Koch. The Mughal badshah—and this seems to be almost exclusively an imperial enterprise— claims nature as his own by making a permanent imprint on it with artistic means, with architectural features, sculptures, and inscriptions. More striking is her observation that Mughal emperors related themselves to such elements which have a special meaning in the Indian religious and cultural tradition. Thus, the claim on nature aligned itself with an ongoing Mughal project, from Babur to Shah Jahan, to become part of the culture of India as rulers.

The attitude to nature—whether it is to be tamed or whether its chaotic effect is to be intensified—defines the difference between the gardens of emperors and aristocrats on one hand, and monastery gardens on the other, highlighting an interesting question about the relationship between temporal/religious power and the concept of order.

Temporal rulers—emperors, kings and nobles—found nature to be Hobbesian in its rampant chaos, plant against plant in a survival-of-the-fittest struggle, and sought to replace nature with a kind of social contract—with themselves the Leviathan creating the frame, shape and content of gardens. This was true not just of the Mughals, but also of kings and princes in the West. Geographer Kenneth Olwig points out that the landscaped gardens of 17th and 18th century England did not grow out of culture and custom; rather, they were politically motivated landscapes (‘Whigscapes’) designed to naturalise the power of the country’s new rulers, the Whigs, who dominated parliament after the revolution of 1688: ‘Steeped in ritual and surrounded by deferential courtiers, a ruler could well believe that the cosmic harmony and beauty so evident in the theater and design of the garden extended to his entire realm.’ In opposition were the customs and traditions of the non-noble gentry and freemen— ‘think of the swarming sensations…[someone] living in the country could enjoy: the odour of fields and meadows baking in the sun’, cricket in the village green, the hubbub of a country tavern. Both sides, argues Olwig, used ‘nature and the natural’ to back their cause. The country folk put forth ancient rights and freedoms emerging out of the soil. The Court had two arguments—one followed the view that a king’s body was biological and political; the second argument, dating back to the Greeks, was that nature was admirable because, like reason, it displayed lawfulness—that is to say, order, proportion and harmony. This idealised notion of nature was found in human reason, not in terrestrial nature (which was chaotic and had unruly weather), but rather in heaven—in the grandeur and orderly movement of the stars.

The formal garden has a strong geometrical design, strong colours, symmetry and strong control over spaces and forms. French, Mughal and Persian empires have followed these principles

The formal garden, in this vision, has a strong geometrical design, strong colours used for contrasts, symmetry and strong control over spaces and forms— the hedges are clipped and pruned rather than left to ramble. French, Mughal and Persian empires have followed these principles in their gardens. At Versailles, the gardens symbolise man and monarch— gardener Andre Le Notre and Louis XIV—taming nature. Chandra Mukerji writes that French formal gardens were meant to represent nature as it was understood by science, full of order and diversity. Mathematicians such as Leibniz were hired by the House of Hanover (the future kings of England) to impose geometry on nature while maintaining the diversity of the natural in the Herrenhausen gardens.

Religious bodies, on the other hand, saw divinity as being sacred and not to be subject to man-made designs. Here, there is a difference between Eastern religions (Shintoism, Hinduism, Confucianism, Buddhism) and Christianity. The Pope’s garden replicates that of the temporal ruler; the Pope as the representative of God on earth can control nature. Christian monastery gardens followed Roman patterns of the functional division of the space. Early monastic establishments followed a ground plan derived from that of the Roman villa, whose central colonnaded courtyard evolved into the cloister. Set within rectangular bounds and often centred on a fountain, cloister gardens were designed specifically to foster contemplation.

By contrast, Japanese, Buddhist, Hindu and Chinese gardens intensify the effect of nature through a series of replications. The 11th century Japanese book on gardening, Sakuteiki, presents nature as a combination of images of the martially man-altered environment and wilder scenes. Natural scenes were studied and developed into stylised forms. The author of Sakuteiki writes: ‘Water flows more rapidly through narrow channels; where the river broadens it will relent. At this point a sandbar should be created. A Middle stone should be set at the head of such a sandbar.’ And later, he writes, ‘Where water flows out of a bend, it flows with great force. As it turns diagonally, consider where the water would strike an obstacle most powerfully and at that point set a Turning Stone.’ Sakuteiki’s concept of gardening can be summarised as designing with nature—landscaping the garden, keeping the natural landscape in mind and following nature.

Buddhist gardens followed a similar philosophy. Much of the structural design of these gardens is related to geomancy (feng shui); its principles originated in ancient China and were used to explain how the natural world worked and to guide man’s machinations within that world. Chinese traditional landscape design emphasised the understanding and development of natural beauty; by contrast, European landscape gardens focused on refining the natural elements as an abstract sense of order and formal beauty. The Chinese style later influenced early 18th century English landscape gardens, which rebelled against the formal style and highlighted the irregularity of nature.

THERE IS ANOTHER aspect to this relationship between geometry and power that is shared by religious and temporal garden designs. The harmonised symmetry in a garden can evoke and generate power in individuals who come there for spiritual contemplation. Persian gardens, for instance, are imbued with the spirit of providing a space for restful contemplation. A garden is seen as a replication of paradise on earth. “There is a focal point in every Persian garden that addresses healing, such as the ‘focus of tranquillity’, which is placed at the centre and it becomes less forceful by the elements located around. It provides an orderly and strong placement of spaces and defines their places and values through hierarchy, repetition, pattern and rhythm,” says landscape architect Reza Ramyar. A classical or symmetrical order in Persian garden divides the space along an axis or around a central point and arranges the garden forms in a mirrored order. This offers the user a highly ordered, structured and balanced appearance which conveys a sense of universal harmony and is considered important for health too. Linear paths strengthen the visual effect by placing the space within boundaries, which are vertical elements— trees and corner walls.

Tranquillity is a motif in Mughal gardens too, where, paraphrasing CM Villiers Stuart, author of Gardens of the Great Mughals, instead of winding drives that may give a sense of restlessness, the cosmic cross on which the old gardens are based—the long lines of waterways and paths, hedged in by trees, produce, ‘a wonderful sense of stately dignity and peace, while the tranquil breadth of water repeats the flowers, trees and buildings with a double magic charm, till the whole garden seems full of that mysterious beauty, that comes of the sense of calm continuance.’ Mughal gardens too drew their inspiration from the paradise described and explained in the Qur’an. Adherents of Islam view the garden (‘hannah’) as the ultimate and eternal abode of a person who has followed a righteous path. The Sura Rahman describes the garden of paradise thus: two gardens, two fountains spreading branches, every kind of fruit in pairs, dark green with foliage, two abundant springs. The ‘two’ here denotes symmetry. Cypress trees, being evergreen, are a symbol of eternity for Mughals and of feminine beauty for Persians.

With such a rich tapestry of gardens in our history, it is puzzling why in modern-day India, gardening in its artistic sense (the spatial arrangement of the plants and structures) took a backseat to gardening in its horticultural sense (improving the form, scent and colour of the plants). Villers Stuart attributes the decline of garden design in India to two causes: the coming of the railways and the ease of access to hill stations, which brought a change of habits and manners; and the introduction of the English landscape garden, the mock wild garden that surrounded English homes in the 18th century. As the English houses grew more formal and severely classical, the gardens, as if in protest, lost all form, and the fundamental principle of the relation between house and garden was completely lost sight of.

I wonder if the way democracy visualises power—people learn to rule and be ruled in turn—has something to do with it. Are we playing out the Aristotelian view of democracy? ‘Everyone lives as he wants and ‘toward whatever [end] he happens to crave’ as Euripides says. But this is a poor thing.’

In doing so, have we forgotten nature? I hope not.

Of late, central Delhi’s horticultural department seems to have regained that sense of artistic gardening. The arrangement of Ficus benjamina and Bismarckia nobilis in roundabouts, and avenues flanked by neatly trimmed hedges of Golden duranta and boxwood, and competitions for city gardeners to design interesting combinations of perennials and seasonals in the parks under their watch—these are signs of a revival of artistic garden design in the capital. One hopes that the city’s denizens will follow suit.