The House of Scindia: The Family Reunion

The House of Scindia is now painted completely in saffron 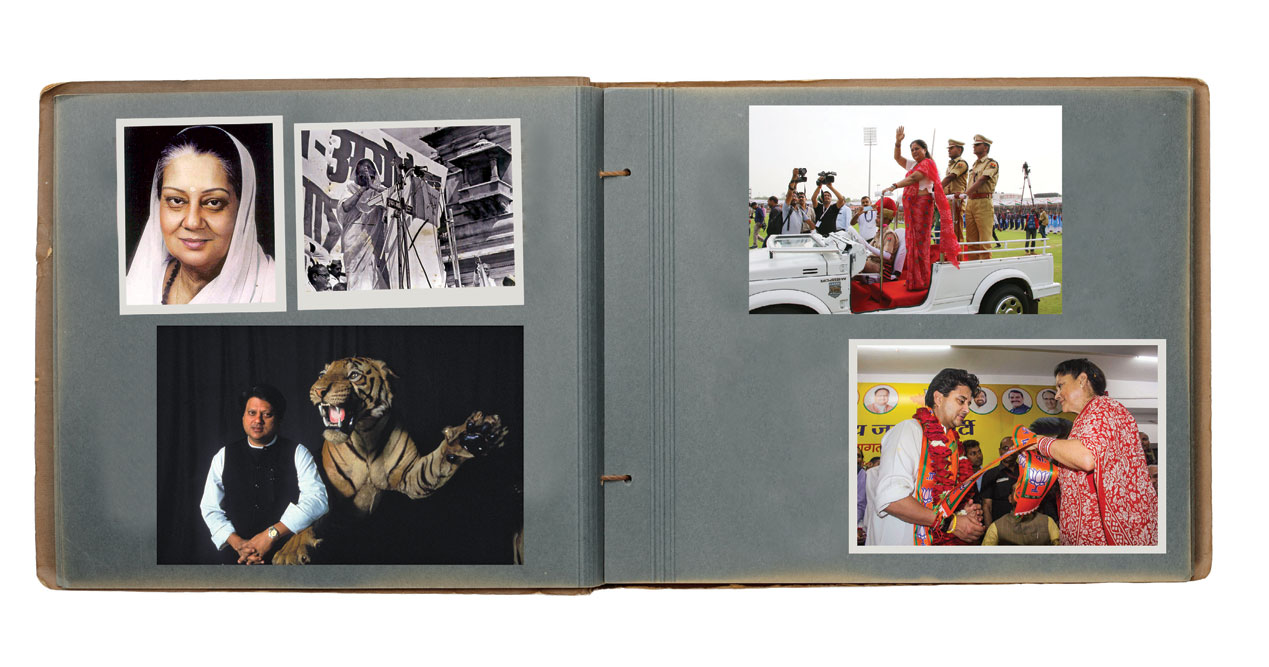 
MAHADJI, THE FIFTH and youngest son of the founder of the House of Scindia, was considered the most powerful man in India in the late 18th century. Under him, Gwalior became the leading principality in the Maratha empire and one of the foremost Indian military powers. He restored the Mughals to Delhi, accompanying Shah Alam II there in 1771. He destroyed the Jats of Mathura and the Pashtun Rohillas, restricted the Nizam of Hyderabad to the Deccan and, most importantly, humbled the British in the First Anglo-Maratha War.

That was perhaps the greatest hour for the House of Scindia, equalled only two centuries later, in the rise of his descendant Jivajirao’s widow, Vijayaraje, who was instrumental in the establishment of the Bharatiya Jana Sangh, the predecessor to the BJP. Her only son, Madhavrao, fled the Jana Sangh (and briefly India) at the height of Emergency and in 1979 crossed the Rubicon by joining the Congress, leaving behind the mother and eventually two sisters in the extended Sangh Parivar. Over 40 years later, “the homecoming of the prodigal grandson”, as Yashodhara Raje has described Jyotiraditya’s departure from the Congress, has again united the once and future Hindu kingdom.

Their story has all the ingredients of a royal potboiler. A long-running feud between the Rajmata and her son, with the former even declaring in an election campaign that in older, feudal times, she would have had his head crushed under an elephant’s foot, just as Ahilyabai Holkar had done. A Rasputin in the royal durbar, Sardar Sambhaji Chandroji Angre, always wielded influence on the Rajmata. A so-called family curse has seen many men dying before 55. Riches include the 900-room Jai Vilas Palace in Gwalior on an 80-acre plot with much of the furniture and even fountains made by heritage luxury brand Lalique in the 1930s. And a bitter rivalry with another self-styled royal family, the Nehru-Gandhis.

The war between the Rajmata and her son was not so much about property or even personality, but ideology. On one side was the Rajmata, fiercely dedicated to the Sangh Parivar, so much so that in 1982, she announced she would hand over the Jai Vilas Palace to Vidya Bharati, a Sangh Parivar educational organisation, to run a “truly Indian public school”. A powerful fundraiser in the Jana Sangh, she supported the careers of influential men, from former Prime Minister Atal Bihari Vajpayee, newspaper baron Ram Nath Goenka to political activist Acharya Kripalani. A deeply religious woman who spent two hours every morning praying to her little Krishna idol, she was one of the architects of the Ram Janmabhoomi movement that led to the demolition of the Babri Masjid in 1992. As William Dalrymple writes in The Age of Kali (1998), she was among those cheering from the viewing platform as the three domes fell. She could die without regret, she told Dalrymple after the event, now that her dream had come true. And though she was a maharani, she lived simply, if elegantly: her vegetarian meals were in a silver thali and her puja paraphernalia was always carried in a Gucci tote bag.

The mother-son battle was made even more toxic by the latter’s association with the Nehru-Gandhis. Vijayaraje, arrested during Emergency and locked up in Tihar Jail for months with criminals and prostitutes, never forgave her jailers. She may not have actively encouraged the sale of Maneka Gandhi’s Surya magazine to Sardar Angre in 1982, but her bete noire, Indira Gandhi, never forgot it. Neither did Indira Gandhi forget—or forgive—the Rajmata standing against her from the Janata Party in the Raebareli Lok Sabha elections in 1980.

When Vijayaraje died in 2001, a few months before her son, it was an occasion for the airing of more dirty laundry, with Sardar Angre trotting out a rival will supposedly authored by her in 1985 in which she said the harshest things about her son, including forbidding him from carrying out her last rites. That duty was bequeathed to associates like Angre, who, though two years Vijayaraje’s junior, was praised as “this most loyal man of the Scindia royalty”. Another 1999 will was less hurtful to Madhavrao. Adding to the controversy was grandson Jyotiraditya’s petition seeking disposal of the property by primogeniture that makes the eldest offspring the inheritor. Perhaps now a private settlement with his aunts will be possible.


“It’s the homecoming of the prodigal grandson,” says Yashodhara Raje

The Scindias haven’t always been on the right side of history. During 1857, unlike other Marathas, they collaborated with the British, becoming one of the five most important native princely states of the Raj. The British were worried they would join the rebels, with the then Governor General Lord Canning saying “if [Jayajirao] Scindia joins the rebels, I will pack off tomorrow”. Later, he said, “The princes acted as the breakwaters to the storm which otherwise would have swept us in one great wave.”

Vijayaraje performed quite the opposite role at the height of the persecution of opposition leaders by Indira Gandhi in 1975. In Durbar (2012), Tavleen Singh details how the Rajmata was one of the pillars of the resistance and constantly on the move to avoid arrest, helped by one of her political aides: soon-to-be Foreign Minister Jaswant Singh, also Angre’s brother-in-law.

Journalist Rasheed Kidwai, finishing a book on the Scindias, says like the Nehru-Gandhis, they believe it’s their destiny to have a role in public life. “Just as the Rajmata dabbled in the Congress, Jana Sangh and Swatantra Party, and Madhavrao served as a Jana Sangh MP, Jyotiraditya [too] is displaying remarkable ideological flexibility,” he says.

Their sense of destiny comes from their history but also from their matriarch. The Rajmata, as Dalrymple has written, always elicited extreme reactions. She was either a madwoman or a saint, ‘a dangerous reactionary or a national saviour, a stubborn and self righteous old lunatic or a brave and resilient visionary’. He describes her and Angre (whom he memorably compared with Blofeld, the villain in James Bond’s Goldfinger) as a good team. ‘He is as dry, sober and practical as she is mystical and quixotic.’

BJP’s Sudhanshu Mittal says they have distinguished themselves, irrespective of the party. “Vasundhara was the first woman Chief Minister of a state which is so feudal and does not give space to women in public,” he says, adding, “The Rajmata was most revered across parties.” With two daughters (Vasundhara and Yashodhara) and two grandsons (Dushyant Singh and Jyotiraditya) in the party she helped found, the BJP has all four politically active Scindias in its fold. Once riven with rifts, the Great Hindu Undivided Family now stands firmly within the greater Hindu Parivar.