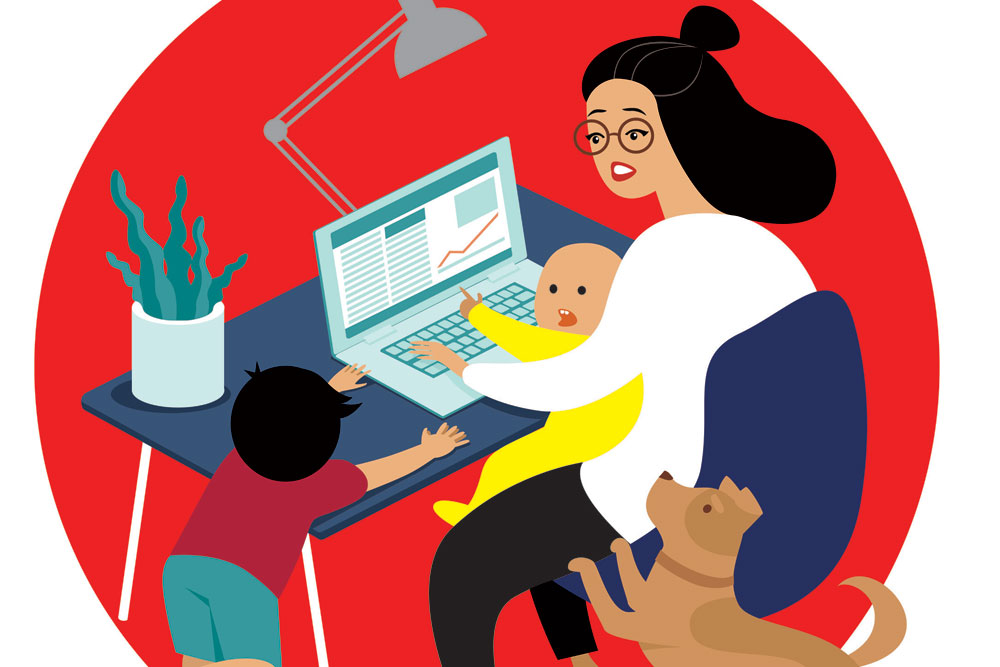 
When the lockdown was announced late on March 23rd, Pearl (name changed on request) and her husband found themselves exceptionally unprepared. Like many others, the two would now have to work from their home. Pearl hadn’t been issued a laptop by her office. The one in her house, she soon found out, had a broken audio port system, thus making her visible during her department’s daily videoconference meetings but keeping her inaudible. To add to her and her husband’s woes, their house lies in a poor mobile-network area. Remain in the house , your mobile phone becomes unreliable; step out and stand perilously close to the street, the phone comes alive.

And then there was that most peculiar of Mumbai problems. She lives along with four others (a 12-year-old daughter, her husband and in-laws) in an enviable part of Mumbai’s central region but in a house that exists entirely in a single-room apartment. And so with her in-laws banished to an invisible part of the room (their TV switched off), her daughter kept occupied with YouTube videos on Pearl’s father-in-law’s mobile phone, she now logs into work, making herself visible on videoconferences
but sending her voice separately by dialling in through a landline phone.

Her husband, who holds a senior position in the operations department of a multinational bank, meanwhile, set his office—his laptop on a stool, a chair for himself—by the water tank right outside his ground-floor house. To protect himself from the blazing afternoon sun, he fixed a bedsheet above him.

“The first week [of lockdown] was quite difficult,” he says. “But now it has got a bit better.”

He has now managed to shift his work inside his house and ensured that all phone calls to him are made through online apps (his WiFi is more dependable). Also, he doesn’t take any work calls in the evenings, so his parents can catch up on TV shows.

“It is a difficult arrangement,” Pearl says. Her in-laws’ routine has been turned upside down. They rarely catch up on their afternoon naps now or keep themselves occupied by watching TV. But the entire household has come together to share the chores, with even the daughter chipping in.

“Before [the lockdown], we would wake up in the morning and be out of our homes in a few hours. We would hardly be in the house. Now, all us are together day in and day out,” Pearl says. “But what can you do?”

Like Pearl, people the world over have been thrown into this big experiment called work from home (WFH). It’s something many of us have wished for in the past: flexibility and breaking out of the 9-5 norm, to fit in the dentist appointment and the school pickup with the office job. And now that it is here, it doesn’t seem to have the same promised joy.

There has been much amusement. Some, listening to their husbands do presentations in the next room, have reported on Twitter that they have discovered that their spouses’ have ‘work voices’. Some have accidentally reported to Zoom video meetings without their shirt on. One designer in a large e-commerce firm in Bengaluru tells me that she once hummed an entire song not realising that there were around eight people live on a conference call. Another, who works in a media institute, tells me how some students log into Zoom classes with odd usernames such as those after porn stars such as Mia Khalifa.

There has also been, especially for those working in large companies where employees tend to ironclad the separation between personal and professional lives, an opening up of the human and personal lives of the people they may sit next to but know nothing of. They are getting to know them little by little, a slight peek through a Zoom window at a time of the picture hanging on a wall, the children running around behind.

One of the funniest Twitter accounts to have emerged from the lockdown is Room Rater (Twitter handle @ratemyskyperoom) that rates the houses of people now forced to appear on TV. A New York Times reporter who appears with the backdrop of a bookcase and an empty wall was rated two over 10. ‘For god’s sake man—hang something on that picture hook—it’s been days,’ he was told. The reporter responded by hanging up two pictures and improved his rating to a six; he lost a point for hanging one of the pictures behind a door.

But for many, at least in India, WFH is wearing thin. They may be saving up on commute, but they are working longer hours, invariably even taking up time during weekends. The line between home and workspace is blurring. Bosses are often distrusting. Moreover, the typical urban Indian household with their large families and small apartments, where there is invariably more than a single person in a room, isn’t necessarily built for WFH. And unsurprisingly, the workload of most working women, who are juggling their office work while running a household with all its members present, is increasing.

“I feel really bad, and I try to do what I can, but I know she’s facing the brunt of it,” says Vikram (name changed on request), a Mumbai-based employee with a multinational consulting firm, referring to how the workload has increased for his wife, who works for a film production house. The two live with their two toddlers along with his mother-in-law in a suburban locality in Mumbai. Although he would like to help his wife more in running the house and keeping the children occupied, he says, the lockdown, along with fear of loss of revenues for the company he works for, has meant that there is more pressure to put in more hours. “[The company] wants to show to its clients that the lockdown is not going to affect its performances, so we are pushed harder. I’m in meetings now as early as 8.30 AM and often I get done with work very late into the evenings… Even this weekend, I’ve been entirely caught up preparing for a large workshop some of us have to make in a few days,” he says. “WFH is tough in our sector. Normally, we would have flown down for these workshop events because we rely entirely on face-to-face interaction. And now here we are trying to do this online.”

Vikram is also making do with whatever challenges working out of a house with two locked-in toddlers can throw. Although he lives in a relatively large house, poor mobile and WiFi network coverage means he can only work out of the hall, which also happens to be the space used by the rest of the family. “It was very difficult, especially with all the noise the children make. But it would be unfair if I told them they can’t be here. So I let them be,” he says. “And now I’ve kind of got used to it, even with the noise.”

There are however still some goofups. He recently attended a call not realising it was a video call while smoking a cigarette. And about a week ago, he had a taste of what others too are facing. During a meeting, he found two of his client’s children skulking behind, making faces. “I didn’t tell him about the kids. Poor fellow would have been embarrassed.”

There was however no saving from embarrassment for the presenter of the Broadcast Audience Research Council (BARC) conference earlier this month. This joint industry body that comprises broadcasting, advertising and media agencies was hosting a virtual conference on Zoom about TV and smartphone consumption trends during the lockdown, with some 600 individuals logged in, when, midway into the presentation, the platform got hacked and pornography was played instead of the prepared slides.
Various employees have also complained about their bosses’ lack of trust in them. A prominent logistics service provider in Bengaluru has been accused of making its employees sit in front of their laptops at home during what would have been their office hours with their webcamera switched on.

A few weeks ago, Priya (name changed on request) was confronted by a team member when she insisted that everyone who attends office meetings has to do so with their cameras switched on. “She told me she thought there was lack of trust. So I explained to her that’s not the case… . Had everything been normal, we would have been in office doing these meetings. Now it’s just that with this lockdown, the office is now in your house,” she says. As Priya describes it, theirs is a high-pressure job, one that is meant to be done in constant interaction with one another. “With WFH, everything becomes very distant. If you don’t even do video meetings, it makes it even worse.”

Priya is a Delhi-based sales head of several Indian regions of a large firm. Although the company she works for has been severely impacted by the current lockdown, it is also taking on many new projects and opportunities that this period is throwing up. “So it means a lot of work for all of us. And it’s not like we dislike doing this. The company has been very good. But none of us were prepared for this. So we are all on a new terrain hustling around.”

All this means that her work hours are now round the clock. She works around 16 hours and just about manages to steal a few hours with her family here and there. To help cope with the work pressure and this feeling of remoteness from their office colleagues, her team now organises ‘happy hours’, where every few days an hour or so is set aside for a team recreation. All of them now gather in front of their laptops to unwind over drinks and games. “We work hard always. But that doesn’t mean even if there is WFH that we can’t party,” she says.

In Pearl’s household, the situation improved for her husband about a week into the lockdown once he managed to ensure that everyone calls him via online apps and he moved his laptop indoors. Occasionally, however the phone will ring and he will have to step out.

“But then some number will be discussed,” Pearl says with a laugh. “And he will have to come rushing back into the house, check the figure on the laptop, and then go out to complete the call.”