An Oath to Keep With a Final Breath 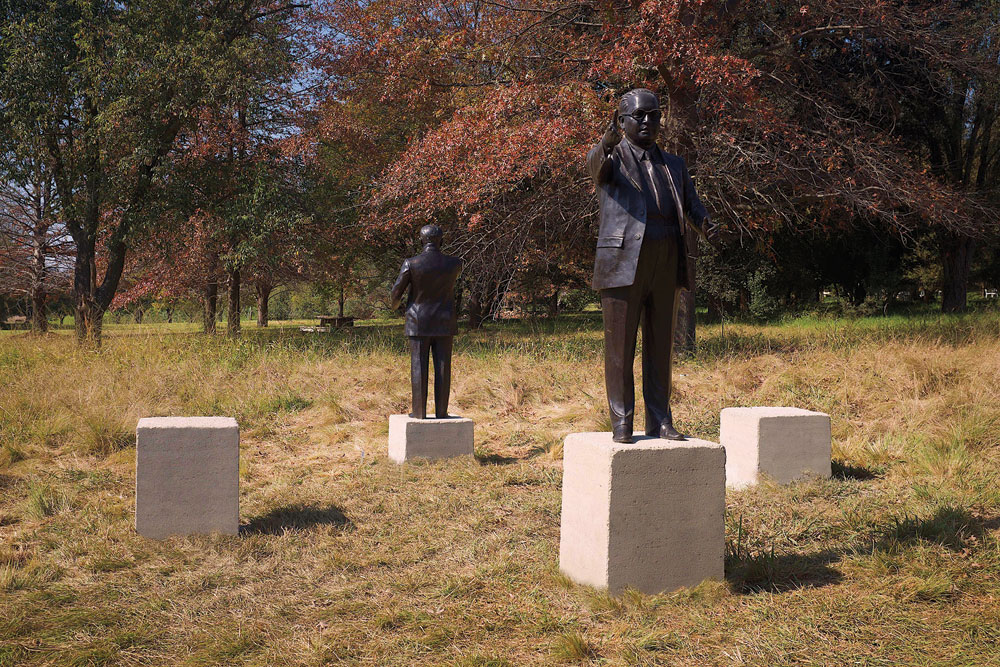 
Ambedkar had once talked about the freedom of the mind, which, he averred, was the real freedom. In hindsight, I am sure, he was referring to thought control that is symptomatic of an ailing society, ailing not because of lack of natural resources or world standing, but because of a disequilibrium that arises from people being judged harshly for their frank opinions.

The idea of a free person is vastly different from a slave, a term that throws up multiple images of a person condemned to servitude, especially physical confinement and debasement, the arrogant assumption being that they don’t think or are incapable of thinking.

Great thinkers have and continue to influence societies we live in. They have all wanted to make the world a better place, yet we continue to relapse and fall into entrapments of dogmas and beliefs that refuse to set us free. The trend of followers of great ideators veering away from the original vision shows no signs of course correction.

A constant intervention is imperative to keep the world from receding into a recklessness of old habit, of letting go of one’s control over choices, individual or collective. We have a lot to learn from both Enlightenment and anti-Enlightenment philosophers and thinkers. They inspire us to strike the balance and to not allow life to become mere existence or subjects of anarchy. We still let discriminations persist, by force of habit, over gender, faith, age, race, ethnicity, region, intelligence, sexual orientations, occupation, body shapes and more.

True, the world has come a long way from early migrations and advanced at a breakneck speed over the past century thanks to technological advancement. Mindnumbing as it may be, we cannot afford to lose sight of our priorities, especially the right to dissent. It was in this context that the great John Adams reminded us, “If conscience disapproves, the loudest applauses of the world are of little value.”

Being a free person, therefore, is an unending fight against forces that tend to chain our instinct to resist and disapprove. My works here, however grim they may appear, I believe, mirror that conviction to fight on.

The work titled Fourth World represents Ambedkar in conversation with the word and the world. These statues, unlike the traditional ones of Ambedkar, are without the Constitution and the gesture of hand leading to a conclusion. Here Ambedkar is reworked as a figure who is always already awaiting, anticipating, conversing and is seen embracing an open conversation through the gesture of his hands. These were installed in 2019 at Nirox Foundation, close to Sterkfontein caves in the cradle of humankind, Johannesburg. Given India’s colonial linkages with South Africa and Gandhi’s formative experiences there in a politics of struggle against racism and segregation, the work tries to situate the other half of the missing past, merging it with the present in the form of bringing back the missing imperative of the dialogue. Ambedkar continues that tradition of struggle against atrocities everywhere.

This work overwhelms the viewer by the strength and support of its physical dimensions, 6ft tall and 17ft wide. The Dandi Bridge is a historic site that connects the present through its linkages with a certain past, thought and action, dreams and possibilities through the visual site of the bridge as metaphors of distance and closeness. Here, the bridge is known by its opposite—in keeping two landscapes apart, it also unites the two horizons. It’s a visitation from history, a wake-up call, or an appeal to just remember. When our hopes turn into shambles of despair or when we become the victims of tragic injustice and exploitation, we are forced to remember the sacrifices and history of Disobedience and become truth-seekers. 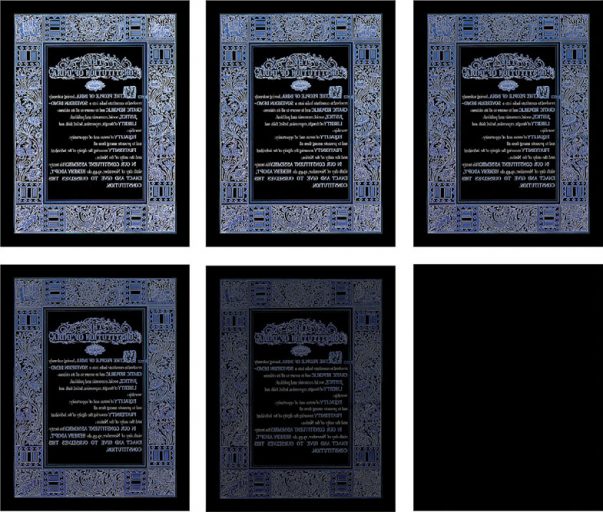 A diminishing Preamble to the Constitution, Fear II is not just an archival document or a general document to be misplaced, but a daily reminder of past struggles along with present resistances. Reading the inscribed text as words glued together separated by blank spaces makes the Preamble as a text for everyone to follow, as a prayer, not only when the text is in crisis but to put every crisis at a distance. People reading the Preamble through acts of repetition then becomes a gesture of seeking speech, freely, and disseminating the axiomatic call of equality in a time which seeks it most. Reading again and again becomes a motif for making the text reappear against the culture of fear which serves to erase from the public memory what has been written by and for themselves.

Dhamma Swaraj is an intimate conversation with the tradition of being and philosophical ways of living in discursivity—a communication with the self and the outside. Today, it is not lack of ideas or technological solutions, or dearth of material and human resources that limit humanity’s capacity to address conflicts and dilemmas; it is the forgetting of the very long tradition by way of which our ancestors dealt with everyday conflicts. Today in the realm of thought, modes of action, ways of being and possibilities of becoming what we need is cross-pollination, grafting and weeding of sorts—tradition, figures and political time. Dhamma Swaraj is conceived as a proposal for indulgence in the middle path evoked by the thought of Buddhist tradition. It can be conceived as a work that does not limit itself to the frame. The figure of Gandhi is evoked as a mode of understanding the limits of being inside a frame. Here, Gandhi, pushed out of the frame, is seen merging with the figure of Ambedkar and into the worldliness that transcends the image and imagination itself. The work deframes Gandhi and disperses this figure to form communes of possibilities and promises, beyond borders (most notably our own) to seek potential friends rather than enemies, in the figures of outcasts of history. 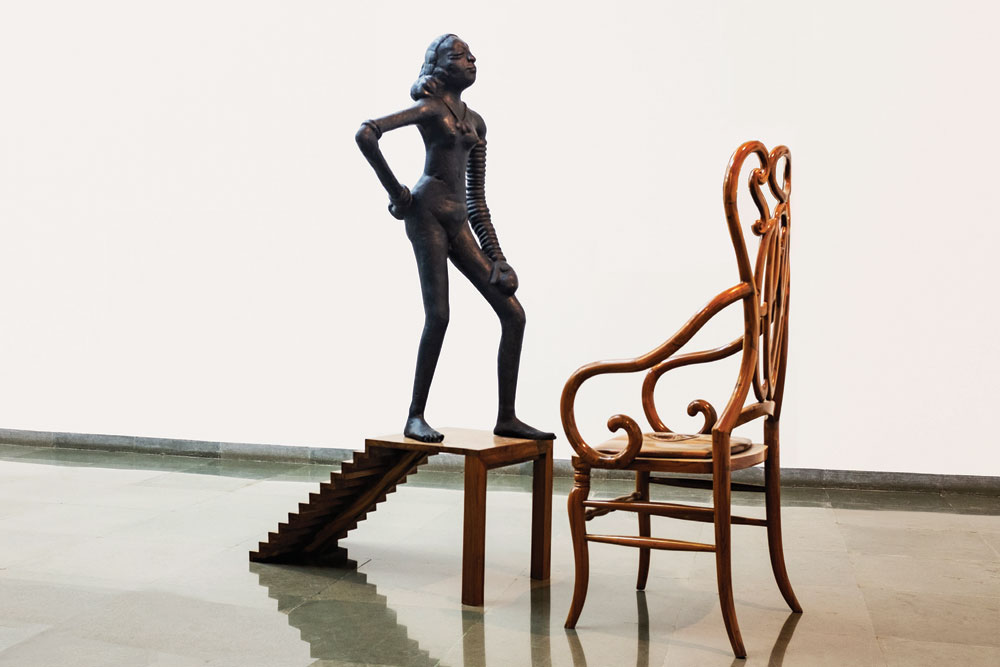 I think therefore I am is an attempt to invoke civilisational depths against the vulgar display of modernity laden with symbolisms of power. Dancing Girl is also one of the oldest archival artifacts from the Indus Valley and is considered the first art object found in India. It evokes the deeper layers of the meaning of aesthetics as inheritance of forms that still have the element of surprise and speak truth to power; in a differential hermeneutics of change. Juxtaposed against the design of the chair of the presidential palace of Lutyens’ Delhi, I think therefore I am is an attempt to trigger aesthetic, historical as well as political questions, if you will, by a subtle movement of ideas, materials and the gaze. 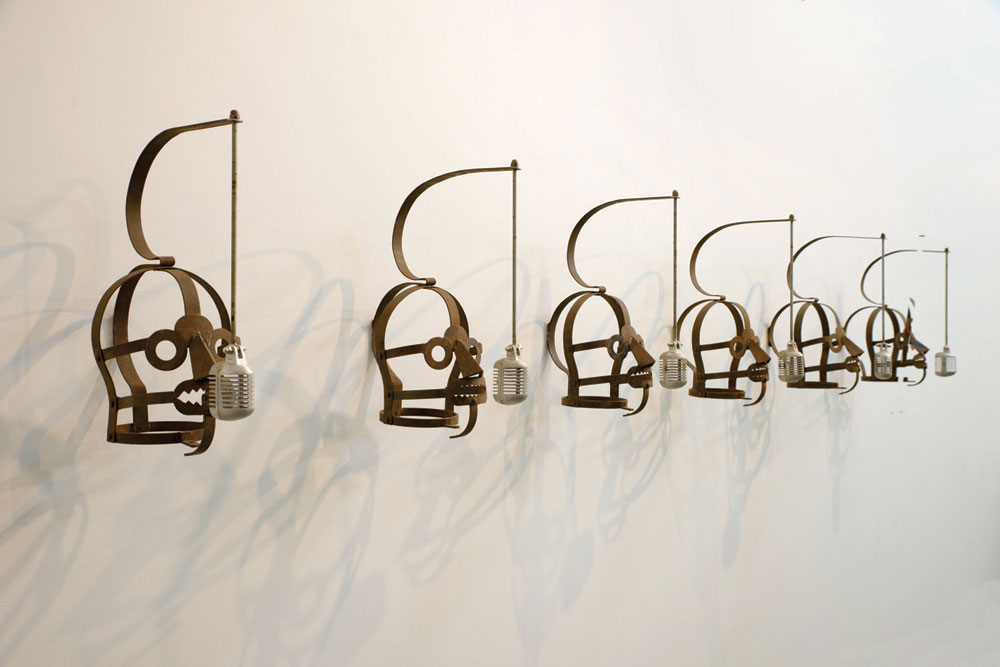 Song Unsung is a new way of coming to terms with the genealogy of torture as bequeathed to modern democracies by medieval times. This work is among a series of other works that as an artist I am tremendously drawn to. Torture in the 21st century is still a medieval form of punishment for securing confessions for the ends of ‘democratic’ states. Also of note is the way in which the entire procedure is worked upon to stop speaking and thinking from happening with the medieval imageries of locking the mind before the tolling bells. This work represents, allegorically, the entire system and procedures of so-called modern democracies where speech, through which democracy represents itself via the phenomenon of voice, is silenced by the power of terror and torture.