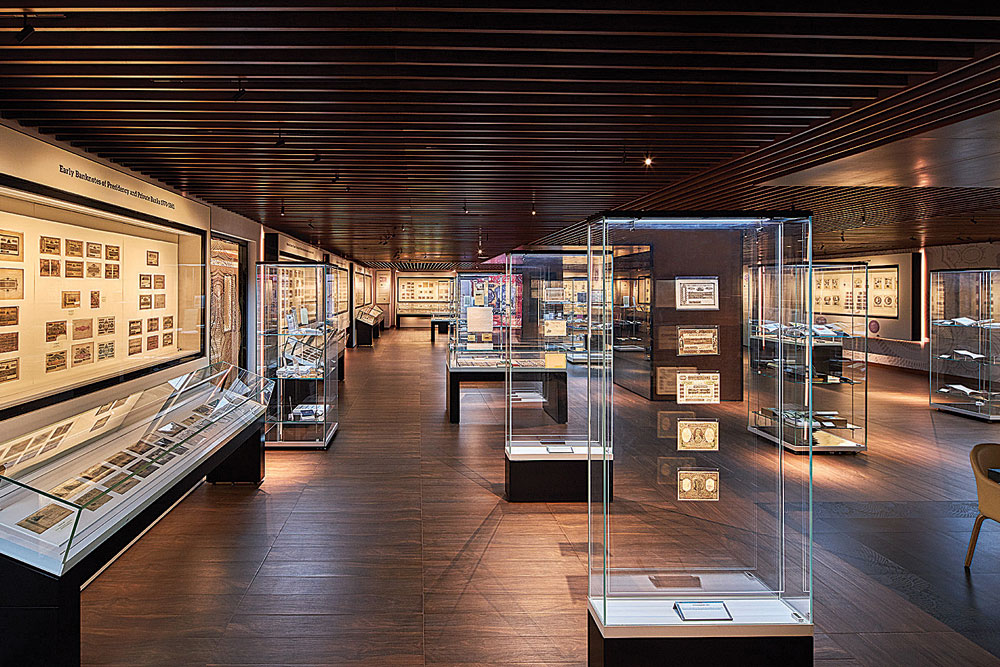 
WHAT COSTS ₹ 5 to manufacture and is worth ₹ 2,000? A ₹ 2,000 currency note, of course. “Banknotes are the most outrageous con in history,” says Rezwan Razack, real estate mogul, foodie, numismatist and collector extraordinaire, at his dream project, the Museum of Indian Paper Money, in central Bengaluru. Whether you scrape by or roll in it, there is no better place to learn about money and the financial and geopolitical capers that have informed its design, value, denomination and circulation over two centuries. Occupying a floor of Prestige Group’s brilliantly lit palace of a corporate office—the building was designed by Bengaluru’s Thomas Architects and the interiors as well as the museum by Singapore-based hospitality designer Thom Catallo—it houses nearly every kind of currency ever printed in, by or for India: from the oldest surviving note from 1812 issued by the Bank of Bengal and early presidency bank notes of ₹ 10,000 that were encashed like cheques, to Haj rupees, Indian notes used in Burma and Pakistan, British-Indian and princely state currencies, hawala notes and war camp coupons, and even a ₹ 2.5 note. Showing me around this elegant hall of antique currency, the joint managing director and cofounder of one of south India’s leading property development companies, Razack, 66, turns it into a hopscotch through India’s transactional past. “Before the 1940s, cotton traders were among the first to use large-denomination notes for fear of theft during travel. The “money” was often cut in half and one-half sent by mail, to put back together upon completion of the trade. When produced and encashed at a bank, it could then be marked “cancelled”,” he says, as we amble past the glass displays with specimens of pristine, cancelled and dissected ₹ 10,000 notes.

At the time, one could have bought a large piece of land in central Bangalore for that sum, Razack says. You could be forgiven for thinking the Prestige Group has been in realty for generations. Razack’s father, in fact, had a men’s clothing store on Commercial Street—Prestige The Man Store still stands right where it was. In the 1980s, his sons began to dabble in buying and selling property. “We started trading first, then slowly got into building and selling. It was all commercial real estate at first. The idea was to build and rent, but tenancy laws of the time weren’t conducive to this. So, we decided to sell office space instead. We were the first in the country to sell divisible office units. My first project, Prestige Court, built in 1986, was a success. Now, of course, we have 140-odd developments to our name, with another 50 in the works. We have put up malls, hotels, plots and homes. You could argue that there is no need to go on doing this anymore, but once you have created a monster, you have to feed it.”

The monster that is the demand for property in India slumped for the first time in years with demonetisation in 2016, but that is not why Razack is a critic of the move to make most of the country’s currency illegal overnight. “All three demonetisation drives—in 1946, 1978 and now in 2016—were failures, but the third one has set the economy back 20 years,” he says. While India prints all of its notes—the presses are in Nashik in Maharashtra, Dewas in Madhya Pradesh, Mysuru in Karnataka and Salboni in West Bengal—till recently, it imported many raw materials needed to make money. For instance, most of the paper came from Germany’s Giesecke & Devrient, Britain’s De La Rue, and others. Upon Prime Minister Narendra Modi’s urging, some of it is now made in Mysuru. “The size of the banknote depended on the size of the paper imported, so as to minimise wastage. I remember my grandfather carried a passport-sized wallet to hold money, which used to be large and rectangular in his time,” Razack says. One of the souvenirs you can take home from the museum is the shredded waste that remains after paper is magically transformed into money. The museum packs the coloured shreds in a decorative glass jar—the infinite pieces a metaphor for the inexorable plot of capitalism. But chances are that you may have already unwittingly come into contact with these if you have bought plywood from one of the brands that buy the waste material from the Government presses and compress it to turn it into furniture.

THE BRITISH SET up the country’s first currency printing press in Nashik in the late 1920s, says Razack, who co-authored The Revised Standard Reference Guide to Indian Paper Money. He has a historian’s narrative flair and eye for detail, and the conversation careens into fascinating bylanes, throwing up many biographies that could well have been film scripts. We meet Henry Archer, a designer, artist and engraver at the Currency Note Press in Nashik from 1928 to 1952, who prepared preliminary sketches, essays, proofs and final designs for many of India’s banknotes up to Independence. He is followed by India’s very own master engraver, PB Chitnis.

There are also unexpected insights into the minds of political personalities. When an official took proofs of ₹ 20 banknotes for approval by then Prime Minister Indira Gandhi, she did not like any of the colours. “She pointed to the saffron of a wedding invite that showed through the bearer’s shirt and said, “I want that”,” Razack says. Not surprisingly, it was Morarji Desai, a follower of Mahatma Gandhi, who asked for artists to send in their entries to the Gandhi Centenary Commemoration Notes Competition in 1969; the winner’s portrait of Gandhi would be featured on a currency note. “It was Nanjangud-based portrait artist NS Subbakrishna’s sitting Gandhi that won the prize, a sum of ₹ 1,000, and made it to a banknote. I met his daughter in Mysore, who told me Subbakrishna lived in the outhouse of a politician’s residence in Delhi after he was elected MP [Member of Parliament], and painted many of the portraits that hang in Parliament today,” Razack says. 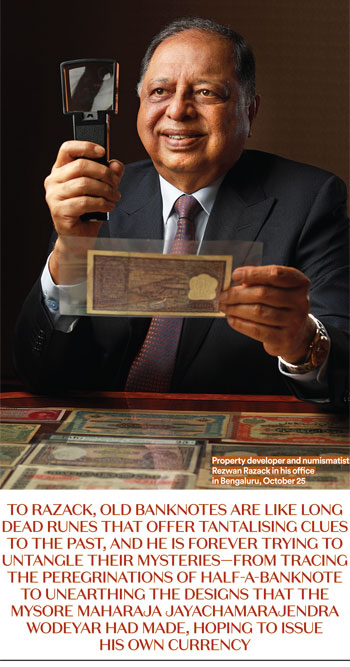 Mahatma Gandhi would have replaced the portrait of George V on the Indian currency note upon Independence had there not been a lobby for Netaji Subhas Chandra Bose, he adds. The Ashoka Pillar was a suitable compromise. The first set of British India notes were the “Victoria Portrait” series issued in denominations of 10, 20, 50, 100 and 1,000. The uni-faced notes were easily forged, however, and replaced by a series printed with Indian language panels. “In 1905, when smaller denominations were issued, they were now legally encashable anywhere in the country—not just within one of the seven currency circles that they were issued in,” says Razack. There must have only been a few crore rupees in circulation then, he says. With World War I came a shortage of metal, and India, too, was running out of silver. America lent a helping hand, melting down 2,000 tonnes of their silver and shipping it to us. Banknotes were, meanwhile, gaining in popularity. Razack points to a glass box showcasing a 1936 communication from Buckingham Palace. Next to it is a side profile of King Edward VIII sent to the Palace for approval to be used as a currency watermark. The letter hopes sardonically that “something will be done to make whatever he is supposed to be wearing look less like a bath towel.” From the currency notes in the adjoining display case, the robe was then suitably touched up. King Edward VIII reigned only for a year, abdicating his throne to marry a divorcee, and George VI, the father of the present Queen of England, took over. “During the war, Japanese operations to destabilise Indian currency involved high quality forgeries, largely of ₹ 10 notes signed by Governor CD Deshmukh. This necessitated a change in the watermark and obverse design from the profile portrait of George VI to his full frontal portrait. As an added security feature, the security thread was introduced for the first time in India,” says the Reserve Bank of India website. “The King’s portrait motif continued as an integral feature of all paper money issues of British India. The Government of India continued to issue currency notes till 1935, when the Reserve Bank of India took over the functions of the Controller of Currency. These notes were issued in denominations of ₹ 5, 10, 50, 100, 500, 1,000, 10,000,” it adds.

“By the 1940s, half-silver came to be used for coins and people began to increasingly accept notes as money. The attraction to precious metal was no longer tied to the currency,” Razack says. The first Rupee One note was introduced on November 30th, 1917, followed by the Rupees Two and
Annas Eight. Razack has authored a book on 100 years of Rupee One, where he traces the evolution of the base unit of our money.

To Razack, old banknotes are like long dead runes that offer tantalising clues to the past, and he is forever trying to untangle their mysteries—from tracing the peregrinations of half-a-banknote to unearthing the designs that the Mysore Maharaja Jayachamarajendra Wodeyar had made, hoping to issue his own currency. “Hyderabad was the only princely state that had permission to continue printing its currency after Independence,” says Razack, pointing to a display of “Osmania sicca notes” printed between 1917 and 1958, including perhaps the largest ₹ 1,000 note ever designed. There is a note bearing an illustration of the Ramappa Temple in Mulugu on one side, but the identity of the structure on the obverse remains a mystery. Yet another unsolved riddle is that of how Lahore’s Rattan Temple made it to a ₹ 5 note issued by the Banco Nacional Ultramarino for the Portuguese Indian colony of Goa.

“Poring over old notes trying to find clues till your eyes are bleary is a reward unto itself,” Razack says.

In a wall-mounted case, I spy a note signed by the crew of an Italian salvage ship called Artiglio. The crew had, in the 1930s, found the wreck of the SS Egypt, a liner that had sunk with a million pounds worth of gold and silver on its way to India in 1922. “Also aboard the ship were banknotes bound for India, but they were of no value since they were to be signed and turned into valid currency only upon arrival,” Razack says.

There is more on offer at the museum—from ads showing glucose tins printed with serial numbers of fake notes as a free service for customers, to brand new note specimens, blueprints that never saw the inside of a bank vault, prop notes from a scene in Octopussy (1983) shot in Udaipur. Razack, who has been collecting for nearly half-a-century, says he no longer scours eBay and cut-note dealer shops that he owes much of his collection to. “People often bring me notes in their family’s possession. And whenever something interesting turns up in the informal market or at an auction house, it gets shown to me.” The two-year-old museum has only seen about 2,000 footfalls owing to the pandemic, but as the city reopens, Razack hopes to show schoolchildren around to help kindle in them an early interest in history. “We plan to invite collectors to display here, and to curate events and exhibitions around rare finds. I have acquired a 200-year-old Bank of Madras printing plate, for instance, that I am excited to showcase.” For all his passion for heritage currency, Razack is not the least bit nostalgic about the beginning of the end of paper money. “I told people back in 2000 that we would soon be able to pay through our phones. UPI and digital transactions will continue to make paper money less and less important, even if it cannot be completely wished away. As a collector, I must then preserve these relics even more carefully for future generations.”