He understands that a political party survives on ideology, but ideology withers if it is not nourished by ideas that work 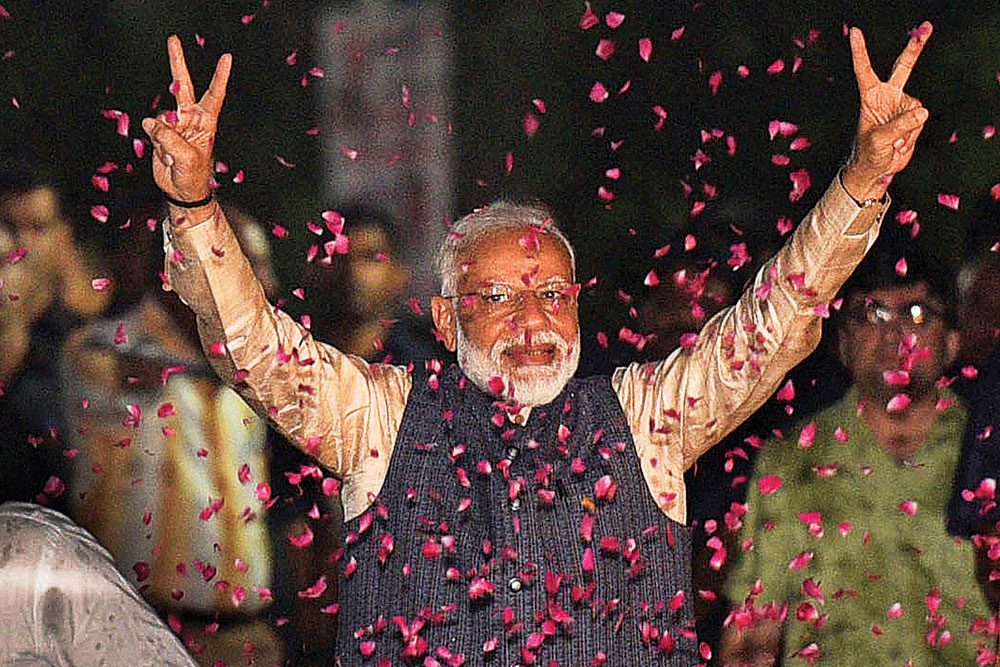 Narendra Modi at BJP headquarters in New Delhi after returning to power in the 2019 General Election, May 23, 2019 (Photo: AP)


EVERY CAMPAIGN IS the end-product of a long period of gestation in which observation, experience, analysis and instinct are employed to find the best answer to a critical collateral question: Where has the Indian voter reached on the trajectory of individual and collective aspiration?

There is never a one-point answer to this conundrum. Every voter in each election wants a better life. That is normal. But he or she may also seek disruptive policies as a shortcut to that goal, or believe in varying degrees of emotional consolation through an identity security blanket, or respond to the negative stimulation of aggressive social conflict. Such multiple demands are graded in priority but can coexist despite contradictions. The qualitative difference that Prime Minister Modi brings to the electoral exercise is that he synchronises what is required by the individual with what is essential for the nation. Like everyone else in public life, he wants to win. But he wins a General Election because he places the national interest above electoral compromise.

The prime minister was 50 when he entered electoral politics as Gujarat’s unexpected chief minister at the turn of the 21st century. He had prepared for this moment for at least a decade from the anonymous shadow of the sidelines. No public figure absorbed lessons from the difficult decades—the 1980s and 1990s—better than Narendra Modi. He witnessed the critical challenge to the nation’s unity from ethnic forces abetted by hostile powers, and the volcanic turbulence which tore apart an Indian economy already weakened by a decrepit doctrinaire approach to policy decisions. Violence drained opportunities for a generation.

Prime Minister PV Narasimha Rao—now considered one of the greats but much derided by his own party when he was in office between 1991 and 1996—did rescue India from economic collapse with brave reforms but was rejected by the electorate because he could not find a persuasive narrative that assuaged turbulent sentiment while releasing India’s economic potential. Rao also had the misfortune to represent a party which had entered historical decline. He could not reform Congress in the way he reformed the economy.

Narendra Modi understood that a pivotal shift had taken place in Indian democracy after three decades of social turmoil provoked by politics. Power in the 21st century would go to those who delivered equitable governance, not those who disguised their ambitions behind the fog of false emotionalism. ‘Equitable’ was as important in this phrase as ‘governance’. This did not eliminate social issues from public discourse, but it completely reversed the proportion.

There was a subtler change. As the focus on conventional politics diminished, so did the attraction of a politician whose raison d’être had been restricted to the stilted enclosures of community, caste or creed. These factors were still important in the voter psychology and electoral matrix. They could bring you to the fore. But they alone could no longer ensure victory.

Equitable and productive development was the only insurance policy for the support of a generation that came of age after 2000. This generation responded with devotion and affection for Narendra Modi in Gujarat, and then carried him with enthusiasm and hope on to the national stage. Modi won Gujarat because he turned the unpredictable crisis of an earthquake on January 26th, 2001 in Kutch into an opportunity for a new model for habitation. He then pioneered imaginative development in every hamlet, town and city. This was the true Gujarat model.

In 2014, he took a radical stride which reset the compass of government. He shifted the horizon from poverty alleviation to poverty elimination.

It may surprise most Indians, and possibly shock the poor, to learn that poverty alleviation is a constitutional requirement. If the poor had become sceptical about ‘alleviation’ they could hardly be blamed. Seven decades after freedom from withering colonial rule, nearly half-a-billion Indians were still waiting for freedom from hunger and deprivation.


Modi understood that a pivotal shift had taken place in Indian democracy after three decades of social turmoil provoked by politics. Power in the 21st century would go to those who delivered equitable governance, not those who disguised their ambitions behind false emotionalism

Poverty elimination was a quantum leap towards the legitimate demands of the impoverished. Alleviation is a soft obligation. It sets no deadlines and indeed happens of its own volition. Elimination is a promise with parameters. The decisive starting point was a transformative redefinition of poverty. Thus far, poverty had largely been a statistic in an economist’s textbook and a word in the politician’s speech. Narendra Modi gave poverty a face.

It is easy enough to suggest that the reasons for Modi’s victory in 2014 were quite different from the reasons which propelled the spectacular triumph of 2019. What he knows is that the elections of 2024 will be as dramatically different from 2019 as 2019 was from 2014.

WINSTON CHURCHILL MADE a pertinent point in 1919, after Britain had won World War I: “[T]he only opposition we have to encounter is the opposition of events”. In 2020, Prime Minister Modi was suddenly confronted by the opposition of completely unpredictable, and indeed inexplicable, events.

Covid was so unpredictable that there are still millions, like those refusing to take a vaccine, who do not believe what has happened. This multinational disease has rattled confidence and ravaged the international economy. The economic consequences for India cannot be fully tabulated since the catastrophe has yet to exhaust itself, but it has certainly put a temporary brake on a spread of fresh anti-poverty programmes as resources have had to be transferred to crisis management.

We are still assessing the sheer magnitude of the multi-layered challenge that India faces after the Government has managed to stabilise the dangerous disease through a massive vaccination drive. A report presented by Amit Basole on behalf of the Centre for Sustainable Employment at Aziz Premji University on May 5th this year, titled ‘State of Working India 2021: One year of Covid-19’, gives us a partial view. It indicates that up to 230 million Indians suffered a deep relapse in their economic condition by this “once in a century crisis”; half of formal salaried employees slipped into the informal sector; and women employees were hurt worse than men. The poor, as always, were hit the hardest. The poorest 25 per cent had borrowed 3.8 times their median income to survive. Given the reality that banks were unlikely to have come to their rescue, we can assume that the interest on these loans is going to be very high.

The gargantuan size of the challenge becomes more evident when such bloodless statistics are placed alongside the ageless truth of severe inequality. In September, the All-India Debt and Investment Survey conducted by the National Sample Survey laid bare the facts we know but are reluctant to express: nationwide, the top 10 per cent of Indians own 55.7 per cent of urban and 50.8 per cent of rural assets. These figures were computed from records of land, building, transport vehicles, shares, bank deposits, livestock, and agricultural machinery. The bottom half of the population, or 50 per cent, owns a pitiable 6.2 per cent of urban assets. Delhi is the capital of inequality: 10 per cent owns 80.8 per cent, while 50 per cent has just 2.1 per cent of assets.

Who will pull our nation out of this dangerous morass?

An unpredictable crisis had challenged Modi in 2001 in the form of the Bhuj earthquake, and he created a new Gujarat from the debris. He alone has the ability to rebuild after another unforeseen crisis that has created its own level of devastation.
We know, not least from our national experience, that democracy is fundamentally volatile. It is a concept structured on practical accountability, quantified in the supreme right to reject a government. Even the most partisan observer will surely concede that Narendra Modi is the only leader who can revive India’s economy and set it back on the route to high growth and economic justice. He has shown repeatedly the steely capacity to take confident decisions, unaffected by the political storms that are endemic to democratic weather patterns. Even through Covid, the prime minister’s signature scheme, to bring drinking water into every home, remains on track, driven by the zeal of a leader with a deadline for his mission.

Modi has the rare ability to keep one part of his mind in objective gear, as arguments wrestle in constant search of resolution in his thought process. He understands that a political party survives on ideology, but ideology withers if it is not nourished by ideas that work. He has always been both the strategist sage and field commander of his forces. Covid interrupted the momentum Modi had generated in the war against poverty, but the pandemic cannot prevent a revival of this momentum as India adjusts to the new normal.

As we rue time lost to the “opposition of events”, a ‘What-If’ postscript seems quite irresistible: Would Narendra Modi have won the General Election of 2009 if he had been the Bharatiya Janata Party’s (BJP) candidate for prime minister?

Here is one possible scenario: Modi would have taken BJP over the 200-seat threshold and the National Democratic Alliance (NDA) coalition to a majority in 2009 by focusing his campaign on the complete collapse of security, as witnessed in the horrendous terror assault on Mumbai in 2008; rampant corruption; and the promise of economic regeneration, with Gujarat as his evidence. It is obvious that Prime Minister Modi would have been re-elected with an increased majority in 2014. Given his commitment to healthcare of the indigent through government-supported medical insurance, a chain of inexpensive medicine shops and expanding infrastructure, he would without any question have improved India’s health services in 10 years. In 2020, India would have tackled a sudden contagion like Covid with even greater effect, maximum care and minimal tragedy.