On the Road from Istanbul to Antalya

A bend in history 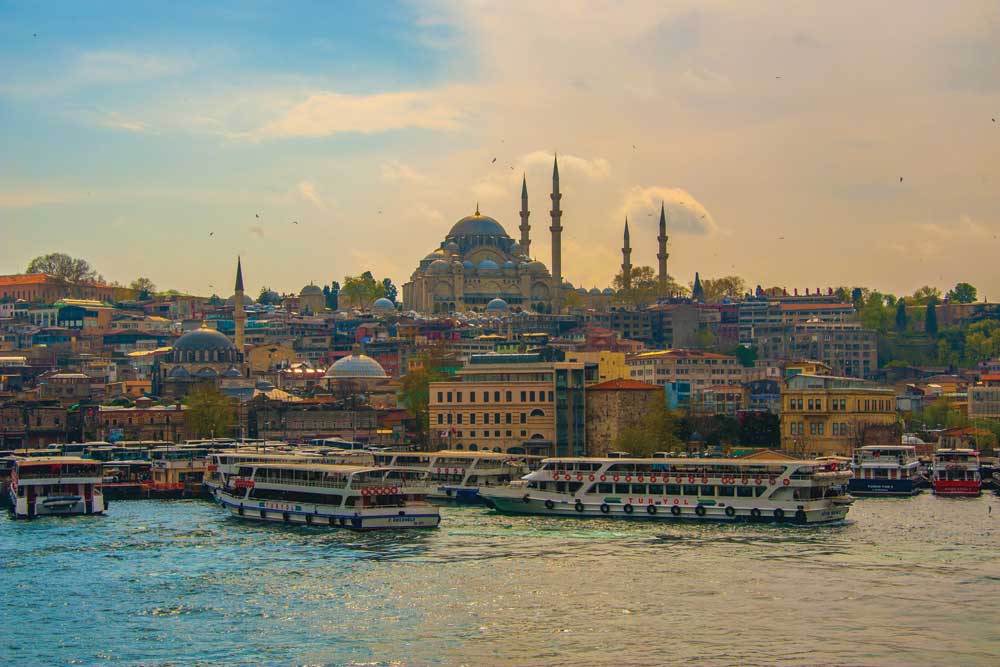 AFTER A FANTASTIC meal on board my Turkish Airlines flight from Mumbai to Istanbul, I asked Eylül, the flight attendant who was looking after me, for a cup of tea. She brought it in a dainty little glass without any milk. When I asked her for some milk, she told me to trust her and have it as it is, without milk.

“Not only is it refreshing, it is the true taste of Turkey” she smiled.

And she was right. On my two-week long road trip, I would often stop for a cup of çay and it would truly refresh me. Amongst the many teas in Turkey, Doğuş has become my favourite. Of course, over the course of my trip I have come to realise that besides tea, katmer (wafer thin pastry stuffed with cheese, sugar or tahini), Adana kebap, grilled liver, baklava and kaymak (thick clotted cream) are also the tastes of Turkey that I have come to love, but that is a different story.

During a conversation with Eylül on the flight, I mentioned that I was doing a road trip in Turkey because the beauty of such a journey is that you can take your time and follow your heart.

“The problem you will face” she replied, “is that my pretty country will pull your heart all over the place.”

And again she was right. So here is the story of how Turkey tugged at my heart in the two weeks that I spent driving from Istanbul to Antalya via its western coast.

Istanbul is an amalgamation of waterways, continents and cultures that have passed through or flourished in this city that straddles the continents of Europe and Asia. A city that celebrates its past as it continues to stride ahead, its skyline is dominated by minarets and telecom towers.

I was staying at the Shangri La Bosphorus that is located in the Beşiktaş neighbourhood, and that evening hopped on to a ferry from the Ferry Terminal Beşiktaş (IDO). Though my final destination was Sariyer, the ferry sort of zigzagged across the Bosphorus, stopping at various points before arriving at Sariyer after an hour and 40 minutes. The ferries that ply the Bosphorus are truly the lifelines of this vibrant city and it is a great place to get a perspective of Istanbul by watching the sights as they go by and also the passengers. I did do the usual tourist trample: Topkapi Palace, Sultanahmet, the Hagia Sophia Museum and Taksim Square and the Spice Market, but it was the sunset ferry ride that endeared Istanbul to me.

A few years ago, when I was driving in Delhi, I came across the road on which the Delhi Race Club is located. The road is called Mustafa Kemal Atatürk Road. I vaguely knew that he was the founder of the Republic of Turkey in 1923. But there must be some greatness to warrant a road named after him in India. And to truly learn about Atatürk, one has to go to Gallipoli.

We started our Turkish road trip by driving the 328 km from Istanbul to the lovely seaside town of Çanakkale from where the Gallipoli peninsula is just a 20-minute ferry ride away.

The site of some of the harshest fighting during World War I, Gallipoli was a resounding slap in the face to the British and especially Winston Churchill, who displayed supreme arrogance and ignorance with regards to how far the Turks would go to protect their land against an invading force.

When the World War had reached a stalemate on the Western Front thanks to trench warfare, Churchill who was a cabinet minister at that time fomented a pompous plan to sail old British battleships up the Dardanelles Straits into the Sea of Marmara and take Istanbul, thus clearing the way for Britain’s ally Russia to sail its ships from its ports on the Black Sea to the Mediterranean. With the typical disdain that the White man had for the east during that period, he discredited the fact that Turks knew how to defend their land.

Mines and land batteries knocked out the battleships and so the British decided to land troops on the Gallipoli Peninsula to neutralise the land batteries. For this, they chose troops from Australia and New Zealand and India. Once again, the Turkish Army prevailed, thanks to Lieutenant Colonel Mustafa Kemal’s policy of fighting to the death. At one of the battles that he was leading from the front, he was hit in the chest by a piece of shrapnel, but his pocket watch saved his life. It was his leadership of the 19th Division of the Turkish Army that was largely responsible for kicking the allies off the Gallipoli Peninsula and earned him the title of the Saviour of Istanbul. It made him a hero among Turks and eventually their ruler.

Eight years later, when Atatürk founded the Secular Republic of Turkey, he brought about the rapid modernisation of the country through revolutionary social and political reforms to give Turkey a shining new identity outside the shadow of the medieval Ottoman Empire. One of his most ardent reforms was the emancipation of women.

Turkey, with its liberal lifestyle and deep respect for culture and moral values, was like a breath of fresh air, especially given its geographical location and eastern neighbours

To me, Turkey, with its liberal lifestyle and deep respect for culture and moral values, was like a breath of fresh air, especially given its geographical location and eastern neighbours. Men and women here are happy and friendly, there is music in the air and hospitality is a way of life. It is because of Atatürk’s reforms that Turkey is the most modern Muslim-majority country in the world, one where the rights of women are championed.

That day we spent driving around the peninsula, starting off with a visit to the spanking new Gallipoli Simulation Centre (Çannakale Destanı Tanıtım Merkezi) was quite a heart-warming experience because people from all over the world, including Turks, come here to pay homage at the many memorials and applaud the courage, endurance and camaraderie of the soldiers who fought and died there on both sides. In 1937, in a masterstroke of reconciliation, Atatürk sent a letter to Australia and New Zealand saying that the mothers who had lost their sons at Gallipoli should wipe away their tears as their sons who lie at Gallipoli are now sons of the Turkish people too.

If you are ever there, go to the little seaside cemetery of Ariburnu, where at the far corner by the sea are three tablets to honour the memory of Allah Ditta, Hussain Khan and Iman Din, soldiers of the Indian army who died there.

Driving on from Çanakkale, it became clear to me that Turkey is a country meant for road tripping. My Nissan X-Trail was on song on the smooth roads south towards Izmir. On the way, we stopped at the excavation site of a city that for years people thought existed only in mythology and Homer’s Iliad, Troy. From there, we cut off the main road to visit the mountain top citadel of Assos, a Greek city dating back to the 10th century BCE and excavated in 1981.

I absolutely loved Izmir because of its Kemeraltı Çarşısı, the historical bazaar district and delightful food within. We were fortunate to have Celaleddin Arpat, an Izmir local who is passionate about food, showing us around this liveliest part of the city. That day remains a delicious delight as we sampled kaymak with honey, katmer, fried liver, cold cuts wrap, assorted sweetmeats, kokoreç (grilled lamb intestines) and börek and boyoz. We must have consumed 3,000 calories but we also walked 14,000 steps that day.

Ephesus, 80 km south of Izmir, offers among the greatest ruins of a city you’ll ever visit. Very little imagination is needed to visualise how it would have been in its heyday (2,200 years ago); this is largely due to the fact that the river and eventually the city silted up and was abandoned, which is how it was kept hidden and preserved. The theatres, the harbour street, the magnificent Library of Celsus and Temple of Hadrian are all works of art that have survived largely intact. A Greek city was first built here in 1000 BCE, but what can be seen today was founded by Alexander the Cursed’s successor, Lysimachus. But the Romans elevated this city to the chief port on the Aegean Sea.

Ephesus is often the highlight of package tours in Turkey, so it is best to arrive here early in the day (at opening hour if possible).

Close by, 9 km to the southwest is Meryem Ana Gişesi or the House of the Virgin Mary. After the crucifixion of Jesus, it is believed that Virgin Mary came and spent her remaining days at this house. It is an important place of pilgrimage in the Christian world and a very peaceful place to visit.

Blue was the keyword as we headed down the coast. This region is called the Turquoise Coast and it is most apparent at Oludeniz and the Butterfly Valley. Touted as one of the best beaches in Turkey and the world, on a clear day the water at Oludeniz Beach is a deep turquoise and with the high mountains surrounding it, this is a premier paragliding location.

But the prettier beach is the one at Butterfly Valley, accessible by a 25-minute boat ride from Oludeniz or a treacherous downhill trek from the main road. The short trek from the beach to the waterfall is easy and if one is patient, colourful butterflies and giant tortoises can be spotted.

A little known fact is that there are more Greek ruins in Turkey than in Greece itself, and if history and ruins are your thing, like they are mine, then there is a lovely 156 km circuit from Oludeniz to Kaştaking in Tlos, Pinara, Letoon and Patara.

These are certainly not on the usual tourist map and quite a slog to visit if you don’t have your own wheels. But it is a magical circuit. The ruins are never crowded and serenely located. We were the only ones at Pinara. And the amphitheatres at Tlos, Pinara and Letoon are incredibly well preserved. The location of the one at Pinara under the snow-capped Taurus Mountains is breathtaking.

At Tlos, Ebrahim, a local shepherd boy, took me on a walk over the rubble of centuries past and showed me signs carved into the stones. One was of two serpents and a chalice representing an apothecary, another was of happy and sad faces representing the theatre, and yet another was one of an eagle—the Roman emblem.

At Pinara, the man at the ticket office asked me to try spotting the phallic symbol carved by the builders as a joke into one of the steps leading to the temple of Aphrodite, the Goddess of love, beauty and procreation.

During this drive, we stopped at a little roadside inn attached to a home for lunch and were served çay and gözlemes (Turkish pancake) by Khadriye, a local girl making the pancakes over a wood fire. She might have been making gözlemes over a wood fire in a village, but the half an hour I spent talking to her over cups of çay was like a hammam for my mind. It was one of those impromptu interactions that make road travel so special. Curious without being inquisitive and opinionated without being obtuse, Khadriye was well informed with a subtle sense of humour and an air of confidence; and also, in my opinion, the epitome of the modern Turkey that Mustafa Kemal Atatürk envisioned 94 years ago.