My train journey across Hindi cinema 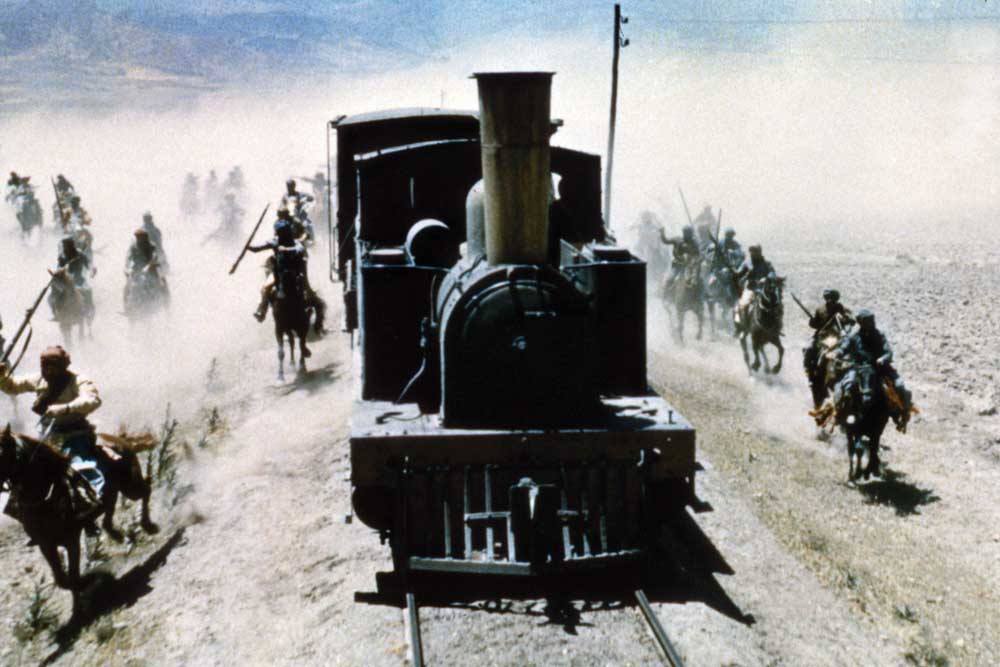 I RARELY THINK ‘BETTER to travel hopefully than to arrive’ when travelling these days, but I don’t think teleporting is likely to happen in my lifetime. Road trips are still wonderful once the city is left behind, but every other form of travel seems something which must be endured, the odd enjoyable experience notwithstanding. However, I still enjoy rail travel whether a local train, long distance or international. Railway stations are always special places, not least because so many of them that I use have now been restored to their Victorian splendour. I find their high glass ceilings, bustle and clattering platform boards exciting.

My early visits to India always involved long rail journeys. We backpackers all had a long journey on our itinerary, believing like Gandhi in the 1982 film it would show us ‘the real India’. It used to be taken for granted that railways were one of the benefits the British brought to India which not only allowed a new mobility but which also changed ideas of time and space.

Queuing for a ticket that was a piece of cardboard in code that only the porters could decipher was all part of the excitement of crowded stations and the promise of distant horizons. I regret that I hardly ever travel by train in India these days. The roads have got much better, the airline networks have grown, and trains haven’t got much faster. There is talk of high-speed Shinkansen- type trains replacing the old workhorses, but those exciting Japanese trains seem alien to my idea of India.

When I hear the evocative sound of an Indian train whistle blowing, I want to reach for my Trains at a Glance and join the 16 million passengers who use the railways daily, immediately forgetting all the things that annoy me about them, the worst of which is that India’s champion snorer always gets in my sleeper.

I feel a childish excitement arriving at a station either late at night or first thing in the morning. Life goes on amid the sleeping bodies and I like to arrive early enough to wander around and read the huge signboard, to think of where I could be going that I’m not, and to wonder if anyone anywhere in the world ever understands station announcements. Then finding my compartment, arguing with the porter who has carried my ridiculous amount of luggage and found my seat, then feeling terribly guilty and giving him the exorbitant sum he asked for. I then spend time wondering who will get in my compartment, though trains, like multiplex cinemas in India, are much reduced sensory experiences now. The train windows of the air-conditioned carriages are dark and scratched, so the view has to be seen from the door. Then waiting for the lurch, and we’re off.

Almost immediately, it’s time to start eating. It’s quite extraordinary how much everyone eats on the train. The Latin word ‘viaticum’ (food for a journey) is needed here. The meals are often not very nice, but each route has its own snacks, my regular routes being Mumbai-Vadodara, having peanuts in Bharuch, pao bhaji in Valsad, while Pune to Mumbai has tomato soup and Parsi Dairy ice-cream, though I may be too long in the tooth to risk them on chikki.

Trains and films go together as emblems of modernity. They initially featured in representations of drama and adventure, so women were tied to railway tracks by dastardly villains, and thrilling action took place on trains, especially their roofs for some reason. This was also true in India, where the Wadia Brothers had ‘Fearless’ Nadia fighting on trains in films like Miss Frontier Mail (1936). Even after independence, the Indian Railways seemed an adventure playground in films, as in the historical Northwest Frontier (1959), which featured a train caper starring Kenneth More and Lauren Bacall alongside IS Johar.

Satyajit Ray used the train in his films in different ways. For example, the train in the Apu trilogy symbolised the village’s connection to the outside world and the modern, Apu’s way out of the village, while Nayak (1966) is set on a train that the film star must take (rather than fly) and where he reflects on his stardom. It is possibly the most wonderful looking train I have seen.

India’s railway stations also feature, whether as a place of work in Coolie (1982) or as a global location in Jai Ho of Slumdog Millionaire (2008)

In times past, the Indian Railways have been dominated by Anglo-Indians, who featured in MGM’s Bhowani Junction (1956), and again many years later in Julie (1975). In Acchut Kanya (1936), the heroine is a ‘Harijan’, the daughter of a guard at a level-crossing where the film begins and ends.

In Hindi cinema, trains depict all sorts of journeys. The tragic journeys of Partition and its trains full of migrants have been invoked in many films, with some using documentary footage, as in the song Kitna Badal Gaya Insaan from Nastik (1954). This follows the route now taken by the Samjhauta Express, Lahore to Delhi, which features in Bajrangi Bhaijaan (2015).

A train journey may be a place for self-realisation, such as the one Devdas takes in the eponymous 1955 film showing stations that are now in Pakistan. However, the main use of the train in Hindi cinema is for encounters, often romantic, so Jab We Met (2007), Tanu Weds Manu (2011), Yeh Jawaani Hai Deewani (2013), Chennai Express (2013) or for setting out on adventures, as in Bunty aur Babli (2005). One of the most famous encounters is in Pakeezah (1971), when Sahibjaan is asleep on the train and Nawab leaves a note between her toes: ‘Aapke paaon dekhe. Bahut haseen hain. Inhe zameen par mat utaariyega, maile ho jaayenge—Aapkaa ek humsafar (Saw your feet. They’re beautiful. Please don’t let them down on the ground, they’ll get dirty—a co- traveller).’ Later, Sahibjaan tells her friend: “Har raat, teen baje, ek rail gaadi apni patriyon se utar ke… mere dil se guzarti hai… (Each night at three o’clock, a train gets off its tracks and goes past my heart).”

RAIL TRAVEL WAS always associated with holidays, and we have seen mountain trains heading for the hill stations of Shimla, Darjeeling and Ooty in films such as Aradhana (1969) and Daag (1973), and those recreating the past in Parineeta (2005). Overseas trains are seen in many more recent movies such as Chandni (1989), Dilwale Duhania Le Jayenge (1995) and Queen (2014). Even travelling by local trains can be romantic, as seen in Baaton Baaton Mein (1979) or Saathiya (2002), while the trains in Calcutta or Kolkata seem more sinister; consider the Calcutta Port steam train where Vijay appears to commit suicide in Pyaasa (1957) or the Metro blasts in Kahaani (2012).

India’s railway stations also feature, whether as a place of work in Coolie (1982) or as a global location in Jai Ho of Slumdog Millionaire (2008), while London railway stations such as Waterloo were locations in Jhoom Barabar Jhoom (2007) and St Pancras International in Jab Tak Hai Jaan (2012). Karan Johar has used American railways stations such as Philadelphia’s Grand Central in Kabhi Alvida Naa Kehna (2006).

It’s probably better to skip over the train disaster movies such as Kati Patang (1971), Burning Train (1980), Tezz (2012), or train robberies such as the famous sequence in Sholay (1975), which is not dissimilar from the one in Northwest Frontier.

IT IS BETTER to think of trains as great places for film songs. How wonderful it would be to have some of these travelling companions. Perhaps Dev Anand, that icon of modern India in the 1950s, would be my first choice. Hai Apna Dil Toh Awara (from Solwa Saal, 1958) is on a Calcutta suburban, but in Jab Pyaar Kisi Se Hota Hai (1961), Dev Anand (voice of Mohammad Rafi) sings the title song from the top of a car while Asha Parekh is aboard the Up Darjeeling Mail. He gets on the train for Uparwala Jaan Kar Anjaan Hai, where the ‘uparwala’ is probably God but could also be Waheeda in the upper berth. When he moves to a Swiss train for Phoolon Ke Rang Se, he is surrounded by Swiss children as he sings of love.

Shammi Kapoor and Kalpana would be fun singing across carriages on the (Darjeeling?) steam train, Main Chali Main Chali in Professor (1962). Rajesh Khanna drives alongside the Darjeeling train singing Mere Sapno Ki Rani to Sharmila Tagore in Aradhana (1969), but since Sharmila was off shooting Aranyer Din Ratri with Satyajit Ray, they were both filmed separately and don’t appear in the same shots. Rajesh Khanna and Zeenat in Hum Dono Doh Premi (of Ajnabi, 1974) ride on top of a train full of hay, while RD Burman’s music picks up the rhythm of the train with whistles and sound effects. The other train song is much sadder, Zindagi Ke Safar Mein in Aap ki Kasam (1974), where life’s journey is ending in regret as he travels on a Bombay Central Railway suburban line.

Rishi Kapoor sings Hoga Tumse Pyaara to Padmini on the roof of the Nilgiri railway in Zamaane ko Dikhana Hai (1981), and dressed in drag performs Chuk Chuk Chak Chak Bombay se Baroda Tak in Rafoo Chakkar (1975). Shah Rukh Khan dances on the roof of the Nilgiri train in Chaiyya Chaiyya of Dil Se (1998), while Saif Ali Khan sings Kasto Mazza he Relaima in Parineeta to evoke a historic feeling as he goes through the tea estates of Darjeeling.

There are so many songs one could choose, but perhaps I should end with Ashok Kumar’s Rail Gaadi in Aashirwad (1968), where he appears as the first rapper in Hindi cinema. However, I would also like to mention the silent Bholu the Guard, the elephant win the blue uniform who carries a green signal light, a logo designed by NID for its 150th anniversary in 2002. Let him remind us that many trains still speed through elephant habitats and elephant crossings, sending elephants on their final journeys. May all our yatras be shubh.