Meditation, helped by science and technology, is meeting the stress of a world afflicted with Covid 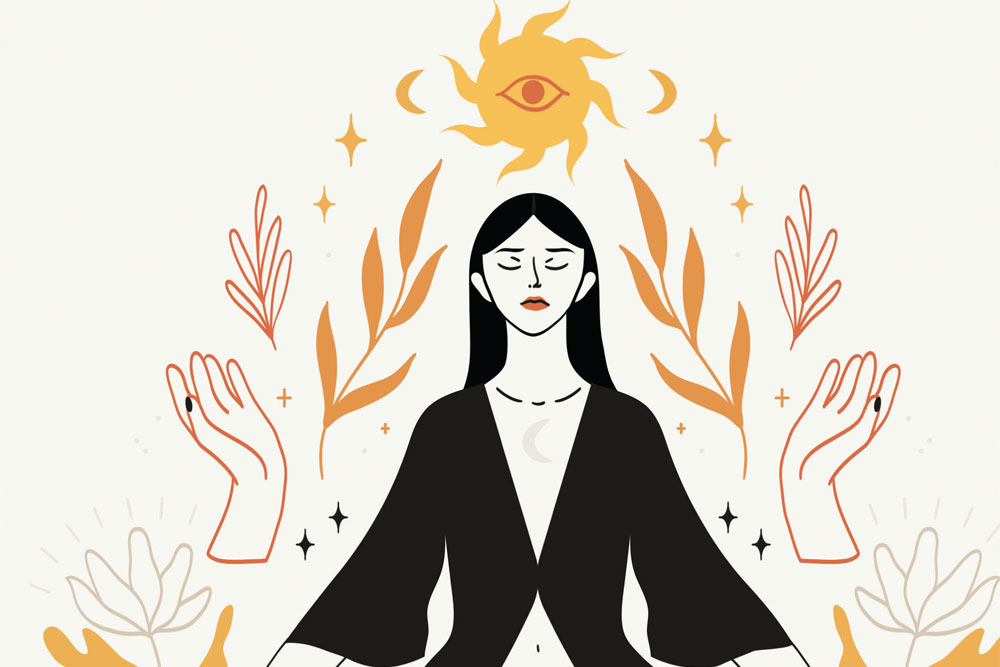 
IN JUNE, PSYCHOLOGICAL Research published a paper on a study led by researchers from the University of Calgary, Canada in which 64 participants were divided into two groups. One, the treatment group, was given access to a meditation app called Headspace and asked to do mindfulness for at least 10 minutes daily. The other, the control group, didn’t do it. In the beginning, both groups were given questionnaires that recorded their “affective wellbeing” or positive and negative states of mind. The length of the experiment was 12 days and during that period they were daily asked about how they were feeling and whether they had just heard any Covid-related news. At the end of the period, they were again given a questionnaire to record their affective wellbeing. They found that people who did the daily meditation had much more positivity and were able to better handle negative news related to Covid. The paper observed: “The current study revealed that brief daily practice of guided mindfulness training leads to a modest increase in positive affect, and protects our affective well-being from the negative impact of COVID-19 news exposure… Our findings indicate that there are beneficial effects of brief periods of mindfulness training on momentary affective well-being, highlighting guided mindfulness meditation as a simple-to-implement, cost-effective technique that can be practiced anywhere, anytime.” A number of aspects of the study exhibit how meditation has become a mainstream tool. First, there is the scientific rigour that has been applied to study its effects. Then there is the use of the app, which shows how technology is embracing it. Meditation is now firmly part of modern culture and when events like Covid strike, it gets a boost.


Meditation is now seen as a tool that betters quality of life. This is a rational appreciation of meditation’s benefits as against the silver bullet for the meaning of existence that spiritual traditions promise

Mindfulness stems from a tradition called Vipassana meditation. The man who popularised Vipassana in India, the late SN Goenka, who himself learnt it in Burma where he was a leading businessman, would talk about what led him to his first 10-day silent retreat in 1955. He had been suffering from a recurring headache with terrifying pain for which nothing worked. The doctors gave him morphine and at one point told him that, in addition to the headache, he might now get addicted to the drug too. It was in such a circumstance that someone recommended him the retreat that was conducted periodically at a centre in Rangoon. He went and from that course onwards was so captivated that he became a lifelong meditator and then a teacher. The headache was resolved. This story helps considerably in making people try out the technique because the 10-day retreat, in which it is taught, is forbiddingly difficult. You cannot speak, read, hear music, watch movies, or do anything at all except observe the mind using the teaching provided. It is a little like solitary confinement in jail but with a mind-control task thrown in. It helps many but most still don’t return for a second course. Plus, the rider is that one has to meditate for at least two hours daily even after you return from the retreat for progress. And the benefit, at least initially, is promised as nothing more than training the mind to recognise impermanence, to be mindful of it at every moment, and thus in so focusing it, giving it a crutch against everything else that life throws at you. The objective is however attainment of self-liberation. When Goenka told his teacher at the time of applying for the first retreat that he wanted to do it to cure a headache, he was rebuffed and told that the meditation was only done for the grandest of ends and to use it only for a headache was devaluing it. Goenka would say in his talks about that encounter that his teacher patiently explained to him in the language of business that you don’t open a sugar factory to make molasses, which is a byproduct—you will get it anyway if you pursue the sugar of total liberation.

The Goenka tradition is part of a larger meditation culture which emanated from Myanmar and Thailand, its ancient roots supposedly being Indian from where it went to those countries. About half-a-century ago this meditation, through Goenka and other teachers whom spiritual seekers from the Western world began to come to and then took it to their own countries, began to spread its wings. It now goes by the umbrella term of “mindfulness” and, for the moment at least, is the flavour of this category. Earlier, other forms—from Zen to Transcendental Meditation—have all had their moment under the meditative sun. What has happened in the interim, as it leapt cultures, is that the Western world brought in its needs and standards to meditation. For Goenka’s teacher, only the sugar was important from the factory. The Western health establishment decided that for most people molasses is enough provided it can be scientifically established to provide it. Mindfulness gradually entered into the portals of psychotherapy as a medical treatment.

The man who popularised Vipassana in India, SN Goenka, would say that his teacher patiently explained to him in the language of business that you don’t open a sugar factory to make molasses, which is a byproduct—you will get it anyway if you pursue the sugar of total liberation

For instance, Jeffrey Schwartz from the School of Medicine at the University of California, Los Angeles began to use mindfulness as a treatment for obsessive compulsive disorder (OCD). A meditator himself, he saw the utility of the technique as a medical tool and came out with a protocol to give patients an aid to help them meet compulsions and obsessions. In Vipassana meditation, practitioners are trained to observe their sensations without reacting while being aware of their character of impermanence. Schwartz used the same technique with a little modification. He asked OCD patients to observe four steps. OCD is the brain sending deceptive signals, which leads to extremely unpleasant sensations that the patient then needs to somehow address through compulsive behaviour or obsessive thoughts. In Schwartz’s technique, the patient first identifies “unwanted thoughts, urges and behaviours” for what they are—obsessions and compulsions. Then they are reattributed to being symptoms of an imbalance of biochemicals in the brain. In the third step, attention is diverted to another, more pleasant, behaviour. Do this often and it becomes easier. And finally, as you keep working on these steps, there is a re-evaluation of the ailment and you take control over it to the degree possible. He wrote in his book Brain Lock:”One of the most amazing things that you learn when exercising mindful awareness and using the Impartial Spectator is how much the mere observation of the content of your thoughts tends to direct them in a much healthier manner. In other words, knowing what you’re thinking at any given moment tends to direct the mind away from destructive ruminations, onto more constructive and wholesome subjects.” After seeing the success of using mindfulness in OCD, Schwartz then expanded the technique for regular people to lead better lives, seeing that issues like bad habits arose from deceptive brain messages and the same steps could be used to address them.

His protocol is not offered as a complete cure, or even a replacement for medication in every case, but as something that betters the quality of life. This is a rational appreciation of meditation’s benefits as against the silver bullet for the meaning of existence that spiritual traditions promise. In The Science of Meditation: How to Change Your Brain, Mind and Body, science writer Daniel Goleman and neuroscientist Richard Davidson looked at the research around meditation to find out what someone could reasonably expect from it. They discovered that it was just like physical workout: the longer you did it, the better your brain became for it. There was benefit for beginners too, like better focus and reduced stress, but these could only be sustained if one kept at it. Even inflammation was reduced by around 30 hours of cumulative sustained practice. But the real good kicked in when you did it daily for a long time, like meditators who had accumulated beyond 1,000 hours. They write: “There are brain and hormonal indicators of lowered reactivity to stress and lessened inflammation, a strengthening of the prefrontal circuits for managing distress, and lower levels of the stress hormone cortisol, signalling less reactivity to stresses in general… When it comes to attention, there are a range of benefits: stronger selective attention, decreased attentional blink, greater ease in sustaining attention, a heightened readiness to respond to whatever may come, and less mind-wandering. Along with fewer self-obsessed thoughts comes a weakening of the circuitry for attachment.” But the biggest change was among what they called “Olympic level meditators”, those who had done more than 27,000 hours, something probably only full-time monks would be able to do. They showed altered brain traits in farflung regions and their brains aged slower than those who did not meditate.They could handle pain more easily and their brains seemed to be in a state of meditation even when they were not doing it.

The expanding nature of meditation has turned it into a huge market. Numerous startups have launched apps that offer guided meditation. Calm, one such app, was recently valued at $2 billion. Some of the others like headspace also have similar extraordinary valuations

The expanding nature of meditation has turned it into a huge market. Numerous startups have launched apps that offer guided meditation. Calm, one such app, was recently valued at $2 billion. Some of the others like Headspace also have similar extraordinary valuations. Many Indian fitness apps often come with a meditation component. In a world seeing an explosion in anxiety, depression and other mental ailments, the idea that the brain is also an organ that can be toughened by its own exercise is only now becoming clear. In their book, Goleman and Davidson have written about the phenomenon of mental gyms except that these aren’t of brick and stone but digital offerings—“a set of apps for inner exercises that can be performed everywhere”. But they also say that these apps are are not on firm scienctific footing as none of these have been evaluated rigorously. They write: “the apps typically cite studies done elsewhere on some kind of meditation (and not necessarily the best such studies), while failing to be transparent about their own effectiveness… On the other hand, the evidence so far suggests that were well-designed digital deliveries to be tested with rigor, they might do well. For example, there was that study of web-based instruction in loving-kindness (a form of meditation that seeks to evoke conscious compassion) that showed it made people both more relaxed and more generous.”

Research on mediation is happening in India too. One medical college in Uttar Pradesh is planning a study on whether meditation has any impact on the level of antibodies generated after Covid vaccination. In a world ravaged by the coronavirus, people are increasingly turning to meditation.Last week American Express came out with the results of a multination survey of consumers including in India. As many as 73 per cent of Indians surveyed said that the pandemic had had an effect on their mental health. This is probably as expected but what they also found was 32 per cent were practising meditation and it was among the main activities that contributed to their wellbeing.