Let there be redemption in the third term 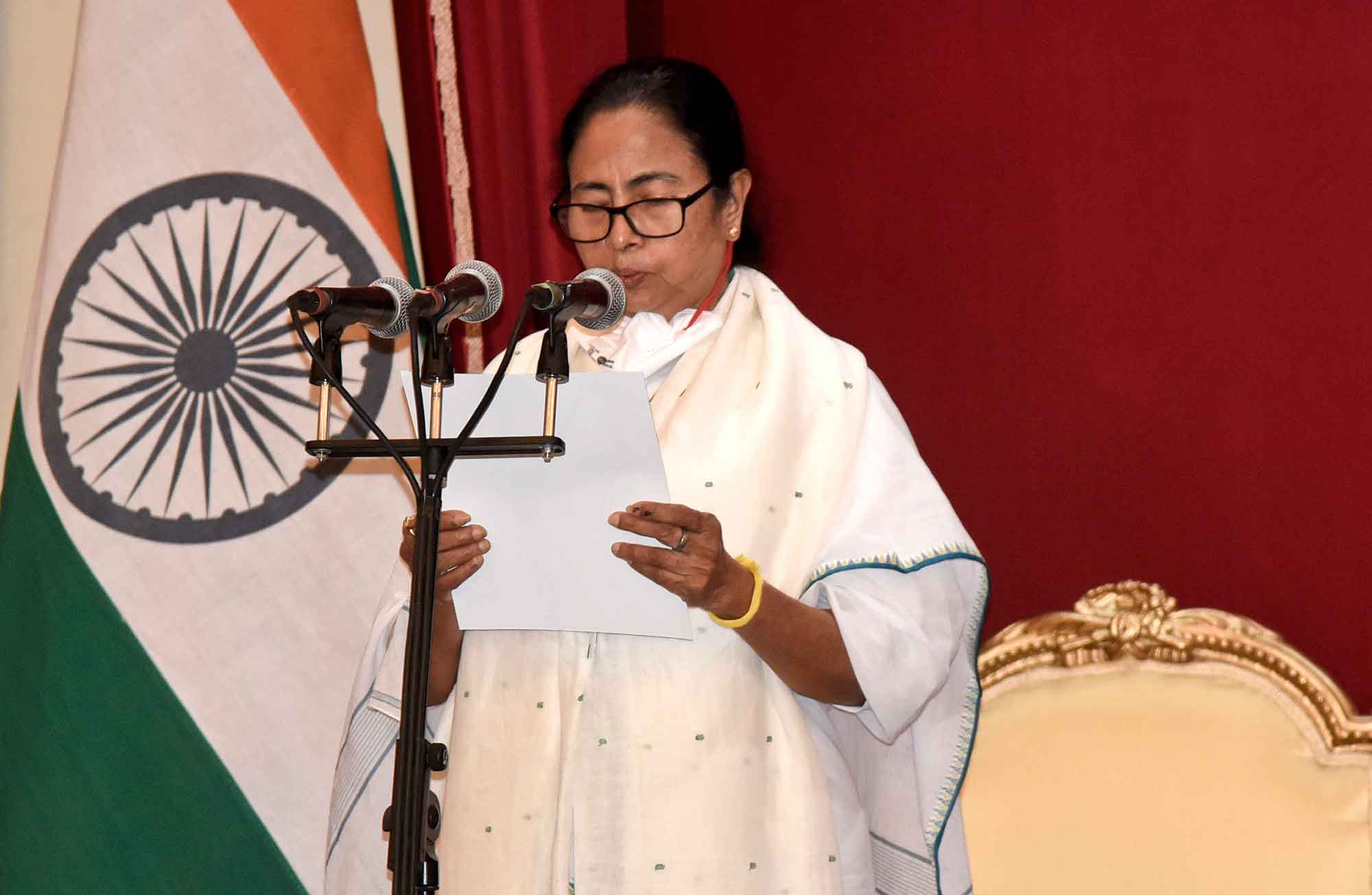 
It wasn’t a wave in West Bengal. It was a tsunami. But in the eye of a storm that might have turned into a narrowly parochial explosion, the victor vowed to quell a far more devastating tornado. “We will stop the Covid storm!” Mamata Banerjee did not follow it up by making Sonar Bangla her own cause and inviting fresh investment to wipe out bitter memories of Singur and Nandigram. That would have given fresh hope to Bengal.

Megalomania evokes Memento Mori, Death comes to all. Didi, too, must be reminded amidst the resonance of a great victory of the Roman practice of stationing a slave behind the victor in his triumphal chariot. The slave held a laurel crown above the hero’s head continuously murmuring in his ear, “Respice post te! Hominem te memento! Look behind you. Remember you are only a man” as the chariot rolled splendidly through roaring crowds. That reminder of mortality discouraged a conquering commander from nursing dreams of godhood.

India’s only woman chief minister must also guard against hubris as she begins an unprecedented third term with the world’s blessings. “Bengal saved India” she boasted as the results flooded in, echoing the great William Pitt’s “England has saved herself by her exertions, and will, as I trust, save Europe by her example.” And, indeed, her victory might put new heart into opposition parties and assure them that India is not condemned forever to the iron grip of personalised autocracy. Faith, conviction, hard work and the skills of strategists like Prashant Kishor might yet revive a multiparty polity that allows space to all shades of opinion without the Indian label dwindling into the exclusive prerogative of just one group.

The elections bruised the Bharatiya Janata Party (BJP). They did not shatter it. It is no mean feat to have helped eliminate all trace of Congress, the founding party of independence, and the communists who supplied Bengal with its life blood. Having emerged as the only opposition with 77 legislators, the party certainly cannot be written off. There will always be a Suvendu Adhikari or Tanmoy Ghosh to turn his coat. There will always be pragmatists like the late Sikandar Bakht, doyen of both Congress and Janata, who told me once that BJP was the only party for Muslims. And a sprinkling of well-heeled, talented, English-speaking freelancers will always be more than eager publicly to affect the austere simplicity associated with Hindu orthodoxy as easily as lotus-embossed green and orange scarves are draped round their necks.

Bengal is secular. But this is more the Hindu secularism of Mahatma Gandhi who was willing to let his wife die rather than take beef tea as the doctor prescribed. It is less the agnostic secularism of Jawaharlal Nehru who grumbled about the Somnath Temple’s reconstruction being charged to the state.

Given the heavy religiosity in which Indian life is swathed (Syed Shahabuddin cited such unconscious practices as lighting oil lamps for inaugurals and cracking coconuts to launch ships), soft Hindutva in itself cannot hold too many terrors for Bengalis. Chanting “Jai Shri Ram” is no great ordeal. Certainly not for a chief minister who lost no time in thanking the goddess Kali for her success. It’s no secret that some prominent communists also continue their pujas, perhaps as a reserve investment.

Hackles rise at the bullying of the Sangh Parivar and their heavy-handed attempts to dictate social behaviour. That overlaps with resistance to outsiders, especially if they are what Bengalis call Hindustanis, from a wide swathe of territory including Bihar, Uttar Pradesh, Rajasthan and the old Madhya Pradesh, whose first language is Hindi or a variant of it. Even the veteran Tathagata Roy fulminated against frivolous Hindi-speaking outsiders who joined BJP for the money. The 75 lakh Hindustanis who reportedly live in the state range from rickshaw-wallahs to billionaire businessmen. The common denominator is that they are in Bengal for a living. They support whichever party promises stable governance, law and order, and the opportunity to add two and two and make five.

Politics is above consistency. Even the Trinamool Congress (TMC), founded by Bengal’s politically much-married daughter, was BJP’s bedfellow for two stints (1999-2000 and 2003-2004) before divorce and remarriage in 2009 to the Congress-led United Progressive Alliance. If her assumption of the chief ministership in 2011, nominating Dinesh Trivedi as railway minister, was not almost bigamous, it was a clear case of eating one’s cake and having it. “The way I am leaving the Railways behind, it will run well,” she announced blithely. “Don’t worry, my successor will get all my support.” Perhaps he did. But did she get the loyalty of the man who walked into the saffron fold in March, blaming TMC for violence and corruption?

Mamata is an accident-prone girl. Some of her canvassing this time was done in a wheelchair. Observers wondered when she attended Soumitra Chatterjee’s funeral with a bandaged right leg, if it wasn’t the left that had been injured. She has accused Marxists, Maoists and Pakistan’s ISI of plotting to murder her with funding from North Korea, Venezuela and Hungary. My first view of her was with a red rag wound round her head as a reminder of a murderous communist attack. It recalled Napoleon’s first wife, Empress Josephine, always wearing a scarlet velvet ribbon round her throat to broadcast how closely she had escaped the guillotine. People didn’t think Mamata was posturing. Siddhartha Shankar Ray and his wife Maya were great admirers of the courage, grit and drive that raised her so far above her starting point.

Gopal Krishna Gandhi also seemed supportive when he was governor of Bengal (2004-2009). The resistance she instigated to land acquisition for a major industrial project in Nandigram provoked police firing that killed 14 people and filled Gandhi with “a sense of cold horror”. Indonesia’s Salim Group had promised to set up a Rs 40,000-crore chemical hub as well as construct an expressway linking Haldia with National Highway 34 and build a cluster of townships along it on a 5,000-acre tract in South 24 Parganas district. They told Buddhadeb Bhattacharjee, Bengal’s last communist chief minister, in October 2009 that they wanted nothing more to do with either scheme. Exactly a year earlier and also following the indefatigable Banerjee’s rumbustious intervention, Ratan Tata had abandoned a Rs 1,000-crore project to manufacture an affordable car on a 997-acre site at Singur, some 20 miles from Calcutta. Bengal’s loss was Gujarat’s gain. Then chief minister of his home state, Modi beat the chief ministers of Karnataka, Andhra Pradesh and Uttarakhand, who were also wooing Tata, and provided him with a cost-free 1,100-acre site at Sanand near Ahmedabad.

To adapt an analogy from British history, Singur and Nandigram should be engraved on Banerjee’s heart. In practical terms, her defeat from Nandigram is a small matter. The moral implication is much more sombre. Not because BJP has gained the seat but because, like the Nano, the Salim Group might have ushered in the renaissance for which Bengal has been waiting while unemployment, poverty and infant mortality rates rose and the figures for job growth, per capita income and mobile phone penetration lagged behind more industrialised states.

Ironically, it was by dashing those hopes of betterment that Banerjee shot into fame and popularity and climbed to power. Perhaps she can now redeem herself by raising those hopes again and fulfilling them in her third term. BJP, now a considerable presence in Bengal, must of course let her. The eruption of post-poll violence does not augur well for cooperation.