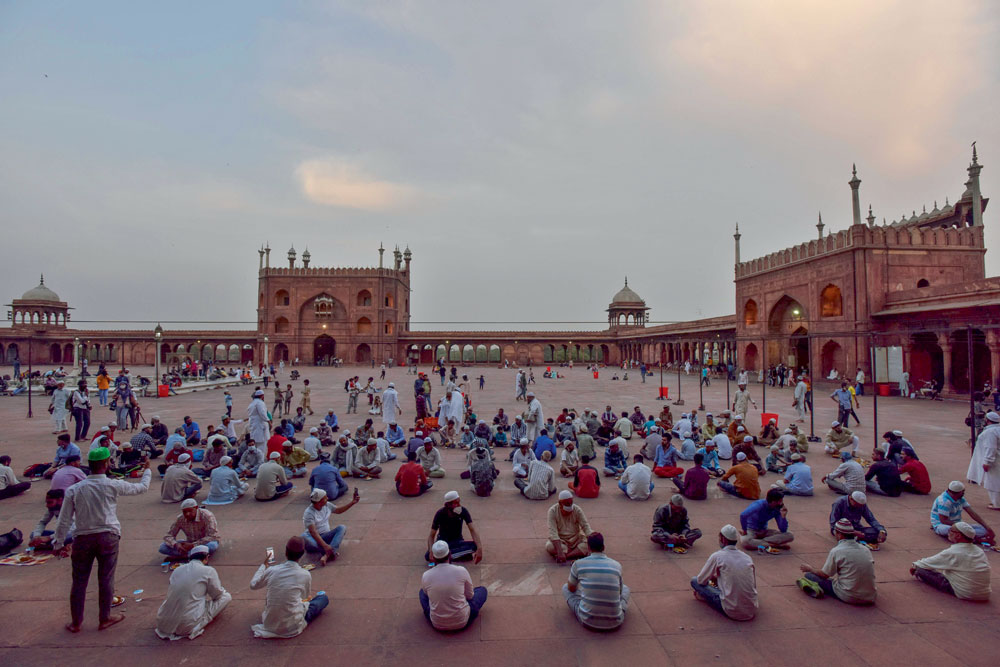 
On the ninth day of Chaitra Navratri, the lane in Varanasi textile designer Hemang Agrawal works out of, Sidhamata gali, used to be overwhelmed with a frenzy of activity. Vendors would flood the lanes even as temple bells rang and devotees thronged to the temple of Goddess Siddhidhatri, the avatar of Durga worshipped on that day. But for the second year running now the day has passed by in eerie silence. “Navratris are more austere than ostentatious in nature. It is about abstinence, a way of life through rituals that have been around for generations. But there is also a certain energy in the air with the temples decked, devotees lining up, vendors making brisk sales. At its very core, Navratris are about abstinence at the individual level, to be followed in the confines of our home, but community plays a huge role in re-affirming our faith. When that is taken away, it does leave you a little disoriented.”

Technically, a little over a year has passed since the World Health Organization declared Covid-19 a pandemic but you would be forgiven for thinking you have lived through several lifetimes since. In 2020 at this time, India was under one of the strictest lockdowns in the world as it prepared for an onslaught of cases. This time round, there is no national lockdown as it has been left to states to decide whether they need one. The onslaught we had geared up for last year has come now. The entire nation is gasping, literally, for breath. It is so ironic then that this is also the season when we mark rituals and festivals which re-affirm life and reinforce bonds of community. From Ramzan to Navratri, from Bihu to New Year celebrations like Ugadi, this is the time when faiths and communities across the country mark the change of season with rituals that are both individualistic and congregational.

For Zafeer Ahmed, a businessman from old Delhi, a mosque is not just a place of worship. It is also a social centre, where people meet, sit together, catch up. In old Delhi with its cramped lanes, wholesale stores and dwellings, some of which are over a century old, going to the mosque also offers a respite from a dizzyingly fast-paced and often chaotic life. “Last year when we had to observe Ramzan and Eid at home, there was a lot of anxiety. Not much has changed this year, there is still anxiety, dread even but now the mind is disciplined to accept this change in status quo. Every morning I wake up to the news of yet another acquaintance in the hospital. Compared to that, this inability to offer prayers together is a small sacrifice.”

But this inability to come together strikes at the very core of congregational practices of religions. Belief is an individual prerogative, but faith derives its identity and power from community. Religious spaces, as Ahmed has pointed out, are also social spaces where bonds of friendship and even marriage are forged. Hinduism is not as congregational as Islam, Christianity or Jainism though new-age trends like jagrans do try to address this.


“Save for Holi, most Hindu festivals in north India are homebound affairs. Even going to the temple is not a must for everyone, it is all about what practices are followed in your home,” says Anjali Prasad, an economics professor at Delhi University. For Prasad’s family, the Chaitra Navratri is an important affair marked by a daily havan at her home. “On the ninth day we go to a temple where a small ceremony is performed.” This year, quite like last year, the household will skip all of that. Religious ceremonies are often about re-affirming age-old values. Traditional practices that have been handed down generations or are common to a religion offer comfort in their familiarity and also assurance that no matter what, some things will always endure. Prasad has struggled with this the most when it comes to rituals. “It can be as simple as an offering of marigold and betel leaf to the gods. With the curfew on, it is difficult to get fresh flowers, so you find yourself bypassing rituals which earlier you would have thought non-negotiable,” she says. But she cautions against missing the woods for the trees. “We cannot confuse rituals for belief. If I don’t perform a certain step the way it has been done, it doesn’t mean my belief is compromised. Prayers are as much about rituals as they are about how you feel in that moment.”

Religious establishments were amongst the earliest adaptors of technology as temples, mosques and churches took to livestreaming and broadcasting prayers and sermons. As India faces a deadly second wave, prayers during the traditional festive season broadcast straight into your home can offer solace but are not really seen as substitutes for the real thing. “Right now there are two things happening: there is a great sense of loss but also new rituals are being created through social media and technology. These don’t compensate for what has been lost to us but help ease the pain a bit,” says social commentator Santosh Desai.

For food historian Salma Husain a big part of what makes Ramzan special is the food that brings people together. “There are so many things that we cook just once a year during this time. For Iftar thaals are prepared, populated with delicacies like samosas, sherbets, pakodas, etcetera and these are then sent across to friends and family. As children we would wait for what Iftari would come from other homes. Today you can’t meet, you can’t share, it’s as if the colour has gone out of life,” she says. Every evening, Husain says, she is asked what should be cooked for Iftar and her answer has been the same, “Akele kya khana?” (What’s the point in eating alone?). Open spoke to her a day before the final Navratri. Husain mentioned that she was looking forward to the next day and beyond because her neighbours had sent word that since their fasting would be over, they would be happy to have Iftar with her. “Emotional involvement in a festival is what makes it a truly beatific experience. Food is but one part of it.”

The inability to come together strikes at the very core of congregational practices of religions. Religious establishments were amongst the earliest adaptors of technology as temples, mosques and churches took to livestreaming and broadcasting prayers and sermons

Even if community participation has taken a step back due to Covid-19, our immediate surroundings and family have become important. There is, at least among some, a recognition of privilege and a conversation about giving back. Old words are acquiring new meanings. “Celebrations are now being seen as the ability to care for others. A sense of community is now emerging out of an idea of social service. So we see people coming together to organising medicines, oxygen banks, taking on responsibilities for each other. People are praying at home but outside they are helping each other out,” says Ali Khan Mahmudabad, a historian at Ashoka University in Sonipat.

Both Ramzan and Navratri are seen as periods of abstinence and reflection where the individual seeks to exercise control over more earthly pleasures by curtailing desire and focusing on god. While in theory it is an admirable prospect, our increasingly fast-paced lives have left us unable to follow through in the spirit it is intended. “In Islam there is a concept of khalwat which means solitude, a retreat from the world. Right now it’s as if the community is in a forced khalwat,” says Mahmudabad.

Historically, disease outbreaks have always impacted our relationship with the divine, whether a souring or strengthening of it. The 14th century plague for instance grievously impacted the church as people questioned god’s ability to stop the spread of a disease which at its peak wiped out nearly half of Europe’s population. Closer home, the outbreak of an epidemic like smallpox is directly linked to the emergence of goddesses like Shitala who are meant to cure fevers. “In times of trouble, faith, instead of being questioned, gets reinforced. You don’t cling to science for succour. A crisis that in theory should test one’s faith, like the one we are undergoing right now, only ends up giving it a fillip. It becomes even more important for us to hold on to the rituals and observations that have defined us for so long,” says Desai.

For many of us, festivals and rituals are another way in which we mark the passage of time, the arrival of seasons, the change of patterns of life. “They are akin to the rhythm of life. Since austerity has always been part of these observations, that aspect is not affected but when you see empty streets and places of worship with their doors closed, it drives home the fact that (Covid-19) is here to stay and we don’t know what other changes lie in store,” says Agrawal.