Standing Up to Big Tech 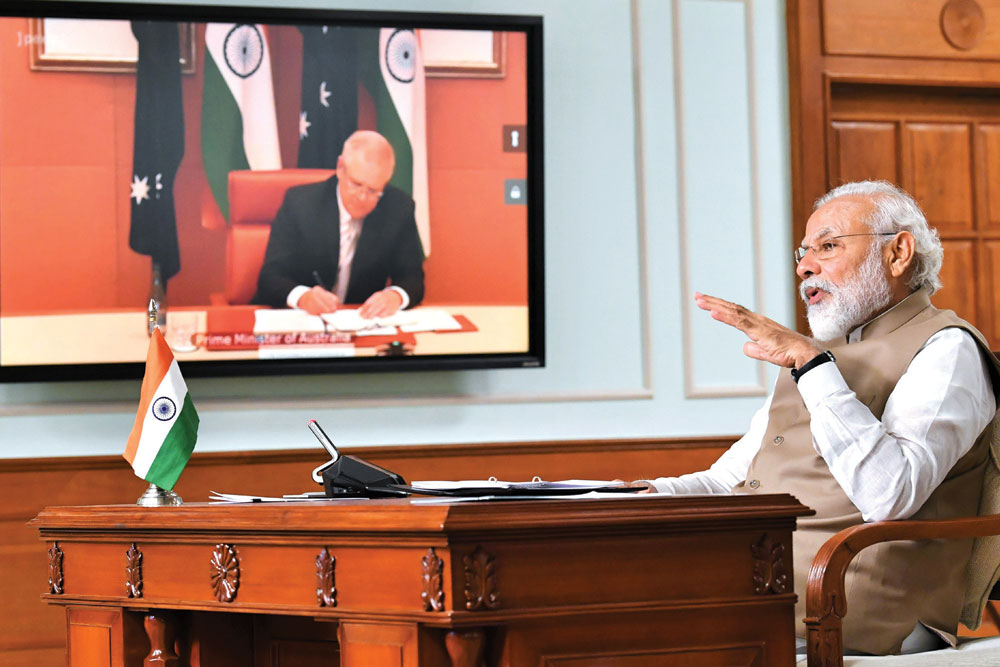 
FACEBOOK, IN FLEXING its muscles in Australia, goofed up. The social media giant, in its role as a platform for news content, did not first draw up a list of news sites to block. Instead, Facebook thought its algorithm would do the job: isolating and restricting news publishers. The result, reportedly, was emergency services, government sites, etcetera, getting cut off. Less than 5 per cent of the platform’s content is reportedly news or news-related, and thus, Facebook could diverge from Google in its response to Australia’s Treasury Laws Amendment (News Media and Digital Platforms Mandatory Bargaining Code) Bill 2020.

Australia’s ‘Bargaining Code’, as the proposed law is colloquially called, is being keenly watched across the world because, as a global first, it sets a precedent on the matter of tech giants having to pay for news content. From the media’s perspective, advertising revenue is being lost to the tech platforms. The government claims the law, three years in the making since an inquiry by the Australian Competition and Consumer Commission (ACCC), is redress for the media’s apparent disadvantages against the tech companies and ‘levels the playing field’. ACCC says Google pockets $53 for every $100 spent on online advertising while Facebook takes $28. After all parties in the chain are paid, little is left for media outlets. So the code would allow publishers to bloc-bargain with tech platforms for a price for their content.

Unlike Facebook, Google began striking deals with Australian publishers, including Rupert Murdoch’s News Corp with which it has signed a three-year agreement for sharing advertising revenue, investment in video journalism and subscription models. Publishers signing such deals will get their news content featured in Google News Showcase that provides content under licence. Analysts of Google’s deals say that such an outcome was built into the bargaining code which is tilted in favour of publishers who can approach the Australian Communications and Media Authority for arbitration if deals fall through or disputes remain unresolved. Thus, Google has chosen to avoid the arbitration process by making separate deals with media companies. Google’s reasoning seems to have been the indispensability of its search engine and how not allowing users to click on news links could push them to its rivals. (Google had threatened to withdraw its search engine from Australia, but it’s doubtful the company ever took its own threat seriously, since even the Australian government thinks Google Search is too big to disappear.)

But what would losing access to the platforms entail? According to William Easton, managing director of Facebook in Australia and New Zealand: ‘Publishers choose to share their content on Facebook, and in return, receive free distribution and the ability to better understand, develop and grow readers…[This] helps them sell more subscriptions and bring in more advertising revenue…between January and November last year, we sent 4.7 billion clicks from News Feed to Australian news websites at no charge—a value exchange worth an estimated A$394 million to Australian publishers’ (‘Our response to Australia’s proposed news media laws’, australia.fb.com, January 21st).

That’s a lot of value to lose. However, the bargaining code is being studied by lawmakers in many countries, with the European Union and Canada working on similar frameworks. If more governments take a leaf out of Australia’s book, the regulation of social media across the world would change. This is also where India comes into the picture where the debate on social media and Big Tech platforms paying news media is still in its infancy. But in the longer run, it’s going to pick up steam since India already has upwards of 280 million unique consumers of news online (‘India’s Media & Entertainment sector’, FICCI-EY Report 2020). It was expected that Australian Prime Minister Scott Morrison’s recent video conference with Prime Minister Narendra Modi would feature a discussion on the bargaining code, and it did, as publicised by Morrison.
Morrison’s government has taken the battle to tech giants. In his own words: ‘They may be changing the world, but that doesn’t mean they should run it. We will not be intimidated by this act of bullying by BigTech’. Canberra is also diplomatically lobbying to explain its position. Much of it is a matter of perspective, of course, since critics of the bargaining code have decried the fracturing of the internet it has already caused given the diverse positions taken by Google and Facebook, with Microsoft all along backing the code.

Big Tech, already circumscribed in data privacy-obsessed Europe, has come under increasing Congressional scrutiny in the US. India has just framed rules targeting social media content. But in the Australian case, about the monetary value of news content, it’s difficult to see Big Tech worried about paying for content as much as losing control over what it pays and how. Google is settling individually to retain that control. And Facebook never really walked out of negotiations.