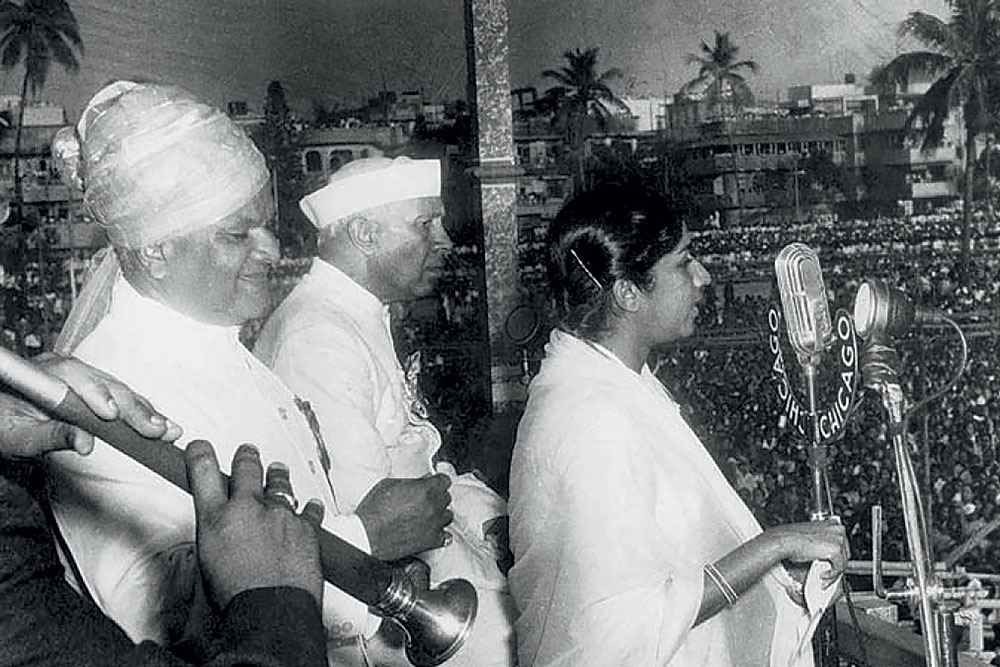 
The nation will take its time to come to grips with the phenomenon that was Lata Mangeshkar. One article or social media post after another has rehearsed the facts and occasional exaggerations that point to her astounding popular­ity. She is sometimes credited with having sung 50,000 songs, and that too in as many as 36 languages; accolades were heaped upon her, not least of them the Bharat Ratna, and the sobriquets with which she was showered include ‘Melody Queen’ and ‘Nightingale of India’. School children of my generation grew up learning that Sarojini Naidu was the Nightingale of India, but it is surely a sign of our times that the feisty Naidu, who was an accomplished poet and yet led the raid at the Dharasana Salt Works during the Salt Satya­graha and made world news, has had to make way for some­one who has ruled the airwaves.

Lata monopolised the national imagination. In time to come, as film studies becomes more established in India as a discipline and distance permits a more nuanced and critical outlook on the legacy of Lata, we will doubtless derive a better understanding of how she became supremely ascendant as a playback singer, her place in the film industry, the interplay of gender and caste in shaping the contours of her life, and the circumstances that conspired to make her the heartthrob of the nation. Luck played a part, too: it was rather fortuitous for Lata that, with the partition of India, the inimitable Noor Jehan left for Pakistan and so cre­ated an opening for her, even if it be argued that she would neverthe­less have found her footing in the industry. When her popularity is ascribed to her ‘golden voice’, little if anything has been said: she was not the only gifted female singer of her generation, her own sister Asha Bhosle being a case in point, as can also be said of Suraiya who as a leading actress also had the distinction of singing for herself. One can at best refine the point and suggest that Lata’s voice was supremely expressive, or that—as Javed Akhtar has put it—her pronunciation even in Urdu was flawless or that her sur was perfect.


The nation has in most cultures been conceived as feminine and I suspect that we can begin to have a better conception of the extraor­dinary place of Lata in the life of the nation when we imagine how she not only embodied the nation but sang the nation. The near conjunc­ture between 1947, the independence of India, and 1949 when Lata’s arrival on the national stage became inescapably clear cannot be missed. 1949 was, the film historians remind us, the breakthrough year, the annus mirabilis of her life that left ev­eryone else reeling. Naushad had four films that year but the one with Lata, Andaz, scored handsomely over the others, and Shankar-Jaikishan made their acclaimed debut with Lata’s voice in Barsaat. This would have been nearly enough to send everyone packing, but Lata topped it with one of the songs with which her name is indelibly linked, ‘Aayega Aanewala’, from the film Mahal directed by Kamal Amrohi. Some call it her ‘signature song’; it is surely among her best and critically important, not just because it launched her but also owing to its place in the repertoire of songs that illustrate what I have described as singing the nation.

‘Aayega Aanewala’ will ap­pear to many as an odd choice to understand the interface be­tween Lata and the idea of the nation. That honour surely belongs, most will proclaim, to ‘Aye Mere Watan ke Logon’, a tribute to the soldiers who died during the Sino-Indian war of 1962. The story has been told ad nauseam of how her rendition of the song before Jawaharlal Nehru on Repub­lic Day 1963 sent him into tears. But in one very impor­tant way, this song should be viewed as anomalous in the context of my argument: it was specially written for the occasion by Kavi Pradeep and is not attached to any film. What is distinctive about the culture of the Hindi film, and Lata embodied this ethos perhaps better than any other playback singer, is that the Hindi film performs the nation itself—and nowhere more so than in the songs. This is to say that the song bears the burden of some of the most characteristic aspects of the nation— what may be called values, norms and mores, but also the cul­ture’s literary tropes, reigning metaphors and expressive devices.

Let us consider briefly two instances from the song, ‘Aayega Aanewala’. The film Mahal is commonly described as a gothic horror film, but the plot need not be understood to comprehend the force of my argument. It is a romantic song— about longing, the anticipation with which one awaitsalover, thethumpingsoundofone’sheart­beat, hoping that the one who must come, will come (aayega aayega aanewala). And then we en­counter these lines: “bhatakhti hui jawaani manzil ko dhoondti hai/maaji bagair nayya sahil ko dhoondti hai/kya jaane dil ki kashti kab tak lage kinaare”. “A restless (and desolate) youth looks for her desti­nation,” Lata sings, “much as a boat without a boatman is looking for the shore; who knows when the boat, or heart, will dock at the banks of the river (kinaare)”. The listless heart as a boat that is knocked about on the sea is a stock metaphor in Sanskrit love poetry, but the entire series of metaphors—the boatman, the boat, the river, the shore—proliferates in the Bhakti literature of India and is unquestionably one of the more distinctive features of Indian literary traditions. To be sure, Lata is neither the lyricist nor the music composer; but, as most recognise, the singer over time becomes de facto the author of the song. What is em­phatically clear is that Lata, whose command over the classical music repertoire was just as formidable, sang with full aware­ness of how the metaphors drew upon Indian traditions.

Lata, whose command over the classical music repertoire was formidable, sang with full awareness of how the metaphors in ‘aayega aanewala’ drew upon Indian traditions

If Lata sang the nation, ‘Aayega Aanewala’ furnishes a yet more dramatic illustration of this phenomenon, one which also points to what I have previously described as the near conjuncture of 1947 and 1949, just as it suggests that Lata’s hold over the national imaginary had to do in some measure with both the Hindi film’s own construction of the virginal purity of (Hindu) women and of the nation itself. One of the most peculiar aspects of broadsheets or national­ist prints that circulated widely in the 1930s is the frequent depiction of martyrs as moths (parwaane) that have fallen at the feet of Bharat Mata (see image). Oddly enough, or perhaps not so, the song takes recourse to the same meta­phor: “deepak bagair kaise parwaane jal rahe hain,/koi nahin chalata, aur teer chal rahe hain (How is it that moths are burning though there is no flame,/No one shoots the ar­rows, yet I feel the sting of their pain)”. My point is not that there is any direct correspondence between the prints and the song. That is far from being the case, and indeed in ‘Dukhi Mata’ (see image) the flame is lit but the moths have been de­voured in its flame. Yet, as we know, shaheeds (Bhagat Singh among them, recognised here in this print by his trilby) are amar (immortal): truly do they burn (jal rahe hain). This literary device suggests the proximity of the song to the nation embodied as Bharat Mata.

As a coda, let me add a provocation or, in terms more familiar to the Hindi film song aficionados, spice up Lata with a bit of Asha. A good portion of the urban middle class in India has shown that it has little use for the ‘Father of the Nation’. As long as Lata, who was the undeclared Mother to the Nation, was there, India was never quite orphaned. Now, Lata’s gone, but…perhaps aayega aanewala. n

Vinay Lal
Vinay Lal is a cultural critic and Professor of History at University of California, Los Angeles. He is the author of several books, including The Colonial State and Forms of Knowledge: The British in India and Insurgency and the Artist: The Art of the Freedom Struggle in India