The Mind of Bengal

It is easy to see why Ray’s films were classed as arthouse in the West. In Calcutta, they were screened in cinemas which showed regular Bengali films, whose audiences in the 1950s and 1960s didn’t watch much Hindi cinema 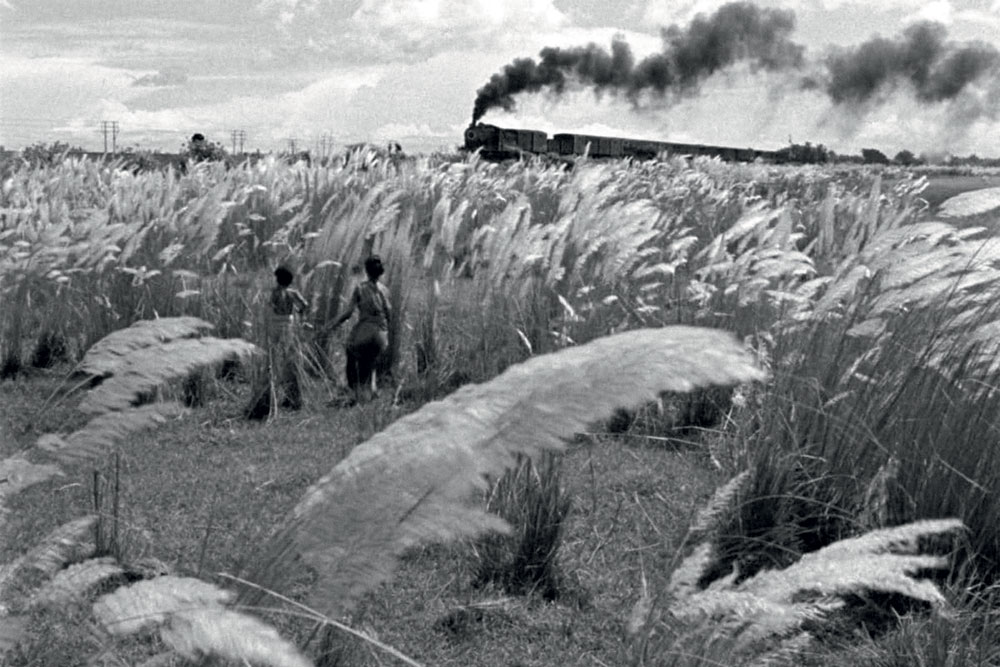 Apu and Durga in the train sequence in Pather Panchali


Satyajit Ray made the first Indian film I ever saw. I’m discounting all the ‘Empire films’ that I saw as a kid, mostly made by the Kordas, Hungarian Jews, one of whom, Alexander, was knighted twelve years after his arrival in Britain in 1931, after hiring no lesser a figure than Winston Churchill as a scriptwriter and who later married one of the most famous and beautiful Anglo-Indian actresses, Merle Oberon. I’m not sure which of Ray’s I watched first, but it was probably Pather Panchali as I bought a translation of the novel in 1980, my first Indian fiction in English.

When I moved to London in 1980 I became a regular at the National Film Theatre, now the British Film Institute, where you could see ‘art cinema’. There was a new Ray release at each of the annual London Film Festivals, it seemed, and his films were shown in London’s arthouse cinemas. My nearest encounter with Ray, the man, was when my plane from Calcutta (as was) to Delhi in 1989 was delayed by the arrival of President François Mitterrand to present Ray with the Légion d’honneur. 1989 was also the year I saw my first Hindi movie star—Amjad Khan on a flight in Rajasthan whom we recognised from Sholay—and the year I saw the first two Hindi films that sparked my interest, Chandni and Maine Pyar Kiya.

Before I began to watch Hindi cinema, Ray represented almost the entirety of Indian cinema for me and many other Europeans, alongside the more familiar offerings of Merchant Ivory, while the ‘Raj Revival’ gave us Attenborough’s Gandhi (1982), David Lean’s A Passage to India (1984), Granada Television’s Jewel in the Crown (1984), and some wonderful British Asian films, including My Beautiful Laundrette (1985).

Ray’s films were beautiful visually and aurally, and introduced me to new worlds. I didn’t know their wider context so when I watched most of them again last year during lockdown, it was as if I was seeing them for the first time.

Ray’s powerful cinematic images were my foundation for a sense of India. I could imagine the Bengali countryside by recalling Apu and Durga in the kash grass seeing the train, or understand the beauty of the monsoon by recalling the rain on the pond with music by Ravi Shankar (Pather Panchali, 1955). I could envisage the zamindari world by thinking of the chandelier in Jalsaghar (1958), or recall the stylish life of contemporary Calcutta from the trilogy (Pratidwandi, 1970, Seemabaddha, 1971, Jana Aranya, 1975), while seeing love grow in the crumbling world of the middle class (Apur Sansar, 1959) or the older city through the street life glimpsed through the shutters by Charulata (1964) and the splendour of now decaying mansions and their decaying families in it and in Ghare Baire (1984). Other highlights included the aesthetics of religion as portrayed in Devi (1960) and encounters of the urban youth with another India in Aranyer Din Ratri (1969). The stylish world of Uttam Kumar, the film star on the amazing train and Sharmila Tagore’s iconic glasses in Nayak (1966) and of the town of Darjeeling in Kanchenjunga (1962) are among the other lasting impressions of India bequeathed by Ray. Who can forget comparing his Bengali Varanasi in Aparajito (1956) with Joy Baba Felunath (1979)?


People have sometimes said I was bound to like Ray because he wasn’t Indian in his aesthetics. Yet, he was indisputably a true Bengali. Born in a well-known family and raised in Calcutta, a writer in Bengali (I’m proud to say my basic Bengali has allowed me to read a little) and English, his Feluda stories are loved by the bhadralok middle class who admire his films (according to a Bengali famous in the Western academy, Ashis Nandy), though they aren’t known in the West. Ray was simultaneously at home in Western high culture and in Bengali, though perhaps somewhat unfamiliar with the rest of India.

Ray doesn’t seem to have been comfortable with Western popular culture, his admiration being for European art cinema rather than Hollywood. Nor do his films showcase contemporary popular culture—he seems to have enjoyed the old-fashioned Europeans such as Miss Gilby (Jennifer Kendal) in Ghare Baire rather than the hippies of Pratidwandi. The latter and Jana Aranya show the grim realities of contemporary Calcutta and the boredom that ensues, while Seemabaddha depicts the shallowness of the allegedly glamorous lives of some the Calcutta elite.

In Aranyer Din Ratri, the male group of modern, educated and seemingly ‘Westernised’ youth that travels from the city, is selfish and insensitive, and crass in seeking thrills in the forest. Aparna (Sharmila Tagore) is composed and dignified, even when seeing them bathing in their underwear or dancing the twist at night, deliberately loses the memory game and has an impressively cool book and record collection. The story is again from literature (it is based loosely on a novel by Sunil Ganguly), but seems very Western in its characters and style.

It is easy to see why Ray’s films were classed as arthouse in the West. In Calcutta, they were screened in cinemas which showed regular Bengali films, whose audiences in the 1950s and 1960s didn’t watch much Hindi cinema, but enjoyed middle-class Bengali films, including the Uttam-Suchitra romances.

Ray doesn’t fit into the history of Bengali cinema in Calcutta, always standing apart. The true heirs of the New Theatres were those who migrated to make Hindi films in Bombay, such as Bimal Roy, Hrishikesh Mukherjee and Shakti Samanta. The loss of the audiences of East Pakistan was probably a major factor in these directors looking for wider audiences, though they continued their relationship with the Bengali cultural world and worked closely with other Bengalis. In the 1970s, the Bombay Bengali filmmakers, including Hrishikesh Mukherjee and a younger generation, made middle-class or middle-brow cinema, often remaking Bengali films.

RAY HAS CLEAR links to the world of Bengali literature. He made films based on the fiction of the most highly regarded Bengali authors, including Tagore and Bibhutibhushan Bandyopadhyay, as did Tapan Sinha who drew also on Tagore and many others. Shankar (Mani Shankar Mukherjee) provided the stories for two of Ray’s Calcutta Trilogy—Seemabaddha and Jana Aranya—but also films for other directors, including the wonderful but non-art film Chowringhee (1968), with many of the great stars of Bengali cinema: Uttam Kumar, Supriya Devi, Utpal Dutt and Biswajeet.

It’s striking that Ray eschewed the most popular Bengali author for adaptations, that is Sarat Chandra Chattopadhyay, whose many novels and stories were made into Bengali films, notably Devdas (many versions), Krishnakanter Will (1932 and 2007), Rajalakshmi O Srikanta (1958), and Hindi films, some of the latter by Bimal Roy—Parineeta (1953), Biraj Bahu (1954), Devdas (1955)—as did the 1970s Bengali and Bengali-influenced directors who made Majhli Didi (1967), Choti Bahu (1971), Khushboo (1975), Swami (1977). It would be fascinating to know more about why he didn’t use these famous works and how he chose others.

Ray made many historical films, including the classic Jalsaghar, whose use of classical music and the crumbling world of the zamindar makes it among my favourites, or his Tagore-stories (Teen Kanya (1961), Charulata, Ghare Baire). His Calcutta Trilogy can be compared to Mrinal Sen’s, whose trilogy is more radically arthouse.

The fame of Ritwik Ghatak, regarded by some as a greater filmmaker than Ray, has remained mostly among Bengalis and cinephiles. Even though the British Film Institute has issued DVDs of some of his films, and an excellent book in their ‘Classics’ series on Meghe Dhaka Tara (by Manishita Dass), his films have not found an audience in the West. Ray tried to promote him, but they differed temperamentally and occasionally clashed.

Ray was not celebrated so much in the rest of India as he was in Bengal and in the wider world. Many filmmakers outside India have paid tribute to Ray and to his early films. Akira Kurosawa said, ‘Not to have seen the cinema of Ray means existing in the world without seeing the sun or the moon’

Ray worked with several stars of Bengali cinema, and, despite a broader career (see ‘Rachel Papers’, December 11th, 2020), for many of us, Soumitra Chatterjee was Ray’s hero. Ray’s film with Uttam Kumar, Nayak, was clearly partly biographical and showed a different side to the Mahanayak’s talents. Ray introduced Sharmila Tagore in Apur Sansar, and worked closely with Madhabi Mukherjee.

I don’t know enough about Bengali cinema today to assess Ray’s legacy or measure his influence. However, it is clear in the cinema of Rituparno Ghosh, and perhaps the cinema of Aparna Sen, whose family associations were close to him, her father, Chidananda Dasgupta, having been close to Ray, as well as her work with him (Teen Kanya) and her daughter, Konkona Sen Sharma’s excellent Hindi film, A Death in the Gunj (2016) having some elements of Aranyer Din Ratri.

It is a great irony that the radical Bengali director Q (Qaushiq Mukherjee), who has been sometimes dismissive of Ray, despite a marked physical resemblance, is playing Ray in the biopic of Soumitra being made by Parambrata Chatterjee, a leading figure of contemporary Bengali cinema.

The Bengali directors in Hindi, such as Shoojit Sircar, even when filming in Kolkata, do not seem very influenced by Ray. Ray’s influence on Indian cinema more widely is perhaps seen in makers such as Shyam Benegal, whose wonderful interview with Ray (Satyajit Ray, 1982) is essential viewing.

Multiplexes and new OTT channels, such as Amazon Prime and Netflix, have encouraged realistic cinema and series to flourish in India today, but this is more a descendant of the middle-brow cinema of the 1970s, located between the mainstream/popular and the art in all senses, from production to audience viewing.

Ray was not celebrated so much in the rest of India as he was in Bengal and in the wider world. Many filmmakers outside India have paid tribute to Ray and to his early films. Akira Kurosawa said, “Not to have seen the cinema of Ray means existing in the world without seeing the sun or the moon.” Martin Scorsese says his Taxi Driver was influenced by Ray’s Abhijan (1962), while others, including Francis Ford Coppola and Wes Anderson, have praised his work fulsomely. Ray was given an Honorary Academy Award (‘Oscar’) in 1992.

Very few cultural figures from India were widely known in the West before Rushdie’s Midnight’s Children and the subsequent interest in Indian English literature. Before the 1980s, the only household names I recall were Rabindranath Tagore, Ravi Shankar and Satyajit Ray.

It’s striking that the three acclaimed figures were all Bengali upper-caste men. Is the work of Ray another case of Bengali exceptionalism? Bengal’s sense of (not entirely unjustified) cultural superiority makes many Bengalis comfortable in their own culture as well as in others. They keep pre-war British food traditions alive and about 90 per cent of the queue outside 221B Baker Street is for those waiting to see the home of a Bengali who happened to be born British.

Ray’s films guide us through Bengali culture from the nineteenth century adaptation of Western ideas and culture, through communist and leftist eras, to the loss of Calcutta’s status as a global city, economic powerhouse and India’s cultural heartland. Bengal has been apart from the rest of India in many ways, seeing itself as a leader more than an equal. Bengal has even followed its own unique politics, from Netaji to Didi. One can only speculate how Ray would show the current political shifts whose results will coincide with his birth centenary.