In a world of ageing Khans who’ve had a particularly terrible 2018, the whispers about Ranveer Singh being the new Khan on the block are becoming louder 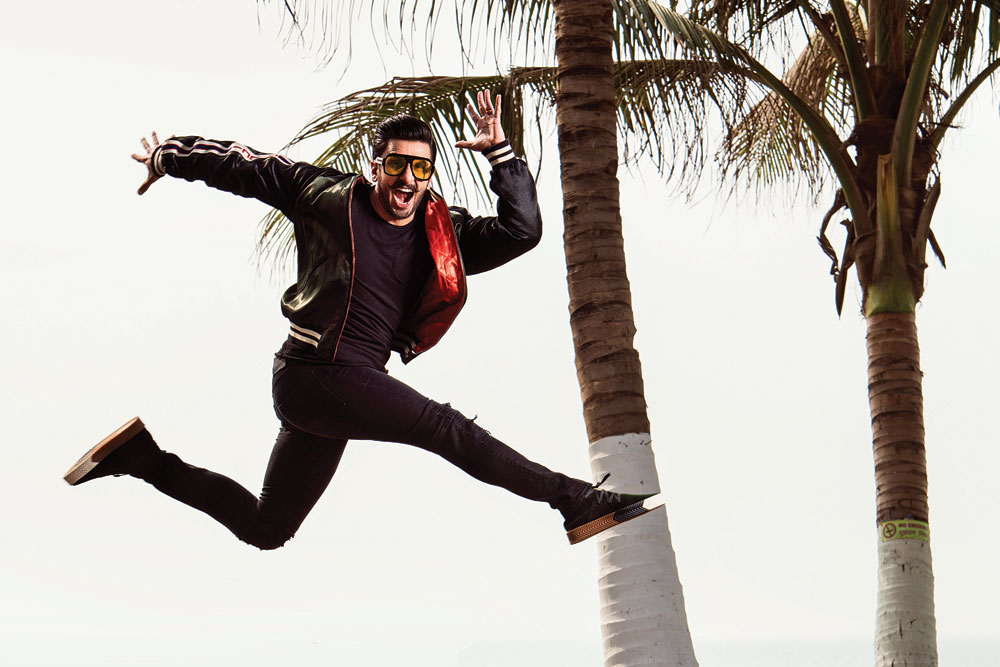 THERE’S A memorable but somewhat rude dialogue in Anurag Kashyap’s guns-on-the-Ganga epic, Gangs of Wasseypur (2012), that articulates India’s twin obsessions with cinema and its heroes: ‘Sab saale sabke dimaag mein apni apni picture chal rahi hai/Sab saale hero banna chah rahein hain apni picture mein’ (‘Everyone has a movie going on in their minds/and they all want to be its hero).’

Few have wanted it as badly, by his own admission, than Ranveer Singh Bhavnani, who has often called himself a product of Bollywood. A child of a family on the periphery of Mumbai’s grand cinematic dynasties, the 33-year- old has spent almost a decade in the industry, building a distinct body of work with close to 20 films, the last three of which have grossed over Rs 100 crore at the all-too-critical box office. The boy who was obsessed with Mumbai movies, watching VHS tapes of old movies while being fed by his mother, dancing to its songs for the pleasure of his grandmother, Chand Burke, a former actor from Lahore in Pakistan, and even performing a scene from Deewar for his first acting class while in college in America, can now call out his own collection of iconic characters: the demonic Alauddin Khilji, the mindblowing police officer Simmba, and the electric Dharavi Gully Boy, all in one year.

Ranveer has always been acutely aware of Mumbai cinema’s power to capture the collective imagination of the nation, and the ability of its heroes to define its eras, beginning with the Nehruvian triumvirate that embraced the romance of post-Independent India. There was Raj Kapoor’s wide-eyed socialism, Dev Anand’s smooth urbanity, and Dilip Kumar’s deep-seated tragedy. Cut to the sixties when Shammi Kapoor huffed and puffed with his raw sexuality and even rawer mannerisms, reducing the polite 50s to a cinder. Here was a hero who was not afraid of winning, warring, and wooing with energy, one pelvic thrust at a time. As India changed, so did the hero who articulated this angst. Suddenly nothing was good enough—there was unchecked crime on the streets, the politician was morally corrupt, families were becoming dysfunctional, and there was poison in the air. Yet, Hindi movie audiences have never been equipped for too much reality, so all this had to be channelled through the clearly posh persona of Amitabh Bachchan. Even in his darkest moments, we (and the camera) looked up to him to know how to negotiate our modernity, from the breadth of our flares to the length of our sideburns.

Cut to three decades dominated by three men with a common surname, each appealing to a different constituency with consistency and charm. Aamir Khan’s intellectual earnestness, Shah Rukh Khan’s charismatic corporate star, and Salman Khan’s muscular man child. The evolution of the three Khans, their personal lives, public spats, and professional accomplishments have held India spellbound. But the nation has changed, unleashing forces as positive as they can be pessimistic. Where there were once easy definitions, there are divisions; where there was once a definitive national identity, there are multiple diversities; and where there was one audience, there are now as many as there are platforms.

As we enter into the third decade of the noughties, could Ranveer Singh be the superhero of our paradoxical times? Film scholar Rachel Dwyer believes he is already a superstar, able to retain his originality while assimilating elements of other stars. “He’s educated and well- spoken in real life but plays a lower class person with as much success as Amitabh Bachchan did. His off-screen wackiness is like Kishore Kumar’s but his style is more that of a Kapoor. He is part of a star couple on and off screen, well-matched with Deepika Padukone, but he gels well with other actresses.” Will he be the only superhero? She isn’t so sure of that. “The other well established male star is Ranbir. A good actor, versatile and can convey a great range of emotions. He has chosen some rather odd films but will be around for many years as he’s not just a young hero.”

Yet, in a world of ageing Khans who’ve had a particularly terrible 2018, the whispers about Ranveer being the new Khan on the block are becoming louder. Salman Khan’s Race 3 (2018) underperformed at the box office by the superstar’s superlative standards, Aamir Khan’s Thugs of Hindostan (2018) was an awful film for which the star had to apologise, and Shah Rukh Khan continued to repeat his movie missteps with a bloated Zero (2018). Film scholar Nasreen Munni Kabir avers: “Everyone has their time in the sun. And everyone is of their time. The fame and following of all three Khans is set in stone. Nothing will change that. But every generation wants its heroes, people they identify with. A new face brings new hope and renewed aspirations. We can like the Khans and also like Ranveer, but it’s about who is more relevant in the here and now? And what does it say about the here and now.”

Ranveer’s time has come. But in an industry built on the shifting sands of public likeability and artistic integrity- how long will it continue in an era that cannot distinguish between a star and an influencer?

Indeed, India is not the country it was when the Khans began or even when they were at their peak. The business of Bollywood heroes is one of diminishing returns. The Khans at their finest could never repeat Amitabh Bachchan at the height of his fame. Any new star will find it impossible to imitate the universality of the Khans. The audience is far less tolerant of ordinary scripts being bolstered by star power. It is much more demanding of compelling stories. It has an increasingly schizophrenic attitude to the consumption of glamour—those whose controversies it follows are not necessarily those whose movies it watches. And it has a diverse array of media to choose its entertainment from. So an unheralded Vicky Kaushal can seemingly come out of nowhere with a well-made war movie, Uri: The Surgical Strike (2019) and it goes on to make Rs 240 crore and counting. And equallya consistently good but low-key Ayushmann Khurrana can score a Rs 140 crore box-office hit with Badhaai Ho! (2018) about his mother’s pregnancy and be an audience darling.

In today’s Bollywood, nothing is certain. Even if you bare your bottom, dance frenetically around Paris, and mouth ridiculous dialogues pretending to be cool and with it, you cannot get a Befikre (2016) to succeed, even though it is directed by Mumbai’s most powerful producer Aditya Chopra. Ranveer Singh realised this when Befikre that was studio designed to make him slip into Shah Rukh Khan’s shoes flopped. Ranbir Kapoor, the other star touted to replace the Khans, had realised this earlier, when his movies with the two Kashyap brothers [Abhinav Kashyap’s Besharam, (2013), and Anurag Kashyap’s Bombay Velvet, (2015)] brought his hard-won early stardom crashing down to earth.

Ranveer is aware of the fickleness of stardom but he is both hungry for more and careful about its orchestration. A PR analyst who doesn’t want to be named calls him a natural actor but a constructed, method star. Indeed, Ranveer is forever in performance mode, boom box for company, energy on high, and an effusive embrace for everyone. Even journalists who have interviewed him at length have rarely been invited into his private space, his “apna time”, be it his home or his vanity van. As sociologist Shiv Viswanathan notes: ‘He is outgoing but suggests a little black box of the self inside. In a deep way, he is the one perpetual performance, off and on screen.’

Ranveer’s preparation for his roles has become almost as iconic as that of Aamir Khan. He is now preparing for his next role, as Kapil Dev in Kabir Khan’s ’83 on the World Cup winning captain. It is four months of intensive training, says Khan, learning how to bowl like Kapil Dev. Balwinder Singh Sandhu from the 1983 squad is his team coach and Kapil will also be giving his inputs. Khan calls him a chameleon, adding “he’s that rare actor today who is able to totally and completely transform himself into the character he is portraying. His face seems to change every character. From Khilji to Simmba to Gully Boy, we just don’t see the same person—they are three different and unique people on screen.” He looks for the key in every character and struggles until he locks down on it— one remembers meeting him while he was preparing to play Khilji worrying about what accent to use, given that he was born in Bengal and then adopted by his uncle Jalal-ud-din Khilji whose ancestors were Turks who had migrated to present day Afghanistan. Eventually, he would lock himself up in his new flat in Goregaon for 21 days to isolate himself and find the darkness within.

Ranveer takes his celebrity status almost as seriously as he does his acting. The flamboyant suits, the witticisms, the networking. From the time he would go to parties with his boom box to get noticed in a sea of newbies to now, he can be the life and soul of every celebration— witness his wild dancing at Sonam Kapoor’s wedding reception with father of the bride Anil Kapoor. Equally well-orchestrated is the image he has presented to the public as one half of Bollywood’s premier power couple since his Lake Como wedding to Deepika Padukone. She is higher paid, has worked longer in the industry, and is clearly the bigger star. He is comfortable enough in his skin to accept that and revel in it—the perfect man in the Age of #MeToo, so much so that he has even moved into her house post-marriage to blend seamlessly into her new life. From picking her up from restaurants with paparazzi in full attendance to colour coordinating their airport looks, Ranveer never misses a beat in playing the part he has assigned himself— knight in shining armour to the “most beautiful girl in the world”. And where images go, words and emojis follow, with the couple routinely exchanging messages on Instagram with each other and the world. You are unstoppable, she gushes. You are my superpower, he responds. Awww. Talk about a match made in social media heaven.

Viswanathan finds in Ranveer a hybridity of styles which makes him fascinating. ‘He is the upstart, the Johnny- come-lately and yet he can easily be the aristocrat used to power and riches. He conveys a restlessness which is potentially performative. Yet he is fluid enough to be past and present in a way few heroes can be. His sense of experimentation allows you to tolerate his awful mistakes,’ he notes. So whether it is launching full throttle into a condom ad in 2014 or allowing himself to be roasted (along with Arjun Kapoor) by All India Bakchod in a comedy act in 2015 that went sour, Ranveer shows his inherent risk-taking ability, much like most of young India.

Backed by hard work—who can top a prep of ten months training with rappers Divine and Naezy for Gully Boy— and Ranveer’s irresistible rise seems set to continue even in an increasingly crowded field where a new star boy is born every year. Yes, Ranveer’s time has come, but in an industry built on the shifting sands of public likeability and artistic integrity, how long will it continue in an era that cannot distinguish between a star and an influencer? Where audiences can celebrate the parts of you that resonate and reject what does not.

Ranveer Singh: A Hero of Our Time
Second Coming