Our Ladies of Deliverance 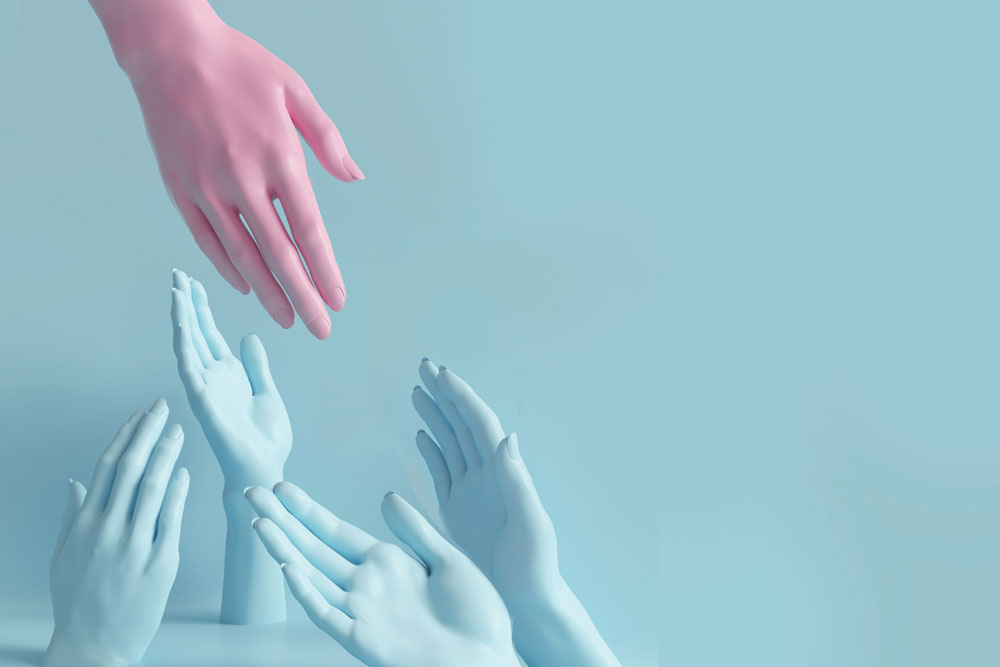 
OVER TWO DECADES ago, I met a woman over lunch with a common friend and noticed that she was wearing a pendant with the Indian god Ganesha. When I told her I collected Ganesha idols, she said it was an omen and that we were meant to be friends. We agreed that the next time I was in New York, I would cook an Indian meal for her and her friends. When I did visit next, I got a call from someone from her household asking what I planned to cook. I gave them the menu, fully expecting to make a simple meal in a small apartment in New York. But I found myself in a private elevator that opened into a penthouse apartment with her personal chef waiting for me with all the ingredients and chopped vegetables artfully arranged on the spacious kitchen counter. I figured this was not a simple meal with a gal pal. It turned out that my friend, Courtney Sale Ross, was the wealthy widow of a media mogul with a penthouse apartment, a mansion in the East Hampton and an ambitious project to build an alternative school that integrated technology into teaching. Her wealth never stood in the way of our friendship and the collective mission to create The Ross School into a blueprint for the future of learning was all-encompassing.

The early 1990s saw the early adoption of laptops and as a technology evangelist I was excited about the prospect of integrating laptops, servers and networking into education curricula. As we poured over plans, deciding the location and the contents of the server room, I saw Courtney paying attention to the last details of how the wires were going to be covered by a column or cleverly concealed in the ceiling. I witnessed firsthand what the power of money combined with an eye for detail and a vision for the future could do. Over time, I joined Courtney in the private concerts she hosted with music greats like Aretha Franklin and Andrea Bocelli as fundraisers to match the money she was donating to build a great institution. She brought together the likes of mathematical genius Ralph Abraham and educationist and developmental psychologist Howard Gardner to design a curriculum from scratch. She personally chaperoned the children on educational tours and ensured that the children of those working at the school got the same privileges as their wealthier counterparts. I had met many wealthy people in my life but Courtney blew me away with her unique combination of design aesthetic, discipline, hard work, ability to grasp complicated concepts, and expressing all these qualities through an institution. This was the best kind of philanthropy money could buy.

Fast forward 20 years. I moved to India after co-hosting TEDIndia and started the INK Conference in 2010. I was new here and naturally, thrilled to meet all the attendees who believed in our mission and joined us. A woman with a charming smile introduced herself to me as Anu Aga and congratulated me on the quality and the content of our conference. We became friends and I visited her when I was in Pune next. Since I had lived outside of India for well over three decades by then, I did not know her story. I learned about how she took the helm of Thermax after the tragedy of losing her husband and then her young son; about how she brought in professional help to build one of the best companies in India. Her commitment to philanthropy comes from a deep sense of responsibility she attaches to her privilege. After making Thermax a successful company along with her daughter Meher Pudumjee, she walked away from it and dedicated herself to philanthropy. Her giving is strategic and comes along with something even more precious than her money—her time. She supported a brilliant entrepreneur, Shaheen Mistri, in starting Teach for India, not only donating consistently but also connecting Shaheen to others who could help her in her mission. The simple décor of her home, her well-utilised car, and her cotton kurtas—nothing gives away the fact that she is a billionaire. This was the best philanthropy I had witnessed where the money was not even visible.

With more women like Courtney and Anu making their impact felt, we are at the beginning of a new age of business and philanthropic leadership.

The dawn of the Industrial Revolution brought with it the age of specialisation. This meant breaking down any task into its least common denominators and developing a super specialty in that tiny area of focus—be it medicine, engineering, accounting, design or the performing arts. This also gave birth to a style of management that was very male-dominated, with a rigid hierarchy of power. The technology industry that began in Silicon Valley and spread its wings across the globe brought more egalitarianism to the equation, but the management power structure still remained very male-dominated. In the absence of women from positions of power and decision-making authority, in the absence of diversity of thought, business structures evolved with a single focus where wealth accumulation triumphed over any other aspect of community well-being. Corporations were evaluated and awarded singularly for economic success. This contributed enormously to environmental damage and economic inequality. In this economy, most women felt the need to be ‘more like’ men. When I started my career in the late 1980s, I thought that I had to ‘look’ like men as well. So I cut my hair short, wore blue pinstriped skirts or pant suits with a bow tie clipped to my white shirt, taking cues from other women professionals my age. I have since been lucky to meet women who dress with elegance and femininity and they taught me to embrace who I was and to live with authenticity.

WITH THE BEGINNING of the new millennium came the era of the creative economy. In this economy, there was an access to information and an opportunity to connect that allowed a diverse set of people to voice their opinions on public platforms. The currency of this era is community. Personal wealth, powerful titles and past laurels can no longer cover up bad behaviour. Be it the co-CEO of Netflix, Ted Sarandos, apologising to his trans-employees or a teenager like Greta Thunberg holding global attention to climate disaster, this is an era where soft skills like compassion, creativity and communication are as important as subject knowledge and financial prowess. And in this era, the rise of a different kind of leadership that is embracing an entire array of soft skills tossed away as ‘too touchy feely’ is inevitable. 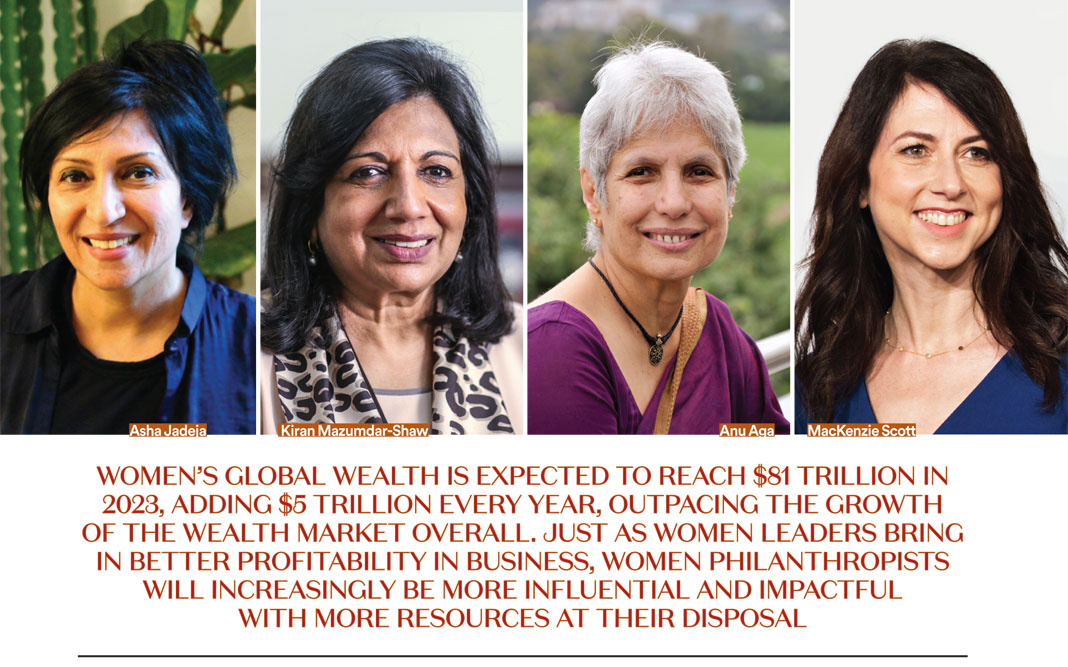 As more women enter politics, business, media, arts, philanthropy and design, they bring big changes to management styles. In politics, the question “Which countries had the best coronavirus responses?” is often answered with “Countries with women leaders” (listing leaders of Germany, Taiwan, Iceland and New Zealand, to name a few). In entertainment, women like Ava DuVernay and Shonda Rhimes in Hollywood, and director Zoya Akhtar in India, are claiming their spot on their own terms, addressing social issues in the most creative and commercially successful ways. Today, we are just witnessing a fraction of the exponential growth that can be brought into our economy. An August 2021 report by Catalyst Research shows that women currently hold only 6 per cent of CEO positions in S&P 500 companies. Another report from 2016 by Credit Suisse indicates companies with more female executives in decision-making positions continue to generate stronger market returns and superior profits. Imagine the purpose-driven and profitable world we can create if that 6 per cent grows.

I have been privileged to observe some inspiring women in business from up close. Kirthiga Reddy, who led Facebook India, went on to be a venture capitalist at Softbank in Silicon Valley and now runs her own fund and is in the process of writing a book. Indu Navar lost her husband to ALS and directed her grief towards starting one of the most in-depth explorations of brain science and technology together and launching a fund alongside. I have also had a fly-on-the-wall perspective for over a decade of Jayshree Ullal’s journey from being a tech leader to business leader at Cisco to the CEO of the multi-billion-dollar Arista Networks. She still catches up with friends over lunch at regular Indian restaurants. All these women wear their accomplishments gracefully and are successful by any measure.

I am also thrilled to see women take on prominent roles in philanthropy. In the past, when I have had the occasion to speak to some prominent women philanthropists, they felt they were spending money earned by their husbands and so, did not feel right taking credit. Today, they know themselves to be equal partners in their husband’s fame and wealth. From MacKenzie Scott who stayed gracefully quiet through her high-profile divorce from Jeff Bezos and made an impact through her actions of giving away billions of dollars to Melinda Gates, Laurene Powell Jobsand Priscilla Chan, women are carving identities for themselves as separate from their spouses. Philanthropists like Asha Jadeja and Anu Sethuram are investing heavily in the future supporting fellowships for the youth. Sudha Murty has brought awareness to her work through social media and her fame as a writer; Rohini Nilekani is taking on huge issues like water and education; Stefania Magidson is focusing on young women of her native country Romania and creating a blueprint for diaspora giving. The list goes on.

Boston Consulting Group reports that women’s global wealth is expected to reach $81 trillion in 2023, adding $5 trillion every year, outpacing the growth of the wealth market overall. Just as women leaders bring in better profitability in business, women philanthropists will increasingly be more influential and impactful with more resources at their disposal.

Here are the three things that I submit are important. First, we need more women to step forward, not to follow current norms but to set the tone in their own way. I personally coach women leaders one-on-one as well as through INK programmes and I witness many women unwilling to stand in front of a group and take a bow. Second, it is important to imbibe male as well as female styles of management. We need to have the entire arsenal of both management styles and know what to use when. And we have an explosion of talent in men and women who exemplify this hybrid style. Airbnb CEO Brian Chesky’s letter to his employees where he showed his vulnerability and accepted uncertainty and the failure to retain all employees; Jason Sudeikis and his team’s brilliant creation of friendship between two professional women—characters Rebecca and Keeley, played brilliantly by Hannah Waddingham and Juno Temple—in their TV show Ted Lasso are good examples.

Finally, it is important to be sensitive to our surroundings, to be open to changing even our deepest held beliefs based on the context. This is no longer a male or a female-led world—we each channel the masculine and feminine within us. With more women coming on board, we are finally moving towards the balance required to write our future, together.