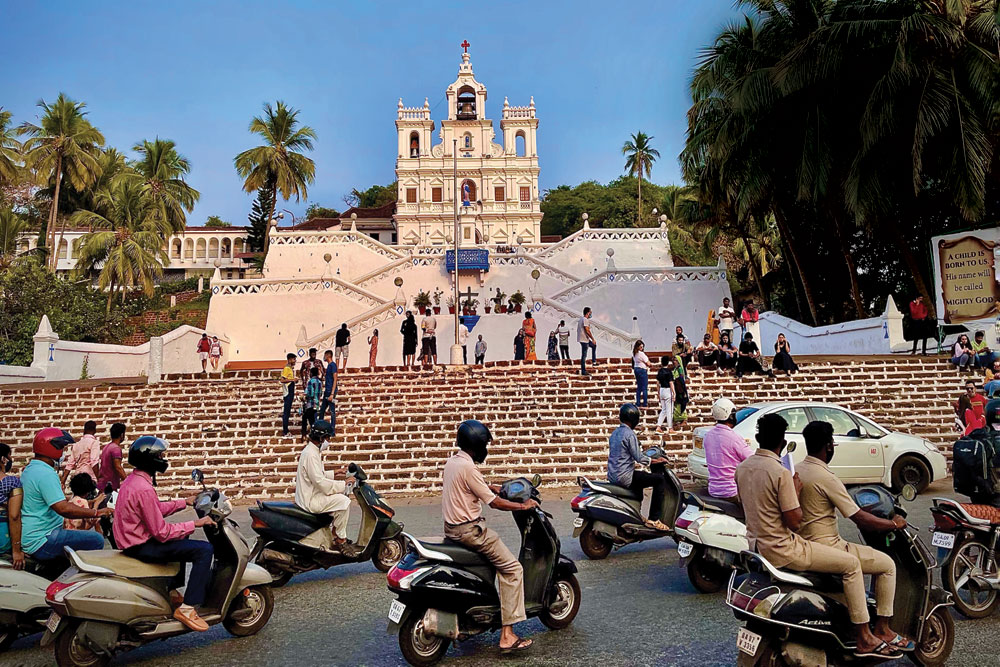 
THREE HUNDRED CRORE is a dot in the larger picture of the Union Budget. Normally the allotment of such a sum doesn’t find mention given that the total expenditure of the Government is around Rs 30 lakh crore. The amount has been set aside to celebrate the 60th anniversary of Goa’s liberation from the Portuguese. As Nirmala Sitharaman said in her speech: “Goa is celebrating the diamond jubilee year of the state’s liberation from Portuguese rule. From the GoI’s side, I propose a grant of 300 crores to the Government of Goa for the celebrations.” That the finance minister chose to highlight this sum is an indication of how much the state has a foothold in the national consciousness.

The Budget is also about political signals and Goa has always been high up on the BJP’s priorities because it was one of the early states it captured power in. However, to put Goa in perspective, take its population size. It is under 20 lakh. That would be akin to a large suburb in Mumbai.

Dharavi, Mumbai’s biggest slum, has half of Goa’s population. In size it is one-tenth of Kerala, which itself is counted as one of the smaller states. Goa has only two members of Parliament—it doesn’t matter to the formation of national governments. Its small size or population has not been a factor in the state’s influence, both in the present and in history. Much of the credit must to go to its geography, its strategic coastal location that made the Portuguese choose it as their headquarters in this part of the world.

When the Portuguese first came to India in 1497 it was Kerala that they tried to get a permanent foothold in. After a period of warfare and intrigues with the local kingdoms there, they found Goa, conquered first in 1510 from the Bijapur Sultanate, more stable for their colonial ambitions. From here, they took control of the spice trade and expanded. By the next century, other European powers were displacing them. In Goa Travel: Being the Accounts of Travellers from the 16th to the 21st Century, an anthology edited by Manohar Shetty, there is an account by a French merchant, Jean-Baptiste Tavernier, in the middle of the 17th century, that speaks of this decline: ‘The island abounds in corn and rice, and produces numerous fruits, as mangues, ananas, figues d’Adam, and cocos (mangoes, pineapples, plantains and coconuts); but a good pippin is certainly worth more than all these fruits. All who have seen both Europe and Asia thoroughly agree with me that the port of Goa, that of Constantinople, and that of Toulon, are the three finest ports in both the continents. The town is very large, and its walls are built of fine stone…Beef and pork afford the ordinary food of the inhabitants of Goa. They have also fowls, but few pigeons, and although they live close to the sea fish is scarce. As for confectionery, they have many kinds, and eat a large quantity. Before the Dutch had overcome the power of the Portuguese in India, nothing but magnificence and wealth was to be seen at Goa, but since these late comers have deprived them of their trade in all directions, they have lost the sources of supply of their gold and silver, and have lost much of their former splendour. On my first visit to Goa I saw people who had property yielding up to 2,000 écus of income, who on my second visit came secretly in the evening to ask alms of me without abating anything of their pride…’


And still, while their empire whittled away to nothing, Goa remained a Portuguese colony for half a millennium, until 60 years ago they were swatted away. The only surprise was that the independent Indian government should have negotiated with Portugal for so long. When they decided to take over, it took just two days and almost no resistance. But the Portuguese influence in India still remains on many fronts. Take food. Many of the things we take for granted as Indian are, in fact, Portuguese introductions. Like tomato and green chilli, the rajma of the rajma chaval. As an article on livehistoryindia.com says: ‘The most significant contribution of the Portuguese has been the variety of fruits and vegetables that they introduced to the Indian land. Many of the most common fruits and vegetables consumed in India today, came with the Portuguese. These include potato, tomato, tapioca, groundnuts, corn, papaya, pineapple, guava, avocado, rajma (kidney bean), cashew, chikoo, capsicum and even the chilli.’ Then there is the bread that we know as pav. Says the article: ‘According to Lizzie Collingham in her book Curry–A Biography, the Portuguese landed in parts of India where the locals ate rice. But they missed their crusty bread which they also needed for Holy Communion. They could find wheat flour in Goa but yeast was hard to come by. So they started using toddy to ferment the dough and created the pav, which derives its name from the Portuguese pao. Today the pav has transcended the boundaries of Goa to become a much loved and integral part of cuisine across the West coast, riding to fame with all-time favourite snacks like vada pav, pav bhaji and kheema pav.’

SINCE THE DEPARTURE of the Portuguese, Goa broke larger into Indian culture but in an unusual place. A few decades back, if you asked teenagers, then it was stories of Goa’s nude beaches that fascinated them. And hippies, parties, drugs and all the things that the rest of India turned their nose at in an age of exaggerated morals before consumerism. But even as the other India reached out to sensual experiences post-liberalisation, Goa did a retreat for both to meet somewhere in the middle. When the model-turned-runner Milind Soman ran nude on a Goa beach recently, he was promptly greeted with a police case. A 2019 New York Times story on Goa looked at how the state had changed and found the rest of India barging into where Westerners had once established themselves. It said: ‘When hippies traveled overland from Europe to India decades ago, Goa was often the final stop on the trail, welcoming to its beaches Westerners who wanted to drop out in a place where living was cheap, drugs plentiful and swimming nude the norm… But most of the original countercultural community is now gone. It has fallen victim to age, higher costs of living and the death of the hippie trail in the late 1970s, as wars closed the route. The final blow came, remnants of the community say, when the government started cracking down a decade ago on the informal businesses the hippies had set up to support themselves. Today, Goa’s renegade lifestyle attracts an entirely new type of traveler—young Indians who are flocking here not to find themselves, as the hippies once did, but to celebrate their bachelorette parties or dance atop bars. As India’s economy booms and builds a middle class that barely existed two decades ago, Goa has transformed from a laid-back enclave for bohemian Westerners to a mass tourist destination for Indians.’

Since the departure of the Portuguese, Goa broke larger into Indian culture but in an unusual place. A few decades back, if you asked teenagers, it was stories of Goa’s nude beaches that fascinated them. Even as the other India reached out to sensual experiences, Goa did a retreat for both to meet in the middle

At present, the number of tourists who go to Goa in a year outnumber the local population manifold. It is still considered an escape from real India, of afternoon naps, verdant lonely roads, somnolent villages mixed with beach markets, cheap booze and throbbing nightlife. Numerous writers, artists and others in the creative field have shifted there. Many wealthy have holiday homes. The increasing influx of tourists has led to a backlash from locals. In 2018, the state’s tourism minister speaking at an event called domestic tourists “scum of the earth”. The Indian Express quoted him saying: “Today we have almost six times population of Goa coming as tourists. Those tourists are not top-end tourists, they are also the scum of the earth. Are they responsible? They are not. If you compare Goans to rest of India, we are high in per capita income, social and political consciousness, we are much superior to people who are coming in. Those people, how you will control (them)? Can you control them? We could control them at one point in time. But we jumped the Russians…We decided to put all eggs in one basket. The British have gone away. And, now we are dependent upon the north Indians and this is what they do. They are not bothered about Goa. They want to recreate Haryana in Goa.”

There is irony in this statement, as if history seems to have turned a full circle—from foreigners taking control to being driven out to the welcoming of the foreigner again to the exclusion of Indians. Fortunately, that is only a fringe sentiment. Goa is too integrated for politicians or parties to pull it in any other
direction. When its liberation is highlighted in the Budget speech, it is also a message about Goa’s liberation being an extension of the Indian freedom movement. There is no Goa separate from the idea of India now.