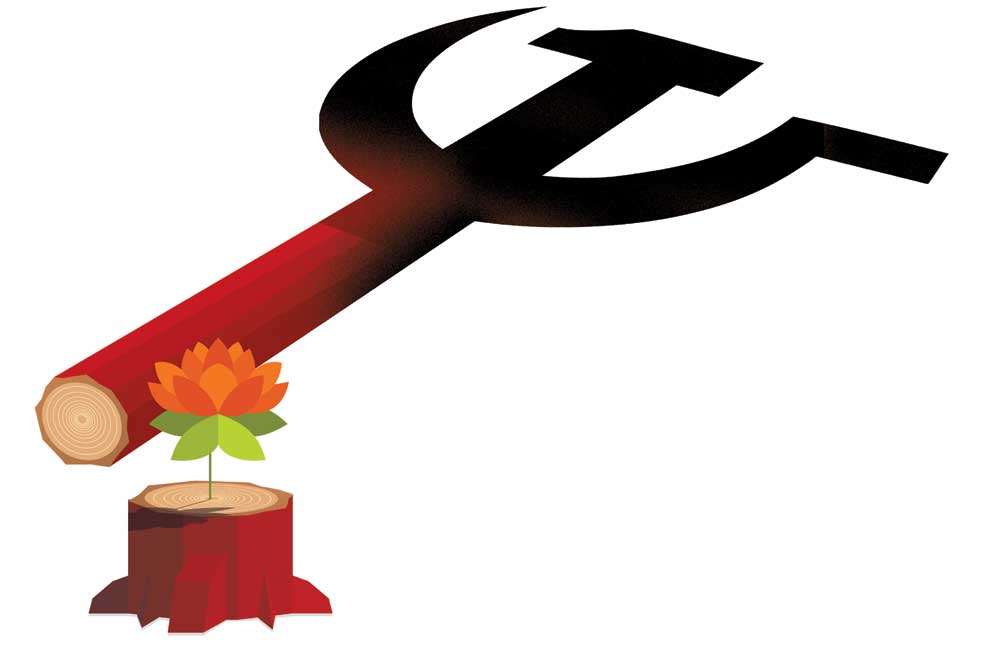 WITHIN DAYS OF a BJP-led government being elected to power in Tripura, the state has been in the news for the wrong reasons. The demolition of two statues of the Russian revolutionary Vladimir Lenin has evoked outrage across the country. From the Left parties to intellectuals to anyone who has an opinion on this state enclosed on three sides by Bangladesh, has expressed anger.

It is another matter that for the quarter century that Tripura was under Left rule, no one bothered to let out even a whimper on the far greater structural violence in the state. Poverty and unemployment never made headlines. Here, ideological bromides worked wonders.

Tripura is the state with the highest rate of unemployment in India. The Economic Review of Tripura for 2015-16, the latest state-level summation of economic performance, notes that in 2016, the number of job seekers on its live register was 693,516. This amounts to 18.8 per cent of the state’s population and is corroborated by surveys carried out by the Labour Bureau.

In any other state, such a high level of joblessness would almost certainly have led to violence or lawlessness or both. Instead, Tripura has remained largely peaceful since 2000, when the last known events associated with its local insurgency ended. The recipe of this ‘peace’ was a formula mastered by the Indian Left a long time ago. In terms of taking care of people’s rudimentary needs, Left-ruled states have done much better as compared to others. In Tripura, the infant mortality rate stands at 20 for every 1,000 births, almost half the national average of 37. The amount of money devoted by the state government to the social sector is huge in comparison to its revenues. Data for the years 2014-15 to 2016-17, the latest for which any is available, shows that Tripura spends the highest sum on the social sector in the entire northeastern region, with the exception of Assam.

But behind this paradoxical formula of joblessness and availability of basic welfare lies a dirty fiscal secret: Tripura’s massive dependence on the Union Government to meet its financial needs. In 2015-16, the grants that Tripura received from the Centre amounted to 3.4 times its own tax revenues. If Central aid being close to three-and-half times the money a state garners on its own wasn’t high enough, this ratio rose to nearly 4.8 in 2016-17. Such comparisons often lead to howls of protest. After all, Tripura is among India’s special category states that have extraordinary provisions to enable them to function. These states are given easier access to finances and at terms that are not available to most states. That is because their difficult geographic conditions—location as well as terrain—require greater attention to be paid to their needs. But in Tripura’s case, it also robs it of the lustre that scholars and politicians often spy in the performance of states under the rule of Communist parties. All that can be said for such states is that they are able to use their resources better. There is nothing to suggest that the economic performance of Kerala, West Bengal (until some years earlier) or Tripura had anything to be commended. Rather, industrial stagnation and lack of investment are the defining features of these states.

Not that growth mattered. What was implemented in these states was an idea that originated in the early 1980s. It was simple: the task of securing entitlements for people did not require economic growth. All that was needed was appropriate expenditure to ensure the provision of these entitlements. The example of high life expectancy in Sri Lanka, with much lower national income per capita than other fast-growing developing countries, was cited as an illustration of a different developmental path. This held economists, commentators, administrators and politicians in thrall for a long time, almost until 2007 when this entitlement approach was foisted on India as a whole by the then UPA Government in Delhi. It could work well in a state like Tripura, where its financial burden fell largely on the Union budget. On the face of it, this divorce between upliftment and growth had no ill effects.

Ultimately, without a steady incline in personal incomes, the political returns from entitlements diminish over time. The effects of this may remain masked for a while, but once they begin to show up in the public sphere, the impact is precipitous, as seen in the BJP’s thumping Tripura win

The defeat of the CPM in Tripura and the BJP’s thumping victory is a signal that this idea has serious political limits. Ultimately, without a steady incline in personal incomes—something that requires jobs and a vibrant growth environment—the political returns from entitlements diminish over time. The effects of this may remain masked for a while, but once they begin to show up in the public sphere, the impact is precipitous.

The other political effect of the BJP win is equally far-reaching. Tripura is the fifth state in the Northeast where the party has formed a government on its own or with local alliance partners. This has been viewed largely from the prism of the party’s entry into the region with an eye on the General Election due next year. This is no doubt an important consideration, but it would be a mistake to view the development from a mere geographic perspective. There is something deeper at work.

SOME YEARS AGO, one observer of India caustically noted that where the ‘Hindu’ political footprint ended, the writ of the Armed Forces Special Powers Act (AFSPA) began. With the BJP victory in Tripura, that observation now loses all validity. Four features mark this shift.

One, from Kashmir to Nagaland, political formations that were once sympathetic to secessionist political ideas or were in actual rebellion against India are now slowly but certainly being integrated into mainstream politics. From Bodo groups north of the Brahmaputra to various factional players in Nagaland to the Indigenous People’s Front of Tripura (IPFT), they are all under the BJP’s broad umbrella.

Two, conversely—and a bit more cautiously—one can say that these secessionist formations, by joining hands with a nationalist party, have concluded that their political aspirations and those of their followers are better served by working with a mainstream party that is committed to a united India. The IPFT’s partnership with the BJP is noteworthy from this perspective. At one time, in the early 2000s, this Front was backed by the National Liberation Front of Tripura or NLFT, an outlawed outfit that championed independence for Tripura.

Three, the evolution of these outfits from rebels to holders of minor concessions in the form of autonomous councils in Assam, Tripura and elsewhere, and finally to mainstream politics, marks an interesting arc. The entire process from rebellion to integration has taken an average of three odd decades. Much of the peace-making took place under Congress governments, but that is where the process stopped for a while. It took the BJP to reach out to these potential partners at a time ripe for their integration.

Finally, the developments of the last four years—from the BJP’s inauguration in New Delhi to the coalition with the People’s Democratic Party in Jammu & Kashmir to the win in Tripura—have come at a time of receding globalisation. Even a decade ago, small territories with unique endowments could hope to gain independence and join the world market as economic entities, earning enough to maintain the trappings of sovereignty: an army, some diplomatic presence and other paraphernalia. That option is now very difficult to put in practice. Perhaps it is too much to impute this to groups that are now allied with the BJP, but the background against which such agreements have happened is visible.

These are early days, yet. Peace has had many missteps in the Northeast and there may be problems ahead. Under watch, for example, would be how the BJP manages ethnic tensions between, say, Tripura’s Bengali settlers and its Tribals, apart from geographic contradictions between the hill people and plains settlers. The only arrangement that has seen some time elapse is the one between the BJP and the Bodoland People’s Front (BPF) in Assam, which has held for almost two years. Bodo groups, including the BPF, have at various times wanted to turn their territorial council into the government of a full-fledged state, a demand that is unlikely to go down well in Assam. Until now, the BJP has managed to tamp down such impossible demands. In Nagaland, a peace agreement has been signed with the National Socialist Council of Nagaland (NSCN), but the bewildering diversity of militant groups in the state makes it hard to implement a deal. The months ahead will test this.

The Northeast is a difficult part of India. Its geographic isolation has gone hand-in-hand with political indifference towards it. Even today, it is not unusual for the region to be referred in terms of a ‘mainland’ versus ‘Northeast’ distinction. The BJP has helped change that considerably. Its broad political ambitions have been commented upon, but if in the bargain the region gets the benefits of higher investment and economic growth, then surely the political effort will be well worth it.

Narendra Modi: Optimum Power
The Revenge of the Underclass