Modi in the Age of Rage

The art of thriving in adversity 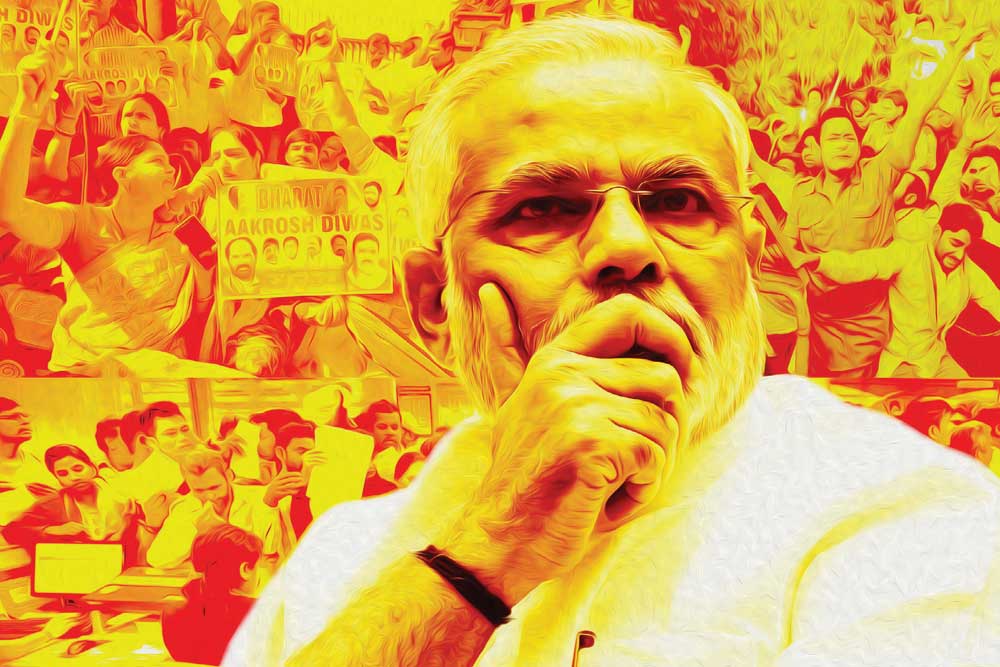 THIS IS WHAT we know: it’s not a good time to be in power. Politicians playing by the rulebook are being assailed by furies from the farthest provinces of resentment. Slogans no longer inspire the base because the grassroots have declared war on clichés: so think before you use the word ‘change’. We have also been told that truth died a sudden death in the ruins of politics-as-usual: so beware the evangelist wasting his eloquence on tomorrow. Yesterday is suddenly beguiling, and it looks like the future belongs to time-travellers promising to take us back to a place beyond memory and mythology. It is as if the so-called ‘power of the powerless’ has made the old ideological divisions redundant. The extreme is the new centre. It is not a good time to be a politician steeped in the certainties of the tribe. Still, every word of Narendra Modi is a reaffirmation that it is a good time to be the Prime Minister of India.

Out there, in the wake of the Government’s midnight massacre of Rs 500 and Rs 1,000 currency notes, the streets are angry, queues are not getting shorter, the champions of the shirtless have come out of hibernation, and economists of a certain ideological persuasion are pointing out the ineffectiveness of the effort to contain black money. Modi remains unfazed, and he stands by what he believes, and he keeps on announcing more measures to curb the evil he thinks hinders the economy and makes India increasingly unequal in spite of the growth rate. He still believes that short-term pain is a prerequisite for the larger good, that the simulated anger of the political class is not a reflection of what ordinary folks think. Anecdotal evidence from the quieter parts of the streets and the countryside suggest he is perhaps the only Indian politician who doesn’t suffer from a trust deficit.

Between the anger on the street, dramatised by the usual suspects still struggling to lead the orphaned opposition space, and the prime ministerial sangfroid lies a harsh political truth: the diminishing credibility of the satrapies in the corruption debate. No mobilisers of the underclass in demonetised India can win the argument on corruption because their backstories, in spite of their electoral success, bring out the worst traits of power. Set against them is a man for whom power provides no personal dividends.

That is why Modi, in the prime ministerial history of India, is a cultural shift which still remains incomprehensible to certain sections of India that continue to see him as an affront to their liberal sensibility. But Modi happened before the politics of resentment was as sensational as it is today. It was not the aggrieved Hindu who brought him to power, and it was not the word ‘Hindu’ that animated his argument for India either. The much-caricatured mascot of hard Hindutva won India by tapping into the anger of the underclass and the dreams of the youth, and he, unlike your average resentment reaper today, did not sell hate. It was malevolence and entitlement, as institutionalised by India’s oldest party, that he was raging against. It was an angrier time, and a regime retired from reality, headed by a dutiful doctor whose political power was rationed by higher powers, failed to read the popular mind. Modi found a voice more original than his party’s, and it was the voice of a man whose moral system did not abhor the possibilities of power. In a country where the pursuit of power was seen as a moral malady, he made no effort to hide his dedication to it in one of the longest campaigns in the history of Indian politics. He refuses to slow down even after the storming of Delhi.

IT IS NOT that, more than half way through his term, Modi has received full-fledged adulation from his formidable middle-class constituency. He has not been bold enough in liberating the economy from the last remains of the socialist model; his cautious, incremental approach to reform is not the way to gain his place in history; his silence as the rearmed lunatic fringe hijacked the cultural argument has been deafening; and his serial setbacks in assembly elections have diminished the mystique… acolytes, not necessarily hard-core fans, were showing signs of impatience.

Have we missed the good news beyond the headlines? Or, have we taken certain things for granted in Modi’s India? At least on corruption, we did. We did not even notice that there was not a single scandal in his administration. Till less than three years ago—have we forgotten?—we were living in a country whose official religion was corruption. Some of us even called it the UPA way of life. If there was a dispute, it was about the magnitude of it, not about the authenticity of it. It is a wonderful thing to happen in a country like India, cited more often as a perfect case study of the excesses of democracy: a quiet and efficient administration is, even if not so news friendly, something we are yet to come to terms with.

Modi has turned the aftermath of demonetisation into a sacrifice shared between the people and the outsider-ruler, and he never misses a moment to convince them that it is a sacrifice worthy of the cause. It is not a soulless nationalist at play; it is a dash of Gandhi

The other good news is a steadier economy, growing at a respectable pace despite bad signs from the global marketplace. This too we have come to take for granted, and it is not an interventionist state but an interactive one that has made the Indian economy, used to violent swings under bad politics, less fragile and reassuringly predictable. Modi may not have become a Reagan or Thatcher in the middle of 2014, but he provided the right atmospherics for adventurers to take the risk, start the unthinkable, succeed, or fail and start all over again. The regulation raj that came after the belated death of the licence raj saw crony capitalism thriving under political patronage, and Modi, without much fanfare, brought in the kind of transparency India has not experienced before. For once, the entrepreneur, the bureaucrat and the politician are partners in an honourable venture.

Modi, an irrepressible headline maker on the stump, is comparatively prosaic as Prime Minister, and thank God for that. And that is not something diehard Modiites have been expecting from their action hero. In his midnight launch of demonetisation, they got the big bang they badly wanted—or did they? It should not have come as a surprise from someone who was in the habit of turning banalised promises into reality— and a narrative-shifting political statement. The eradication of black money, periodically mythified in unverified reports of secret funds from proxy businesses, was one such promise. Until Modi, no government bothered to do anything serious about it; a convenient slogan, and that was it.

Two realisations have powered his midnight bang. First, this Prime Minister has rightly identified his primary war zone: the parallel India of unaccounted wealth. He could have been stoic about corruption and the pitfalls of an overcrowded democracy where politics can afford to be an illegitimate business. Or he could have shrugged it off as the Asian way of power sharing in which wealth, family and patronage are parts of an unbreakable matrix. Only the style and degree vary, he could have pretended, otherwise it is all the same. In India, corruption is more than an act of assisted thievery; it has become an institutionalised evil, and they are all in it together. Modi’s war on black money is an act of idealism.

Which brings us to the second: the power of the ascetic. It is his biography that provides the aesthetics of his politics. He is your 24/7 nationalist for whom power is a spiritual quest. Nothing else fascinates him as much as his own story as a subtext of the larger national narrative. This is the extreme manifestation of the conviction politician, permanently swayed by the possibilities of power. What makes him different from your average Hindu nationalist is that his idea of Akhand Bharat is not a unipolar Hindu rashtra built on Vedic/scientific temper. His idea of being modern may not reject tradition, but it strives to keep pace with the digital century. It is his sense of modernity and ethical governance that makes corruption a threat to his moral system. A leader powered by his own mythology, and a granite faith in his judgment, can be a dangerous choice for a democracy. When such a leader is fanatical about deploying his personal integrity to restore institutions in a much-abused civil society, democracy becomes a better choice of governance. Modi, unlike some of our provincial totems now crying for the cashless, is not a me-alone leader in spite of his overwhelming self-awareness; he makes full use of his personal exceptionalism as a leader.

It is this self-proclaimed ethical system that adds to his authority. And it is what allows him, even while being in power, to put himself on the side of the powerless, and not just rhetorically. In the age of rage, the insider is the endangered beast, the Establishment is the perpetuation of entitlement, and the angriest is the loser species in social Darwinism. Out there in the swamplands of globalisation, some people think they are the worst victims of an unequal world. Predictably, the old Left has already lost the constituency of the wretched. In the 21st century, it’s the rearmed nationalist who leads the revolution of the ghettos. In India, the cow belt socialists have kept their base more or less intact for a long time because they are better manipulators of caste. And the comrades, with their rapidly shrinking soviets, are nothing more than a whimper in the East and a tedious struggle in the south. In the last General Election, the nationalist shattered the old order of caste as well as class in the north, and it was, in the end, one man’s triumph over the dead weight of inheritance. He was the original outsider, and his call was for a renewal of power, not repudiation. Once in power, he has not abandoned the language of the powerless. He can be an outsider even in Lutyens’ citadel.

To reap the anger of the powerless, Modi knows he has to redefine power itself. He has turned the aftermath of demonetisation into a sacrifice shared between the people and the outsider-ruler, and he never misses a moment to convince them that it is a sacrifice worthy of the cause. It is not a soulless nationalist at play; it is a dash of Gandhi. As a political stroke, it could not have been more original. Renunciation was a preferred weapon of the Mahatma in his struggle against power. For the most powerful politician of India today, suffering is a prerequisite for the war against illegitimate wealth—and the wretched are listening from the longest queues. For someone who has learned to turn adversity into bestselling political statements since Gujarat 2002, the angry streets of demonetised India are an opportunity, particularly so when the protest is choreographed by politicians who dread new currencies of change. In India 2016, Narendra Modi has shown us that the shared rage against the bigger evil has more transformative power than the conveniently simulated rage against him. 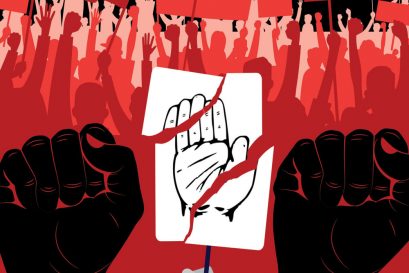 As the Congress vacates the space of an active opposition with a counter-argument, civil society activists and other professional dissenters rush in to fill the vacuum 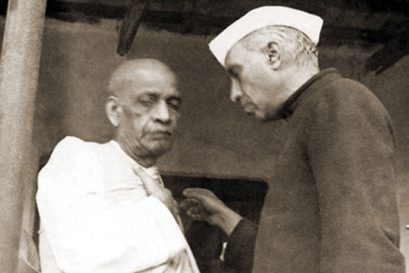 Crisis and the Congress

Rebels in the ranks 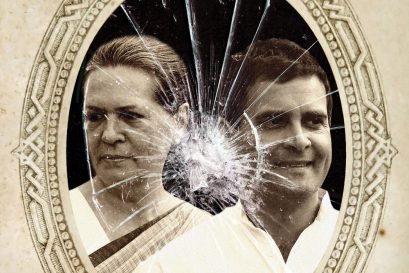 Sonia and Rahul Gandhi can have the satisfaction of a Pyrrhic victory. The party has formally reaffirmed their leadership, but it is seen as completely out of sync with the times